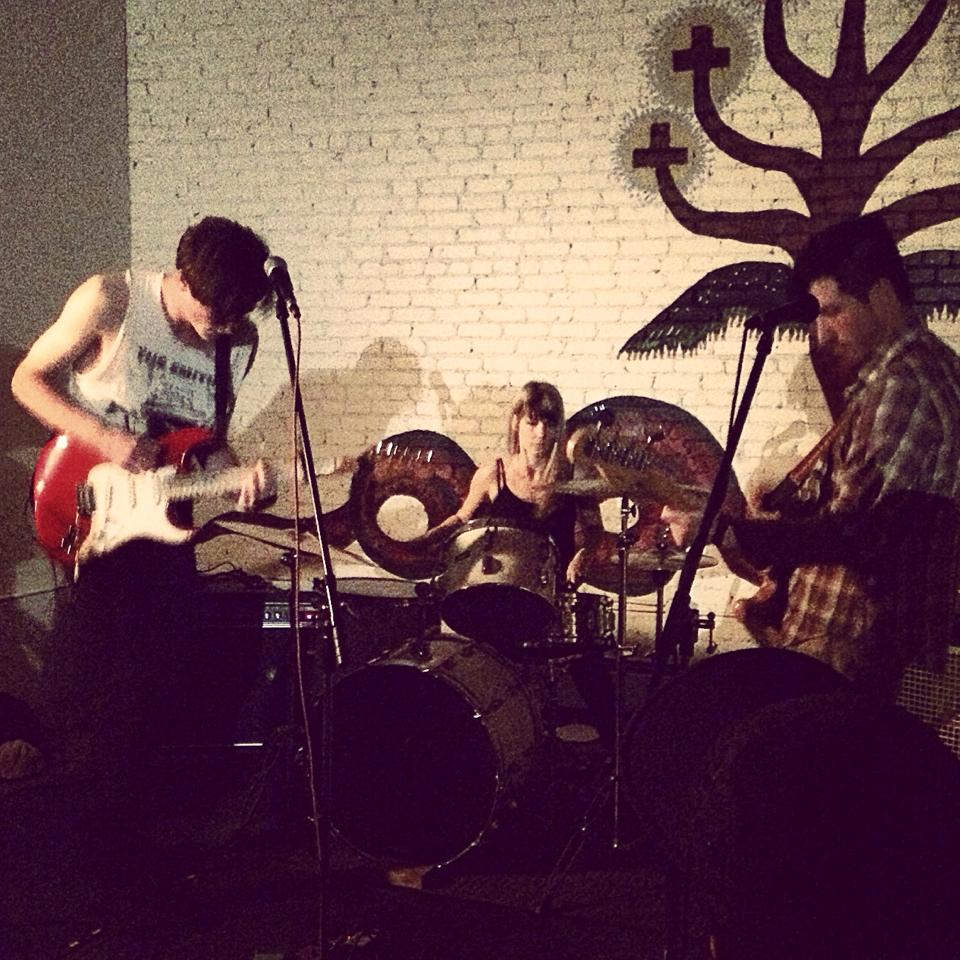 Awesomely Messy Rock: Getting to Know Way Out

We sure do love the bands of Providence. This time we’ve got Way Out – a psyched out rock group of three with a strong grip on the local scene and a strong sense of what the music mongers of the Rhode Island capital city want. Messy, bent-string guitar squiggles and the air-tight, authoritative rhythm section of this post-punk trio has us flailing our bodies about, trying to dance, while listening to their track, “Blood Moon.” Way Out’s reference-heavy rock is practically designed to catch the ears of rock nerds. And how enjoyable it will be. It’s nervy rock music that sounds like it emerged after punk’s first wave burned out in the late 1970s. Well, maybe. Either way you’ll like.

The most direct influences sound-wise are probably 70s/80s post-punk and deathrock/goth stuff… Bands like Wipers, The Chameleons, Wire, The Smiths, Talking Heads, Television, Siouxsie and The Banshees, Joy Division etc… I also love Bowie, The Ventures, and Nuggets-era garage/psyche.

Derek: Is there an answer besides pizza?

Mark: No Name at grasshoppers in Allston…. And pizza.

HOW WOULD MOM DESCRIBE YOU IN ONE WORD:

Anna: I can’t think of a single band guy crush I have! But I can definitely say I’m inspired by badass ladies who rock like Debbie Harry, Sheila E, and Exene Cervenka.

IF YOU COULD TOUR WITH ANYONE…

Tell us a little about your song writing process.

Derek: When we started Way Out a couple years ago, I had never been in a band, so I wasn’t used to collaborating with other people on music. I would write the songs in my room on acoustic guitar or keyboard and then try to translate it to this rock band format, which could be hit or miss. By now the chemistry has gotten so good though that Mark or I will just start playing a riff at practice, and a whole song can build pretty quickly from there. Our upcoming debut record kinda reflects that whole trajectory, with maybe half the songs dating back to that initial era of ‘bedroom-translation’, but I think we’ve grown into our sound enough at this point that it all just sounds like Way Out.

Additionally, we now have Anna locked in as our full-time drummer, and all the new stuff we’re working on feels really focused and cohesive– I’m already getting psyched on record #2!!!

What’s is like living and creating in Providence? It’s such a tiny yet culturally rich place.

Derek: Providence rules. I could ramble about it forever. It’s a beautiful city aesthetically, and the art/music community is insane. People care a lot here. Creativity and authenticity feel championed here in a way that I don’t necessarily get the sense of in a lot of other cities/communities. People are open to the Weird… It’s a great place to hone your craft. Plus it’s cheap and there are tacos everywhere.

Who designs your sweet logo?

Derek: I designed our band emblem, and in the past I would just whip up designs in MS Paint or whatever based on found images from the internet & TV. Imagery dealing with the supernatural is pretty big for me. My friend TJ Antaya did the artwork for our record, which I’m beyond stoked on. His work is all over instagram: @birthwort.

When can we expect some new material?!

Derek: Our debut record should be out by the end of the summer! It’ll be out on cassette and available digitally at on Bandcamp, with hopefully a vinyl to follow once we find the right label.

For more Way Out check out their Facebook page.