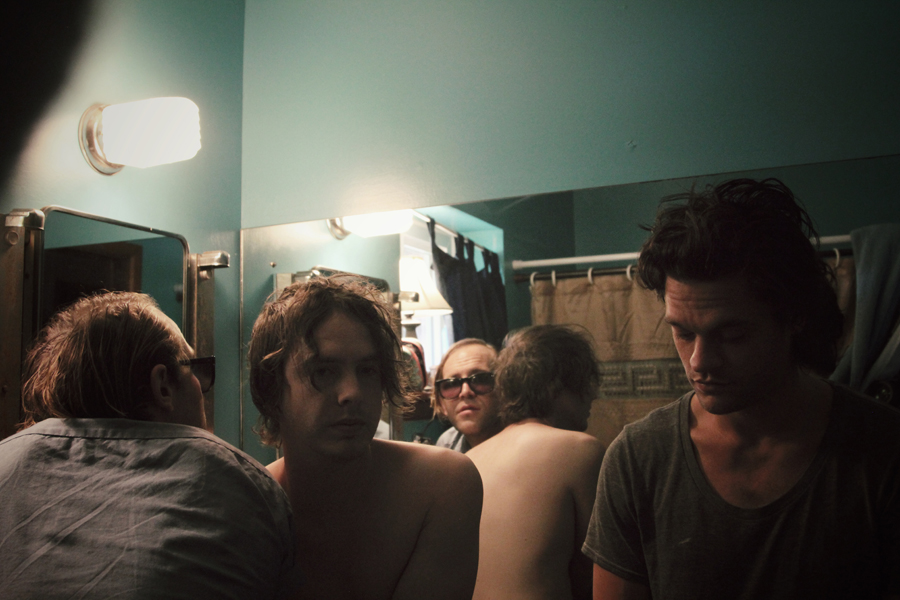 Since hearing garage-punk outfit BRONCHO’s fiery, feisty debut “Can’t Get Past the Lips,” and realizing the now rock trio were more than just some undistinguished Midwestern band, we’ve been anticipating their second spin. With production decidedly sleeker than the band’s debut, “Just Enough Hip To Be Woman” explores the hallmarks of their blazing sound – fuzzy, guitar driven rock – but in an irresistibly glammy, yet gritty 70’s punk way.

Powerful songs like the album’s single, “Class Historian,” and “What” gleam with simplicity, but BRONCHO’s musical execution make the 11-track album fantastic, and seemingly engineered to stick in your head. Think of the “Just Enough Hip To Be Woman” as a raw and extremely high quality recording of a garage band practice. Amadeus got a chance to talk with lead singer, Ryan Lindsey, while the band was in the midst of their ongoing nationwide tour, about band crushes, a spiritual experience in Santa Monica, and time traveling to get their new sound heard on this album.

The production and energy of “Just Enough Hip To Be Woman” is certainly more sleek and somewhat moves towards a more polished rock album; was this an intentional progression? Or did it just kind of transpire organically?

It was intentional at some point, but we wanted the transition to be as organic as possible. We recorded both records pretty similar. The difference is the way we mixed down the records. We hit some better tape machines in the end on this record. The first record was mixed down to a nineties model Kenwood home stereo dual cassette.

A sophomore album is a make or break for some bands. You know, the whole, ‘can they pull it off again? will this one be as good as the first?’ What were some of your guys’ biggest concerns about this second album? If there were any. Were there any things in particular that you knew you guys wanted to do with this new album?

We wanted the record to resemble our childhood, and being kids of the 80’s and nineties I think we drew a lot from the music of those eras. There’s a warm quality that happens in that pre-digital world that makes us most comfortable. We wanted to go back in time I guess. I’m always in search of time travel.

How did the songwriting process go for this new album? Read that you guys aren’t the most serious when it comes to lyrics and often will be jotting down lines while in the van on tour. Is this still the case?

Very similar to the first record. It was a mix of songs I brought in, and songs that we played together and figured out live prior to recording. Some songs need a studio to make sense of, and some just need a show.

You guys have spent a lot of time on the road, and have a huge tour coming up, what about being on the road do you guys find inspiring? What’s the most random thing you saw, heard or picked up on the road and that somehow made it into one of your songs?

Our spirit guide Larry took us to Chez Jays in Santa Monica and gave us an experience that we’re still working through. “It’s on” is one place where we are working through it.

What’s it like in the studio or during recording with you guys? I assume that you would much rather be playing to an audience and live, than in a stuffy studio.

We love the studio. We probably talk more about studio ideas than live ideas. I need the mix of the two though. We need both the studio and the stage to keep our attention. As far as recording goes it’s a mix of keeping things natural in the studio, and overanalyzing everything.

Who/What are some bands that you guys have crushes on and are listening to right now?

Low Litas, every song speaks deeply to me. I definitely have a crush on them. They’re in BRONCHO now too, and opening for us as well. So, I get to hang out with them a lot, and work through it all.

Any where you guys are particularly excited to go on this tour?

We were really excited to play Maine on this tour, then we realized the abbreviation for maine is not MA, so now we’re pumped to play Massachusetts! We’ve never played there with BRONCHO. Can’t wait!

You guys are playing some shows with Brand New and Joyce Manor, how did you guys get connected with them?

They needed someone to play first, and that’s something we do really well. Also, our best friend Brady is brand news’ guitar tech