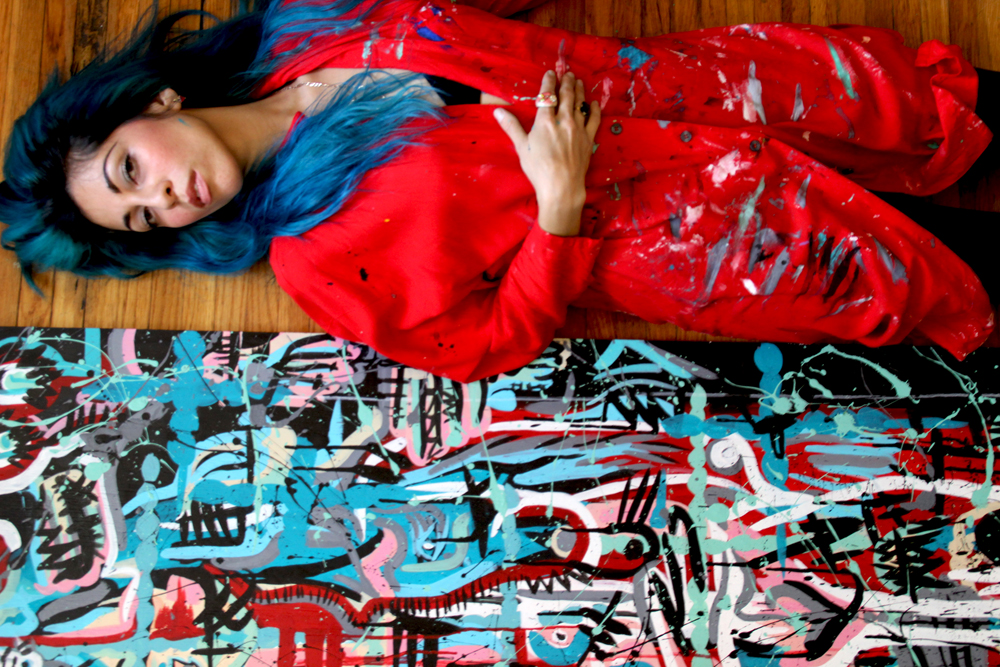 It’s late at night. Nathalia Pizarro is in her house in Los Angeles, which also doubles for Manimal Records’ central office, probably gulping a cup of coffee in between cigarettes and short periods of silence that take place between the Brazilian psych song that she has playing on repeat. Pizarro works fast, leaving no time to judge the wild, yet cohesive abstract paintings she cranks out.

For Pizarro, also the leading lady of Vancouver’s rock-soul darlings, Chains of Love, there is something in the unexpected quality of differing sounds that nicely accompanies painting. Her paintings translate the same energetic style that you would encounter during one of her band’s 45-minute sets, with splatters and drips that bring in an unpredictability to each of her pieces. Pizarro throws herself into every piece, working quickly, on the floor, and being physical with the art that she is creating. Pizarro attacks every slab of wood with slews of paint and the utmost of intent, something that seems to be lacking amongst others; a lack of attack and intent.

You’re originally from Canada, but now live in LA. What do you love about each place?

In Canada I love the space, and growing up on the outside of Edmonton, I remember as a kid enjoying space. I feel like that is really inspiring because there is such a lack of anything. You try and create to fill that space.

In Los Angeles, I feel like it’s the opposite. There isn’t any space. For me, it’s been a process of stripping myself down and then starting from there. On a topical level, LA is a beautiful place and filled with a lot of really interesting people, a lot of charisma here.

Do you find the city and the people who inhabit it affect your work in any way?

Yes and no, I feel like it’s my duty as an artist to be as nonjudgmental as possible. I try not to let other people’s words, work, opinions, or statuses affect me in any way. I am very blessed to have two people around me in my inner circle that have kind of been able to guide me in a lot of new ventures introduce me to a lot of different mediums. One is Nick Egan and one is Paul Beahan, who is my partner with Manimal Vinyl. They have been really great inspirations for me to not judge myself and just do something completely different.

We know you’re the leading lady of the band Chains of Love, but has painting always been a part of your life?

Yes definitely. I took a really heavy break though and stopped painting when I was 22. I just stopped, I don’t know why, it wasn’t a conscience decision. Then here in LA I kind of started out of necessity. I felt a lot of rejection on the musical side, I started doing things and getting a lot of “NO’s.” You know, as an artist I feel like you have to make stuff, otherwise a little piece of your soul dies. My roommate, Jacqueline said, “Nathalia, I think you should start painting again.” And I was like, “Really?” and she said, “Yeah, let’s go to the art store right now.” Then it all started from there. Within four hours I had a new piece already, and she was like, “Oh well, welcome back!” Since then it’s been mostly painting. Now I am working towards putting on a show in August.

You mentioned Nick Egan, I know you are collaborating with him soon, what will that entail?

We wanted to start an art collective, and Manimal has this grand idea of doing a production team/art collective that will help facilitate video and content for our artists. We were thinking of doing a number of things though: whether it’s a series of portraits, or putting on a dual show – he’s an incredible artist – maybe do some clothing, it’s kind of open-ended. Nick makes some wonderful shirts as well so we’re thinking of doing some cool shirts….or uncool. They can be totally uncool as well. He just turned out to be a really incredible muse for me.

Tell me a little about your process? What’s it like in the studio?

For some reason, I can only paint to Brazilian psych; everyone has their thing. My roommate can only paint to jazz or Balletto. It has to be on: old, classic 60s Boleros, and beautiful jazz. I am the same, but I am always drawn to this ethnic quality. I know there is an ethnic quality in my work—since I am Spanish—that definitely shows through my work. I am a big fan of my heritage and for some reason it is important to me to listen to that type of music. I can’t listen to a lot of contemporary music, and I feel like most artists will say that music is everything in their process.

You’re a musician, but you’re also a painter, how is creating music different than creating a painting?

With music it’s a much heavier process for me mentally. I feel like music is an unrequited love for me. It’s a very romantic process, a lot of hurt involved, you know, cleaning the pipes. A lot of my life experience goes into my music, and it’s driven by a lot of deeper emotional issues for me, so it’s not as soothing. Also with music I’m involved with a band; I’m involved with a producer, with an audience. Therefore, there is a lot of ego involved just by default. I feel like it’s almost narcissistic; it’s a performance.

You mention there is definitely an ethnic quality in your paintings, can you elaborate?

I definitely use a lot of color. I like forms, portraits, and I really enjoy cubism. I love using a lot of color and kind of abstracting forms, which I guess could be related to ethnic work. I have never called myself an ethnic painter, but I have had people say, “Wow that really brings a lot of Aztec vibes,” or Picasso, and it just gets lumped in, for some reason, to being ethnic.

Seems like a hard thing to articulate when you’re talking about your own work.

Yeah it definitely is. What is ethnic right? It’s an artist like Basquiat that comes along and blows up the scene and he’s labeled so “ethnic.” But why? Is it because he used so many colors? What is it about? I don’t really know how to answer that question.

You do use a lot of color, and I feel like you use them in a way that isn’t overly convoluted or overly saturated. Where do you draw inspiration from for color palette?

Recently, for inspiration I’ve been trying to challenge myself. I have been looking at a lot of contemporary work and it seems like everybody is painting in beige and brown and earth tones. Everything I see is very, very minimal. I feel like my work is a Pucci dress in a room of COMME des GARÇONS.

Seriously I was like, “Wow, ok this is really different.”

With my earlier stuff the colors were inspired by the notion of choosing colors that people wouldn’t necessarily choose—using a lot of red. I think I read somewhere one time, “Dear Painters, if you want to sell work, the majority of paintings that do sell are in light tones.” So me just being a punk, I wanted to do everything dark. Fuck it; I’m going to make this painting in aqua and fucking red. So a lot of inspiration is just trying to use colors. I am a fan of the monochromatic style, simple line drawings, but I am trying to take from what is there in me and channel something else.

Have you seen any similarities in your most recent paintings?

Lately it’s been a little bit more minimalist and a little less frantic. My older work is really detailed graphic prints covered in contrasting splatters and drips. My newest painting is rougher around the edges; it was an exercise for me to not perfect every line, so there is a lot more rawness to it. The next series that I want to do is some glass painting. I want to do a series on glass. Glass is like a mirror, so when people are looking at the painting they can see themselves in the painting as well, which is something that I have been thinking about.

How did this idea come about?

This came up through Nick Egan. He was the one talking to me about concepts and ideas and we were just going back and forth. He was saying that we should try something like this. I haven’t done a series, I’ve just been pumping out one piece at a time, but I think it’s important; just like a record, it’s nice to do a single, but it’s nice to do an EP or an LP as well. So I think I am going to shoot for an LP in the painting world here.

What are you currently listening to, collecting, watching, reading?

What’s are some really bad movies that you absolutely love?

Thanks to the visual mastermind, Nick Egan, for all the wonderful photos that accompany this article. 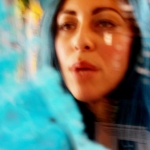 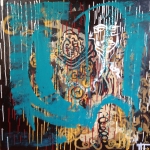 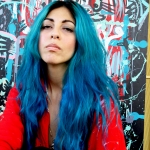 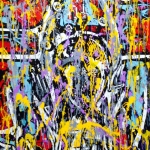 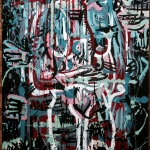 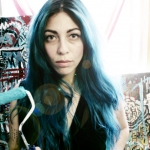 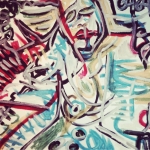 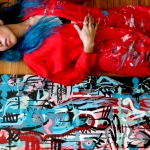 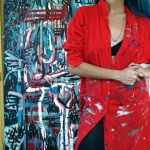