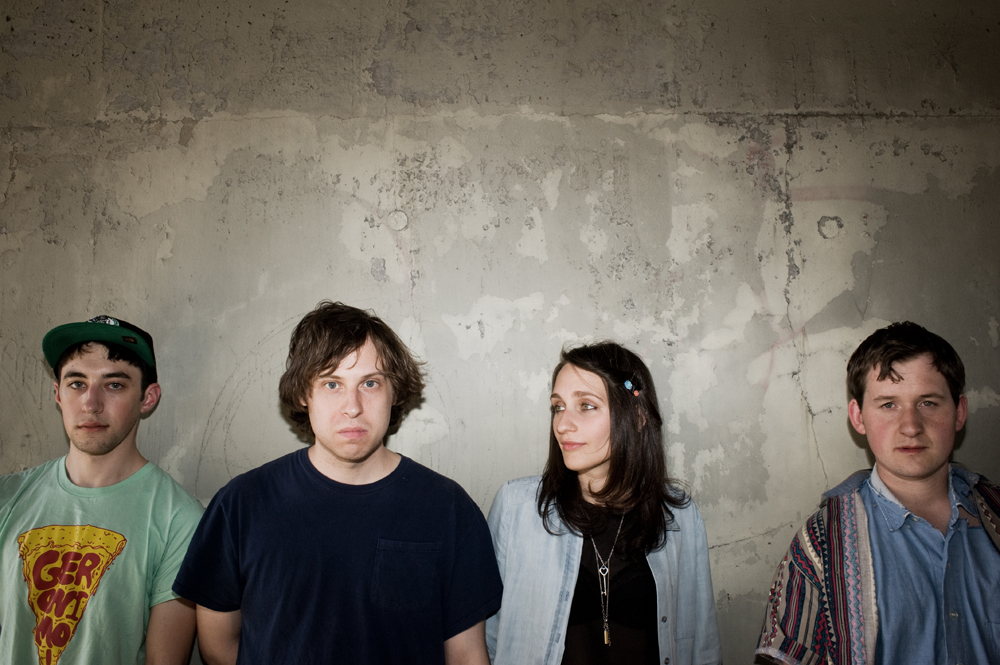 Since their self-released mini jam in 2012, Taylor Swift b/w Swim Fan, Speedy Ortiz has had little reason to slow down. The indie lo-fi rock band of four has reached every corner of The States, now stretching to Europe and Asia with the release of their latest EP, Real Hair, which has a bigger sound, pop-conscious vocals and the same rad hand-made cover art.

While Real Hair is comfortably familiar, it’s no carbon-copy of what their debut full-length Major Arcana brought us last June. It embraces some different songwriting qualities that provide a distinction from what has come before, and their musical progression doesn’t come at the cost of sacrificing what has made Speedy Ortiz so appealing to date: loud, intricate 90s-fuzz guitars and Sadie Dupuis’ sharp lyrics and vocals.

Aren’t you guys & gal exhausted? You’ve been touring non-stop. What are some unusual pros and cons of life on a tour bus?

Mike: Yeah, we’re pretty exhausted, mentally and physically. We’ve done all of our North American tours in a nerdy looking soccer-mom-style minivan, which has been helpful at the border checks, so there’s pro #1. Not that we’re transporting any dead bodies or immigrants or narcotics, but the wait can be annoyingly time consuming. There’s also no shortage of cup holders and phone chargers, and it’s surprisingly comfortable. As for the cons, depending on the time of year, it gets tight with luggage and blankets, so there’s really only room for the four of us. Also, the button-operated doors can get kinda choosey about whether they want to close all the way.
Sadie: Pro: When people who let us sleep on their floors have cool dogs. Con: I don’t get to see my dog.

How will you prepare for your upcoming international tour? Are there any touristy places/things you’re looking to do during down time?

Mike: I’m assuming we’ll all be resting as much as possible in order to avoid a big burnout. The touristy stuff is mostly determined a day prior depending on what time allows, so I don’t think we have any big expectations. I think we’re mostly just excited to finally attend Primavera and see Slint.
Sadie: I studied abroad in Spain, so I’m hoping to revisit a couple of my collegiate tapas haunts.
Matt: I’m excited to go back to Ireland and to the Mediterranean coast of Spain and possibly France, for the light, the light and the air!

Collectively, who are some musical heroes? Do they influence your sound as a band and how?

Mike: The bands who continue to inspire us the most are the ones who are currently active in our own scene.
Sadie: We’ve been able to tour with a lot of our heroes too, from local bands like Pile and Grass is Green to bands we’ve looked up to since we were kids, like The Breeders and The Jicks. I think we learn a lot about working together as a group from seeing these bands every night on tour.

What’s the writing process like? Is the first draft all on Sadie, or is it a collaborative process?

Mike: Yeah, the first draft is all Sadie, followed by collaborative arrangement.
Sadie: I usually write while recording a demo, and then we learn from that.
Matt: And arrange/change parts as needed.

Sadie, how does your work as a poet differ from the writing you do as a musician?

Sadie: The better question is how do those things relate, and the answer is that they don’t.

You guys are touring internationally, headlining major venues, and getting a lot of attention from a lot of different outlets, do you guys feel like it’s been sort of a natural inertia towards these successes? Is it surreal?

Darl: A bit of both. It’s definitely surreal to be playing with The Breeders or Stephen Malkmus & the Jicks, but it feels natural that our own audiences in places such as Chicago or San Francisco have grown since we began touring.

Tell us about your EP Real Hair, when was this written? Seems like you guys cranked this out pretty quickly after Major Arcana.

Sadie: I wrote some of those songs in May and June of 2013, right before we released ‘Major Arcana’ and went on a long U.S. tour. We re-visited them in the fall and recorded them in a 2-day session. So yeah, I suppose it came out pretty quickly.

Where did some of the inspiration for this EP come from? any obvious influences?

Darl: All of my inspiration came from Connery, the bassist of Pile and featured model on the cover of our EP.

What are you guys listening to currently?

Who and how and why do you come up with your track names?

Sadie: I generally title the songs. I like the idea of a title as almost a forward to the song and almost never pull titles from the lyrics, because I think they should be their own distinct thing. There’s nothing more boring to me than a song title that’s repeated a thousand times within the song.

Any Boston bands you guys are particularly fond of/we should listen to?

If Speedy Ortiz could go back in time and write the soundtrack for your favorite 90s film, which would it be? What would it sound like?

Mike: I don’t think we would fit on the Gummo soundtrack unless we started working on some new blackmetal jams. The ’90s soundtrack where we’d probably fit the best would be some corny big-budget thing like Space Jam or Batman & Robin.
Sadie: Grosse Point Blank. But wait, maybe that’s all ’80s stuff.
Matt: Trees Lounge.

For more from Speedy Ortiz check out their live journal.