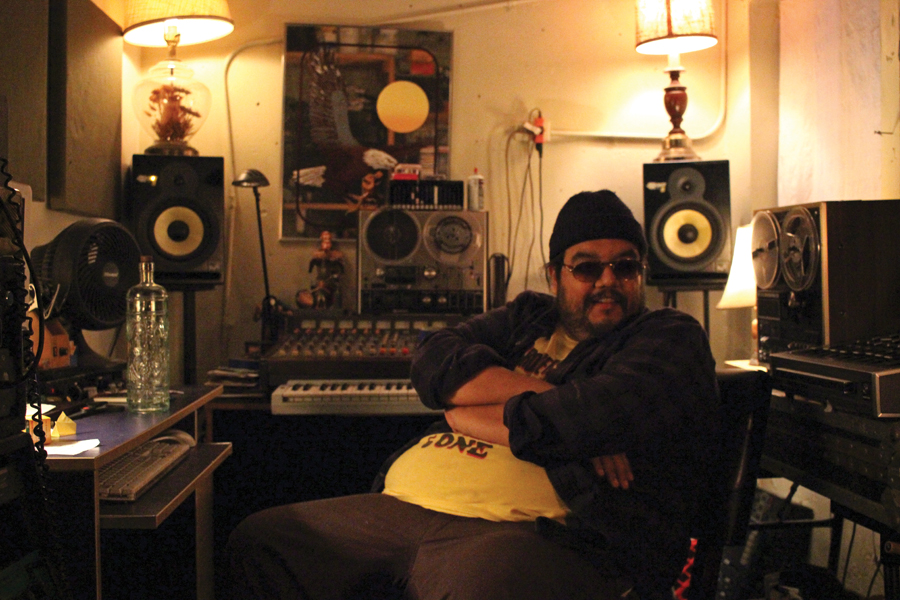 The Underspoken Genius of Joel Jerome

Jerome’s all smiles today. He’s just played an electrifying set at Viva LA a couple nights ago and the vinyls of his newest LP Psychedelic Thriftstore Folk – packed with features that run the spectrum from longtime bandmate Miguel Mendez to his brother Kevin Morales – have finally arrived. It’s a singular achievement for a LP, and one that could only have been pulled off by Jerome, who over the last 15 years has gradually become the go-to recording guru for LA’s most talented emerging artists. It’s also a world away from where he started, growing up in the South Bay of Los Angeles in the 90s on a strict diet of lo-fi pop.

“It was actually a pretty cool time, that was when the entire bedroom, lo-fi recording stuff started happening,” remembers Jerome.  “I was being heavily influenced by Elephant 6 – Neutral Milk Hotel, Of Montreal – and music that was based on four-track recordings. Mostly people recording their own thing with a lo-fi vibe, but still experimenting with pop and Beach Boy type sounds. I remember 1996-2000 was basically back tracking through the periods and seeing who influenced the people that were influencing me.”

In what is perhaps his most clichéd moment, Jerome names the most gargantuan of pop bands, The Beatles, as his biggest influence. “I got my hands on the Beatles Anthology and it felt like I was there,” says Jerome. “It deconstructed this mythical band. To this day, I like that more than the formal band. I got into that for two or three years straight. Those years were definitely formative.”

At a time when pop music has seemed to lose all soul, Jerome’s songwriting and recording stand as the last bridge between heart and pop music that is pulled off well. Enter Psychedelic Thriftstore Folk. A culmination of reworked and never before released songs that Jerome handpicked from his extensive catalog of recorded tracks – many of which have never been heard by anyone outside of the cozy confines of his studio.

“Records are so weird for me because I don’t write a batch of songs and then record,” explains Jerome. “I’ll write one song today, three songs next week, and maybe some the next month. For this record I went through stuff I have released and stuff I haven’t released. There was no specific group of songs I was trying to piece together, and most of the record is a lot of back catalog type of songs. I’ve found that the traditional twelve songs to a record just isn’t how I want to do it. I’d like to do a 7-inch single every two months with two songs and then at the end of the year collect them all and release it as a full-length. That would be perfect.”

There’s no doubt he has enough music to do so, however Jerome claims he’s just working on building the audience for that type of album model. Which, with his most recent coupling with well-known LA indie labels like Manimal, Burger, and Lollipop Records and recording several of their prodigious bands – La Sera, Cherry Glazzer, Froth, Mystic Braves, Tête, L.A. Witch, Santoros, Mr. Elevator and The Brain Hotel and Tashaki Miyaki – he has become a fixture to the current LA music scene as young bands can no longer relate to the mainstream music industry.

“I want to be that person that helps a band do their first EP, the one that carries them further,” says Jerome. “When they come to me it’s because they need something to sell at shows. The music business has totally changed. Digital stuff has changed things, and labels throwing money into a band doesn’t happen anymore. That’s an archaic model. I’m thriving because I’m not trying to overcharge, knowing a band can’t pay anyway. I work with bands on sliding scale for recording; I learn from them and I give them something that I think they’re going to enjoy.”

Jerome’s collaborative and overwhelmingly supportive practice surely reflects the already budding communal musical climate brewing in LA, which he now finds himself at the helm of.

“All these younger bands that I’ve been recording are heavily influenced by the 60s. It’s cool they’re seeing the beauty in old school music and sounds. Everyone is supportive and cool with each other,” says Jerome.  “It’s a punk rock thing from the 60s and 70s, even the 90s. Everyone is playing with each other, doing releases together. Everyone gets each other and the Internet is exposing people to things they never would have heard. It’s a really communal thing in this area. These guys are really helping each other out. It’s how I get so busy; they all talk with one another, and they all sound different. It’s DIY, but it’s also hippie, like, “Let’s do it all together.”

For more from Joel go to www.joeljeromemusic.com.