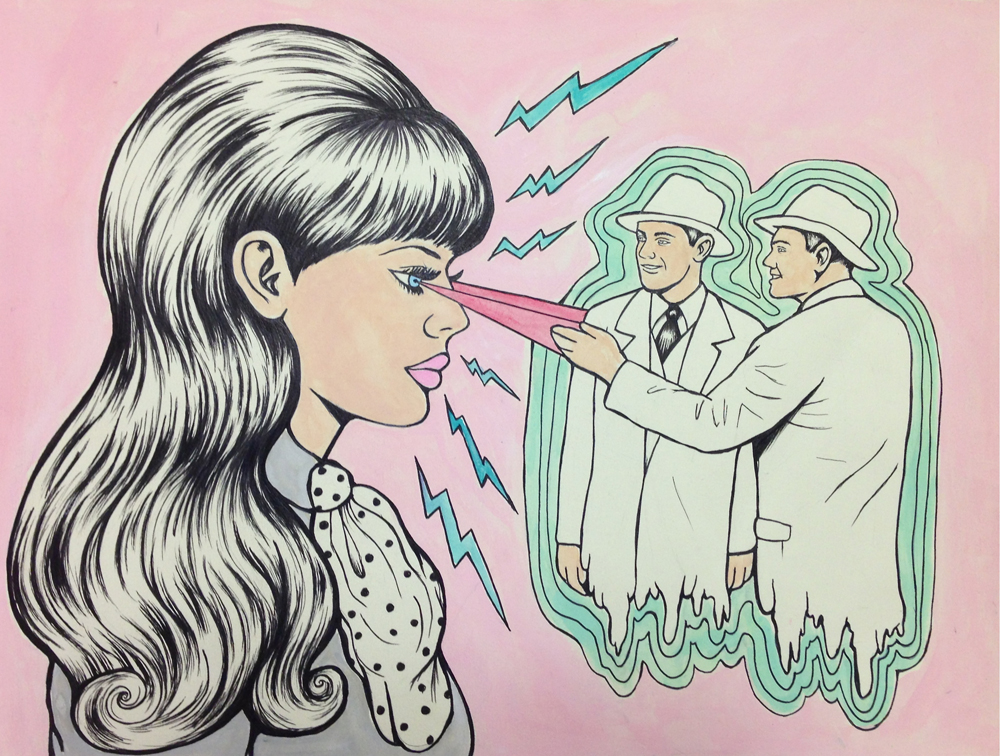 Flawless big hair, pearly-white smiles, perfectly pressed slacks, and brightly colored tweed dresses; just a few things you might see as you graze through a lifestyle or teen magazine from the 50s or 60s. Couples that politely embrace one another in Schlitz beer advertisements evoke the same splendid imagery of the seemingly loving parents, old fashioned values, and overwhelming amount of innocence and naiveté that flooded the screen during the 1998-flick, Pleasantville, about the all-too-perfect family dynamics of that era.

But the forced smiles and posed scenes found in the advertisements and on the covers of these vintage magazines don’t reflect an accurate portrayal of what American life was really like during that era. In fact, sizable feelings of unhappiness, gender repression, and a crippling pressure to succeed plagued this period in American history.

Illinois-based illustrator, Sophie McMahan subverts these picturesque images of suburban whiteness with green, swamp monster-skinned characters, drawn in daggers, and strained smiles that make her comics and drawings introspective and more congruous representations of life during that time. Her impressive drawing style works as a critique of American life – one that is still overly obsessed with ideals surrounding beauty and happiness, and continues to fuel underlying sentiments of heteronormativity.

Have you been drawing all your life?

I drew a ton when I was a child – comics and weird, crazy drawings – but then I kind of lost that in middle school. I was studying art history in college and discovered Daniel Clowes’ work in a small alternative comic book store in North Carolina. I saw his book “Caricature,” which is like a compilation of some of his strange stories from his comic “Eight Ball.” A switch kind of flipped after that, and I decided to go back to doing art and comics.

What is it that fascinates you about American culture in the 1950s and 60s?

I’ve always just been drawn to that era. The hair, the clothes, aesthetically, I think it’s so beautiful and so fun to draw. I find the images to be so weird and inspiring. The people and everything pictured are all so in place and happy and perfect, that it’s kind of creepy. There’s something about having everything be so perfect that kind of makes me want to pervert it somehow. I have this urge to mess it up: this perfect, perfect image that they try to convey.

Life was definitely not as beautiful and perfect as they present it in these images. So that’s something I kind of feel drawn to. It’s like when you put on a happy face even when you’re not feeling it. There’s darkness everywhere, even in perfect images.

You must have stacks and stacks of old magazines.

Yeah, I collect a bunch of magazines from those decades – lifestyle magazines, pin-up magazines, and teen magazines.

Where do you go to find these?

I live in Central Illinois now and there’s a ton of amazing thrift stores. Some of them have piles of teen magazines; those are some of my favorites from the 50s and 60s.

We love your Bizzaro Beauty comic, take us through how you go about making your comics. Do you conjure ideas up and write them down and go back to them later, or does it kind of just like come out spontaneously?

Ideas float around my head for a while and then I kind of write them out briefly. My comics are definitely more image-based than word-based. So I kind of draw really rough thumbnail sketches, then I just kind of dive in. I re-appropriate images that I find in these magazines, or wherever, and I kind of make them into my own and distort them how I want them in the story. My last comic wasn’t even originally intended to be a comic. I just decided to look back through my journal and piece together some thoughts I was having, or dreams. The beauty queen, prom queen comic was one that came from a dream. I remember she was smiling so hard that her teeth popped out.

That’s one of my favorite things to do. The art supplies store I work for is in this kind of strange mall, so there’s a lot of mall-walkers and just really bizarre characters that come around. I’m drawn to observing these interesting characters. I love people watching

I have a couple new friends who have this insanely amazing movie selection of tons of weird, old horror movies, like bad B-movies that are actually amazing. This weekend I watched a movie called Teenage Gang Debs and another called Teen-Age Strangler from the early 60s that are full of really wonderful 60s imagery and scenes.

I’ve also been super inspired by Russ Meyers lately. He did Faster, Pussycat! Kill! Kill!. One of his other movies called Beyond the Valley of the Super Vixen, the women have awesome big hair, big boobs, and there’s lots of bright colors from the 60s. These movies have been pulling me closer to the 60s, with even bigger hair and a little bit brighter colors.

You depict a lot of seemingly strong and badass women in your drawings. In your opinion, who’s the most badass chick? Dead or alive? An actress, artist, anyone you look up to.

That’s a hard question because I’m obsessed with so many of these women. But I guess the most badass one would have to be Tura Satana from Faster, Pussycat! Kill! Kill!. In the movie she is like the lead girl who drives fast cars and goes on a murder rampage. She’s incredible. I think Elvis proposed to her at some point in her life and she was an amazing, amazing woman. She died recently, sadly. But yeah, she’s the lead lady in that movie who does a lot of kicks and killing and all kinds badass stuff. 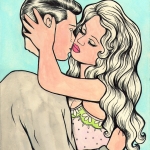 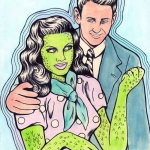 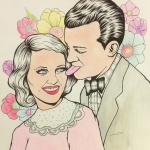 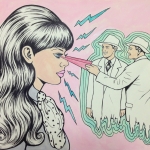 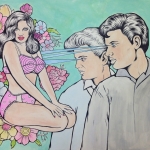 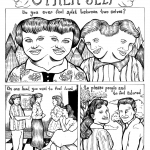 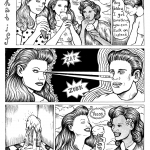