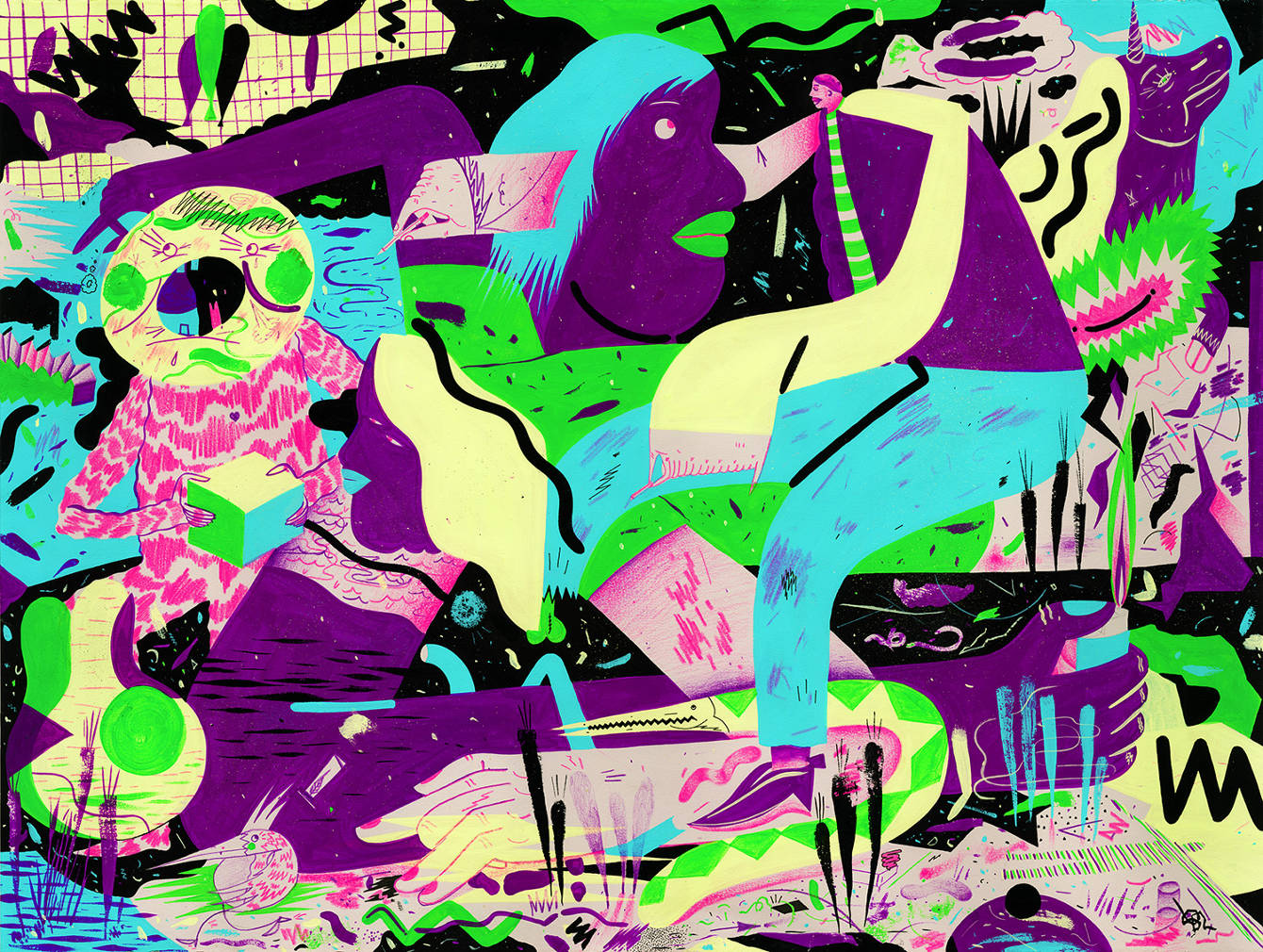 Welcome to 2014, where we hashtag our feelings and upload our work. Nothing is sacred, nothing is static—even, dare we say, art. But then we meet artists like Eddie Perrote, artists who wholly embody their work with integrity and license that no web presence can mimic.

The triple threat artist—“ roughly 60% Illustrator, 30% designer, and now 10% animator”—is a proponent of envelope pushing, intertwining aspects from each of the three mediums to heighten his artistic application both physically and conceptually. With layered colors, media and approaches, Perrote has created and filled his own void, articulating untold stories with engaging and visually euphoric treatment.

Not to mention Perrote is a freakin’ zine machine, boasting DIY names like Spring Brk, The Alphabet Zine, No Bummer Summer, You Can’t Take It With You and Everywhere West. He also keeps up a happenin’ blog presence alongside friend Leanna Perry called Hella Nasty, highlighting inspiring things, people and places from which to pull and push the artistic boundaries further.

Recently uprooting from Minneapolis and heading for NYC, Perrote is in his fervid element—in the eye of an artistic storm—and utilizing his inspiring surroundings to explore and employ fresh tones in his deviceful artistry.

Give us the Eddie Perrote spiel. Who are you? What do you do? What was your favorite television show growing up?

I grew up in the midwest, went to school in Minneapolis and I just recently relocated to NYC in November. I consider myself to be roughly 60% Illustrator, 30% designer, and now 10% animator. I push myself to work seamlessly in many different formats and disciplines to continue exploring the versatility of the work that I make. I love painting, drawing, letters, shapes, colors, anything related to image-making, and all things bright and shiny. I recently stumbled upon Captain Planet and Mr. Body again – which are amazing. But my all-time favorite TV shows growing up were a three-way tie between The Magic School Bus, Mr. Rogers Neighborhood, and Reading Rainbow. I think Reading Rainbow could still be my favorite show.

When did you start making art seriously? What was the driving force behind that?

I started making art that I thought was serious in high school and I went to state school for a year in Minneapolis, quickly realizing that I wasn’t going to get the art education I wanted there, and made the daunting decision to go to art school. By sophomore year I was sick of making work that I was embarrassed by, and wanted to figure out how the way I thought and felt could be represented visually without having direct influence or stylistic stimuli. So I lived in a studio by myself for two years (sophomore and junior years) without the Internet to really figure things out without any distractions. It was amazing at the time but let’s face it, we all need the World Wide Web at this point.

We are huge fans of funky typefaces and hand-painted script lettering, and it seems like you incorporate a lot of varying and awesome lettering and scripts in your pieces. Have you always painted or illustrated weird and unique lettering?

I got into art through a love of graffiti when I was a lot younger – not street art and characters, but graffiti which is strictly lettering. Particularly the use of type as imagery and it’s functionality of involving the viewer in such a way to prompt difficult-to-read letters through intriguing and beautiful visual characteristics. Since then, my love of lettering has become a passion to the point that I can’t help but notice every single odd sign and janky hand-done typeface – which are what capture my interest. I feel that in the age of digital sterility in which we live, there has never been a more important time to relish the immeasurable capacity that the human hand, and human errors have for emotional and specific communication.

If I were a cartoon, or if I had to pick an existing cartoon to dress like? Skeeter is pretty sick, any of the Rugrats characters were stylin’ too, besides Tommy. Otherwise all stripes and black and white grids with neon accents.

Do you collaborate with other illustrators? How does that process work? What do you love about the collaborative process?

The majority of collaboration that I’ve done consists of hanging out with other illustrators and talking about freelance jobs, concepts, and new tricks that we are trying and how weird we all are. I’ve done some collaborative murals for an exhibition with two of my best friends, Bill Rebholz and Leanna Perry, and I always love working with other creatives to see how the work goes in directions I never would have thought of/been conscious of on my own. I also collaborated on an animation during an internship earlier this summer that involved a high level of attention to detail throughout the process. Collaborating on everything from initial conception, to illustration of various elements, color pallete, and constantly passing off files to one another – managing to not save over anything.

You’re like a zine/book machine with all these printed works like Spring Brk, The Alphabet Zine, and Everywhere West! What is it that you like about zines? Is it the process or the tangible piece?

Thank you! I think that it’s both – I love the process and the level of craft that’s involved in making books and zines, particularly small runs (all of which I’ve personally stitched, stapled and trimmed). I also think that nothing beats the feeling of a heavy stack of new zines that you’ve just poured your heart into – that you can then hand out and trade with friends and other artists. Collecting zines is a passion of mine and it’s such a cool and inexpensive way to make things for others. But at the end of the day, physical objects can never be replaced by pixels and LED diodes.

You work at many different scales and types of media – concert gig posters, animated GIFs, editorial illustration, creating patterns for apparel and other brands – do you have a favorite? How does working in such varied illustration and design medias help you expand your artistic skill set?

I believe that if I were to have a favorite that would in itself take away from the exploration of how the application and context effects the outcome. I love the ways in which working in so many design medias has effected the work that I make and I feel that it’s become an inextricable part in my process. Illustration is so often bound by a rectangle, and I’ve found that design is an ideal situation to push my work into new dimensions, whether physically or conceptually. I also just thrive on working on many different things during a day – to go from illustrating, to using type, animating and thinking in motion, to creating patterns, and then to writing and thinking of exhibition work – the diversity is what captivates me.

Tell us about Hella Nasty! Who are you guys? How did it start?

Hella Nasty is an arts and culture blog run by my designer/illustrator friend and longtime collaborator, Leanna Perry, and myself. We chose to start the blog during junior/senior year which was the peak of our educational endeavors. We spent upwards of 10-14 hours a day in the studio working on projects, and talking about work that we were making, ideas that we had, and artists whose work that we loved. It basically just made sense that we’d create a platform to share this content we’ve been collecting on the Internet for everyone that wanted to see, including: painting, illustration, design, sculpture, exhibitions, lectures essays and readings, as well as photos from road trips we’ve taken, cool music and dope abandoned buildings.

What’s been your favorite project that you have worked on recently?

I’m currently finishing a project for Adobe, creating an illustration to promote Creative Cloud. The creative director I’m working with gave me creative freedom to run wild with everything – which was a perfect opportunity to work on things I’ve been expanding on in my work already: illustrated type, crowd scenes, a further exploration of materials, and graphics integrated in contrast to more illustrative elements.

Where do you look for inspiration? What/where/who/why is currently inspiring you?

Inspiration comes in so many forms that It’s somewhat hard to pinpoint: weird signage, anything brightly colored or with graphic patterns, architecture and abandoned spaces, music, and emotional reactions to visuals and social situations. A lot of the actual ideas that I’ll execute generally come from past work (continual flow) or observed social situations (riding the bus/train). I just recently relocated to NYC so that’s most certainly been one of my major inspirations for work – I love busy things already so I feel that the work I make and the overall climate here go hand-in-hand: so much signage, so much neon, so many weird/janky/make-shift things. As far as artists I’m currently stoked on I’ll try to name a few: Michael Staniak, Stuart Davis, Brett Flanigan, Leanna Perry, Anny Wang, Matthew Palladino, Ben Barreto, Dan Bortz, Bill Rebholz, Mel Win, Jon Han, Thomas Colligan, Misaki Kawai, and so so many others. 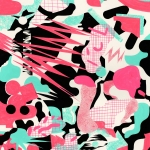 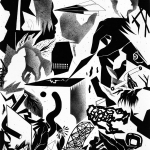 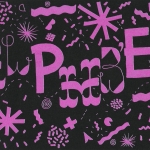 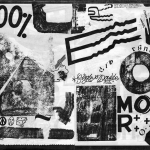 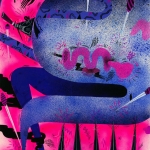 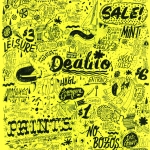 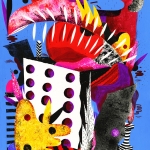 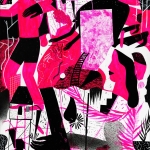 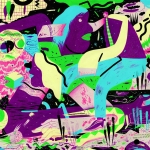 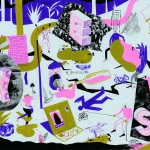