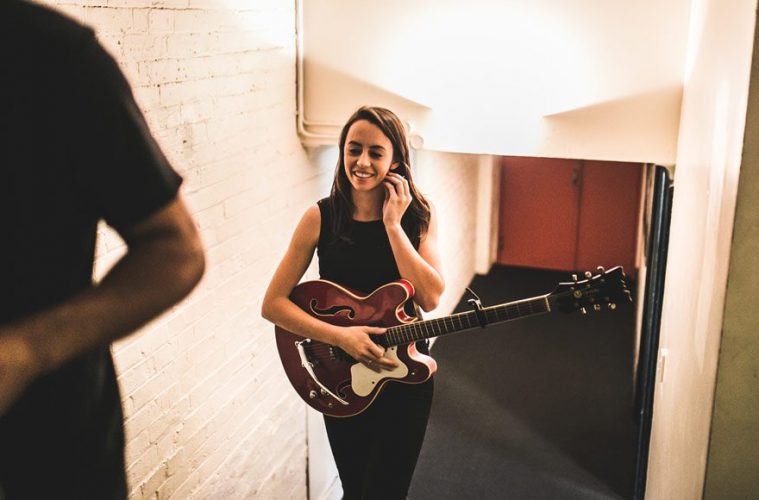 Sophie Payten, known musically as Gordi, welcomes you into her life and thought process in her upcoming debut album Reservoir. On the soft, atmospheric album Gordi grapples with loss — which comes to the forefront in tracks like “Heaven I Know”, a beautiful and breathy track in which she struggles with letting go. Reservoir — which is available on August 25th via Jagjaguwar — is the follow up to Gordi’s 2016 EP Clever Disguise. In that time she has stayed incredibly busy — in addition to making the album she finished a 6-year long medical degree and played with Bon Iver on The Tonight Show with Jimmy Fallon in promotion of his recent album 22, A Million. I sat down with Gordi to talk all things first albums, her songwriting process, and music as a form of catharsis.

Hey Gordi, I love the new album! The album, Reservoir, is your debut – how does the process of making an album differ from making singles?

Making an album gives you the luxury of exploring different corners of the genres and styles you work within, whereas with singles you sort of feel the pressure to represent yourself entirely in every song. The process of making Reservoir was a lengthy one. Throughout 2016 it came together in bits and pieces in different parts of the world, but it wasn’t until the start of 2017 that it all came together. I spent some time in Reykjavik, Wisconsin and LA pulling all the pieces together, so by the end of February, Reservoir was virtually complete.

First albums can really set the tone for an artist – who are some artists you think have great first albums that you looked to for inspiration?

Asgeir’s ‘In the Silence’, ‘The Positions’ by Gang of Youths, ‘Sprained Ankle’ by Julien Baker. The thing that they have in common is that every song on the record is a good song, and the production (however elaborate or minimal) really highlights that.

What do you think makes for a great debut album?

I think the song is always king – so a great debut album at its core should be a great bunch of songs. I like records that are diverse in exploring different styles, but have some strong common themes or textures running through them. A debut album should give you the story of the artist.

Many of the songs center around loss — was making Reservoir a cathartic process?

Songwriting is always cathartic for me. Making Reservoir was definitely like a therapy, both while I was in it and now retrospectively. It’s a lens through which I can now view the most formative years of my life, which is a pretty powerful thing.

I loved the music video for “Heaven I Know” — can you tell us about the concept of the video?

We wanted the video to be a really honest, heart wrenching portrayal of the song. The natural elements that I am battling against are a physical representation of the adversities that cause the breakdown of an long-held relationship.

You also wrote this while finishing a 6-year long medical degree — what made you decide to do music full time, and where did you get that interest in medicine?

My interest in music has been with me my whole life, medicine is another passion but the two don’t always work that well together. I decided to pursue music in about 2011-2012, I’d seen this amazing live show that had left me quite stunned and emotional. I left it thinking that’s what I had to do — play my songs to people who would listen.

Your songs are very beautifully layered and arranged — can you tell us a little about how your songs get made?

I usually break the process up into 2 parts – the songwriting first on one instrument, the guitar or the piano, and then I let the demo sit for a while. Then I start to gather reference tracks and think about where I want the song to get to. I’ll either muck around at home recording some basic parts, or wait until I get into the studio to track everything top to bottom while having that end point in my mind. I’m a lover of harmony and consonance and for me, the various textures of a multitude of different instruments combined highlight these two things beautifully. Sparseness and space ought to definitely be preserved, but I think you can still do that and have layered instrumentation.

Even though what I’m sharing is the most private thing in the world, it strangely doesn’t feel like it. Like I’m hiding in plain sight. Maybe because at the end of the day, only I really know what my songs are about. Other people can guess and interpret, but I’m able to keep the private origin just that – private.

You also got to perform with Bon Iver on The Tonight Show with Jimmy Fallon — how did that all come about, and how was that experience?

It was a pretty incredible experience. To meet all those guys, plus being on Fallon and just being part of something so musical and genuine was really special. Bon Iver and I had are both on Jagjaguwar, and we happened to cross paths on a few things, so they’d come across my music through those mutual connections. They were assembling a choir for this Fallon performance and sent me an email asking if I was keen. So I hopped on a flight to New York and in a quick 20+ hours I was there.

Who are some of the biggest inspirations to your songwriting?

I grew up listening to Carole King, Billy Joel and James Taylor. They taught me that a good song should tell a story.

Thanks so much for sitting down with us, and what’s next for Gordi?

Reservoir comes out August 25th so for the moment it’s about getting out into the world, touring and sharing this record with anyone who will stand patiently still while I play it to them.