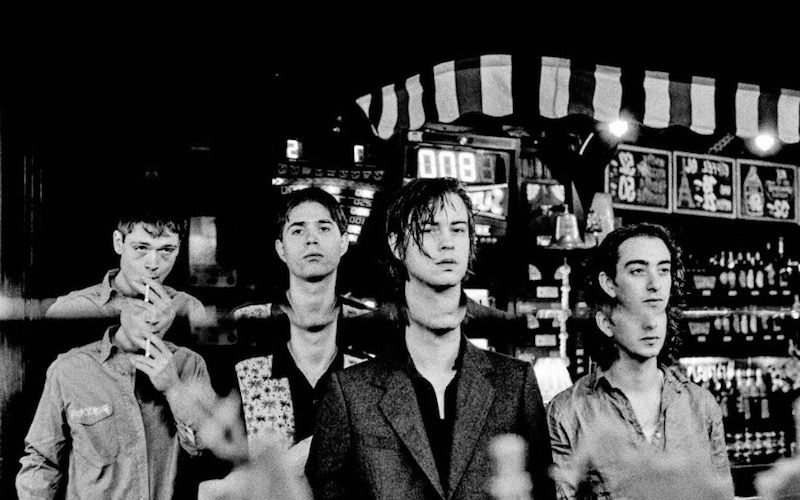 Iceage Offers an Aggressive, Beautiful Catharsis at the Regent

There’s a crawling feeling inside your gut, pressing up against the sides, tunneling towards the top. All day, through work and school and responsibility, you swallow it back down. As dusk slithers into sight, you find yourself free, and on the streets of downtown, still choking on that sensation. You walk through the doors of the theatre, through clouds of smoke and slinky flashes of black leather—you find your place in the crowd, and stand still, waiting. Even that demon in your belly has settled in for a moment of music. And then, as they take the stage, a young man draped in silk and beer begins to moan, and whine. Suddenly you are, too, and that nasty bit of angst is long gone.

This is the beautiful, manic, sophisticated catharsis that Iceage brought to Los Angeles last Wednesday night at the Regent Theatre. The Danish punk group is in the midst of touring their new album “Beyondless,” released early this May. Despite this being their fourth album and first release in four years, we are only seeing an upward climb towards perfection from the quartet. Formed in 2008 in Copenhagen, the band, made up of vocalist Elias Bender Rønnenfelt, guitarist Johan Surrballe Wieth, bassist Jakob Tvilling Pless, and drummer Dan Kjær Nielsen, truly brought their purest form of musically toned emotion the stage Wednesday night.

Iceage has created their own niche within the punk scene, as was evident at their show. Although they cling firmly to their darker, aggressive roots, their noise retains a clean and clear elegance rare to the genre. As an addition to the quartet, a lone violinist played off to the side of the stage, his simply being there a telling cornerstone to their style.

The album, though certainly in-your-face, has a particular muted tone to it. Voice melds into instrumentals to create one continuous stretch of hardcore rock harmony for a near-gentle experience of the chaos. Intermittent breaks for horns and other unusual-to-punk riffs give emotional moments to contemplate the mess. Complementary to the sound is the band’s impressively intelligent lyricism. Each as poetic as the next, their words alone could easily make stand-alone works. The album’s title is a reference itself, to Samuel Beckett’s Worstward Ho, a satire published 1983. The anarchist and satirical run a heavy influence throughout the band’s work, a symbol of their messages which ring closer to home.

For Iceage, just as important as the music is the air of lead vocalist, Elias. Every part of him lends itself to a powerful stage presence, practically bursting at the seams with angst, sex, and class. Constantly rolling up the sleeves of his blouse shaken loose, his flopping hair constantly fell perfectly over gazing dead eyes matching carelessly parted lips.  The other band members remained physically silent and relatively still, pouring their hearts into their respective instruments, lending the eyes to follow the rowdy Elias. As he raucously sprung around the stage while at the same time caressing the cord of his mic, he oozed with the passionately pained spirit of the music he makes.

Incredibly interactive with the crowd, songs such as “Catch it” and “Pain Killer” brought a sense of such strong relation that he would often lean over and scream into faces mere inches away from his own. Although we half expected Sky Ferreira to make an appearance, Elias did a fantastic job of bringing with their collaborative piece an intense sense of uncontrollable self-destruction and yearning. As he mentions “fondling the thighs of forfeit” in “The Day the Music Dies,” we truly see the theme of frustration with self-destructive tendencies and temptations shine through. “Beylondless,” it seems, signifies our inability to move beyond the barriers we have ourselves built, and frustration in never moving forward. Only in moshing to the expression of these can one fend them off.

If the opportunity presents itself, grab a ticket to see Iceage as soon as possible. Although their new album is in itself makes the heartache, the live experience runs into another sensation entirely, far beyond any had alone.