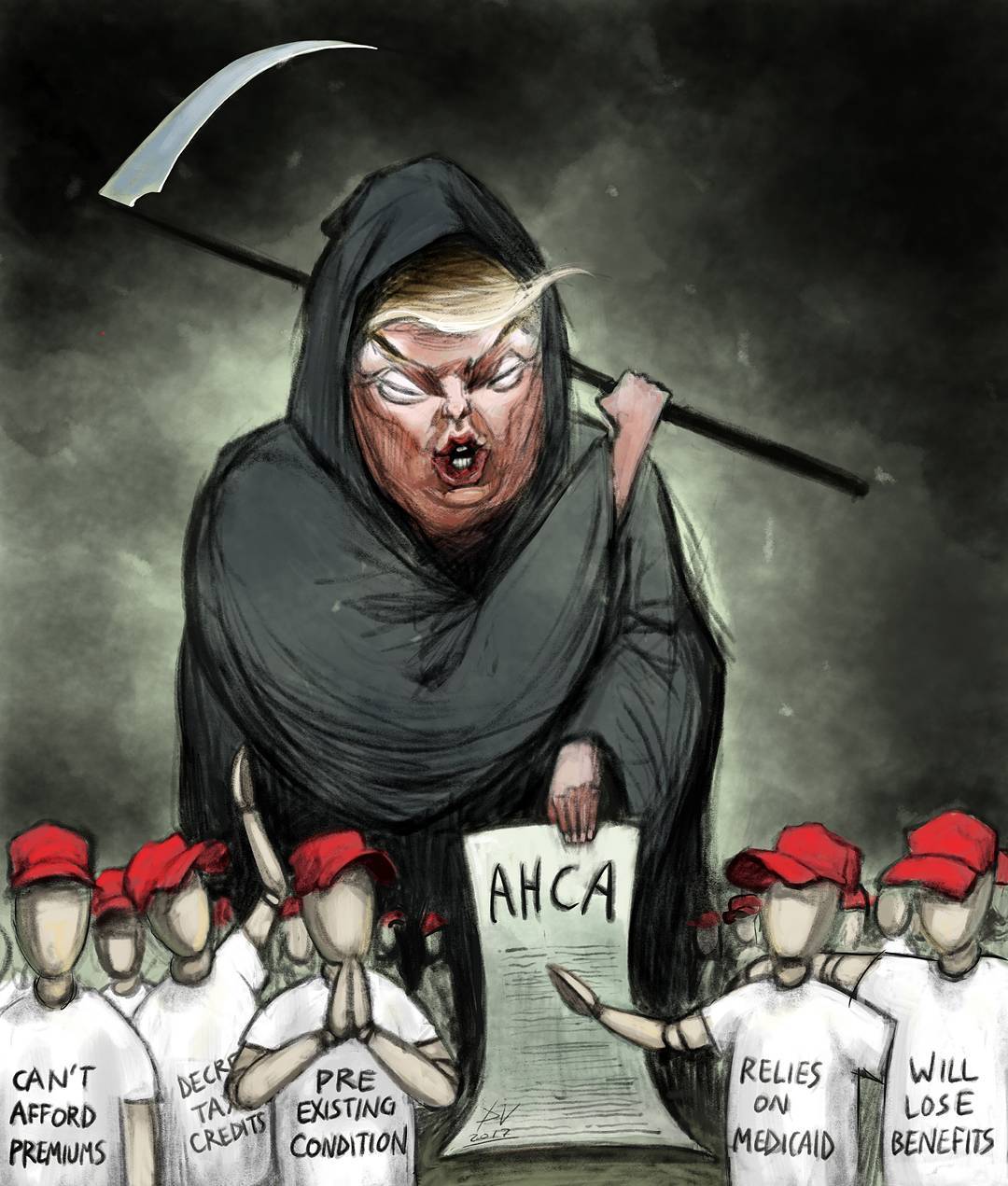 It’s Called Having A Country

“It’s called ‘having a country.’”  Such was the interjection of Michigan’s Democratic Senator Debbie Stabenow to Mick Mulvaney, as he ghoulishly defended Trump’s federal budget proposal before a hearing of the Senate Budget Committee on May 25th; a budget that drastically reduces or eliminates broad social investment for the sake of military spending and tax breaks for the wealthiest Americans.  This was Mulvaney’s second performance defending the absurdity that is Trump’s vision for America, having done so before the House of Representatives a day earlier. Mulvaney, currently the head of the Office of Management and Budget and previously a devout tea-partying Representative from South Carolina, is the lead salesman of the Trump administration’s snake-oil plans to restore America to its so-called previous greatness. Much can be gleaned about the Republicans’ overarching mission from Mulvaney’s performances, because it is rightly contended that budget proposals are indeed moral documents; they express priorities and values and create a blueprint for the social infrastructure of the today and the tomorrow.

Stabenow’s starkly succinct interjection came when she asked Mulvaney to defend an elimination of cleanup and restoration funds for the Great Lakes, the world’s largest source of fresh water, and  while Mulvaney was slinking through his newly fabricated turn of phrase on budget priorities: “How can I ask a single mother in Arkansas to pay for clean water initiatives in the Great Lakes Region?” It’s called having a country. You see, Mulvaney has made it his custom to pit average Americans against each other by citing incidental programs and incidental proxy Americans. His standard line goes “How can I ask a single mother in Detroit to pay for (eg.) the National Endowment for the Arts?” It’s his brazenly antagonistic approach to frame “compassion” in budget priorities to suggest that we need to have compassion for the payers of taxes, not the beneficiaries of federally funded programs.

“When all of the benefits accrue to the wealthiest of Americans, Republicans obscure the injustice by pitting average Americans against each other via invention and outright lies.”

Of course, when faced with the Senator from Michigan, Mulvaney un-artfully transposed his Single Mother to one of Arkansas, not Detroit. Because Mick Mulvaney has never met a Single Mother from Detroit, and he knows that Debbie Stabenow has, and he knows how precisely she could define her plight to a level of detail he could scarcely understand. And how perfectly does that represent another notch in the Republican belt of social mythology? In the Reagan 80’s we had the so-called Welfare Queen that never really existed, and now we have the Single Mother in Detroit who does absolutely exist, but not as one who jealously assails social programs that benefit other Americans like her, but rather one who only suffers from the Republican agenda.

When all of the benefits accrue to the wealthiest of Americans, Republicans obscure the injustice by pitting average Americans against each other via invention and outright lies. Such socio-economic segmentation reduces all of society to a “me first” mentality that maximizes the leverage the wealthy Americans have over all other segments. There are a myriad of programs that are supported by the federal government in all corners of the country that do not at once directly and obviously benefit all Americans equally. Rather, these programs collectively secure and rejuvenate society in a comprehensive and holistic way. The Single Mother in Arkansas and the Single Mother in Detroit are not opponents vying for scraps, where when one benefits and the other loses.  Just as a healthy Massachusetts is good for a healthy California, and a senior citizen obtaining Meals on Wheels is as important as a child attending HeadStart. It’s called having a country.

Despite a history of social and economic exploitation and injustice that has created a straight-line from slavery and post-slavery systemic racism that exploits all non-white Americans, to the emergence of a new permanent underclass that has grown more and more diverse as even the protections of labor unions and manufacturing sector employment that once benefitted the low-skilled white worker, the ills purposefully imposed upon the poor are instead claimed to be the fault and the burden of the poor. Let’s have the Single Mother in Arkansas duke it out with the Single Mother in Detroit while the wealthy walk away laughing.

And how can we be so sure that the Republicans are so ruefully dismissive of broader society for the sake of the wealthy? How can we impose such harsh accusation? How do we know that the sacrifices imposed upon the poor are not just an aspect of a sacrifice shared by all? They don’t even really try to hide it. The Trump budget’s lone mention of taxes is to eliminate the Inheritance Tax, what you’ve heard the Republicans cunningly refer to as “the death tax.”  Currently, all family inheritances of $5 million or less are tax free. So, if a child is left $5 million from their parents, they get all $5 million, just for the accomplishment of being born rich. If a child inherits $7 million, they would have to pay taxes on anything over $5 million. So, the first $5 million is tax free, and the next $2 million would be taxed. Not a bad haul considering your average American is paying taxes on the income they make from actually doing work. This, to Republicans, is an injustice to those that are born into great wealth. Unsurprisingly, Trump and his Cabinet would stand to reap hundreds of millions of dollars in personal benefit from its repeal. Likewise with the Republicans first attempt at repealing and replacing Obamacare, it attacks the poor with a reduction in Medicaid that would impact some 23 million low-income Americans while providing a $600 billion tax break that primarily benefits the wealthy. With these known proposals on the table, what should we assume the final Republican “Tax Reform” package will look like?  Pretty good for the wealthy is a fairly safe bet.

You’ll hear Republicans refer to the wealthy as the “job creators,” despite their coinciding efforts to block increases in the minimum wage and to reduce protections to employees at the hands of negligent and abusive employers. You’ll hear them speak of the crucial need for economic growth despite decades of data that show that top-down “trickle down economics” only serves to widen an already egregious wealth gap. You’ll hear white men born into wealthy families extol upon the virtues of hard work and personal industry. Modern free-market Homers travelling the countryside in the new bardic tradition of supplanting the hard realities of history with the creationary myths of the all-healing capitalism.

And you’ll notice that there just happens to be enough money for not only their tax breaks, but also for more police and a stronger military. The gated communities that are housing our wealthiest citizens are precise metaphors for the vision Republicans have for our future. The poor suffer all maladies in greater proportion, from crime to clean water scarcity to climate change. This budget further extricates the wealthy from the burdens of a wholly healthy and vibrant society. The proposed healthcare bill extricates the wealthy from contributing to the healthcare of the much more numerous poor. The departure from the Paris Climate Accord incentivizes the exploitation of a climate that will impact the poor and fragile.  To date, the net effect of every proposal by the Trump administration is in the service of the wealthy at the expense of the poor. But let’s not give Trump all the the credit, this has been the Republican plan for decades.

We remain a most wealthy nation, with great capacity and great potential beyond. But we cannot let ourselves be segmented by the specter of false crisis. The Single Mother in Detroit and the Single Mother in Arkansas are not at odds, and the wealthy family behind the walls of the gated community should see themselves as no more valuable than the family who finds themselves living in a car — as the resources for temporary housing assistance has simply run-out in their city — because they are no more valuable.  We cannot cast off the impoverished and proclaim that mere sustenance for so many is the price to be paid for the largesse of the very few. We invest in schools and healthcare because human capital is our greatest resource, we invest in the protection of our environment and the rehabilitation of our cities because a healthy society requires a healthy environment, we invest in the arts because, as John F. Kennedy once said, America is truly great when it “…commands respect throughout the world not only for its strength, but for its civilization as well.”  It’s called having a country, and ultimately we will have the country we pay for.