If Alexis Sablone isn’t in the midst of creating something, there’s probably something wrong. Sablone, who has not only received a Masters Degree from MIT in Architecture, but who was also recently turned pro for WKND Skateboards, is a perpetual creator, routinely obsessing over one project or another. She has barreled through her life thus far as an artist, skateboarder, and accomplished student, gleaming as a pretty spot on example of someone who personifies the spirit of independence.

Whether it’s making short animations for WKND, illustrating her massive graphic novel, fixating over small details of a new architecture project, or skating in the female pro contest circuit, the Connecticut native’s work ethic reminds us of the importance of sticking your neck out, making every choice count, and being the master of your own creations. Skateboarding is not a ‘team sport’ in that everything you do on a skateboard is between your body, your mind, and the trick you are trying. The people who find skateboarding are people seeking an individual pursuit, and that is what Sablone has accomplished over the years in most aspects of her life. While a lot of people get crippled by fear, the fear of taking that first step to independence—whether it be mental or monetary—Sablone has and continues to unabashedly carve out her own creative path.

We had a chance to talk with Sablone in the days leading up to her solo show at Extension Gallery in Boston, where she’s showing a range of animations, illustrations, and her new board designs for WKND.

Tell me about the upcoming show. How did it come together and what will you be showing?

I’ve been an Orchard team member and friends with everyone for years. I’ve always wanted to do a solo show there, but it was never the right time. With the release of my board they thought it would perfect to have a show that coincided with that.

I’ll be showing a combination of past, present and future WKND graphics and animations – plus some of my own stuff that’s mostly about incredibly long or extremely short periods of time.

Has art always been a constant in your life? Tell me about some of the different artistic/creative phases you’ve gone through?

Well I’ve been a drawer longer than a skateboarder. I think I’m always in some kind of creative phase – obsessing over one project or the other, if I’m not it probably means somethings wrong.

How did you start creating graphics/animations for WKND?

I started skating for WKND about a year before they announced me. Basically, when the ‘Who’s To Say’ video came out, Grant already had his hands full with editing so I told him I could do the animations – eventually I just took over, first in an unofficial capacity and now officially.

Congrats on officially becoming part of the WKND team earlier this month! Tell us about how it all went down?

I’ve been skating a long time and I didn’t really know if I would ever actually have a board with my name on it, so I stopped worrying about whether that would happen for me a years ago. But one of the first things Grant talked to me about when I first joined WKND was about getting a board; I obviously didn’t object.

What primarily fuels your creativity on a daily basis?

It’s hard to pinpoint where exactly it comes from, but I kind of picture my brain as a tight loop that’s just constantly coming up with the next part of a project I’ve been working on, or a variation of a thing I’ve already done or drawn, or an entirely new way of doing a project that I’ve been doing – or all the above.

How did your youth shape the way you do things now?

Well even then I had projects. I’ve had projects as far back as I can remember, mostly absurd unbuildable inventions, especially for a 6-year-old. I think the fact that my mom allowed it to go on and even supported it probably had a lot to do with who I am.

Like this one time I gathered all the bugs around the house to harvest their organs so I could build a person – a small person who was going to be my future friend, that was my project.

People can criticize DIY as a slacker thing, but people who create things off their own back have a lot of motivation and creativity – they really believe in what they do. Artists and skaters are not slackers. Why do you think these worlds are so productive?

I think when people have that opportunity to follow what they’re passionate about or obsessed with, it’s almost like there’s no alternative – so they’re bound to achieve a lot. It’s really sad that not everyone gets to do what they love.

One can’t help but be impressed by what you’ve achieved both academically and in the skateboarding world. How do those two worlds co-exist for you?

To me it doesn’t really feel like they’re coexisting. I’m always pursuing or obsessed with doing something.

What personal creative projects are you working on right now?

I go back and forth between a very long graphic novel and a short animation. Both stories take place over millions of years. 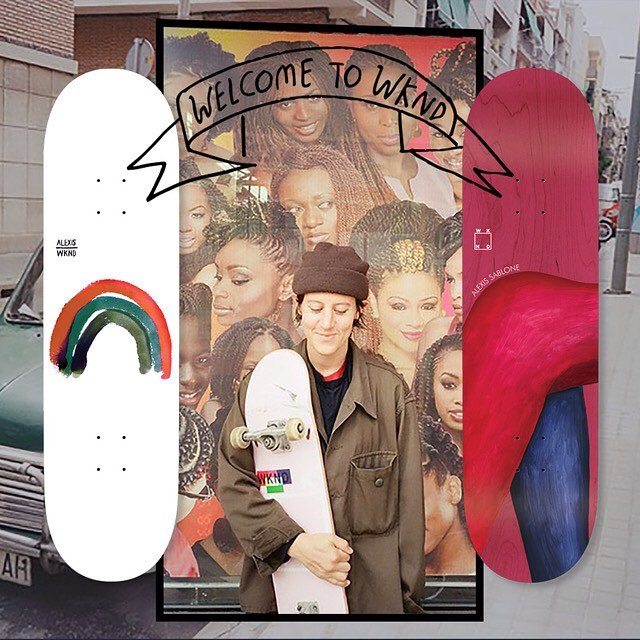