This feature on Ari Bird was originally published in issue 18. You can order the issue here.

Ari Bird has a deep connection to a lot of objects.

She collects artwork by her young students—thoughtful portraits of her (the creepy ones are her favorite) and cardboard-crafted replicas of their favorite electronics—and page-worn notebooks bearing old thoughts and sketches, intricately folded Chinese Joss paper meant to be burned in offering to late loved ones and, most recently, Polly Pockets, a collection she had to restart from scratch. Some are reminders of greater things while others are caprice tendencies, but what they share is the connective draw of an inciting experience and a continued ritual, and it’s that awareness through familiarity that Bird thoughtfully examines.

Her artwork—oil and acrylic paintings, large-scale objects and, as of late, some multi-scaled interactive prop work—entreats viewers to consider perspective through environment and intention, and the idea that, perhaps, artwork is both objective and subjective, respectively. Through scale and interactivity, exaggeration and cooperation, Bird’s work engages themes of communication, ritual and identity, and beautifully so in airy, dream-like hues. As an educator and an intuitive, rad chick, she appreciates the human instinct to socialize with our surroundings, and if that’s art, then hell yeah. 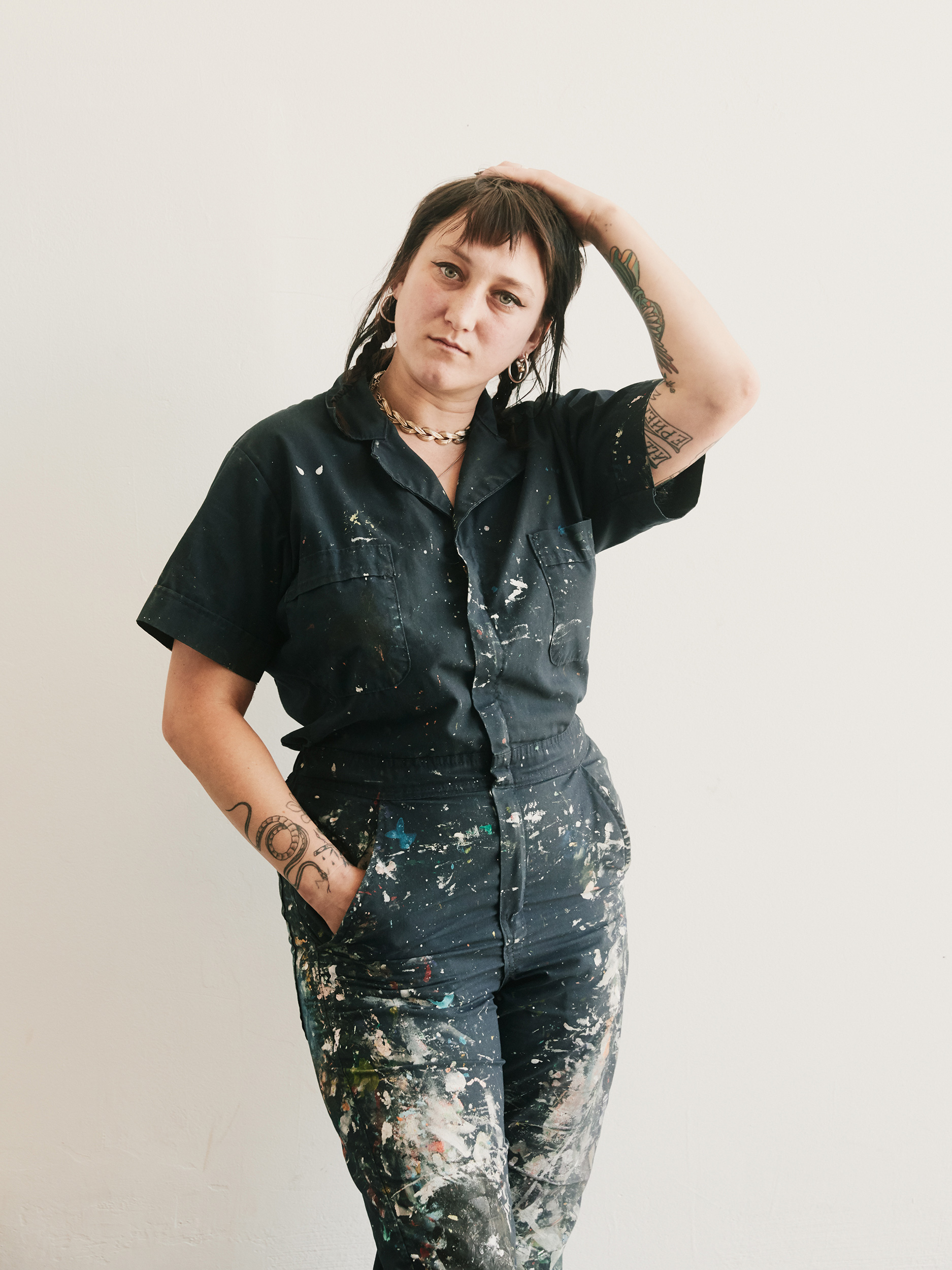 So, who is Ari Bird?

I am a visual artist based in Oakland, CA. I like to balance objects and shapes and distill them down to minimal imagery. By visually cutting out or collaging symbols around me, a new narrative is created. A friend said my painting style is controlled and precise yet crude, which seems accurate. I like attempting to balance delicacy with clunkiness. Much of my practice is based on rituals. I grew up in a fringe religion (My single mom converted [to Mormonism] I was around 5) that I’m not a part of anymore, but I think I really grew to enjoy all the rituals. That was something that was appealing to me, and when I stepped away from that religion when I was pretty young, I was always seeking other things that would fulfill that ritual and transcendent action. I did things like go to punk shows, and I was part of alternative communities growing up, and I surfed, and now, I’m an artist, I’m a painter, and it totally makes sense because it fills that ritualistic void. 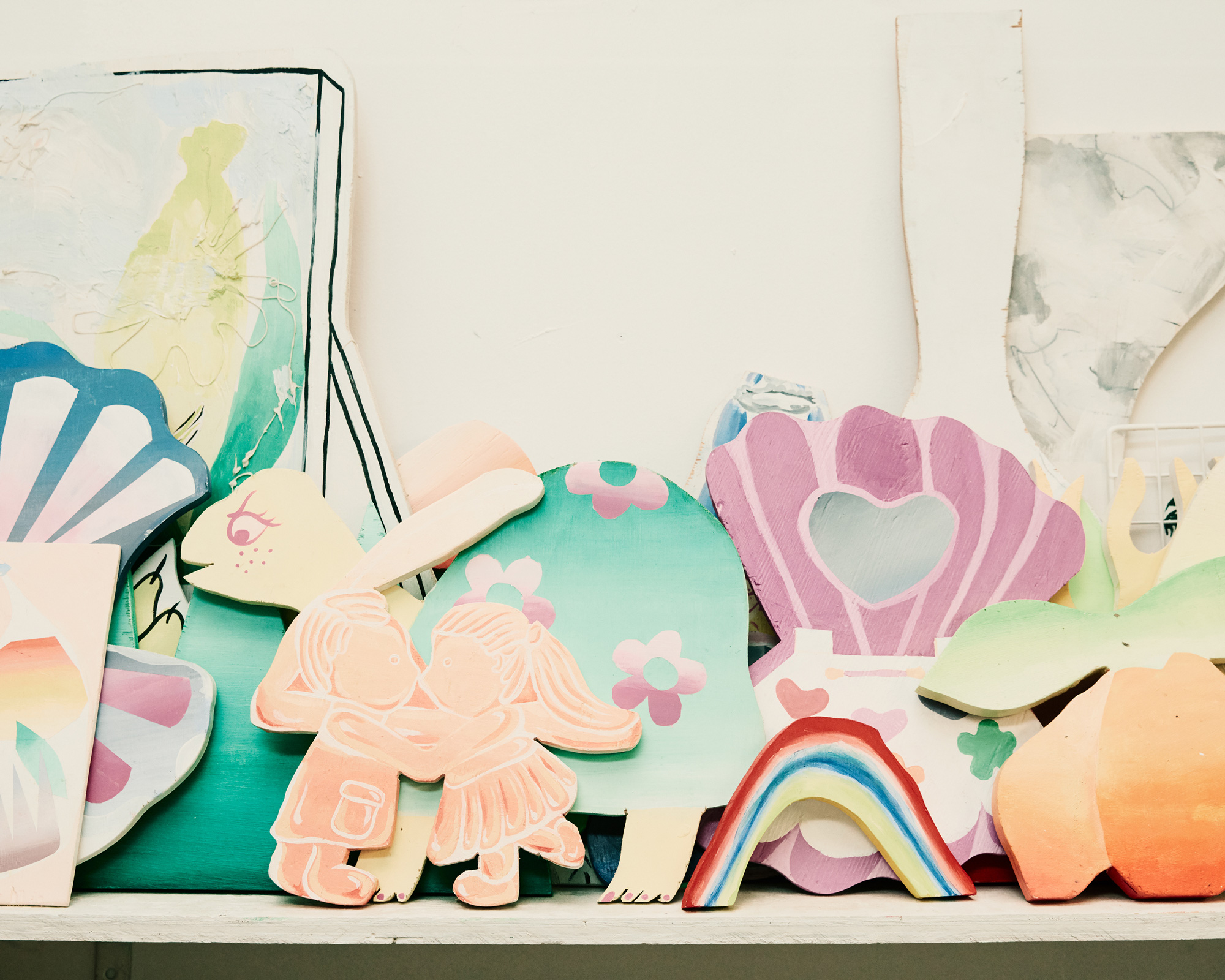 Tell me about some recent projects—I know you’ve been busy.

[I was part of a recent] show at Classic Cars West in Oakland, which is a large DIY space with many different functions, and that show explored ASMR, things that are oddly satisfying and the psychological effects we’re getting out of these. A lot of times I’ll be drawn to objects or sensations and I don’t really know why. It’ll be something kitschy, like a Dollar Store toy or a graphic from a fruit packing box, and I don’t know why, but I need to consume it or use it. And I started thinking about that in terms of ASMR and how sometimes there are these visuals that are distinctly tactile or soothing or satisfying, and I don’t know why. So I wanted to explore those things in that show. It included an interactive ASMR workshop. Because ASMR is this isolating thing—something that you watch on the Internet by yourself because it’s soothing— I wanted to see what it would be like as an IRL community-based experience.

Right now I have a show at Gallery 16 in San Francisco. They show emerging artists in their outside window, and I did a two-person installation with my friend Ian Parlett-Schaefer, and that was a really rad experience. The title of the show is “Sand Garden,” and it was a reference to the very first form of playgrounds in the US, and how they were first created for children to have a free space to play. It was an idea that started in Germany, but in the US it didn’t exist until the 1880s. Both of us are educators of children, so the curator put us together because making art specifically with kids really influences both of our work, like the tactile aspect, the playfulness and the sense of community created when you work on creative projects together.

Besides doing large-scale paintings, I also do a lot of large-scale, blown-up objects—I call them props. I’ve made a giant pack of cigarettes and a giant tissue box, but I’m also really attracted to miniatures. With these pieces, durability and boundaries around how to interact with art come up, since they are so seemingly tactile. 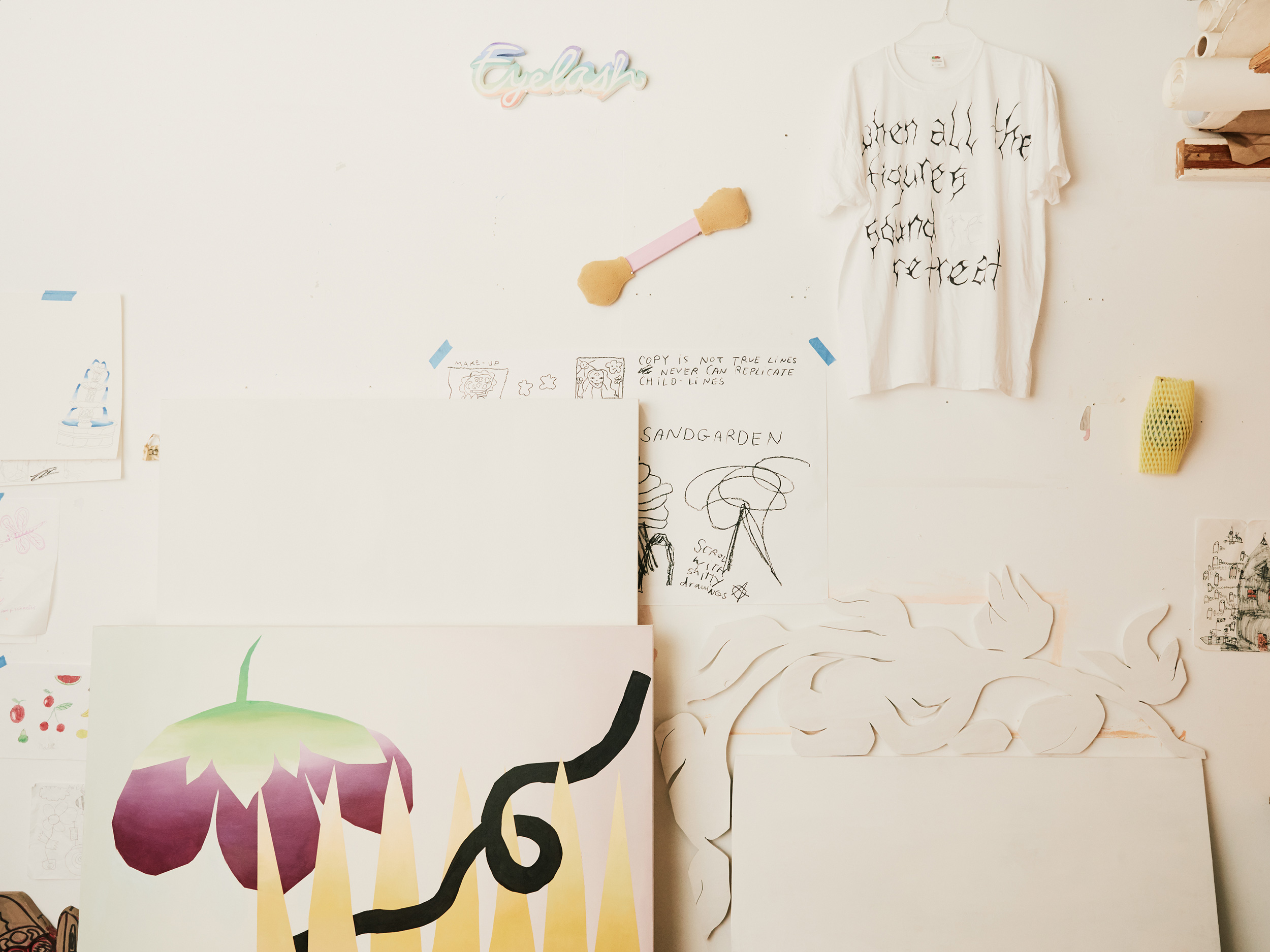 And what are you doing when you’re not creating these large-scale pieces?

I also work in Children’s Fairyland in the art department, restoring sculptures, rides and the hand-painted signs. It’s this quirky little amusement park on Lake Merritt with all of these old, rather decrepit sorta creepy sculptures and rides, but it’s basically my art style—these oversized, gradient mushroom sculptures everywhere and it’s kind of trippy and surreal. Walt Disney was actually influenced by Fairyland when he made Disneyland in the 50s, and also Frank Oz (the puppeteer of Miss Piggy, Animal, Yoda!!) got his puppeteering start at Fairyland, too! I love walking around when the park is closed.

I enjoy making art with kids because they’re just these little humans that are so funny and naturally curious about everything. The way that they draw is so intuitive, and it’s just such a natural way for kids to express themselves, to use their hands and to make things, and that’s really gratifying to me. I try really hard to incorporate that into my own work, but also to help to bring that out in them. Even if every kid doesn’t grow up to be an artist, learning how to use your hands in a creative manner to express your ideas and your emotions and whatever confusing things are going on in your body with something tactical is extremely soothing and therapeutic on one end, but it’s also a way of literally processing and thinking and growing. 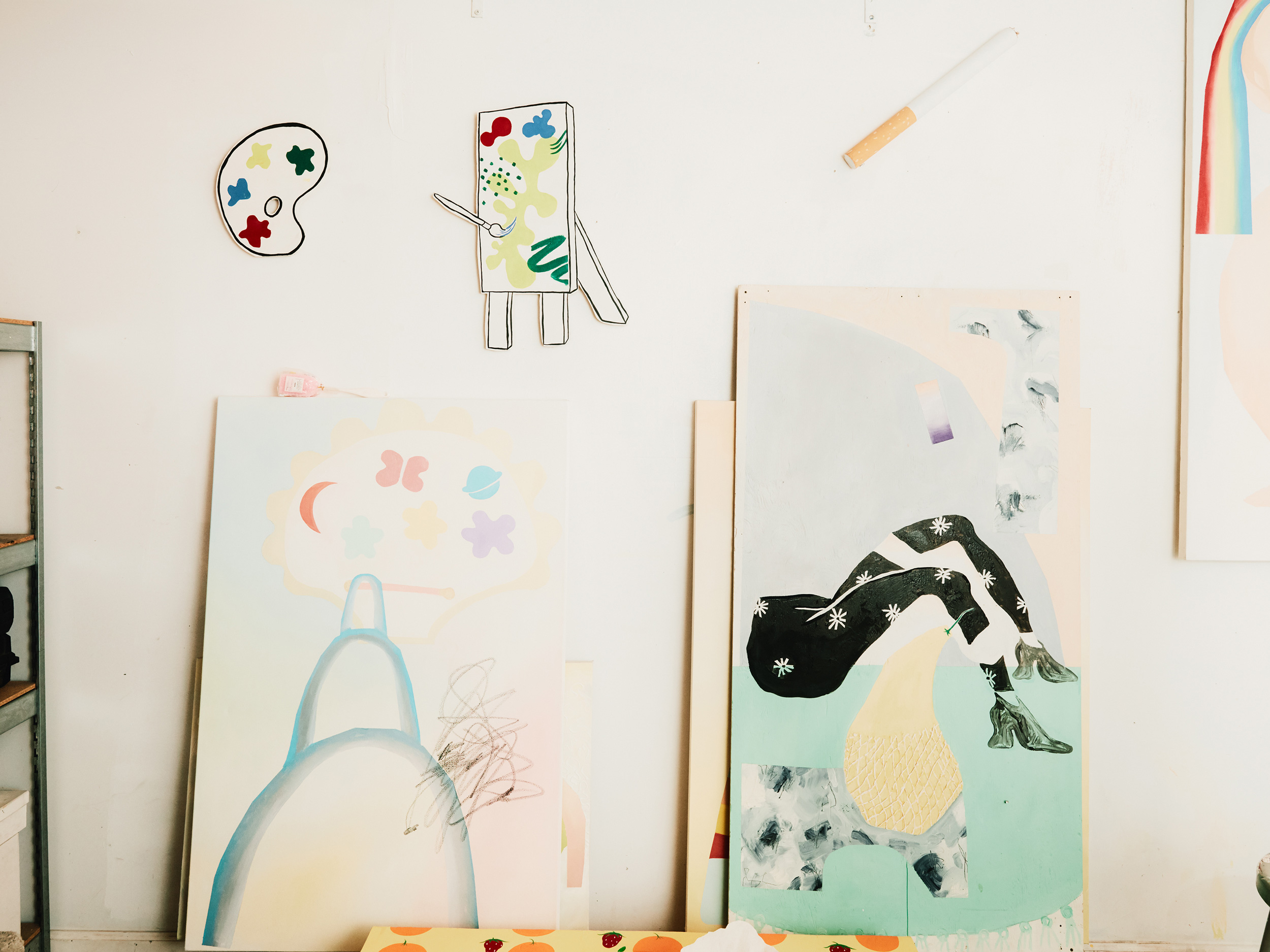 What’s your artistic process like? Is it ritualistic or sporadic?

I make it a practice to be in my studio daily. Even if I don’t have a direct deadline, I think it’s very important to make it part of your daily routine to give yourself and your work that level of value and respect for the process. Even if you’re having a day when you’re not feeling particularly motivated to make, just the act of being in that space and activating it is super healthy.

I’ll go through these cycles of production mode. First, it’ll be the frustrating side, when I’m bumbling through and experimenting, not too sure of what the final product is going to be, maybe not too satisfied with what the final results, but that’s just part of the process and, for me, that’s just the uncomfortable part. But then there will come this point when I’ll get this momentum going from all of this struggle that already happened, and I’ll be able to produce things that I know are at a level that I’m satisfied with. I’ll do a lot of loose sketches and usually, the only way that I’ll get to my finished product is through these loose gestures and drawing

For my large-scale 3D objects, one of the really satisfying things for me is that if I’m making a giant box of cigarettes I get to go through the hardware and art and Dollar stores and look for materials that can be manipulated to be most like that object. Finding these materials is a huge part of that process. 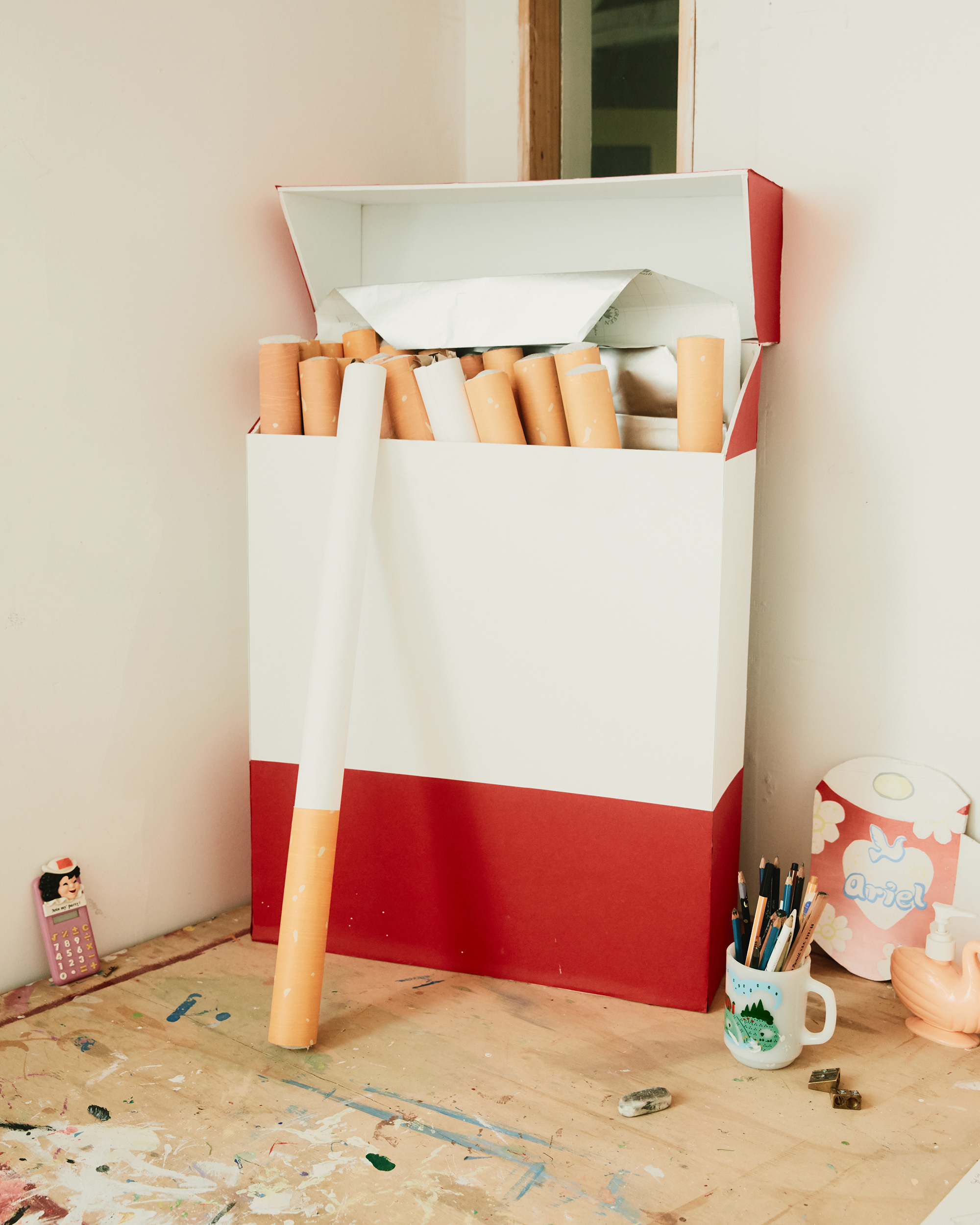 Your art is very tangible, and purposely so. What are your thoughts on social media and its influence on the art scene?

The reason I was initially drawn to making objects—as a kid and all the way up until now—is because of the contentedness that I feel by engaging in this self-creating world. It’s very real and it’s very tangible. And I see kids today watching videos—they’re getting these sensations, but they’re not actually doing anything. And that’s ok because that’s one way to learn, but what are we losing by consuming these passive ways?

I think it’s important to remember that social media is just a trend. And it is a way for people to express themselves, but in the long run, it doesn’t really matter. Technology in the arts and the ways that art and technology interplay, those things are going to change, and it’s always on the spectrum of going back and forth between relevancy and not. So I don’t know that you can really focus on those things.

On the other hand, though, I do really enjoy creating an aesthetic on my Instagram. I see social media as another landscape or area that you’re entering, so if you’re going to engage with it, you might as well make it aesthetically pleasing and meaningful.