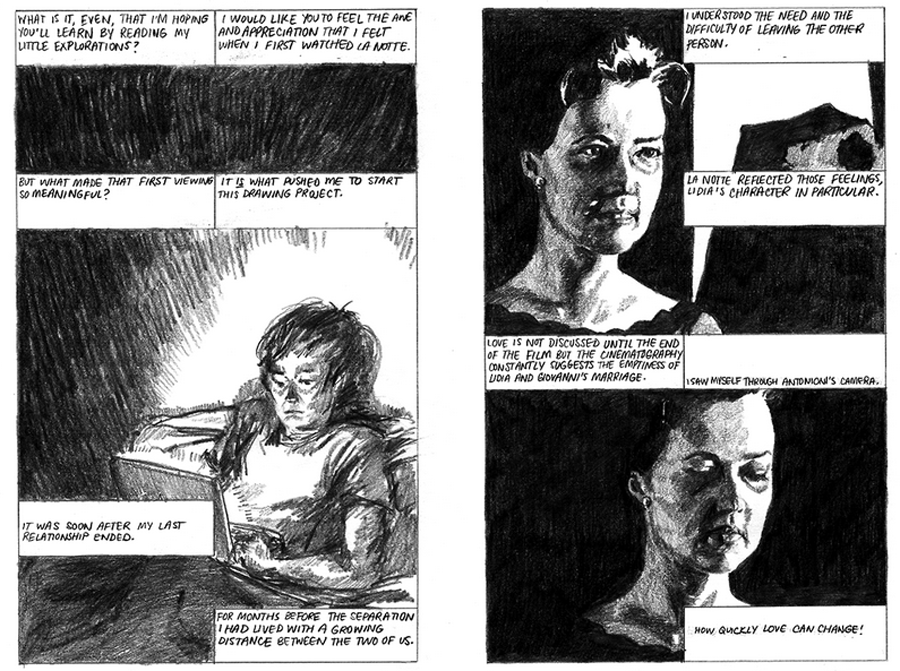 When we met Laila Milevski a few weeks back at The Boston Hassle’s first New England Zine Fest, we were amazed by her raw abilities, perfectly bound into pocket-friendly comic books. Working with brushes, pens and printers, Milevski has built an impressive interdisciplinary portfolio on top of a spectacular position as a graphic novel designer for an esteemed local press. The backlash? An inevitable artistic rut. Not that that’s slowing her down—Milevski will debut her latest comic book at the Massachusetts Independent Comics Expo next week in Cambridge.

Milevski grew into her talents with the help of some impressive impressions—the maternal  influences of Pagan Latvian mythology and a paternal fascination in rare books, and their accomplice, the letterpress. A hint of that indirect guidance must have stuck as we now see Milevski producing comic books and zines full of deeper-than meanings through a synergy of discussion and imagery, creating artistic-dependent publications in place of the genre-dependent norm.

I draw comics and I draw in my sketchbook. Occasionally I make other kinds of art and though my main ambitions are in the comics world right now I always try to keep something going that is more of a singular piece. I make art because it’s how I think of myself and my life and I always need to be making something—even when I don’t get to my art I am thinking about it.

“Drawings, comics, etc. by night, Art Department Assistant & assistant graphic novel designer at Candlewick Press by day.” Tell us a little bit about the work work versus the personal work.

My day job is at a children’s book publisher, taking care of the art department’s administrative needs and assisting the designers. I handle the original illustrations that our artists send in for picture books and illustrated chapter books; it’s wonderful exposure to a variety of styles and media. I’m also designing a graphic novel that we’ll be publishing in Fall 2015, which has been a great learning experience for me since I didn’t study design. It’s been very cool to contribute to the publishing side of something that I pursue in my own art.

Your sketches are fabulous. What attracts your attention most when your doodling? People? Emotions?

Thanks! The human figure is something that always returns or acts as a starting point. I wish I could inject my doodles with more variety but most often they start there. That being said, I cycle between periods of drawing from observation and from my imagination. The latter are more likely to originate in my emotional state, personal life, or current interests or obsessions. I find language, e.g. song lyrics or lines of poetry, to be inspiring as well.

Who are the people in your sketches, comics and paintings? Strangers? Close friends? Yourself?

All of those; plus imagined characters. Many are just extensions of myself, however.

A lot of animal/nature themes in your prints and paintings. Tell us a little about that inspiration.

I think I owe a lot of that to my mother’s influence. She is Latvian and I grew up observing and taking part in traditional Latvian rituals and activities whose meaning is based in religious beliefs. Pagan Latvian mythology deifies natural elements and celebrates the passing of the seasons; the Latvian children’s stories I grew up with featured wildlife characters, miraculous nature (e.g. flying lakes), etc. I’ve always been interested in cultures whose daily lives are closer to the earth and the idea of the shaman as being an intermediary with some magical significance. When I was growing up my mom instilled me with a respect for and veneration of nature and animals, but lately I’ve been attracted a bit more to their darker sides, how fear of nature’s power has led man to fear the world he lives in. I think I focus on the negative face of it because it allows me to explore the idea of the other, someone liminal to the rest of society.

What’s the transition—both mentally and mechanically—from comics to printing to sketching to painting? Do you find that they ever inspire one another?

Sketching, printing, and comics are highly tied to one another since they all come together in the process of making a book or zine. Painting unfortunately has grown very separate from the others but I have definitely thought about how I could bring comics into a painted context. I haven’t yet achieved that, though. Drawing has always been my mainstay and since I find it easier to communicate my ideas through narratives the idea of making comics was not much of a stretch, though I only decided to consciously pursue it in the past three or four years. For me that decision took a long time because I had to move past the ingrained sense that painting was a higher form of artistic pursuit. I’m very glad I got over that idea because I’ve realized that I connect much more with the comics community and I prefer its supportive, DIY approach to making, sharing, and distributing work. Sometimes I wonder if I am missing something by not trying to pursue the gallery world of art making but I don’t think I would do well in that kind of life anyway.

Printing is the means to make reproducible images–I used to focus on individual prints as artworks but now since I don’t have access to a studio I use it mainly to make fancy covers for my mini-comics and zines. It’s harder to be a printmaker without access to a studio, though there are some things I’ve been able to do on my own at home. I just paid a fellow artist to print one of my mini-comics on a Risograph machine and I’m very excited to be debuting it soon. The process of preparing files for print can be extremely frustrating and tedious but the pay off, at least in artistic gratification, is high.

You’re like a zine machine with all these printed works! What is it that you like about zines? Is it the process or the tangible piece?

For me it’s definitely both. Zines are easy to make and achieving the finished product is very satisfying since you can make it entirely yourself. But I also enjoy and appreciate the book as an object; zines are a DIY iteration of my broader interest in the book arts. My father’s passion is rare books and he worked as a preservation librarian and in a letterpress shop at the university; those were always a part of my childhood in small ways and I definitely think that influenced me over time. At art book events you’ll find me examining the books with unique forms and ways of printing, examining the mechanics of how it was put together. The ultimate satisfaction is when the book’s form and its message are directly correlated and supporting one another. I like my little experiments with zines since it’s a low-risk form of trying new things.

Who or what is currently inspiring you?

Antonioni’s films La notte and L’avventura; I’ve been making a comic about those movies. Aidan Koch’s comics, drawings, and paintings are always a beacon for me as well; and Ed Ruscha’s artist books have always been an undercurrent even though my subject matter is very different from his. Other than that I’ve been in a rut, just working on the same things for the past four months. I need to change things up.

Where can we expect to see Laila Milevski next?

Tabling at the Massachusetts Independent Comics Expo, October 4th & 5th, in Cambridge, MA. Drop by if you’re in the area and check out my stuff! 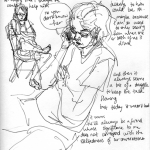 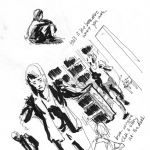 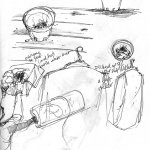 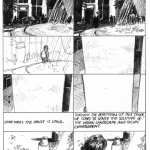 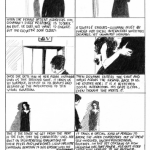 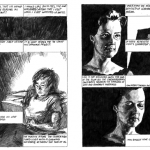