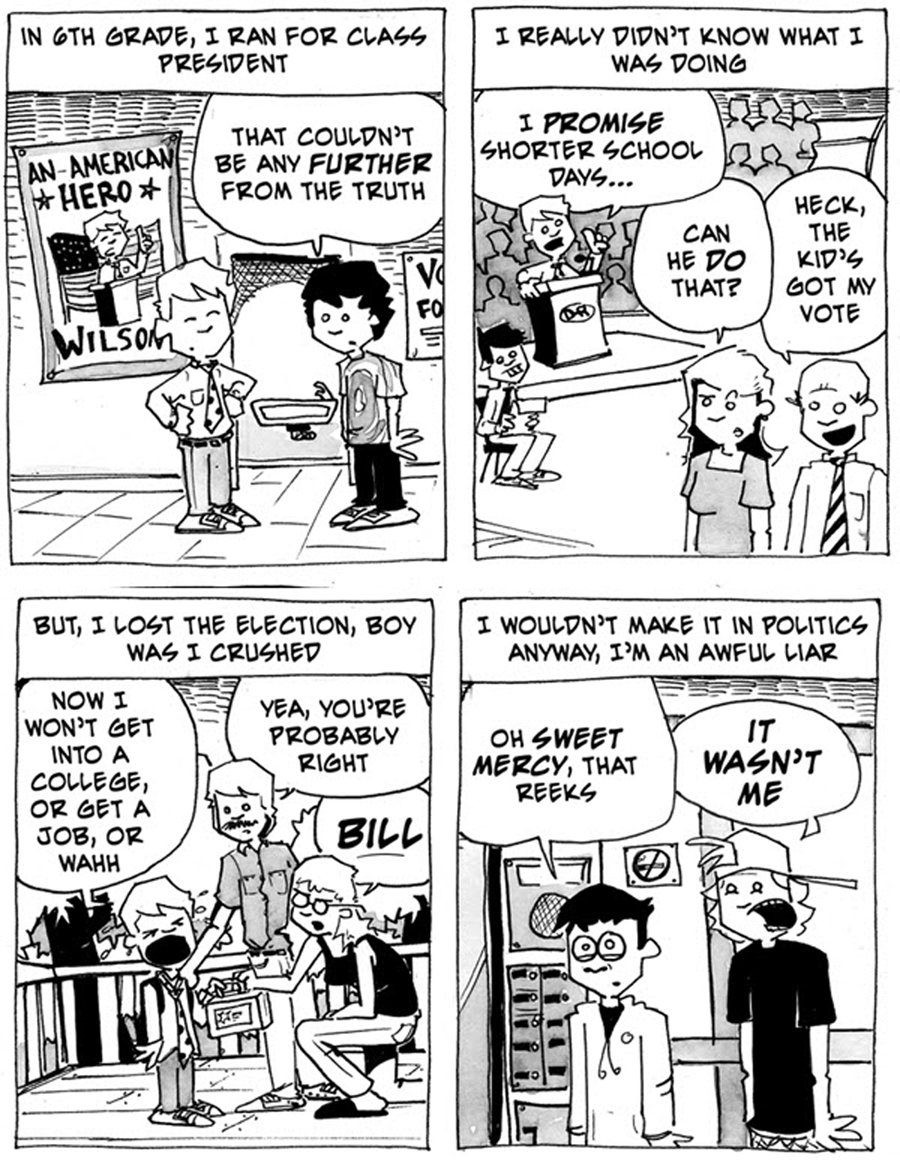 Caricatures depict our exaggerated realities. They offer a lighter take on life and its nonsensical situations with inflated expressions, colors and stories; dreamscapes of real life, if you will. But what happens when the man behind the amplified doodle is the man within the amplified doodle? That’s the dual “reality” for Rhode Island illustrator Will Wilson, creator and muse of his comic strip, Ordinary Bill.

Wilson takes good, imaginative care of his characters, Bill and Isis, with two published stockpiles of their four-walled existence—“Greetings from the Ocean State: an Ordinary Bill Collection”and “Ordinary Bill Book: Pretending to be adults”—complete with charming nautical backdrops, real-life frustrations and bubbly optimism. In the end, it’s all about illustrating his experiences with an embellished eye, all for the sake of his counterpart, Ordinary Bill.

So, Bill and Will: Best bros? Brothers? Identical personas? Where does the tie between you and your character come into play?

I get asked often how close the character is to myself and, honestly, the character is pretty close to my own personality. Overall he is an exaggerated version of myself: clumsy, unfocused, naive and optimistic. A caricature of myself, I guess. Although early strip of Ordinary Bill, (back in college) we’re very much autobiographical and as close to who I believe I am. Now it’s a bit more stylized, and more of how I would react to certain situations, from the mundane to the bizarre.

What’s your thought process like when starting a strip? Do you have to weed through several personal situations until you arrive on the right one to illustrate, or is it simpler than that?

The thought process is a tricky one. I do admire comics that can create interesting story lines and jokes with common or everyday situations… but I’ve always felt that one of the stronger aspects of the craft is that you can create anything you want…ANYTHING… so I try to make it a bit more fantastic. But most of it is observation and many times I’ll have an interaction with someone and or experience and try to apply it to something that wouldn’t have a personality. For example I had a bad experience with a real jerk at the bank… so I went home and drew a comic about a jerk toaster that purposely burnt my toast every morning, out of spite. Sometimes I’ll just stare out the window and wonder what the squirrels and flowers are thinking.

You must be an amazing doodler. Do you have a thought pad where random ideas get jotted down? If so, what’s that like?

I do have a “thought pad”. It’s a bunch of fun, to just jot down crazy ideas or thoughts… with many many doodles. The thing is, sometimes drawing the same stuff over and over again makes you burnt out. It’s nice to escape to a blank piece of paper where you can visit any idea you’d like… although the sketches and writings in the my sketch book get very personal.

What is the drafting process like? How many drafts? How many great cartoons come out of those drafts?

I keep a bank of cartoon ideas, and I usually, loose sketch it in my sketch pad and then re-write it a couple times and then hit the actual bristol board and I draw the final copy.

It seems like Rhode Island is the third character in most of you strips. What does RI/Jamestown mean to you in terms of the backdrop of your illustrated world?

Ah Rhode Island… it’s a lovely a place. And It’s where I live and I think it offers something different to the comics page. I love looking at vintage Popeye comic strips, on the docks, kinda rough, but a serious nautical feel. As for Ordinary Bill, I think it helps define the characters better. Giving them a place and a home and an identity. Plus It has the potential for beautiful back drops. And of course it offers (in my opinion) a unique set of characters, like talking clams, and aggressive seagulls, and sea monsters.

Congratulations on the engagement! Very sweet proposal. So, does this mean a wedding to plan for Isis and Bill?

Thank you—we’re pretty pumped. I’ve thought about adding a storyline of getting married. I’ve seen this done a few times in other character story lines and different comics. It’s always a little too shmoopy for me, If I can write a story line that I think represents the characters well and has the playfulness that Isis and Bill display, then I will. But I have till October before I have to tackle that.

Do you have any future plans for Bill? Any changes in the strip of the character that we should look for?

Changes eh? none on the foreseeable future. It’s been going real well with my syndicate, GoComics, and it’s just starting to get a solid following outside of Rhode Island/ New England. I plan on staying the course for a few years. I’ve always tackled with the Idea of adding a kid, I feel like that would really mix things up and bring out sides of the characters we’ve never seen… but it would drastically alter the strip. At that point I may just start a new Comic Strip…But again. that is very far in the future if I do go that route.

For more from Will, Bill and Isis, go here! 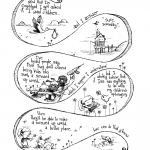 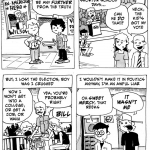 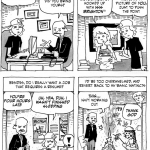