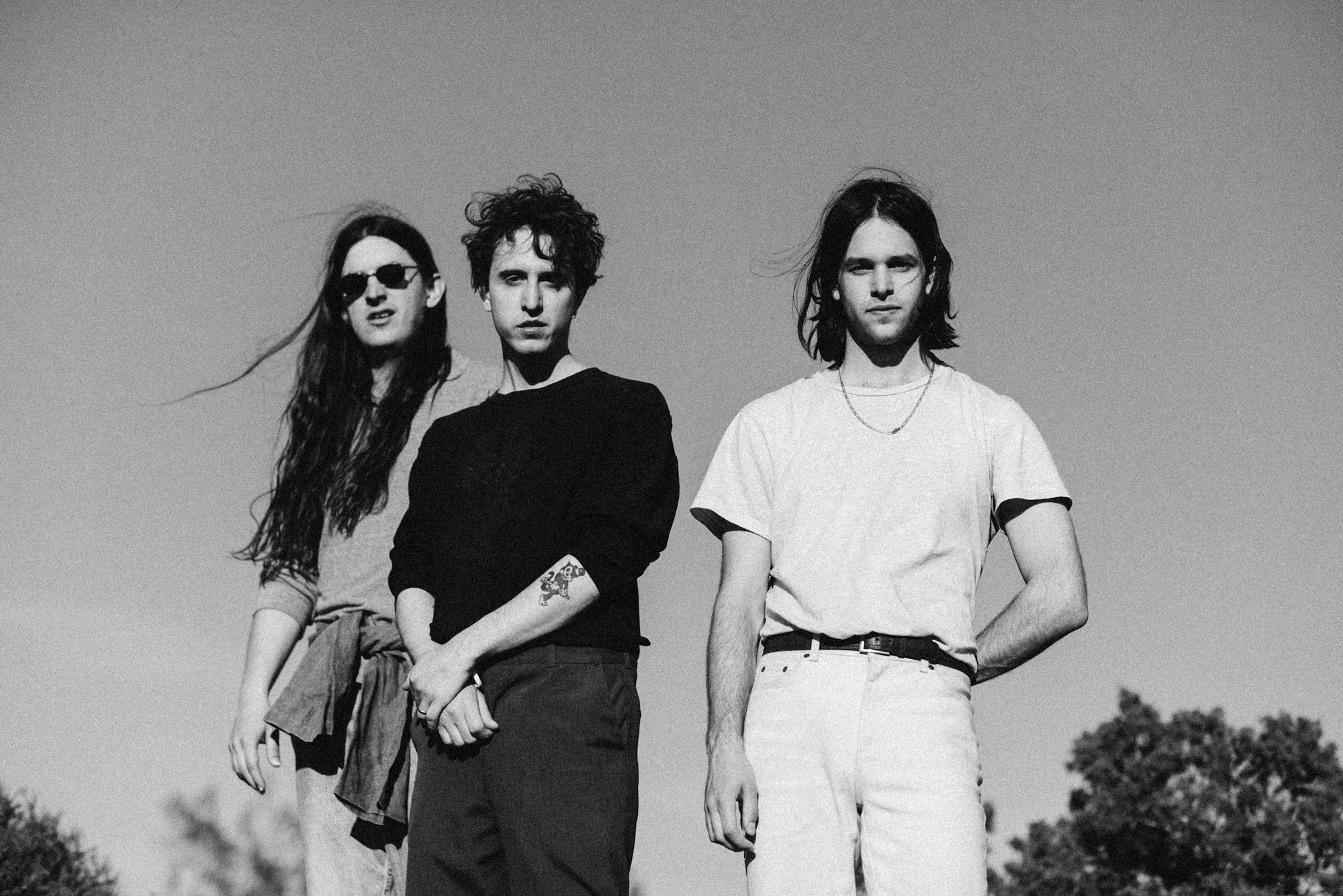 Beach Fossils Dish About Their New and Most Nuanced Album Yet, “Somersault”

The music video for “Sugar,” the sixth track off of Beach Fossils’ recent record Somersault, opens with the trio (composed of frontman Dustin Payseur, Tommy Gardner, and Jack Doyle Smith) rolling backwards on skateboards on a New York sidewalk. The camera comes closer and closer, into an isolated shot of Payseur alone – frowning and unflinching.

The video then cuts to the band whizzing across the streets of Brooklyn on the boards, which were made in a collaboration with Habitat Skateboards. The video is a love letter to New York, we watch them on a sunny day in the city as they pass brownstones, through parks, and alongside the J Train. They’re dicking around – dunking on a basketball court and playfully flipping each other off – until the final shot. They’re off of their boards and it’s night time, their backs turned to Manhattan, and they are no longer smiling. It’s a video of three young guys having fun in New York caught between images of loneliness, darkness, and its escape.

Payseur was surprised when I told him that Somersault felt darker to me than their earlier records, and asked if I meant that musically or lyrically. I told him that I thought so lyrically, and after a pause he responded saying, “huh, okay. I guess for a while the earlier stuff was like escapism from depression – just like, you know, kind of like being a time capsule for what’s enjoyable, I guess. And with this one it just started out coming out kind of sad – and I was just like fuck it, this is just how I feel, I wanna write about how I feel, I’m not gonna fake it.”

This “fuck it” style of songwriting, a willingness to grapple with big things, is a large part of what makes Somersault so compelling. In “Saint Ivy,” the album’s third track, Payseur tries unsuccessfully to find something larger to cling to, with the second verse saying “How to find a reason / television and another headline / don’t believe in Jesus / heaven knows I’m wasting my time / Wanna believe in America / But it’s somewhere I can’t find.” In “Down the Line,” the album’s ninth track, Payseur sings of self loathing and feeling like he’s losing his mind. In the final track on the album, “That’s All for Now,” Payseur sings of the relatable experience of coming back down after a day of fun – “That’s all for now / Nights that we forgot / Everyone wants / But I woke up back again.”

That’s not to say that there aren’t still remnants of the sunny, beachy escapism of their earlier records like their 2010 self titled or their 2011 follow up What a Pleasure. We get this first in the album’s opening track, “This Year.” “This Year” starts with the same upbeat, enchanting guitar hook and sparse vocals of some of their earlier records. The song builds nicely in the chorus with Gardner’s drumming.

Somersault is in many ways the most mature album put out thus far by Beach Fossils, which I learned about in a recent call I had with the band. Payseur told me about how as a teenager he always had skateboards designed by bands he listened to, making the collaboration with Habitat a true achievement.

On Somersault, Beach Fossils experiment with new musical styles and arrangements, which I discussed with Gardner and Doyle Smith. The album was created by building and layering melodies and arrangements – often starting with one core idea and then building outwards.

The album cover – a white square with a Beach Fossils logo in red at the top right corner – is the first of the band’s album covers to not be in black and white. “I went to the Natural History Museum and was looking at Chinese artworks where the artist would always put their stamp on it in red,” says Payseur. “I really liked the texture and the color of it, and that idea sparked the design for the cover.”

Somersault is also the first Beach Fossils album to be released on Bayonet Records – a record label co-owned by Payseur and his wife Katie Garcia. On releasing an album on his own label, Payseur remarked, “It’s always been a big goal of mine. It’s nice because I don’t work well with pressure, and I have a problem with authority figures – even if it’s just with a label that’s really nice to me.”

Somersault, the first Beach Fossils record in four years, was well worth the wait. The music and lyrics of the album are a great achievement, which are much in part due to Payseur’s departure from lyrical escapism, and the wiggle room provided from working for your own label. And what’s next for Beach Fossils? Lots of touring – the dates of which are available on their website.