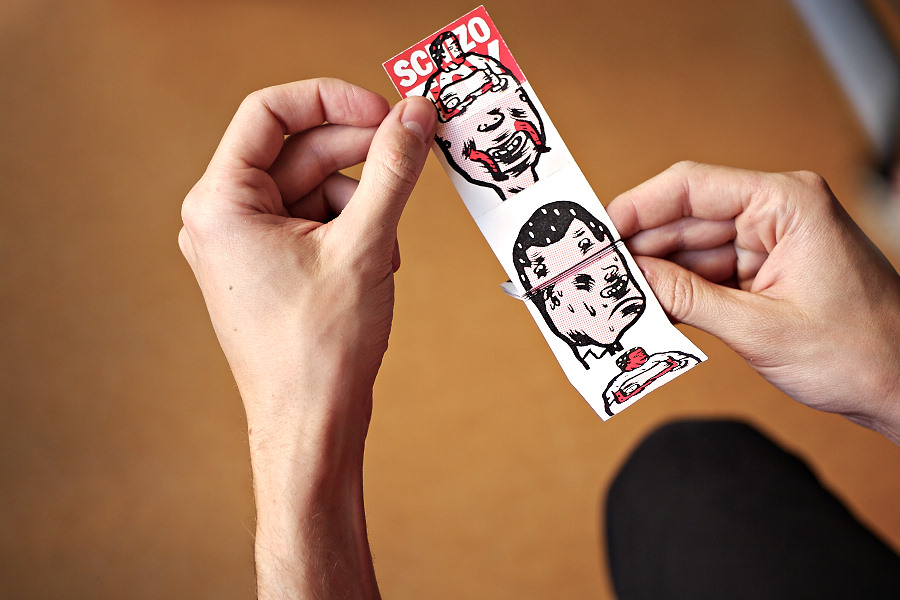 Between The Lines With B.ü.L.b Comix Publishing

“The will to connect and publish others.” That is what drove Nicolas Robel and Mathieu Christe to create notorious, independent sequential art publishing house, B.ü.L.b Comix. Imagined in 1996 and officially founded in 1997 with beginnings that revolved around the tradition of sharing ideas, B.ü.L.b Comix has since published some of the world’s most talented artists.

There’s no doubt that we here at Amadeus love print. However there’s print and then there’s innovative, boundary-pushing print. Among the handful of studios around the world pushing the boundaries of what comics and books mean, how they’re made and what they contain, B.ü.L.b Comix runs with the best of them.

Amadeus caught up with the publishing gurus to talk “comix” books in the digital age, dream collaborations and more.

Let’s start with the backstory. Nicolas founded B.ü.L.b in 1997 — what were the two of you doing before that?

The two of us were studying visual communication at the local design school. At that time, a positively special era, Geneva was said to be the most squatted town in Europe, often compared with Berlin. Lots of affordable space and much going on. The illustration and comics scene was vibrant, drawing emulation and collective publishing efforts.

To be precise, B.ü.L.b comix was tested (with the release of Sûre by Alex Baladi which sold out the entire print run of 100 copies in one evening) in 1996 and founded for real a year later.

What was the catalyst for starting B.ü.L.b comix?

The will to connect and publish others. Our drawing activity among the local scene, as well as Nicolas’ interest (being a Canadian) in the North-American one, played a crucial editorial role. B.ü.L.b comix pioneered in translating works from John Porcellino, Ron Regé Jr. and Tom Gauld. As authors and having both been published, the experience of being on the other side also brought a reflective and welcome perspective.

Developing a full editorial program was the original idea and the essential catalyst. Economically independent, the bulb-ecosystem was the master plan. Being able to produce locally, high quality books with a low one-off investment, putting out new releases only from sale benefits, was part of the plan. This down-to-earth approach guaranteed a total editorial freedom. Obviously, it makes no sense to publish for the money if you don’t earn any.

What’s the story behind the B.ü.L.b comix name?

Originally B.ü.L.b comes from the English word “bulb” encapsulating: light, idea and creativity. B.ü.L.b stands for «Bandes dessinées ütopiques à Lire dans son bain» in French.
The use of both lower and upper case letters, along with a u diaeresis (a reference to German language) and periods, help transform the word into a mark, which can be easily reproduced with a keyboard. Smart, low-key branding in a way.

Why do you guys insist on making books in the digital age?

Our books are tactile and tend to be object-oriented. Although very analog by nature, our publishing venture likes to take advantage of the digital world to promote its catalogue. For example, our online shop helps us reach readers all over the world. We’ve also been experimenting reasonably with social media to spread the word.

As an independent business, how do you see B.ü.L.b comix’s role in the community?

We support the craft community by producing (printing and binding) locally. For example, Limbo dupplate, a limited skateboard edition, was entirely produced in Switzerland, including the manufacturing of the board. Only the wood comes from abroad, Canada to be precise on the map. We also support ourselves as we’ve been running without any subsidies from the beginning. We pay authors with books and dedication but don’t earn any bucks from B.ü.L.b comix. Every cent gained is reinvested into new projects.

You recently moved into a new studio space. Tell me about the new space. Why did you guys move from your other studio?

Our book storage used to be located at the top floor of an old factory in the center of Geneva. The space was part of a collectively run building full of artists’ studios. Our atelier was in another building, independent. Following an important renovation, we were offered the welcome opportunity to gather humans and books in a bigger space.

Worth noting, the collective named Association GUS, which we’re active members of, fought actively to preserve these spaces. As with B.ü.L.b comix, we like to say “We’re still here, you bastard!”.

How do your collaborations come about? Do artists pitch to you like a traditional publisher?

Except for one or two spontaneous calls for publishing, we invited the artists to be part of our catalog. Sometimes published ones would recommend interesting artists. Most of the pitches, although carefully studied and politely replied, were rejected. No good surprise, unfortunately.

Is there any type of subject matter you absolutely wouldn’t cover? Does B.ü.L.b comix have a politics?

Any meaningless violent and gratuitous content is prohibited. It just doesn’t fit well. The choices made so far are based on a balance between the drawing and the story line. We’re a bunch of melancholic sissies thrilled by insane utopia.

Would you say that the books B.ü.L.b comix is creating are not just books, but works of art in themselves?

We wished to publish books. We were fueled and motivated by drawings and stories, so it made sense to publish illustrators and graphic novelists. But pretty fast and from the very first beginning, we’ve realized we wanted to design, publish and distribute timeless books not related to any trends. Eighteen years later, the experience is very positive, we’ve achieved to be part of contemporary art books collections without any shame to present excessively crafted comics related content.

Why only print a book once? Why no reprints?

If your print run is 1000 copies at most and your titles special, sold out is a distant future celebration. In this context, it’s hard to imagine selling a lot more from a second printing, not knowing how long it’ll take to sell out again. With the initial printing comes the motivation. With reprints, the motivation vanishes or tends to shift.

With a no-pulping-ever policy, storage space needs to be taken into account. We also enjoy the idea that once it’s gone, it’s gone. There’s an end to each book. It’s the same with the whole project. B.ü.L.b comix stopped publishing (don’t get us wrong, we keep on selling and advocating the full catalogue) in 2013 with the release of 2wBOX Set Z. In the 2[w] collection, every BOX is numbered with a letter, running from A to Z. We used it as a final countdown (essential, not because of a devastating financial blow).

Anything really cool coming up for B.ü.L.b?

More printed publications. Firstly, bülbooks a new publishing house offering practical guides with more texts and theories. After 18 years of publishing sequential art, we felt the need to reflect on our practices and explore new trails. Nicolas is the guide.

Secondly, La Police another imprint, dedicated to type design is about to publish the first issue of a yearly bulletin. Mathieu is the commissaire. We are currently developing new editorial visions individually but always in dialogue.

More like a dream project. We were thrilled by the idea to add a new collection, 15[w] (along with 2[w], 25[w], 40[w] and X[w]), with a special Japanese folding trick. Everything was ready and the artists selected but for obscure reasons, it never happened. We’ve been able to foolishly reproduce the folding trick by hand at 4000 copies with our last catalog. 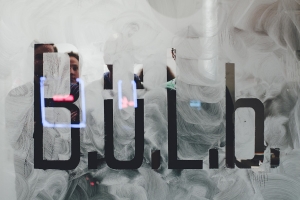 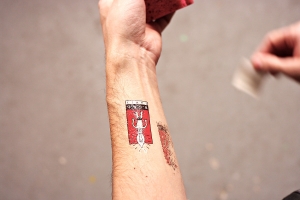 Temporary tattoo, produced on the occasion of the 10th anniversary, 2007 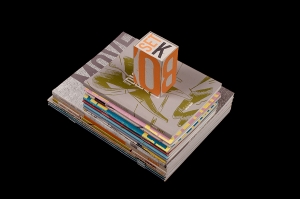 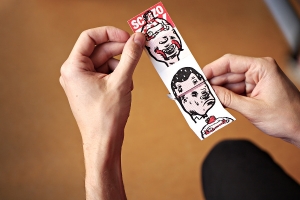 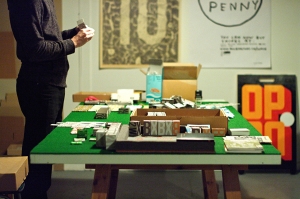 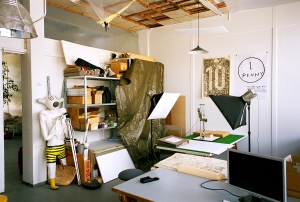 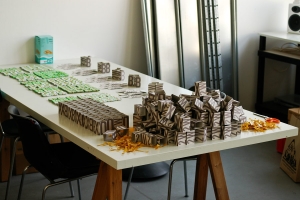 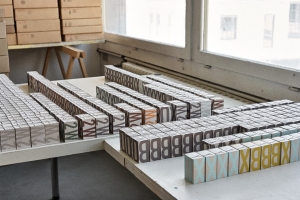 Various 2wBOXes, ready to be cherished 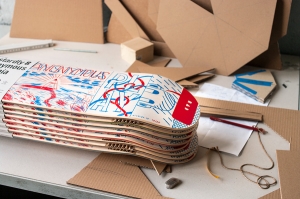 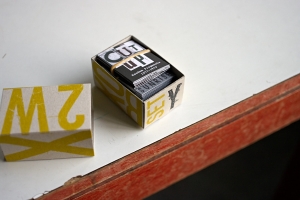 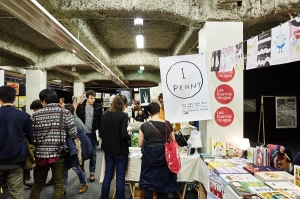