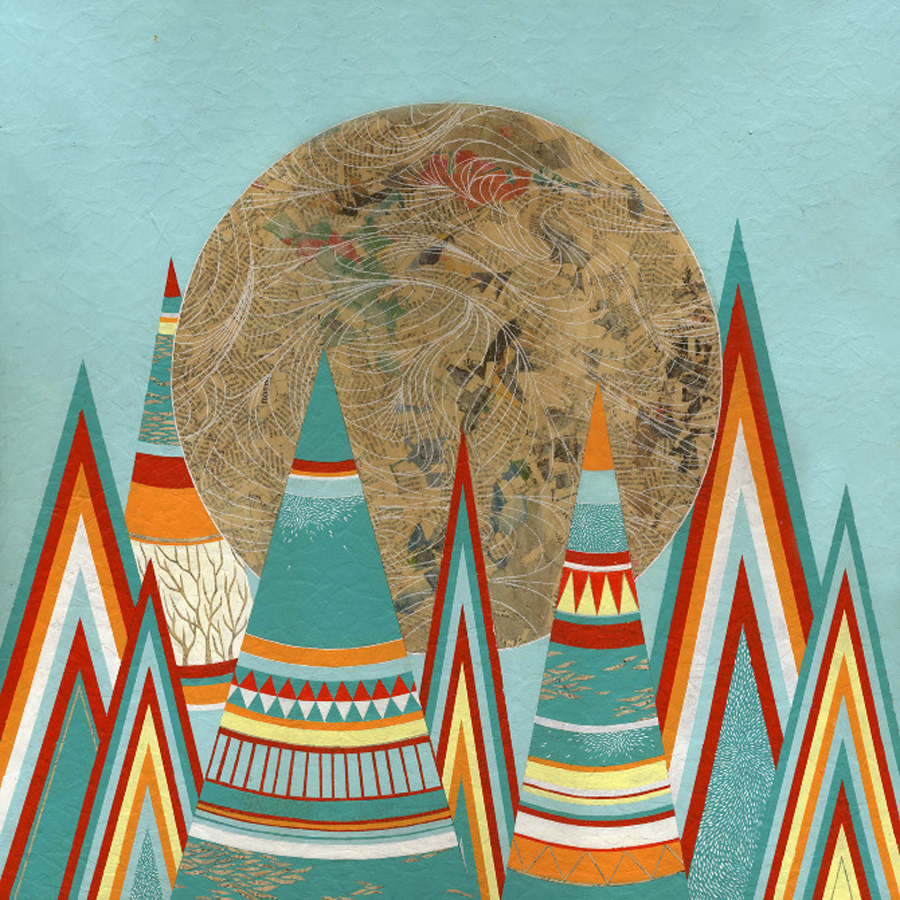 Between San Diego and Long Beach, surrounded by the natural color palettes and laid back vibes of the beachy cities and its bordering buddy, Mexico, lives artist Ariel Wilson. In delicate details, Wilson vibrantly articulates her rich surroundings with an observant and caring eye—a guardian of her Southern California hometowns.

Literally painting her community – Wilson’s current project involves completely redesigning the library at an at-risk youth center where she also teaches art classes –  Wilson emits an artistic air to a generation of future influencers. From skateboard decks, iPhone cases, the interior of the Oak Grove Youth Center and gallery walls throughout Southern California, Wilson’s works of figures and words come in clusters on her intricate paintings that can be reminiscent of shop signs, with cartoon-simple forms and words in decorative but concise antique typefaces. Thick hints of a deep history and the development of personal identity repeat in lively, almost celebratory, colors and patterns; they desensitize the eyes and the topic making light of life in turquoise and reds like sand.

Her imagery on each canvas – walls, wood, shower curtains, pillows, the whole lot of home accessories- bridge periods and styles. Skateboards, travel accessories (Wilson grew up skating and is inspired by her love for travel) and gnomic words mingle with old-time typography and a quite obviously beach-inspired palette. The result feels definitively “Southern Californian” but also suggests a sort of out-of-time commercial art, where old, imported graphic conventions are kept current in the present, inventively jazzed up but also tinged with nostalgia.

First things first, give us the Ariel Wilson spiel; who are you? where are you from?

I’m a freelance artist/designer from Southern California, and I’ve spent most my life between Long Beach and San Diego. I did my undergrad in San Diego (UCSD), and I just recently moved back up to Long Beach. I teach art 2 days a week with at-risk youth who live at Oak Grove Center in Murrieta, and the rest of the week I work freelance. Right now I’m working on redesigning a few buildings at the group home, and am also making new paintings for a show at Empire Seven Studios later this year.

What are some similarities and differences between your design work and your art?

That’s a good question and something I think about a lot, because I work in two modes/styles. I feel like my paintings and my design work have distinctly different motivations and inspirations, but I like layering and narratives, and I think that shows in both.

It seems like a lot of your pieces incorporate or have a travel theme, or references to travel and destinations; how important is traveling in your life?

Very! I’m heavily influenced by folk art, and communal histories/story telling and travelling is the best way to experience and explore those things. Mexico is easily my favorite place to go. Growing up close to the border probably influenced that, but I love any place that is brightly colored and a little rough around the edges. The development in many of Mexico’s cities has happened at a different pace than it has elsewhere, which makes it feel historically richer, and more interesting to me.

How did you get into illustration and textile design?

I started painting and making things when I was 4 and It’s been what I wanted to do with my time ever since. I started designing more interior living products the last couple of years because I was doing room makeovers for the kids I work with at Oak Grove Center. I’m working now on a series of illustrations based on popular books for their library redesign. I’m really excited about how they are turning out and how well people have responded to them.

So much… I’m really interested in social disasters like the Xhosa Cattle Killing in South Africa, the Ghost Dance movement in the US, and failed anti-colonial movements in general, particularly those that are prophecy based. The futility and the longing inherent to those events is something that I think about a lot with my paintings. I’m basically inspired by anything old that feels like it has a story or a secret.

Let’s talk color palette; we see a lot of oranges paired with teals. Do you like to stick to a particular color scheme/palette? Where do you these colors come from?

I get asked this a lot and I’ve never formulated a good answer. Orange and Teal just make more sense to me than other colors do. They are happy and bright, but also conjure a vintage or folkloric feeling. Having a set color palette allows my work to have an organized, cohesive look despite how detailed it all is. It also makes buying paint really simple.

Do you skate? How did you get involved with creating art for skate decks and skateboard racks?

My connection to skateboarding… It’s something I don’t think about much because as long as I can remember it’s just been there, and been something I grew up around. Skateboarding and art seem really parallel to me in a lot of ways. Most parents aren’t going to be that excited if you tell them you want to do one of them for a living, or worse, for free. We’re kind of outsiders in a lot of respects and tend to look at the things around us differently, or at least more acutely than others will. I grew up in a relatively small suburban town with the same group of kids from kindergarten to high school and I didn’t know any other artists besides my sister and me, so I guess I gravitated toward skateboarding because of like-minded people or something. After high school I got too consumed with art to do anything else with my time and now I only skate to get from point A to point B, or to get a break from being inside.

That’s probably the thing I like least about being an artist. I feel like I’m inside too much and I really envy people that can be outside with their friends all day. Sometimes when I get sick of being alone in the house I’ll drive my cousin and his friends to spots and draw while they film, but my work doesn’t lend itself to doing that too often

Talk to us about the ‘Infinitesimal and the Infinite’ series; how did it originate? They seem like intricate and detail driven pieces. Tell us about materials you use.

“Infinitesimal and the Infinite” is a painting series I’ve been working on for the last 4 years. Its an ongoing illustration of a fictional history of origins and is informed by an interest in twin rituals, folklore, secrets, and untold or forgotten histories. I have always been somewhat frustrated by a lack of understanding of my own family’s history, in part due to the presence of Alzheimer’s in our lineage. I am really interested in the idea that our memories and stories act as serial planes that make up the bulk of our identity. In keeping with that notion, most of what I make involves a process of layering information, and then obstructing and revealing bits and pieces. This particular series is newspaper on wood panel with acrylic, and I frequently cut back into the layers of paint and paper to reveal bits of text. I go through a hell of a lot of xacto blades but it’s fun, meditative work. 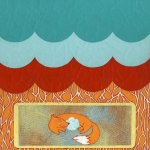 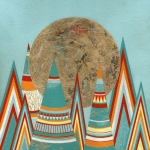 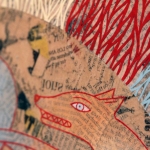 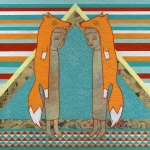 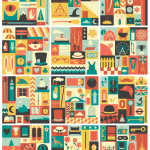 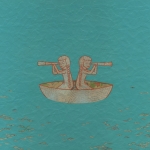