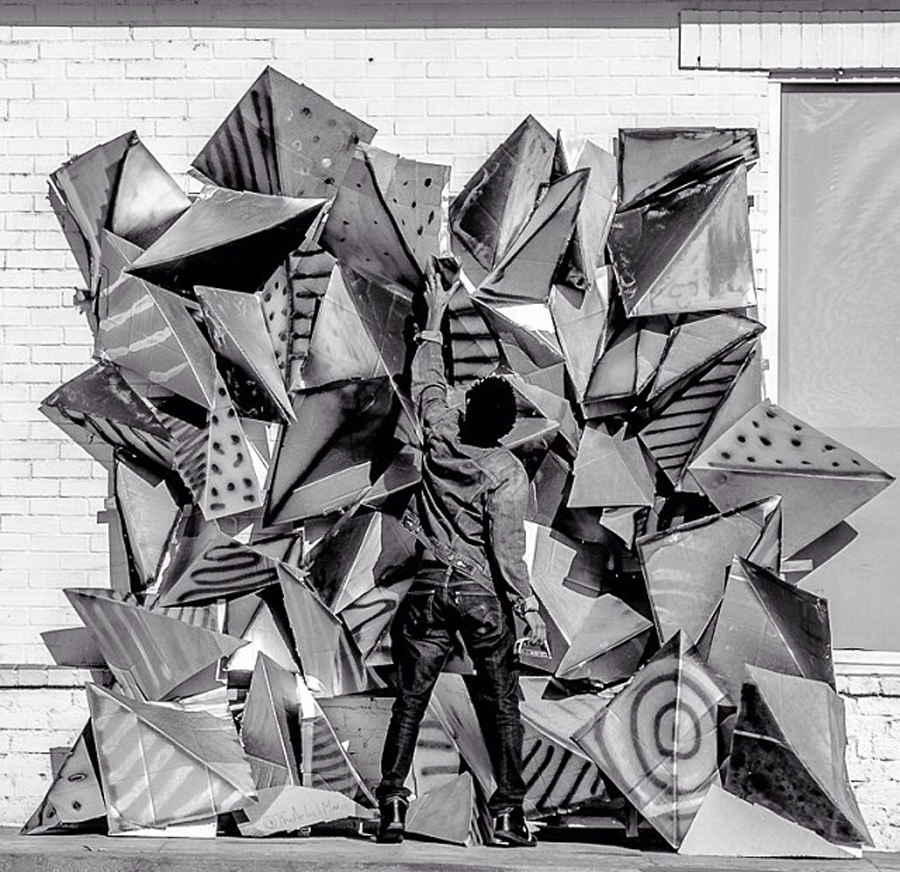 Marie Adams, AKA The Artist Marie, was like a hermit for six months while she brainstormed how she could bring her paintings to life. The Los Angeles based artist had been making paintings that depicted intricate geometric shapes, but quickly realized paint on canvas simply couldn’t properly translate her artistic ambition to create something more tangible. She knew she wanted her art to be exhibited publicly, but didn’t want to deface anyone’s property while doing so. After holing herself away, Adams crafted an idea to make the geometric shapes seen in her paintings into actual, life-size sculptures that would rest on public walls and on the medians of traffic-heavy streets throughout Los Angeles.

With a little bit of wood and a grip of recycled materials, including repurposed cardboard, Adams fabricates large-scale geometric sculptures that stand as unique pieces of tessellation-like art and serve to augment the normative city landscapes we pass by every day. While her works might leave you puzzled on how they were constructed, and are both very architectural and artistic, Adams’ main focus is on building each piece so that it works intrinsically with the energy and structure of the public space she has chosen to place her sculpture.

Have you always worked as a tessellation or sculpture artist?

I have kind of been an artist all my life, but I was in the Army Reserve since I was 18 and originally did photojournalism. After the Army I went to college for photography and then to the Art Institute in Washington D.C. where my work kind of blossomed into other mediums.

What was your experience as a photojournalist in the Army?

It was amazing; I got to travel all over the world and encounter different aspects of the Army, not just one particular job. My job as photojournalist was to tell the story of the different Army jobs and positions, from the lowest ranking soldier to jobs you don’t hear about ever, like cooks, bath and laundry workers. Being able to travel and explore aspects of the Army I hadn’t before definitely opened my eyes to being more creative.

Do you think your traveling has an influence on the art you are making right now?

It sure does. When I was in the military I was always trying to get a reaction, as far as taking interesting photos, so that people would be more interested to read the article it was paired with. Meeting different people and traveling around helped me to learn what intrigued people most.

How did you end up in Los Angeles?

After college I always wanted to move to CA and I had friends on the East Coast that said you either need to be here or in Los Angeles, so I got myself together and I decided to move out here. I came out for trip and I loved it, came back, and that was it. I’ve been here for two years now.

Tell me a little about the art you’re making right now, the sculpture pieces. Was that something you have been wanting to do for while?

My sculptures – dynamic augmented assembly – are an evolution of my paintings, and my paintings are an evolution of my photography. When I was doing my painting, I met a curator that came to my house and gave me the whole speech saying, ‘Yeah these are cool, but are not really your forte.” I could have been crushed, but I just stepped it up instead. I was doing a geometric painting and I wondered why I was doing a three dimensional painting when what I really wanted to do was create. So I started to physically make what I was painting.

One of my inspirations, Natasha Frisch, is an artist out of New York and creates geometric shapes out of tape. She would go and make these sculptures in the street and Police wouldn’t mind because it was removable and not destroying any property. That gave me the idea of creating something that is not permanent. I also wanted to be eco-friendly especially because I knew these would be torn down or thrown away. So I came up with using recycled materials and objects found around the city to construct these. A lot of the material I work with is wood and cardboard and it is donated or collected or given to me by friends and family.

How do you actually put these huge sculptures together?

Sometimes I sketch, but mostly coming up with the way it will look is done on the spot. It’s a play on the environment and landscape. I want these sculptures to compliment the area it is in. I will get my materials and I will sit down on the street and cut the boxes and spray paint them and then assemble them onto my wood frame. I build the frame as large as I want the sculpture to be. Lean it up against the wall and then I staple the boxes to the frame in the shape I have deciphered.

You’re doing all of this during the day, in public spaces, and no one usually gives you grief?

Have you ever been approached by police when you were putting your pieces together?

The very first time I did a piece was New Year’s Day downtown, and a cop rolled up into the driveway of the sidewalk I was working on. He just started talking to me and asking what I was doing, but not in a threatening way. He asked me what the piece was for and what I planned to do with it. I told him I was creating an art sculpture to put on the median of the street, and just continued talking very friendly to me. He didn’t seem to mind or ask for a permit or anything.

I imagine that since these sculptures draw so much attention they probably get taken down pretty quickly as well.

They last a good five days. Unless weather gets to it. I had one that got trashed by the rain after three days and I ended up taking it down because I couldn’t stand to see it withered like that. It’s cardboard so that’s going to happen.

Does it bug you when they are taken down or is that part of the artistic process?

It’s part of the process; I know it will be taken down. You know, it’s all for the people, and I leave it to them to see it as they want. When I build the frame and lean it against someone’s wall and finish the piece, I hope they see the beauty and the respect of it. They have the option to take it down or not. It’s different than me just coming in and doing something crazy tag on someone’s wall and him or her hating it and having the graffiti task force paint over it. I have had pieces that were taken down really fast, and the only reason I was kind of hurt was because I put a lot of work into it. I wasn’t mad, I was just like, “okay, it’s for them, it’s for the people, so they’re allowed to do what they want.”

When people walk past these sculptures on the street, what is it that you want them to take from it?

I want people to be mesmerized them. I want it to be like a glitch in time. I want it to make people stop. Like a glitch in the typical city landscape. Breaking up the monotony of the city landscape. My ecological side, it’s demonstrating the possible architectural and structural application of waste material. Something that someone may see as garbage, being used to create something beautiful. That makes for a good conversation piece and raised awareness about the origins and potential recyclable materials.

How do you see these sculptures evolving?

They are constantly evolving. Recently I started doing smaller sculptures that can be installed into someone’s home. They are a little more refined and people have been contracting me to create them.

Any exciting projects you are working on currently?

I recently was contacted by Chicago O’Hare Airport to do a installation in the airport. The airport is going green and they are having an environmental stability conference and they want me to have an installation as well as go and do a live piece. So I will be doing two pieces.

Have you started planning out what you’re going to create?

Yeah, they want me to use the waste from the airport to create the sculptures. So I have to send them some mock-ups of what I plan to do because they are still trying to decide if they want a wall piece or something three-dimensional suspended overhead. I’m excited, I get to do a presentation on my ideas and viewpoint of the project as it connects to sustainability. 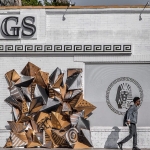 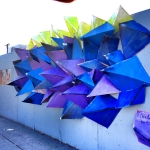 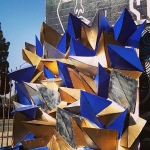 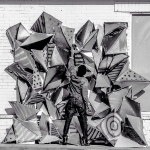