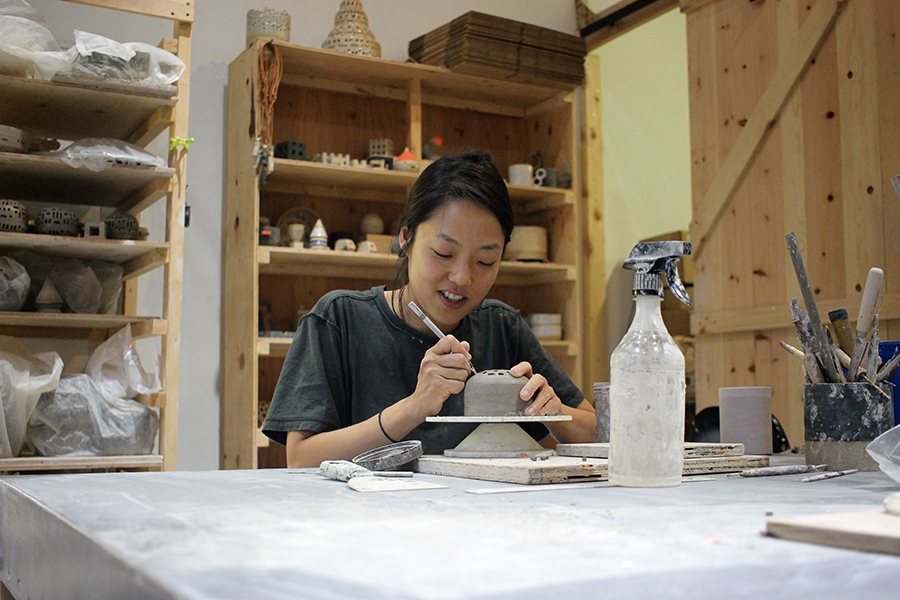 Form and Function: A Studio Visit With Eunbi Ceramics

Eunbi Cho grew up in a strict, traditional Korean family. Besides securing a mundane job, her family expected her to settle down and live a life of domesticity. However “settling down” was never a part of Cho’s plan, and after quickly becoming weary of trying to balance her creative pursuits – fiber art, fashion production, graphic design – and her parents’ wishes, Cho left Korea for Los Angeles.

Convinced not to take any old job that came her way, Cho was selective and devoted to finding work that she would enjoy. After a connection through a friend, Cho began working with well-known LA ceramicist Ben Medansky, where she was not only reintroduced to the forgiving clay medium, but also experienced the dawning realization that ceramics was a path that fully satisfied her creative aspirations.

Now, the ceramics designer and general maker of things is settled and content in her downtown LA studio. The studio is small. High ceilings and cleverly designed storage, studio walls and window frames designed by Cho herself make the limited space feel deceptively large. On the open shelves that line one of the walls sit tools and prototypes of her mugs, bowls, and lamps randomly arranged, and that seem neither under considered nor overly wrought. It is within this intersection that Cho’s work lives, carefully considered and skillfully crafted. Cho’s bowls, cups, and other designs are made for play, begging the user to handle them in multiple ways and uses.

From ceramic knuckle rings and whistles, which she says are part of the “city girl survival kit”, to her discreet hexagon shaped pipes and ingenious “Bake-n-Wake” mug (yes, it’s a gorgeous mug with a built in straw and chillum), Cho’s developed a clean, modern and cheeky design aesthetic that’s creating quite the buzz. We stopped by Cho’s studio where she told us about her Korea to LA transition, the biggest challenges of starting her own brand and what about ceramics intrigues her most.

Tell me about your studio. What about it made you want to be here?

I was working for another ceramicist, Ben Medansky before I moved in here, whose studio used to be around the corner. When I was working with him, I wanted to do my own thing also, and got a space two rooms down from him primarily doing leather making. I quit working for him last year and moved into this spot, which was just that window behind you and then nothing else. It was pretty much a corner of a building. I negotiated with the landlord and told him that I would fix the space up; put some walls up and a door.

You’ve done a serious number on this place; everything from the sliding door entrance to the shelves and window frames.

Thank you, I feel like it’s my baby because I got to make it however I wanted to.

Fill me in on what originally brought you to Los Angeles from Korea.

I was born in Indiana, while my dad was an exchange student. Then we moved back to Korea when I was one. I had a chance to live in Belgium with my fmaily for a while to go to elementary school. I think that’s when I sort of went down a different path than other people and realized my creative aspirations. I went back to Korea, finished college, and was working for a while. I come from a very strict, old-fashioned Korean family, where women aren’t really supposed to do anything. They wanted to me to just get a stable job and settle down, and I wanted to try and find what I really wanted to do. Trying to balance what I wanted to do and my family’s wishes was really hard. They wouldn’t meet me halfway, so I decided to move here because I knew a friend.

I knew that I didn’t want to work an office job, so I searched for something I would enjoy, until a friend said that she knew a ceramicist who was looking for a studio assistant. I worked with Ben for two years and at the time was doing leather making because ethically I thought it’d be wrong to start my own ceramic business while working for Ben. When I stopped working with him, I realized that I didn’t need to avoid ceramics anymore.

Do you find that a lot of your ceramic designs come from the fact that a certain product doesn’t exist and you wish it did?

Yes, I definitely feel this way. Most of the things I make come from the fact that I wanted them or need them.

What was the first ceramic piece that you designed for your brand Eunbi?

That would be the Pomo Tea Bowl; they are a play on traditional Korean cup/bowl, but with handles. In Korea water is really precious, I’m mean everywhere water is really precious, but in Korea they really care. When we eat white rice in a bowl and when we finish, we just pour water right into that bowl and drink from it without needing to clean it because we don’t normally drink water when we eat. So I wanted to create a bowl that could be used for multiple purposes and that was a size that served well for both a rice and tea bowl. Then I wanted to create a different type of handle. My stuff is made for play; each piece usually has multiple ways of holding it and using it.

What inspires your work?

I usually get inspired by nature; just like while I’m riding my bicycle, I can cycle my thoughts a lot and process things. At that moment you just have to focus on surviving, so it really clears your head. Inspiration also comes from me wanting more practical things in my life. I like visual art and things created artfully, but when something looks really nice and it doesn’t look practical, but actually ends up being really practical. I love that.

Do you focus more on form or function? Or do they go hand in hand?

I think they go hand-in-hand. Like those lights over there (Eunbi points to a beautiful ceramic lamp that has several small slits for the light to peer out), they are sculptures, but they are actually functional if you want to use them you can put a candle or make a light out of it. Or they can be a bottle or a vase at the same time.

What’s a project that you’ve worked on recently?

I recently did a show at a small gallery inside the Pacific Design Center. I built out a ceramic cityscape, but you can put candles inside the buildings to light up. Their sculptural but they’re functional.

How did you come up with this idea?

I read this book by Italo Calvino called “Invisible City”, and I’ve always been into cities, buildings, and imagined futures. So when I read the book it sparked me to want to create my own city.

You’ve always been intrigued by cities, how does Los Angeles compare to other cities that you’ve lived?

I think it’s really dry and flat, and it’s definitely intimidating because if you don’t have a car then you’re definitely limited – and I haven’t had a car for five years. I think it was really tough for me in the beginning riding my bike everywhere because it’s hot and it can be pretty boring until you start to find your way around. Once you get to know the city then you find some really cool spots and art shows, and artistic pockets and groups of people. Like last weekend I went to the Watts Towers, which is a fun artistic adventure. I like Los Angeles the more I know it.

Why do you think LA is so conducive for artists and creatives of all types?

What’s been the biggest challenges in starting your own brand?

I think it’s not knowing where to start. Whether it’s getting a space to start or getting a website to start, it’s always a challenge. I always wanted my own business, but I didn’t know what it would be. I tried everything until I got here, and I think trying everything helps. I was working for a boutique, high-fashion brand in Korea, doing sales and buying and dealing with a lot of money. Then I downgraded to a fashion production position and thought I wanted my own factory. I came here and did textile design because I thought I wanted to start my own line, and then eventually found my place with ceramics.

Did you always have that entrepreneurial spirit?

At first I thought I could do the whole businesswoman thing, and travel and be in a suit all of the time, and now when I think of myself in this studio I’m like, “What was I thinking then?” I think when I was in Korea my parents were extremely pushy with regards to my life and the job I was working was just killing me, so in 2011 it was the perfect time to leave and come here.

Do you have any favorites among the pieces you have created?

Actually my favorites are these new lanterns that I’ve been making that you can put a candle or some incense inside of.

What is it about ceramics that really intrigues you?

A lot of things, but mainly the fact that this is first fragile clay, that you could just break. But after firing it at a really high temperature and sanding it, it actually becomes stone. So the process of it going from so fragile to this durable stone is intriguing. Every step is so different that it never gets boring.

It’s cool because the process changes all the time depending on how you fire something or how you glaze a piece.

It kind of reflects the process of life. You start out fragile and as you go on you go through different stresses and pressures and adventures and you become more durable and this nice hard product.

I imagine because you make such cool products your home is filled with other awesome vases, bowls, and accessories. Do you enjoy living with your pieces?

I like having other people’s work in my home, but I truly enjoy having my pieces at home with me. Half of my home is stuff that I’ve traded for with other artists and the other half consists of all the prototypes I bring home to try out and experiment with.

It always consists of ceramics but it’s never the same step in the process every day.

When I come in in the morning I usually make a list and try and cross off everything on my list. If I don’t get everything done then it carries over to the next day. I do the same thing for my studio assistant Nathan, who I work well with. I told him that I don’t care what method he uses – I’ll show him my method and of course he can do it my way if he wants– as long as he gives me the quality that I want then we’re good.

My favorite piece is “Bake-n-Wake” mug, how did you come up with the design?

Well it all started with my love for straws. I love drinking out straws, I even drink beer with a straw, but realized that it’s so bad for the environment, and I wanted to make a cup that had a built-in straw. I also smoke, and came up with this design for a chillum, and then just put the two together.

For more from Eunbi head to her website: www.eunbi.us.

All photos taken by: Alex Khatchadourian 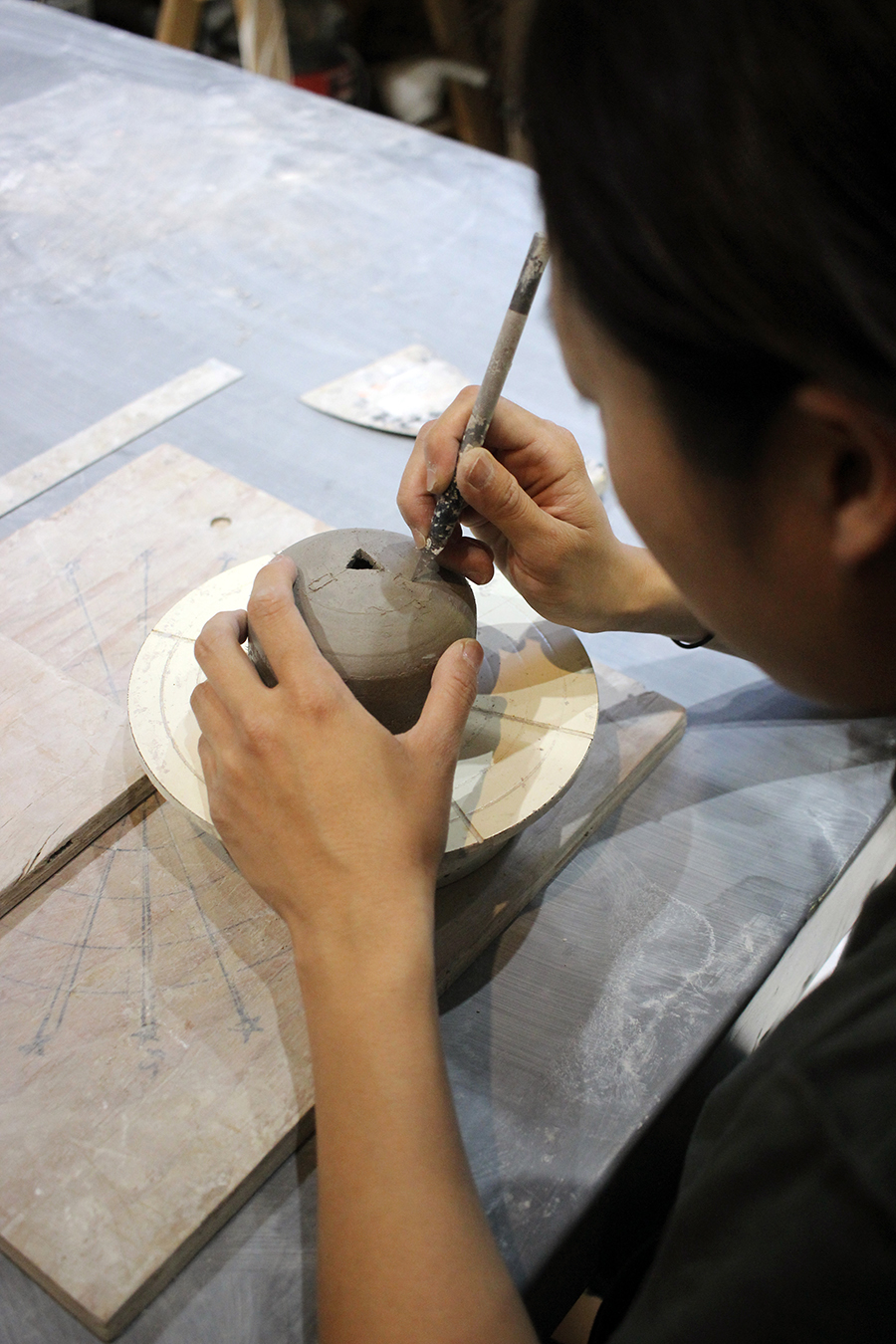 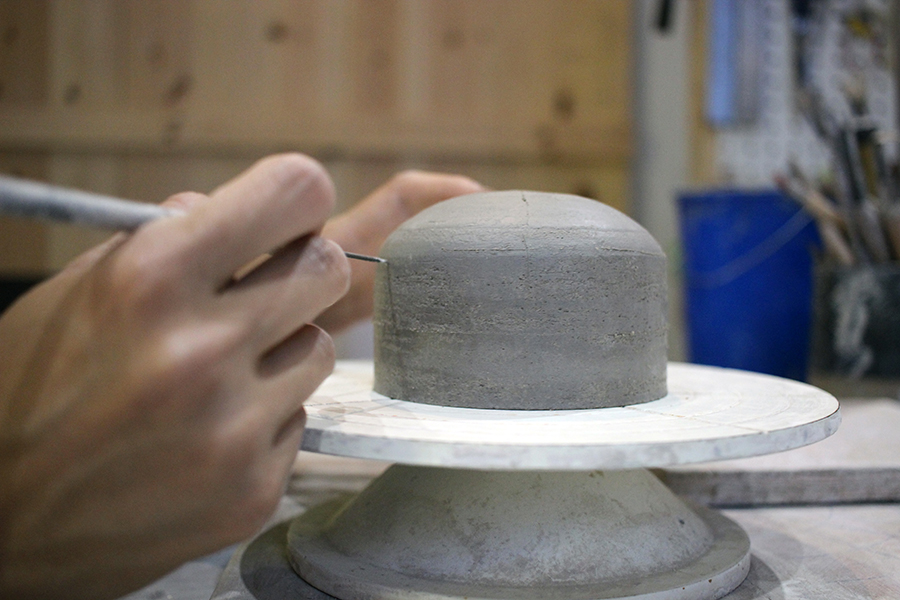 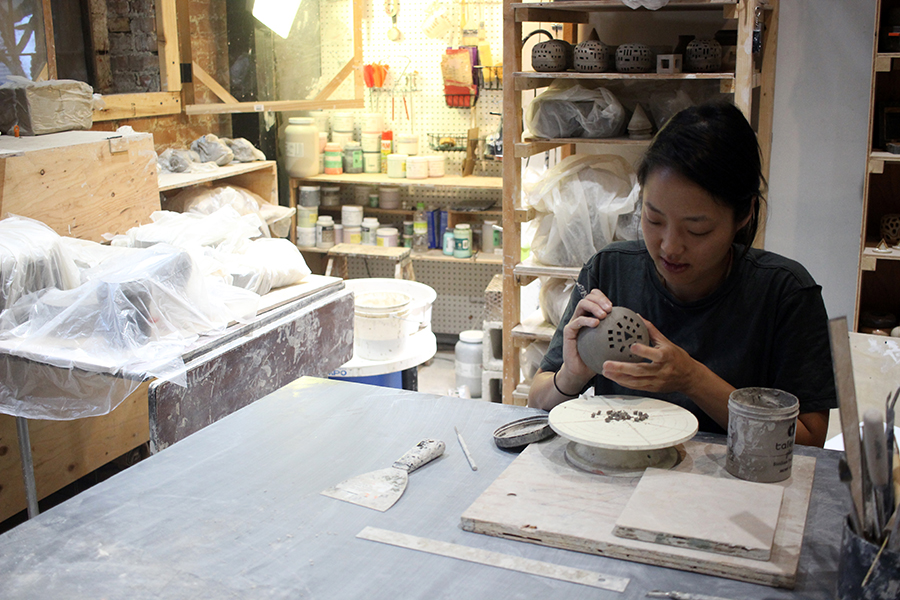 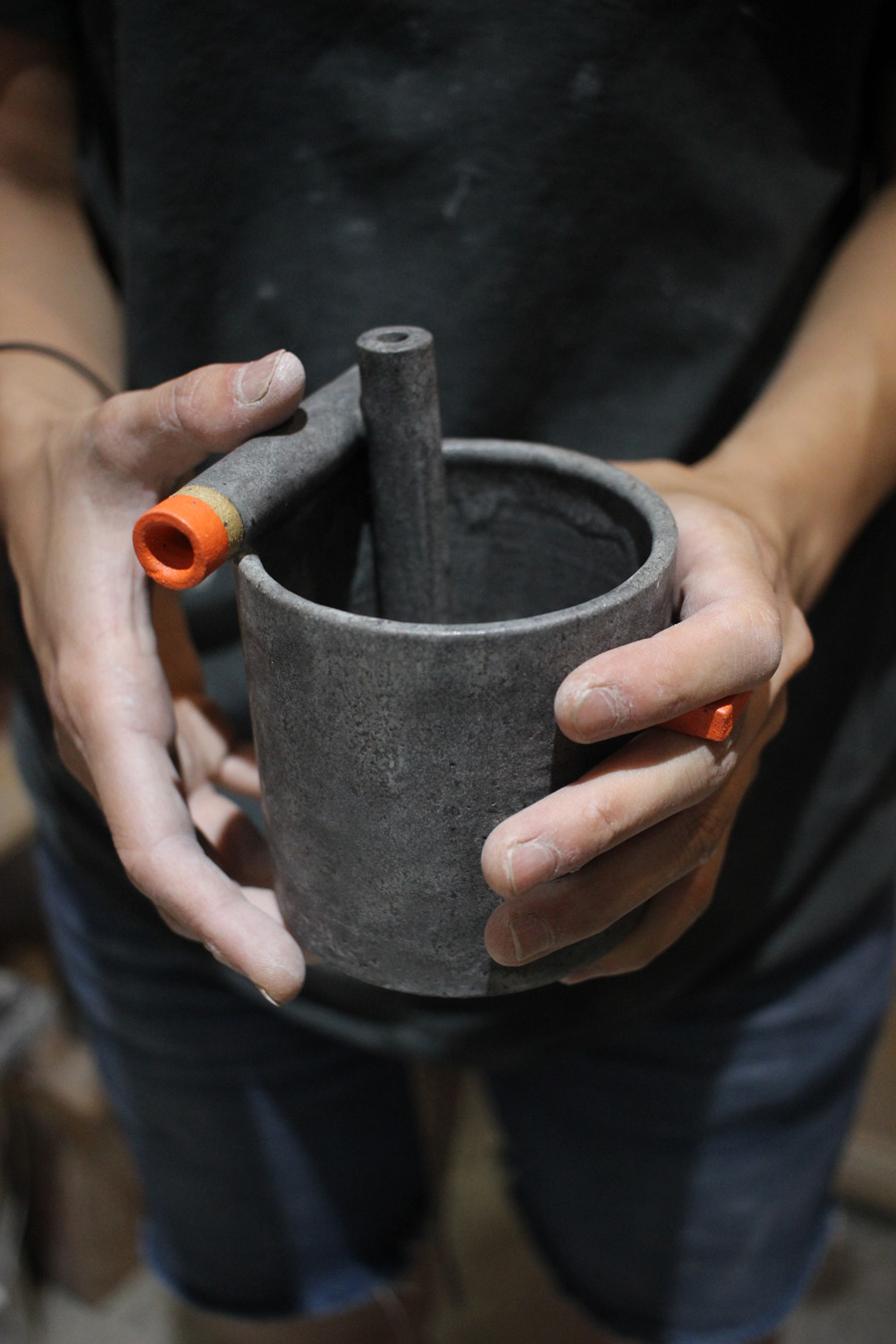 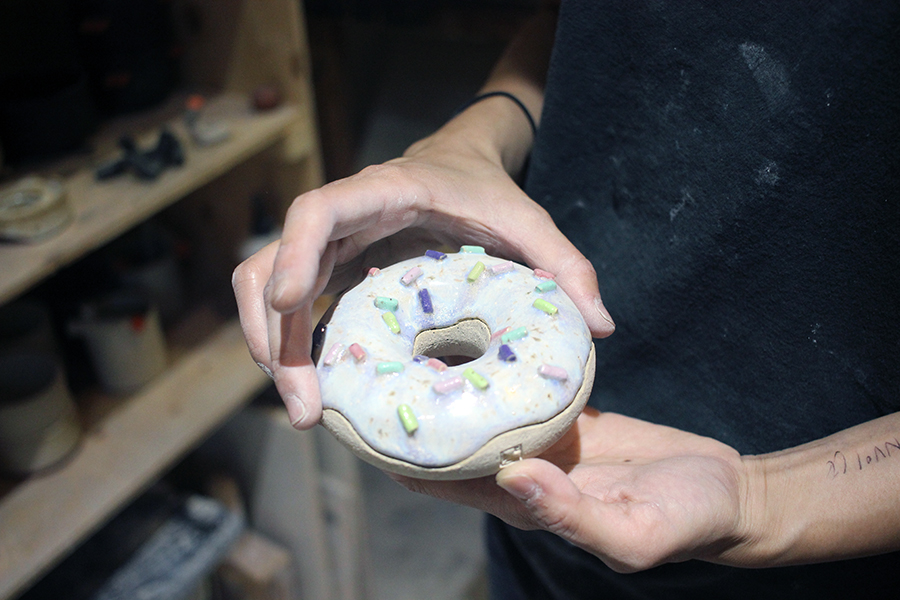 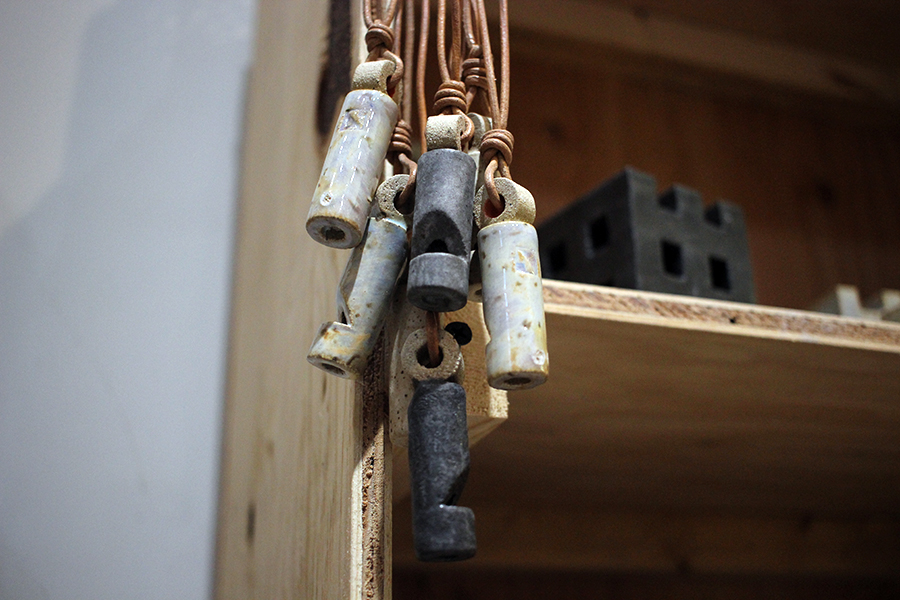 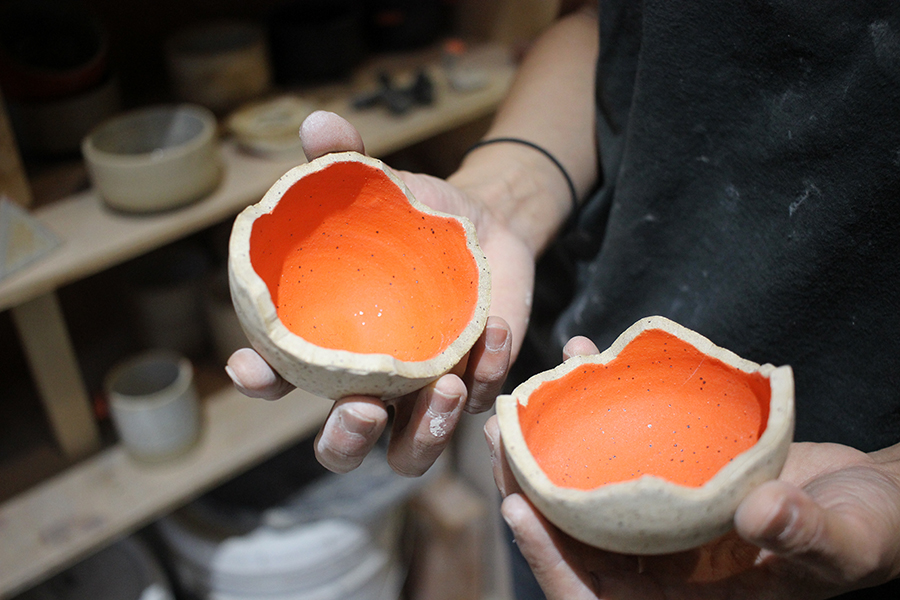 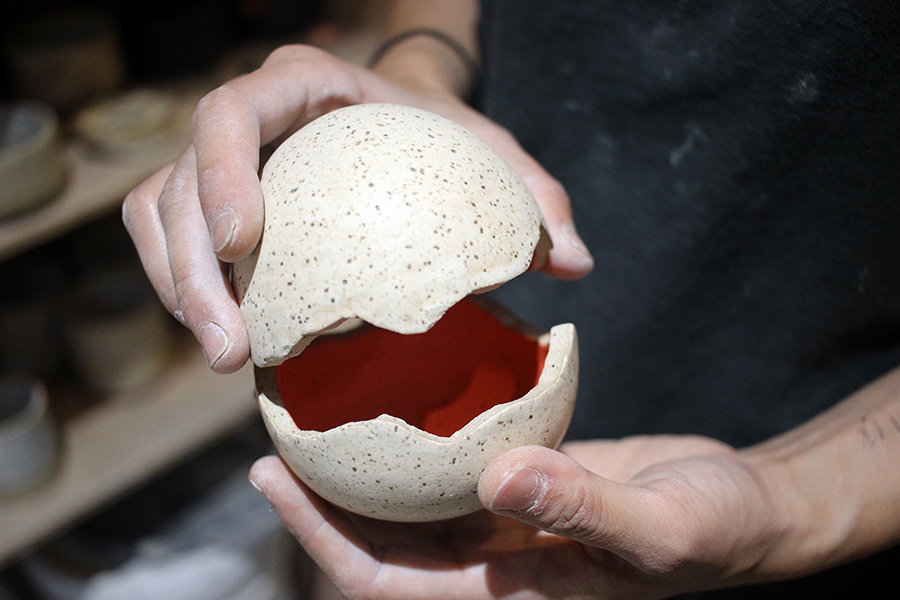 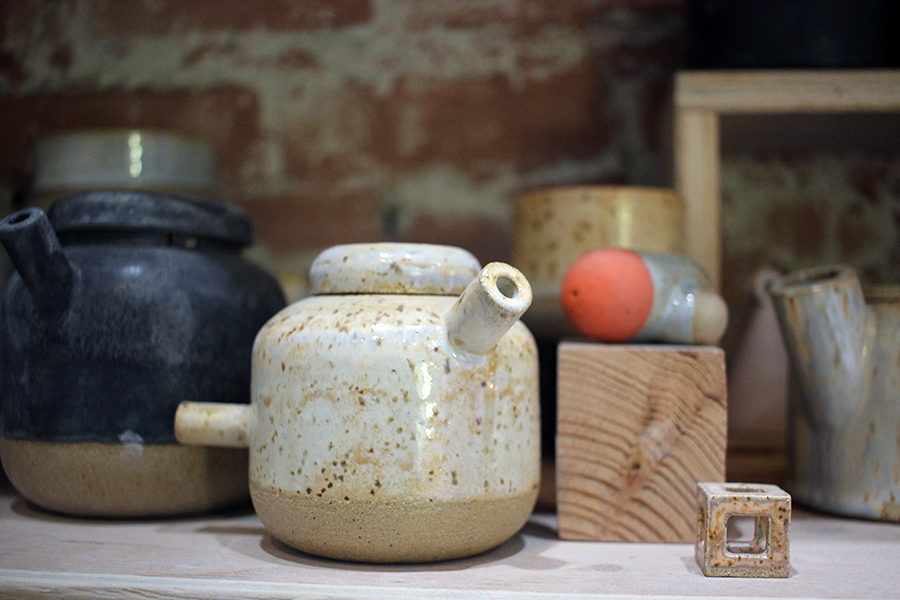 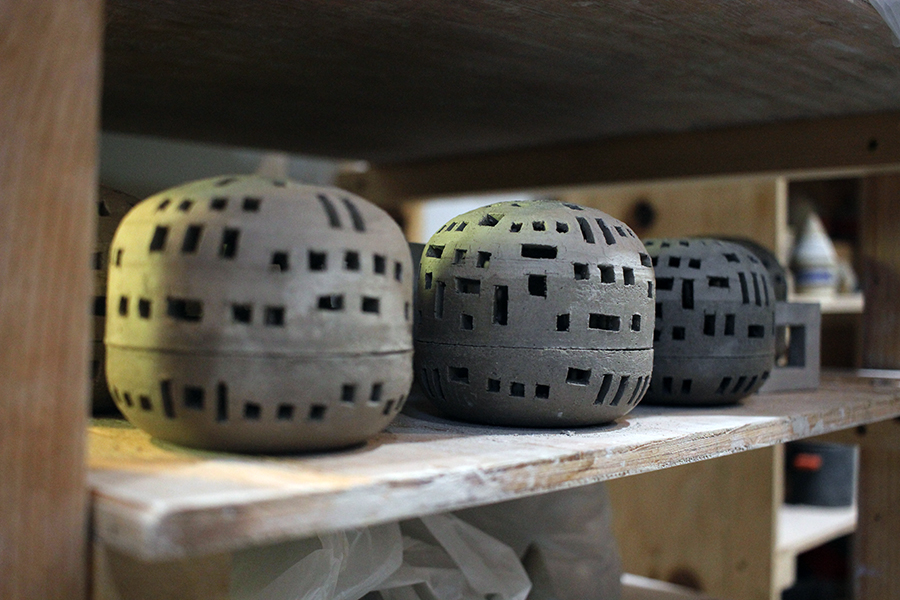 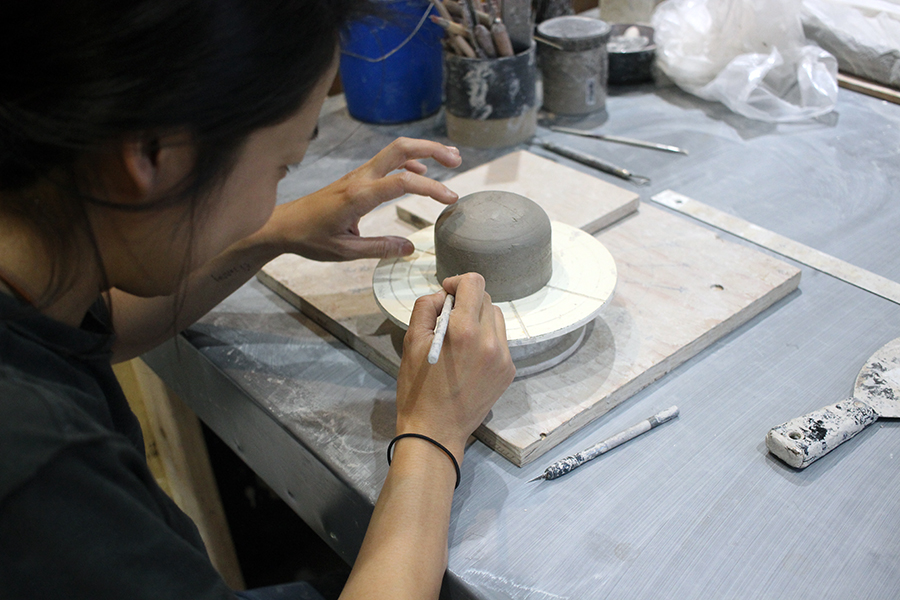 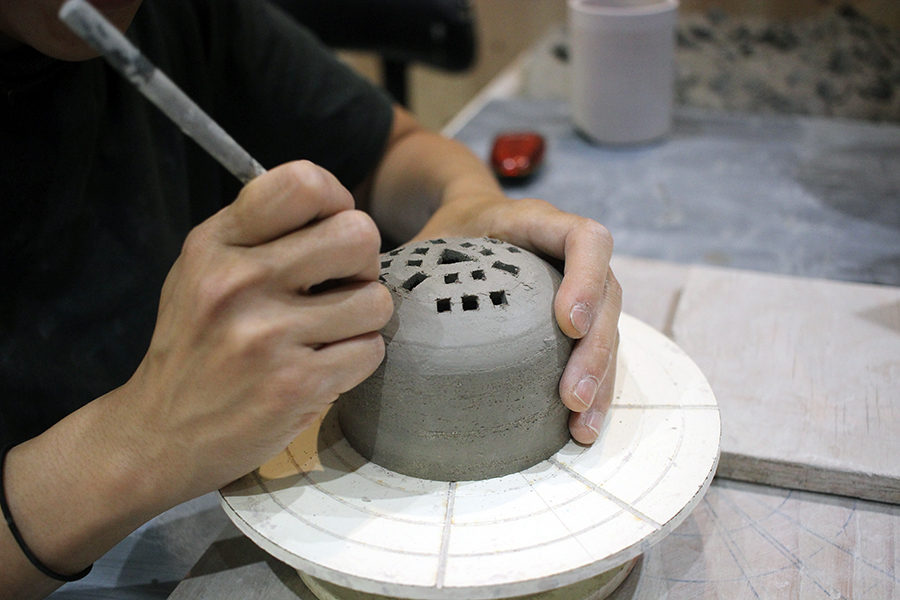 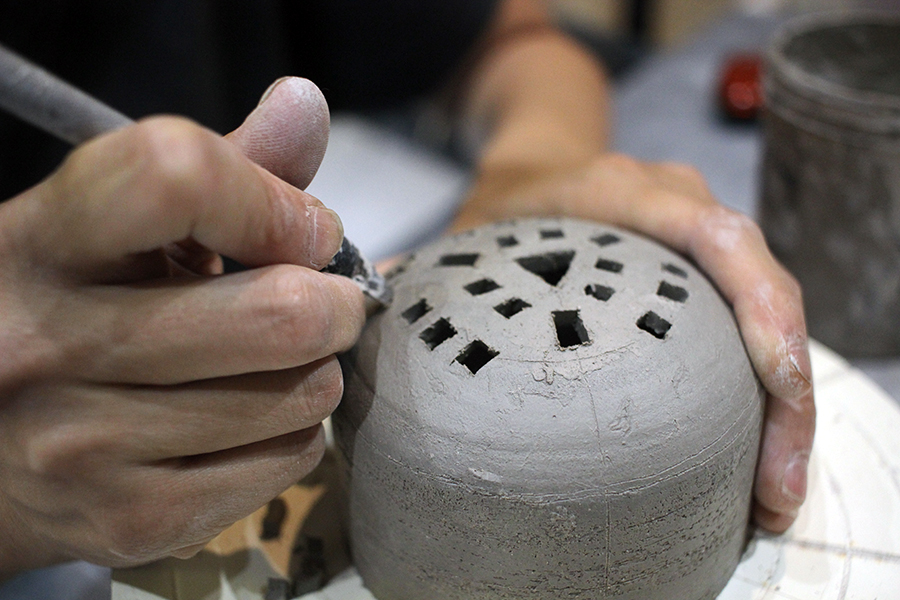 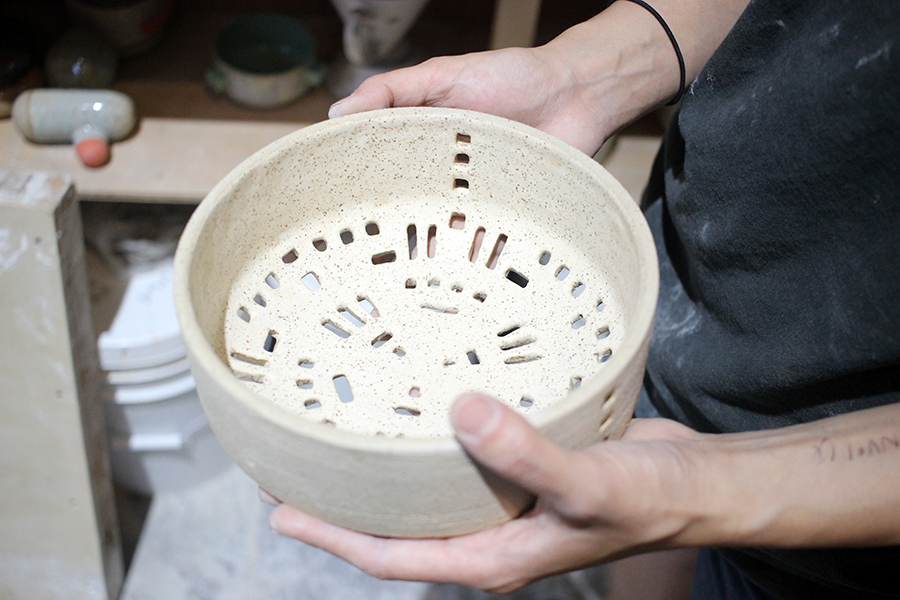