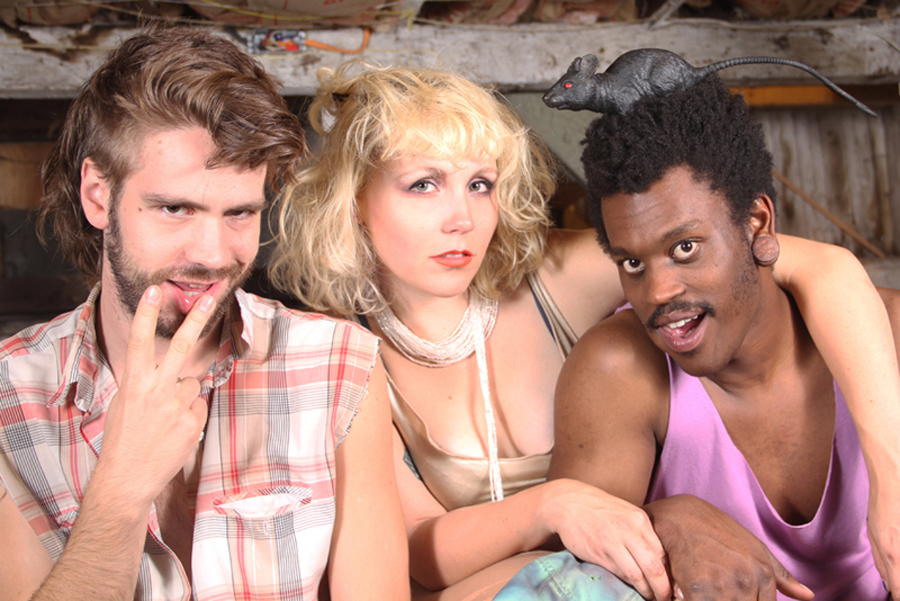 Guantanamo Baywatch has perfected new-age basement rock, a caliber last heard in 70’s rockabilly. From the depths of their jam-space basement, guitarist Jason Powell, bassist Chevelle Wiseman and drummer Chris Michael breed a punky surf rock sound both familiar and well set apart from early surf sounds of the 50’s. The Portland trio, and their DIY tenacity push the limits of rock with a smooth sailing, easy listening, alternative blend of long-heard beats and fresh noise. With future plans of incorporating a “less beachy” surf and soul sound, Guantanamo Baywatch sees little room – or reason – for slowing down.

You guys just end a pretty lengthy tour, how was traveling around to SXSW and Burgerama?

Chris: Yeah we did Burgerama. We did SXSW and had a great time there as usual. After SXSW, we kind of followed the Burger family from across Texas and through Arizona, all the way to Burgerama in Southern California. It was totally awesome.

Chevelle: Yeah it was a great time; kind of like hanging with your friends at summer camp.

We know both you and Shannon and the Clams are part of the Burger Records family, but how did the recent collaboration come about?

Chevelle: Well we’ve been friends with them for a long time and we’ve talked a few times about putting something out with them. Then, I’m not really sure, but it ended up being like “Hey, do you just want to do it?” It came together pretty well and since we released the split 7”on our new label, Suicide Squeeze Records we’ve totally sold out.

So with something like this, or even when doing a new song, what’s the recording process like for you guys? Is it rather hectic and spontaneous?

Chevelle: It’s always very different. We’ll go to our friend’s house and spend a couple nights there and try and quickly record some things. Depending on what’s going on we kind of always set it up last second. We only have a basement to record in so it’s always really stressful and messy; we’re no good at it at all.

You guys think this will be the case with the upcoming full-length you plan on recording this summer?

Chevelle: Oh no, that will be legit…well hopefully. It’s actually a real studio, Living Room Recording , and with Ed Rawls, whose done stuff with The Black Lips and The Coathangers.  They’re all going to be legit over there and we’ll probably be stupid.

Are you guys going in to the studio with songs already written?

Chevelle: Actually we were just writing songs right before you called.

Chris: Jason will usually come with an idea he’s had in his head and then he’ll jam them out to himself. We can always hear what he’s doing at all times. So some of the parts are also in our heads already, before we go into recording them with them.

Chevelle: Yeah, he’ll write a bunch of pieces of songs and then he’ll kind of record them together. Then we’ll all get together and see how it all actually works out and piece it back together once we find the sounds we like. Or we’ll have a bunch of pieces of songs and we aren’t sure where they can go, then we’ll somehow figure out how to mold them all together. It’s cool because we have an electronic drum set down in the basement so you can just plug it in and record demos and try different stuff out very quick, it’s awesome.

“Love Kin” has a little more country twangy to it than some of your other tunes, can we expect some more songs sounding like this on the full-length?

Chris: Some of the newer stuff that you will hear on the new album is definitely different. It’s more bass, and has more of that old, or rather, original rock ‘n’ roll sound that you would hear in early soul type music. It’s not quite as beachy. It’s definitely going be a party album though; it’s still going to be fun. We’re just trying to explore some different styles and see what we can do as band. Trust me, it’s not going to be totally off the wall.

Jason: I think the reason “Lovekin,” came out the way it did – kind of that southern style classic rock sound – is because we all listen to a lot of old country, so that was kind of like a weird gospel-style kind of song. A lot of the guitar parts I’ve been playing now, have’t been as much surf picking as usual.

What do guys think your guys’ progression has been like as a band since, not even just the first album you guys put out, but the second one even, Chest Crawl?

Chris: Well Chest Crawl was a compilation of old songs that we have been playing for a really long time. So that album was more of a solidified version of all those songs we had accumulated over the years. Some of those songs I wrote in college and in high school even. I think the new album is definitely more of whatever the three of us are kind of into. It’s more of a group effort. I think that everyone nowadays is doing surf rock. I mean there are countless bands making lo-fi surf rock, but you know, we also like a lot of other kinds of music that we would like to draw from to create our sound. Like oldies and soul and instrumental rock n roll.

So what are some influences for overall sound? Where do those surf riffs come from? And now wheres that country sound coming from?

Chris: We love love love Natural Child and Liquor Store. A lot of bands at SXSW that we hadn’t seen live were there, so we were like holy shit this is the coolest thing ever. When we made Chest Crawl we were a lot more influenced by other bands.

Chevelle: We didn’t know the amount of bands that we do now. We only knew mostly oldies. So now we have the old and the new sounds to draw from, which is exciting.

You guys play with a lot of punk and noisy garage rock type bands when you tour, who would be an artist or band that you would want to tour with outside the genre?

Chevelle: I mean, touring with a surf band would be so much fun. That is always something we wanted to do. We get the chance to play with bands that we love and play random festivals with bands we look up to and those shows are always a big deal. We have a lot of instrumental songs that we play live a lot, but to play for a crowd that is super stoked on that would be awesome. When we can play a surf cover and the people in the audience know what the song is, which rarely happens, is the best thing to be a part of for us. We are all huge surf music dorks deep down inside. Hanging out with those surf rock people that we grew up listening to would be amazing.

Chris: I’d want to go on tour with Los Straitjackets, that would be really cool.

Chevelle: We do all our own art. Chest Crawl was all of our own. I had the idea and then someone drew it out with some different suggestions. Jason had all these little sketches to show exactly how the person was going to be posed. Then I asked an old roommate of mine to get naked and it turned out tight.

What were some of the most exciting performances you saw at the festivals you played at this spring?

Chevelle: Curtis Harding, was so awesome to watch. Also Liquor Store was great, they are mind blowing.

Chris: We saw them three times that week during SXSW.

For music from Guantanamo Baywatch check out their bandcamp.