This is a preview of our upcoming issue 18 feature on Matthew King. You can preorder the issue here.

On a surprisingly cool and cloudy Wednesday in July, Matthew King and I sat down after work for a quick interview that ended up lasting well into the night as we talked shop and crushed something like eighteen beers.

The studio where he works is located in a classic red brick factory that was converted into studio spaces which are rapidly vanishing in the Boston area. It sits tucked behind a graveyard, an old boxing gym turned package store, and the greatest grocery store in the entire fucking world, Market Basket. Upon entering King’s studio, I see a group of paintings on the left wall. Some finished, some in progress, but all speaking in a language of vibrant strips of color and punctuated compositions. To the right, his tools. Brushes are lined up neatly, hanging from nails on the wall. Shelves and work tables skilfully made from two-by-fours and plywood are filled with acrylic pigments, old magazines and woodworking tools. It is a utilitarian space, punctuated by the radiant color relationships in King’s work. 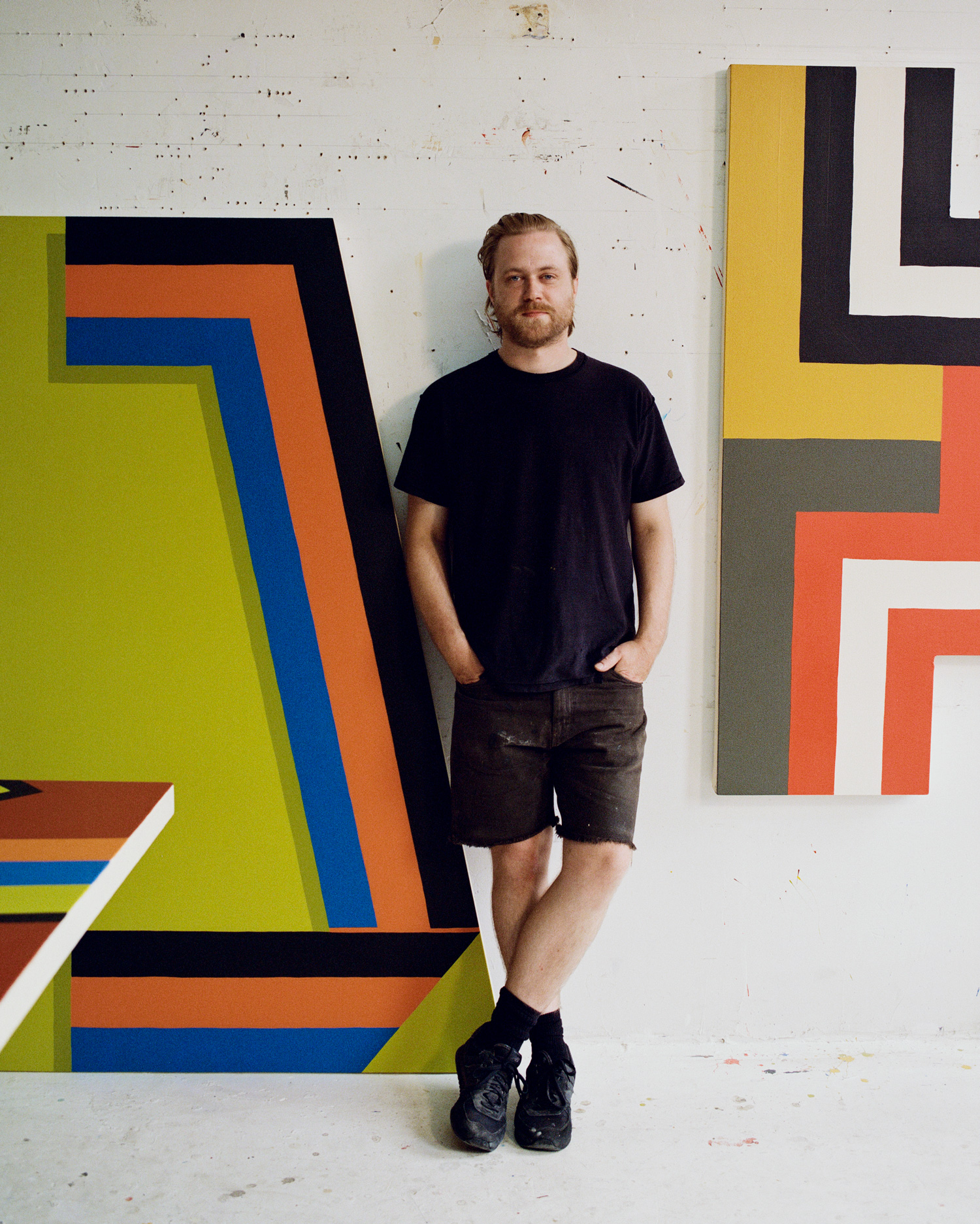 Where did you grow up? Do you have any early memories of making art?

I grew up in the suburbs outside of Boston. The house was across the street from a factory on the Charles River. I remember sitting in the kitchen window watching trucks go in and out of the loading docks. I made a lot of drawings of trucks early on.

Did you want to color and draw as a kid?

Yeah of course, but no more than other kids. My father was an artist. He had a studio in that same factory building for a bit. I have a vague memory of it. I was aware of painting as a language from an early age. I didn’t understand it, but the idea of abstraction was always a real thing. We spent a lot of time going to museums and that sort of thing, we still do. I learned a few drawing techniques early on, but I wasn’t any more skilled than my peers. If anything it was the opposite! I remember in high school I was making abstract paintings. Very, very bad paintings. But I knew that making them was a thing that you could do, and I found it interesting. I’m not really sure when I started to take it seriously though. I did get caught with some weed when I was younger and instead of being grounded my dad took me down to New York to the Jackson Pollock paintings at MOMA. I think that had a big impact. 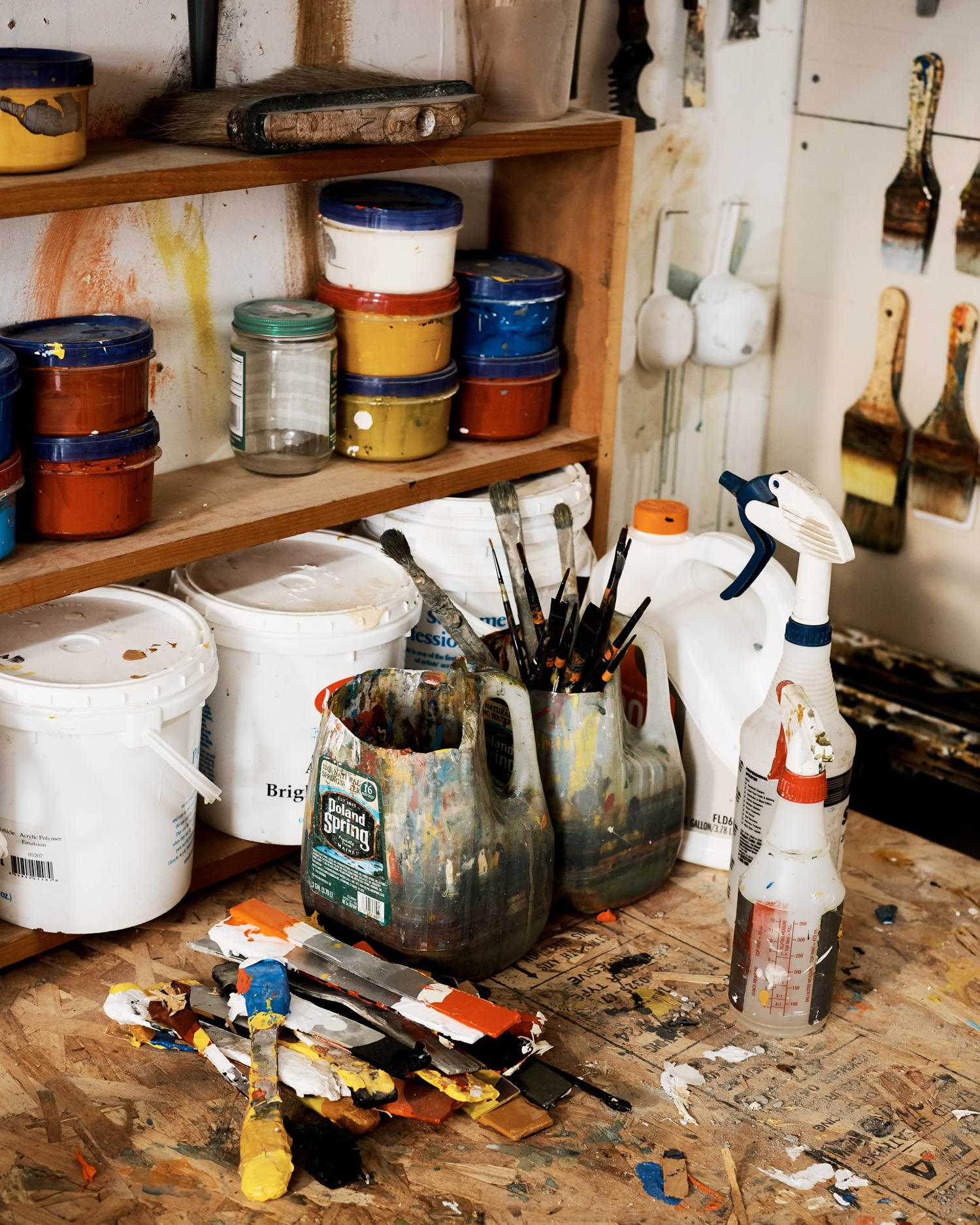 Can you speak to the materiality of canvas and how your relationship with that has developed over the past year or so?

I like the imperfections and process of making a painting on canvas. You’re abiding by a tradition of stretching a piece of fabric over a wooden frame. There are going to be imperfections in doing so, especially when dealing with a shaped canvas. It highlights reacting against that tradition and the starting point of an arbitrary rectangle. The surface isn’t perfect. There are flaws upon close inspection. I think those flaws are interesting. They make it human. It’s not manufactured, it’s made.

When you’re building this shape and stretching the canvas, you’re spending time with the object you’re crafting and thinking about the lines that you’re eventually going to make on it.

The paintings are planned out pretty extensively. First drawings, then a small maquette. Some change throughout the process, some don’t. Some have to be restretched. Some need major color adjustments, some need minor ones. It’s rare that there isn’t at least one or two adjustments from start to finish.

I’ve always enjoyed the building process. It’s a different mindset when there’s a clear task at hand. You can leave the heady art stuff to the side for a while and just get to work. Building the thing is laborious. It’s part of the painting process; the act of making a painting before you even have a brush in your hand. 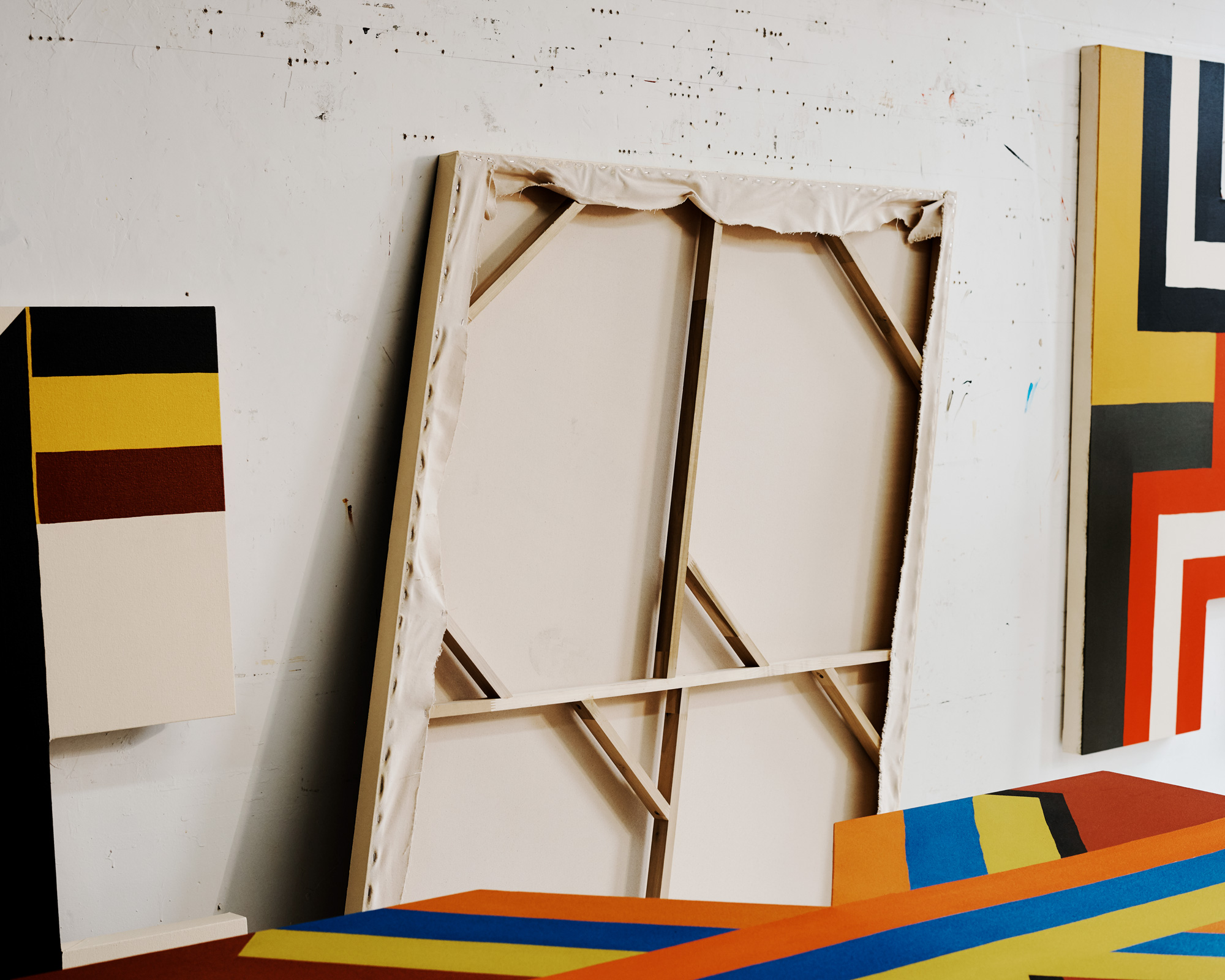 Tell me about the polygonal shapes of your paintings?

The new shapes are like cutouts or peepholes into a recurring space. They all function on the same scaled grid—so while the size of the paintings vary, the scale of any figure/ground relationship remains consistent. There’s a tension in that figure/ground relationship though when the figure exists in real space, and then recedes into an illusion of space. I’ve always been interested in making paintings as objects. It’s a different starting point and a particular framing device. It’s a way to control information—what’s there and what isn’t. Shaped paintings walk the line between illusion and reality, painting and object.

Are you speaking through the specific colors you include each piece?

I develop color systems that are employed in specific ways. As far as speaking through them, I don’t know. They certainly all have a point of reference. I tend to develop color systems that work through chromatic and hue relationships, very rarely changing value. It’s an approach taken from the likes of Matisse. The saturation is akin to the print quality of the sourced images in the smaller works—very rich chroma but always toned down. 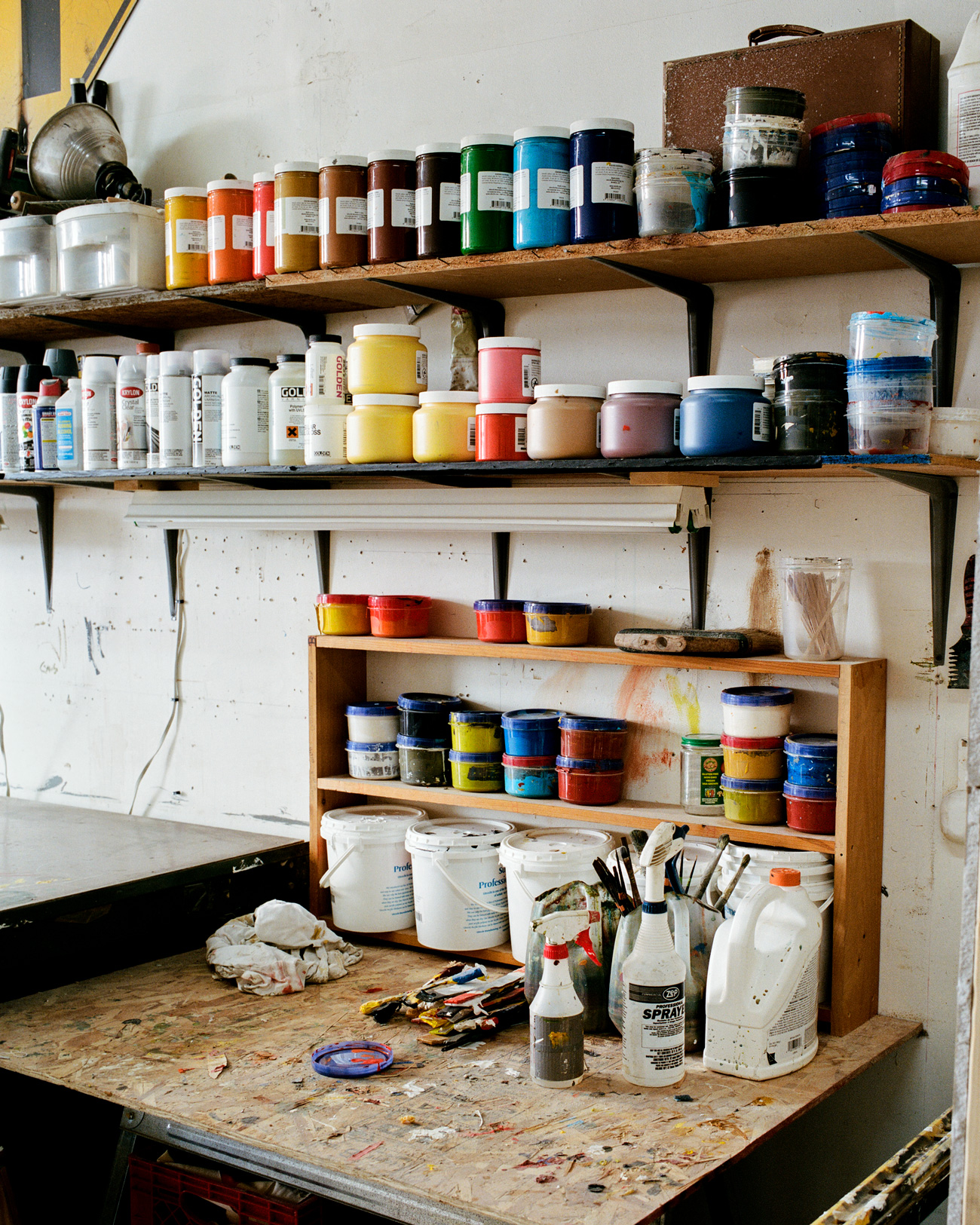 It’s incredibly difficult to secure an affordable studio space here in Boston. How did you make it work as a young artist?

It’s a tough town for that. When I got out of school I just immediately tried to find a studio space to keep working. It’s a slippery slope if you stop for even a minute. I rented a big industrial space out in East Boston by the airport and just lived in it. That was ten years ago now. I showered with a hose duct-taped to a slop sink and ate a lot of cold sandwiches. It was affordable and it was great. It wasn’t ideal, but I had to make the work somewhere and not making work wasn’t an option. I think you have to force it like that sometimes, just to make work. It’s got to be the most important thing.