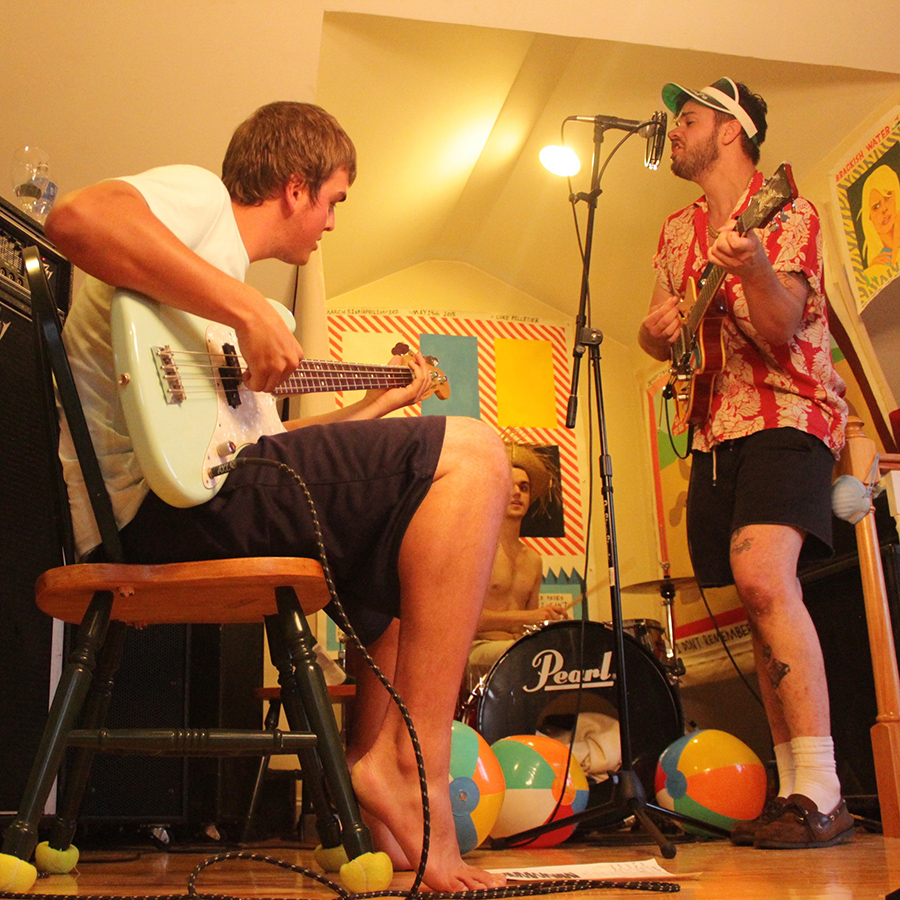 MUSIC VIDEO PREMIERE: Let’s Quit All Our Jobs—Let’s Move Out to LA

Whatchu know about Luke Pelletier? The painter, printmaker, musician and soon-to-be LA newbie can’t stop, won’t stop with a slew of exciting pursuits and a cross-country schlepp that will land him in the heart of all things creative.

He and his friends John and Matt (the See Ya Laters of Alligator Kid & The See Ya Laters) just released their debut album “Never Ganna Mellow Out,” a “goofy-surfy-indie-pop record about girls, friends, systems of being taken advantage of while simultaneously taking advantage of other people, and being a generally self-destructive person.” amadeus consensus: it’s awesome.

Their lead track, “Let’s Quit All Our Jobs—Let’s Move Out To LA,” is the twenty-something anthem, detailing Pelletier’s upcoming move and general what-the-fuck-am-I-doing-ness—we feel ya, dude.

And, so: we’re pleased to introduce you to Luke Pelletier—artist, funny guy and—oh, did we mention—featured artist in the upcoming and highly anticipated sixth print installment of amadeus magazine. Hell. Yeah.

All three? The son of my mom and dad? I’m not really sure yet. I’ve only been “Luke Pelletier” for 22 years. I’m still getting the hang of it.

This is the first record you’ve worked on collectively with other people in over four years—what was that process like? Are you glad to be back in the studio? What do you find has changed in those four+ years in terms of your creative, collaborative energy?

It’s SO much better. Haha John and Matt (the two guys that are in Alligator Kid And The See Ya Laters with me) are the best! They’re both super supportive and understanding. They’re always down to work on music, but if they show up for band practice and I’m too faded to play any real songs, they just get faded with me and we talk about whatever. I actually wrote most of the songs for this record on my own, but “Let’s Quit All Of Our Jobs – Let’s Move Out To LA” was written with them.

It’s for sure the most up-beat, fun song on the record. So basically, it’s just way more fun. As far as getting in the studio, I have a recording studio at my place. I work on new music a LITTLE bit everyday. In those four years, I developed the worst habits. When playing live, I never repeat a chorus. I almost never play in 4/4. It’s just bad, but I’ve been breaking a lot of those habits by practicing with Matt and John everyday.

Your new song, “Let’s Quit All Of Our Jobs – Let’s Move Out To LA,” is about your upcoming move to LA. What are you most looking forward to? How do you think this move will continue the evolution that is you and your work?

EVERYTHING! haha I feel wicked lucky that I have so many rad people in my corner right now. I’ve been working for a long time and I’ve definitely felt alone for a lot of it, but right now, everything feels really good. I’m working with some really rad galleries, magazines, clothing brands, skate companies, book stores, my band, and tons of other people that are being really understanding/supportive of everything I’m doing. I’m really excited to get out there and start working/hanging out with everyone in person. Oh yeah, and the beach.

Without giving away too much, what can we look forward to at your August solo show, ‘Tourist Seizin’ ?

There’s ganna be a lot of paintings for sure. Some interactive sculptures, photography, knives, beer and good times. The art is a lot more developed and mature than the things I’ve shown in previous solo shows, but above all else, it’s ganna be so FUN!

don’t forget to save the date: Saturday, August 8th 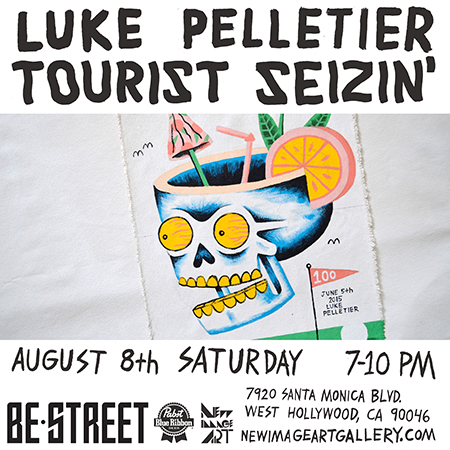 keep up with Luke and his happenings on Instagram: @lukepelletier