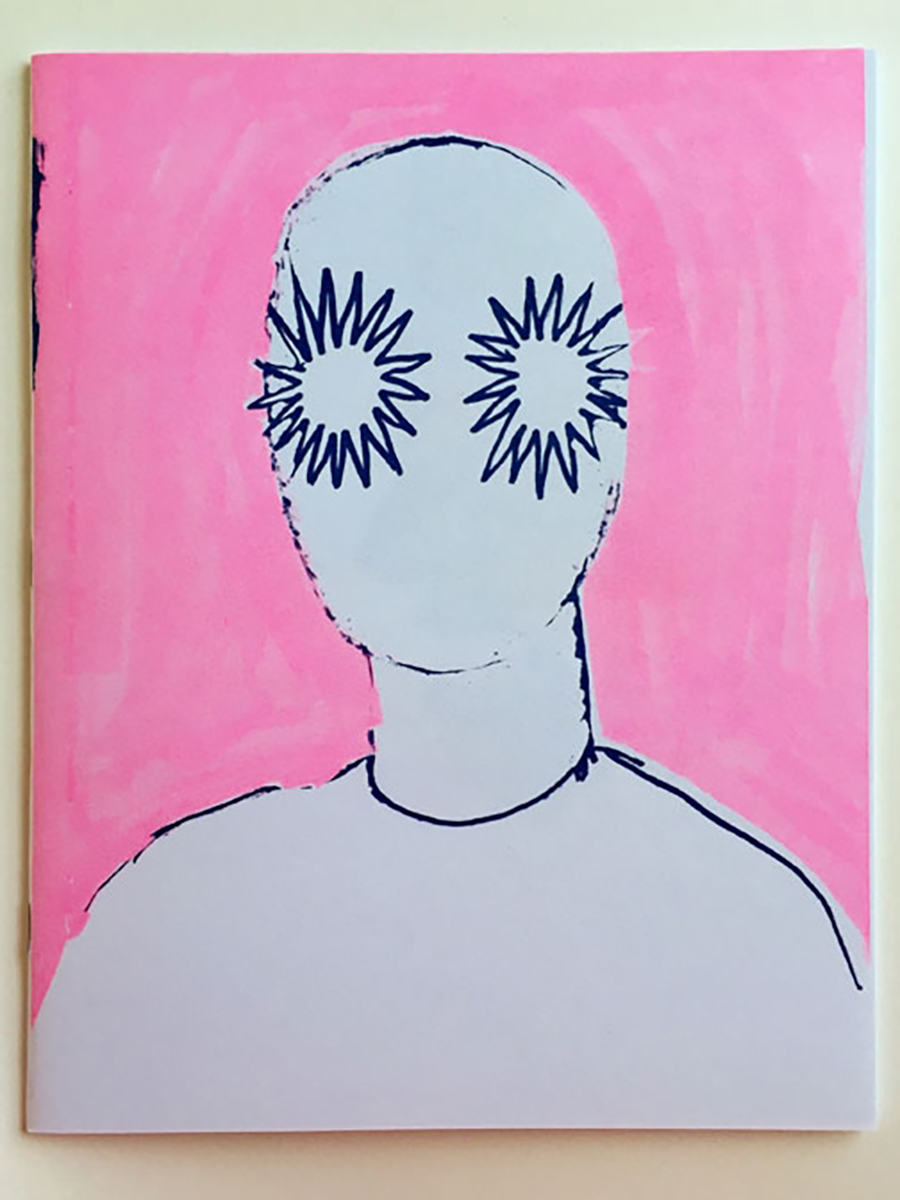 “If a tree falls in the woods and no one is there to hear it does it make a sound art collage?” Hopefully. But what constitutes art? Perception or reality? Permanence or each and every explorative, interpretive experience?

Artist Noah Lyon constitutes art. With the intuitive wherewithal to pull it off, Lyon frames our collective socio-political dysfunction, highlighting our woes with acute hope and humor evocative of change rather than digital fixes. In creating his informed, often informal beauty, Lyon has bridged the artistic gaps of orientation, environment and their inherent audiences with seamless convergence—from MoMA’s exhibition halls to the breast of your favorite hoodie, there’s Noah Lyon.

There’s also Lyon’s punk-induced alias, Retard Riot. As a radical product of the early nineties, reminiscent of young alternative media and its indie accoutrements, Retard Riot operates as Lyon’s countercultural think tank, rousing art admirers as they come to understand it in their own. As a zine, as a website, as a radio show, Retard Riot and its many forms assemble cultural critique with cultural relevancy, acting as a DIY headquarters for Lyon’s work and their ensuing impressions. And because art has a way of evolving before its time, commencing cultural upheaves and pushing public minds to think alternatively, Retard Riot (and Lyon himself) function independent of a particular form or method, instead reliant on Lyon’s relative stance in the world.

This week (February 12 through the 14th) Lyon is stationed in Los Angeles, at Printed Matter’s LA Art Book Fair at The Geffen Contemporary at MOCA. The Lyon-Riot table will have buttons, T-shirts, a new DFW zine collaboration with Japanese artist Ken Kagami and a risograph edition book called “Everything Is Normal,” all of which we suggest you scoop up. Before his JFK-LAX jaunt, Lyon indulged us with an interview, chatting about art, culture and the fuzzy junction they share in 2016.

First off, who is Noah Lyon?

This is like a Nardwuar interview… “Who are you?” I was hoping you could introduce me with some flattering words. Roberta Smith just left a comment on one of my pieces on instagram saying “Greatest work of art ever.” I’m not even joking. So that should probably be in my bio …critically acclaimed as making the “greatest work of art ever.” I’m not going to say what it was but I will say I’ll be at Printed Matter’s LA Art Book Fair, from February 11 – 14, 2016, at The Geffen Contemporary at MOCA, if I’m not at my table I’m outside enjoying the weather. New York just got hit with a blizzard. I think blizzards are my favorite type of extreme weather. I like walking in the middle of the street when the city shuts down.

Tell us about Retard Riot. How did it come to form? And what role does it play in the expansion and creation of your visual work?

Retard Riot has mutated from street punk gang to tape label to radio show to zine to website and various things in between. It still exists as a few of those things. In the beginning Retard Riot had a lot of influence from CRASS and Wu-Tang Clan—most people recognize those names as musical groups but what they have in common is a sort of D.I.Y. ethic where there are no boundaries whatsoever. Not in any form or medium but a philosophical approach to the fact that anything is possible if you put your mind to it. Failure being the foremost possibility of course, the fool who persists in folly becomes wise.

What is your mental work “zone” like? What does it take to get you there (music, frustration, discussion, etc.), and how long do you keep in your “zone”?

I’m always in the zone. What do they say? It’s a fine line between genius and insanity. Walking that line is my zone. I gotta have good food, good music. I wear a watch to keep track of time.

Meditation is good. Just plain old healthy living keeps me working in step with the rest of the world and not just spinning off into my own universe.

What is your relationship to/with your work? Is it representative of you, or more so our culture as a whole? How have both you and your work evolved over time?

I love my work. If you’re an artist and you don’t love what you’re doing you should quit immediately.

I have many different bodies of work that serve different purposes. That allows me total artistic freedom. If the evolution of one body of work slows down I can pick up where on I left off on another.

Different mediums allow for different explorations and creations. I might deconstruct a cultural phenomenon, to find what it’s really made of, or to expose something I think is sinister, or I might make something for purely aesthetic reasons.

If it has my name on it represents me, in theory. We live in a “me culture.” A heavily branded one. And I’m not Noah Lyon, I just play him on TV, or the internet, or the art world or whatever situation I’m in. Noah Lyon is a brand name, which I uphold to the highest standard. Branding is the dominant culture. I make fun of that a lot, and I’m involved in subcultures where that sort of thing is frowned upon. So I can see where people might get confused.

An artist I respect once referred to me as a cultural ambassador. I liked that. It sounds very official. But it also means picking through a ton of trash to find and present truly meaningful things as shining examples of our culture. And sometimes I’m just like “Hey look at this garbage!”.

All of your work is interactive, whether via obvious stimulation or via communicating and evoking thought, criticism and efforts of change. Do you think your work is reliant on or interpretive of that interaction, or the other way around?

I like that interpretation. I think it goes both ways. If a tree falls in the woods and no one is there to hear it does it make a sound art collage? Seriously though, I think you just described good art. If art doesn’t evoke anything then its bad art, and unfortunately there are lot of things out there being passed off as art that are evocative of nothing.

You devote yourself to the creation of both permanent and non-permanent art. What are your thoughts on the non-permanence of certain art (and, similarly, the permanence of some), and what do you think that suggests of our culture?

I think the entire concept of permanence is currently in question. Let’s skip the part about the earth washing the human race from its surface and jump to the more agreeable topic of everyone spending the majority of their time looking at digital imagery on electronic screens. That’s made things like zines or buttons or t-shirts, which were previously thought of as ephemeral art objects, much more concrete.

Just by the fact that they are objects and not blips or pixels on screen. So now you can go to a museum and see paintings and zines and buttons all in the same archival permanent setting. Even digital work is being preserved. As a cultural phenomenon, I think it’s mostly just humans clinging to what we can while we’re enslaving ourselves to machines and lifestyles that will ultimately destroy our minds and natural habitat. The good news is that art has permanence in its power to transcend, to educate, to inspire, to change these grim circumstances in which we find ourselves.

I like cave art, like that Herzog film with the horses. Someone drew on a wall with stick and people are loving it forty-thousand years later. I’m a big fan of Northern European Renaissance art. Just coming out of the dark ages. Hooray! We beat the bubonic plague! I feel like that’s what my work is up against, the moronic plague. When humans are wiped out by obesity and greed, maybe a new species will look at one of my cave paintings a million years from now and be moved by it.

Walk us through a typical day with Noah Lyon. Working, non-working, whatever.

Everyday is a new adventure. There are no typical days. If you want to follow my work you can join the Noah Lyon Fan Club at retardriot.com for updates. @noahlyon on Instagram. 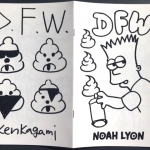 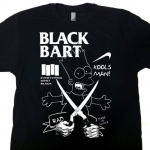 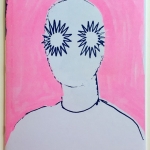 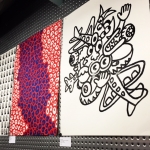 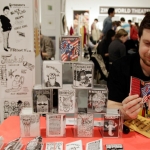 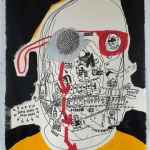 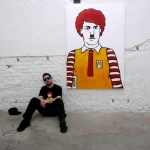 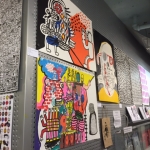 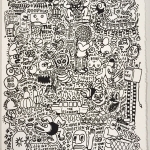