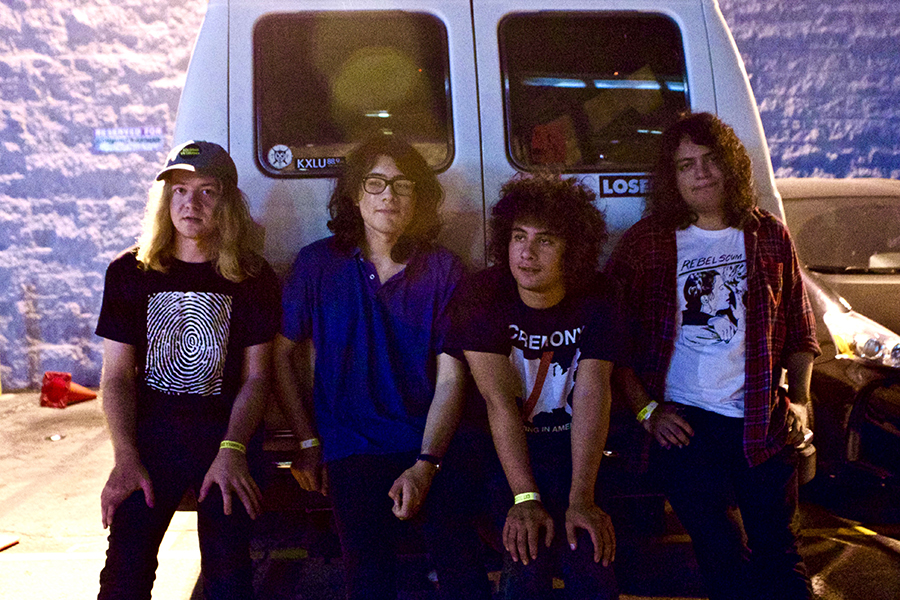 Noyes: A Loud Band From Lawndale

The Smell – an iconic all ages, hole-in-the-wall venue located in an alley somewhere at the center of Downtown Los Angeles – has become a breeding ground and creative haven for a range of DIY artists, many of them pundits of surf rock, punk, and that dirty, fuzzy, grunge rock that fits the LA venue’s seedy aesthetic so well. But the seminal venue’s days are numbered, due to the landlord selling, and big developers money-mongering plans to build concrete parking lots that make beautiful downtown, uglier. Maybe you went to your first concert, or joined your first (and last) sweaty mosh pit there, but for those of us that claim devotion to the music space, The Smell is all the community it propagates; a supportive artist-run vibe that spawns the city’s constant flow of booming musicians.

Amongst the sea of grunge-punk bands that have played on The Smell’s stage is Noyes: a group of four very loud, even grungier looking guys that come from the LA suburb of Lawndale. Noyes, pronounced like ”noise,” started around four years ago and is made up of friends Kermit (singer/guitar), Daniel (bass), Ian (drums), and Byron (guitar).

I talked with the guys as they waited around to play The Smell for their third time. Within the first few minutes of sitting down with them, you begin to realize that they’re more timid than their music, stage presence, or name might suggest. It is clear though that there’s an undoubted passion for the music they’re playing, and when they begin to rattle off names of bands they admire and things they hate, it becomes even more apparent of their love for all things music.

I got around to asking them about their influences, their scuzzy grunge sound, and their feelings about the large probability of The Smell getting torn down in the future to make room for more parking. Yes, you read it right. Parking.

How did you guys all come together to form Noyes?

Daniel: We all went to the same middle school. It was probably around… 2006.

Ian: The way I remember it is My Chemical Romance.

Kermit: Don’t listen to these guys. Ok, so Ian and I started playing together when we were really young like 15 or 16.

Kermit: We started playing together in another band with other friends and they all left. We played as a two-piece, then Daniel joined in early 2012. Byron has been going with us to every show since 3 years ago on the tour and he joined the band in early May.

It seems like a lot of other bands your age have leaned towards the same genre…kind of all falling under that lo-fi “Burger Records” sound. But you guys are very angry… boasting a “fuzz punk” and grunge rock sound. Was there a reason you decided to go that direction?

Kermit: We didn’t really decide to, that’s just the music we were most interested in. We’ve never been into Burger. We grew up more in the suburbs so we didn’t really experience anything here in greater LA.

Has growing up in Lawndale and the surrounding LA area influenced your style of music at all?

Kermit: A bit. The only bands that were in Lawndale were like post-hardcore bands.

Ian: We kind of wanted to rebel against that post-hardcore stuff. It was just a bunch of macho stuff… like people getting into the pit just to hit each other.

So did you guys listen to any bands that heavily influenced your music taste growing up and your current musical direction?

Kermit: We were originally going to play Joy Division covers.

What’s your songwriting process like? What comes first, music or lyrics?

Kermit: Daniel and I both write songs. So there’s two different songwriters. But it’s usually written in parts so the arrangement comes together.

So it depends on the song for the music and lyrics and which comes first?

Kermit: Yeah, lyrics sometimes come later. Sometimes I’ll look back at stuff I write to for other songs.

How did the entire process of working on your latest EP, Relapse, differ from your earlier one, Noyes, released in 2015?

Kermit: Well for Noyes, we won this drawing to record with Converse. It was an 8-hour session and only one day, so we went in at 11am and left pretty early. We were doing the last session because our engineer was flying to New York that day. We recorded it, mixed it, and then left.

Daniel: It was all tracked live. Both EPs were tracked live except for the newest single that we just put out, which was overdubbed.

Kermit: Relapse was done from 9pm to 6am on night.

Ian: It was definitely midnight! I remember having to get off work to drive straight to the studio.

What can people expect when they come to a Noyes show?

Ian: It’s either a good show or bad.

Kermit: Yeah, we either play really well or really bad.

What makes it a bad show?

Daniel: Just not feeling it.

Do you guys have a favorite venue to play at?

Ian: Not here. The Black Lodge in Seattle and The Know in Portland were both really fucking awesome venues. In LA, we’re kind of spoiled with spaces like that so there’s not really one to have an attachment to. You could go to The Echo, The Smell, Los Globos. There’s a show basically going on anywhere. I mean I’m sure it’s the same in Portland.

I know you guys just recently toured. Was there a spot that you were like “I want to come back here again.”

Did you see a difference in the way the crowd responded to you?

Kermit: Portland was just really packed. There was a bigger local band playing.

Kermit: We played in Denver too at a bar and the first band was playing country music and we were like “Oh fuck, how did we end up here?” We thought for sure we were going to get beaten up and thrown out onto the street. It went alright though. People really didn’t know why the country band was there. The Melvins used to play there all the time.

FYF in Los Angeles is coming up in a little bit… who would be on YOUR dream festival lineup? Alive or dead.

Kermit: Of course. I’d really like to see the Stooges, but when they were young, not now.

Ian: How sick would it be if Dead Moon played? Or Built to Spill? Or the Melvins?

Kermit: The Witches too! The Ty Segall band. Not the Muggers.

Ian: If you compare the 2010 lineup to the 2016 lineup… back then you had bands like Best Coast and Panda Bear fucking playing!

Yeah, I could tell you wrote it.

Kermit: What are we angry about right now? The fact that a Donald Trump presidency is possible.

Ian: It’s no longer the lesser of two evils. It’s like both are shit.

Kermit: The Smell might be knocked down for fucking parking lots. As if there aren’t enough already.

What’re your thoughts on the Smell, this iconic, DIY-supporting venue in Los Angeles, getting torn down?

Kermit: Ian and I started going to the Smell when were 15 or 16. Not sure what year it was, but it was an anniversary show. Best Coast was headlining and it was right after they got signed to Capitol. They kicked out the drummer and had a studio drummer playing with them. It was some bald dude. He was wearing ear monitors…

Ian: Probably the best sounding drums I’ve ever heard at the Smell.

Kermit: I went to my first mosh pit at the Smell. Now that I’m getting older I can go to shows that are 21+, but back when I couldn’t, The Smell was one of the only places young people could go to and see live music.

What can we expect from you guys this coming year? A new album or tour?

Kermit: We don’t know. I really want to have an album out by the beginning of next year. We’re always writing new stuff.