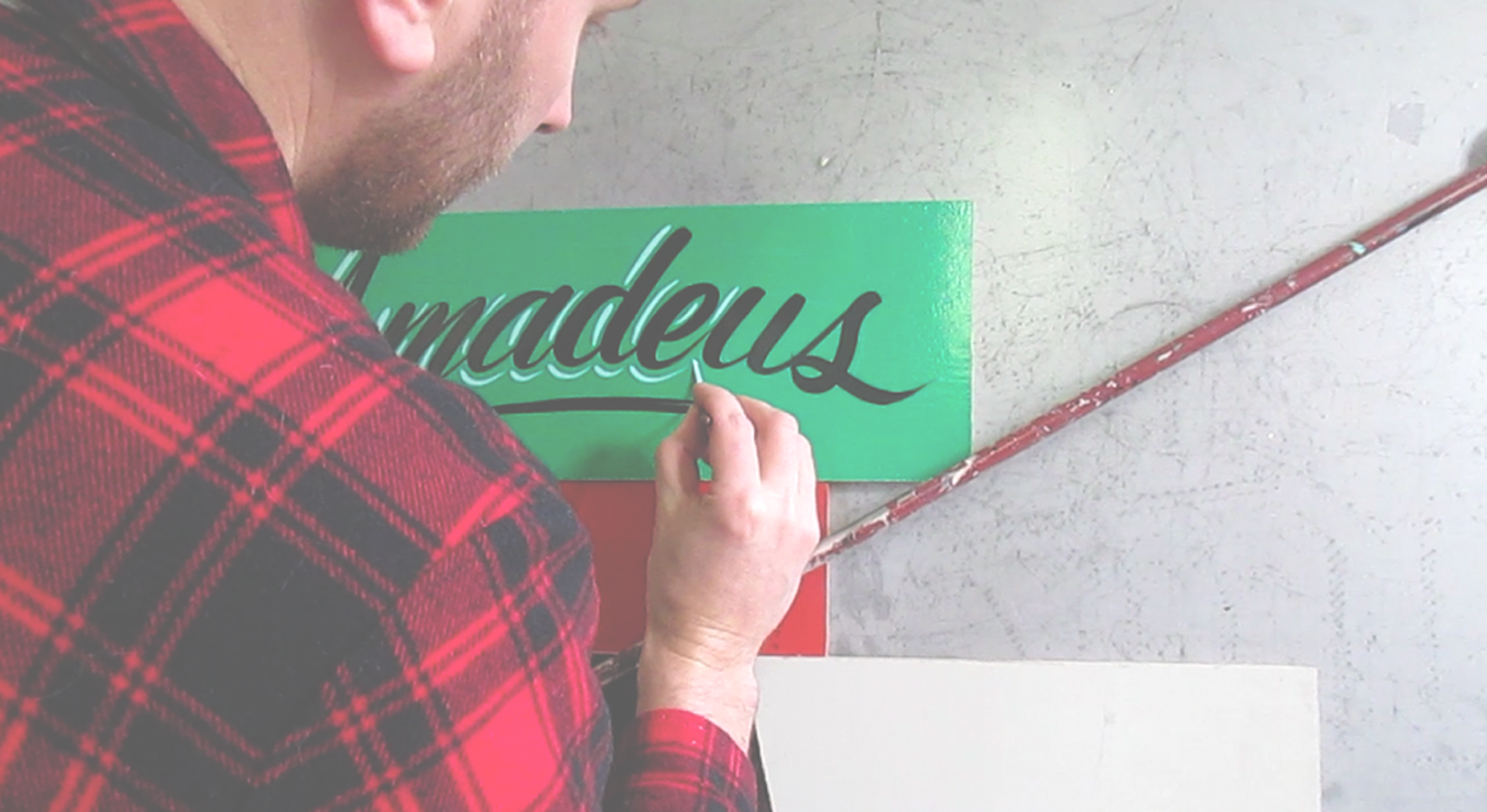 When was the last time you walked down the street and saw a sign that actually caught your attention because it was aesthetically pleasing? The computer-designed, diecut vinyl lettering that litters a majority of business’ signs has undoubtedly created a creeping sameness in our cityscapes. Now, with the proliferation of inkjet printers and the effortlessness of having a sign computer-generated, our neighborhoods and cities have become a cesspool of almost identical looking signs that hang overhead.

However, sign painting is well on its way to recovering from the threat of becoming obsolete. The traditional craft is now morphing into a form of the graphic arts as a new niche market, and ambitious sign painters like those at Best Dressed Signs in Boston, are at the helm of making sign painting appealing to people that appreciate art, traditional craftsmanship, and history.

With two of the most talented sign painters around on the Best Dressed Signs team, Josh Luke and Kenji Nakayama, the company, which also includes co-owner Meredith Kasabian, or rather, the brains behind the operation, is part of the reason that sign painting is beginning to undergo a renaissance. Their efforts to reinvigorate the demand for hand-painted signs has sparked a renewed interest in not only sign painting, but DIY-everything, that is blooming amongst those that still enjoy and appreciate things that are hand-crafted and authentic.

Best Dressed Signs has become a model for active and novice sign painters around the world and plans to continue to create signs and art that excite conversation about society’s increasing reliance on technology and the impact it has on our daily lives. No one can deny the character of a well executed hand-painted sign. Evidence of being created by the human hand is clearly visible, and with our growing weariness of mass-produced goods, more desirable as well.

How long have you been painting signs?

Who or what were your inspirations/mentors in learning the craft?

As a kid I was into the graffiti/skateboarding subculture and I would always draw letters and compare them with my friends’ drawings. It was similar to skateboarding in that you’d try new tricks and show them off to your buddies. When I got the opportunity to apprentice at New Bohemia Signs in San Francisco it seemed like a natural progression. I was able to take my passion for lettering and elevate it to a professional level. Damon Styer, owner of New Bohemia, was my mentor and I learned most of what I know from him. These days I’m continually inspired by my peers in the field, including Kenji Nakayama, Carl Frisso Angell, Caitlyn Galloway, Ken Davis, James Cooper, Colt Bowden, Derek McDonald, Chris Dobell, Lynes and Co, and Austin, Texas sign legend Gary Martin, just to name a few.

What brought you to Boston from San Francisco?

My wife Meredith is originally from Boston and we moved here for grad school and also to be closer to her family. I was excited about moving to Boston because of its historical significance and its rich architectural and sign making traditions. I’m honored to be able to contribute to the aesthetics of this city.

On the technical side, what is the hardest part about lettering with a brush?

In the age of digital EVERYTHING, why is sign painting still relevant?

Although it’s always the goal of a sign painter to make each stroke as perfect as possible, flaws are unavoidable because it’s a human hand that’s making it. Even a hint of a brush stroke or a slight waver in a line shows that humanity is inherent in hand made signs and that’s important to remember in this digital age.

Walk us through one of your signs, from start to finish. How do you come up with idea and how do you execute it?

It usually starts off with an email or phone call to Meredith and she discusses with the client what they’re looking for. If the client wants me to design their sign, Meredith will ask them to provide us with as much information as possible, including what kind of lettering they like or even just a general aesthetic to give me an idea of what direction to take the design in. Once we have as much info as possible I’ll sketch a design and present it to them for approval.

Once it’s approved we get started on making a pattern. To do this we project the sketch to the proper size and trace it on to paper. Then we use a machine called an Electro Pounce to perforate the lines with an electric current. We then prep the board or surface that the sign will be painted on. This usually entails cutting it to size, sanding and sealing the edges, and rolling out the background color. Then we place the pattern on the board and pounce chalk through the perforated lines to create an outline, which will serve as a guide for the design. It’s only then that the painting begins.

Why are people attracted to hand-painted signs? Why this resurgence in the past few years?

I think people are starting to notice the difference in quality between something that’s handmade and something that’s machine made. Hand painted signs add a warmth or humanity to a neighborhood and break up the homogeny that digitally printed signs tend to convey. Sign painting is such a unique and visually striking form of public art that it was bound to spark renewed interest, especially as lettering in general has come to the forefront of art and design recently. The documentary and accompanying book Sign Painters by Faythe Levine and Sam Macon also helped fuel this fire and get the word about sign painting out to a larger audience.

Why did you start the Pre-Vinylite Society?

It’s evolved so much over the past few years, what do you attribute that to? How has it evolved?

The Pre-Vinylite Society started as a Facebook page where sign enthusiasts could post their work or inspirations and get advice. Since then it has expanded to include an instructional sign painting zine by Colt Bowden called How to Paint Signs and Influence People and a collaborative blog for more literary inclined Pre-Vinylites, curated and edited by Meredith Kasabian. We’ve done three art shows so far: The Pre-Vinylite Society Sign Art show at Orchard Skateshop in Boston in November 2011, The #ICYCAPS show at the Cannery in San Jose and at Rapt Studios in Culver City, CA in December 2013 and March 2014, and Its Virtue is Immense: A Pre-Vinylite Society Tribute to Script Lettering at Lot F Gallery in Boston in March/April 2014. We also have more art shows planned for the upcoming months.

Typeface that best describes you.

You work at many different scales – do you have a personal preference?

It depends. Sometimes it’s fun to get out there and do large scale projects like the There’s Never an Off Season or the Kingsboro Park mural (plus the exposure is nice!) but I do enjoy being cozy in my studio working in inches rather than feet (plus there’s beer in the fridge). 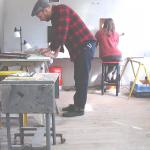 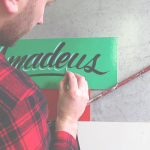 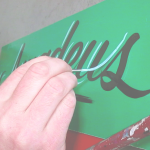 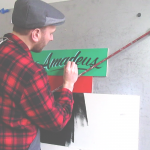 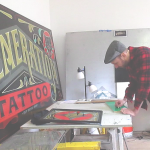 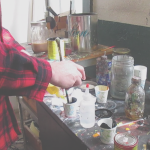 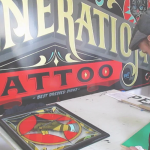 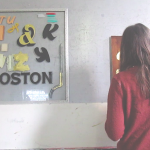 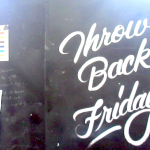 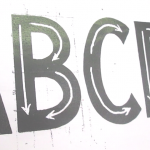 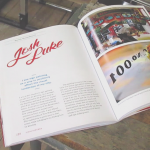