There’s something hauntingly familiar in the narratives that play out in Los Angeles-based artist Canyon Castator’s bold, large-scale oil paintings. Scenes of outright debauchery heighten and elicit the loss of a personal moral code, which seems to largely permeate today’s social reality. From the innumerable and grotesque accounts of harassment that have been brought to the forefront in the last year, and the continued acceptance and normalization of violence, to how ingrained and reinforced party-culture has become, looking deep into the vivid scenes of Castator’s paintings is almost like looking in the mirror at our currently fucked up society—ambivalent, cartoon-like characters indulging in a range of salacious behaviors. Castator is not only scrupulous in executing the finite patterns and melange of textures that embellish his characters on the canvas, but also in humorously calling out the groups and people that blindly embolden the herd-like behavior that’s plagued our society for years.

Tell me about your show at Postmaster’s Gallery in New York.

The show is called Pissing Match, there are nine oil paintings and one large drawing in the show. The paintings are my exploration of group mentality or herd behavior, the loss of a personal moral code, and the decentralization of decision-making. 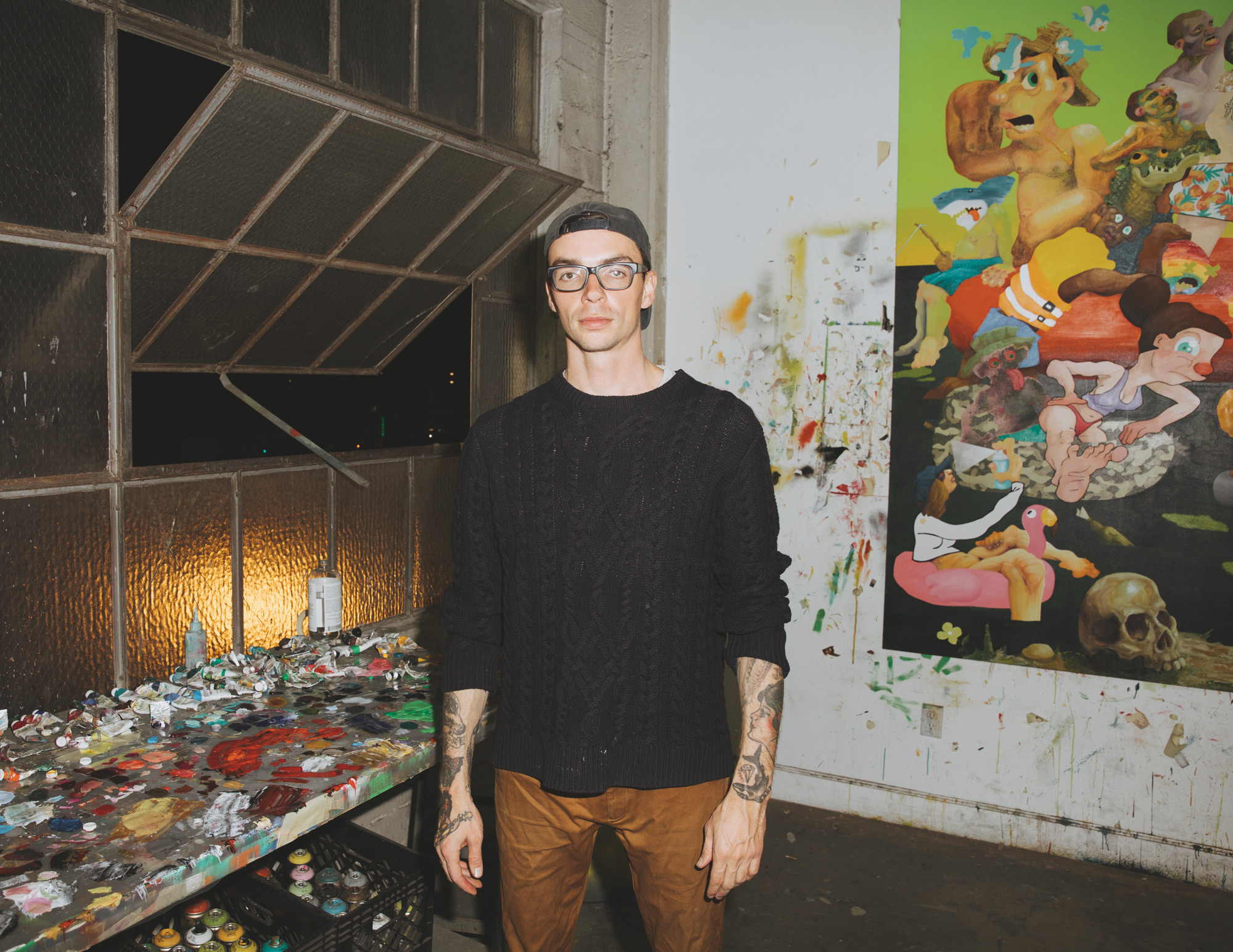 For this series of work, what has changed and what has stayed the same?

In preparing for this exhibition, I decided that I am a painter of paintings, not a painter of a painting series. It’s an open-ended personal investigation that for me won’t end at the opening. In terms of my approach to the work, I think I’ve just been allowing myself to have more fun.

Tell me about the name Pissing Match.

A pissing match is a meaningless contest to establish a false sense of superiority. While this behavior is typically associated with youth, it’s an ideology that unfortunately informs our politics, business practices, etc. The victor of a pissing match is only validated by the audience and outside of that audience, it’s insignificant. These are paintings of the groups that embolden these false pissing champions.

What kinds of stresses come with your first solo show?

I spent so much time stressing out about how little time I had to prepare. It’s funny because when I was a kid, I was always told not to wait until the last minute to work on a school project. I really didn’t procrastinate this time, but I was still working up until the day the paintings shipped. So firstly, I think all the adults in my life have cursed me and secondly, you will never know the stress of handing over nine, giant, wet paintings to some random delivery person you’ve said all of two words to, to ship across the country. 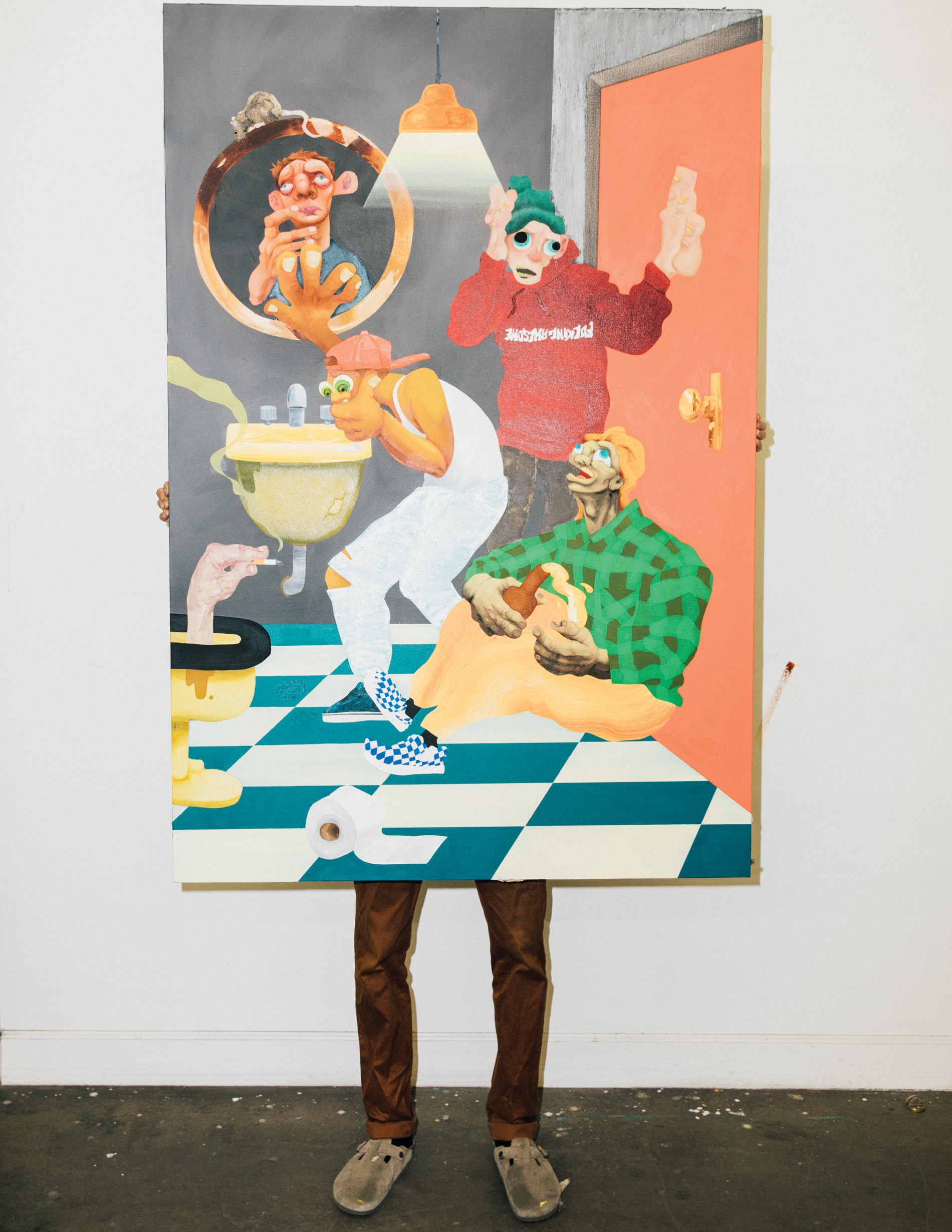 Because this show is in New York, do you feel a different degree of stress? Is there more pressure?

The great thing about this show opening in New York is that undoubtedly, certain people will hate it, and I will hear about it, and that’s amazing. New Yorkers are critical, more so than the market, and much more so than LA. That criticality is necessary, for me, for painting, for everyone.

What about this series are you most proud of?

The part where I’m done and can go surfing again. “And spend time with my girlfriend again!” – Zarina Nares yells from the other room.

All photos taken by Adam Amengual. 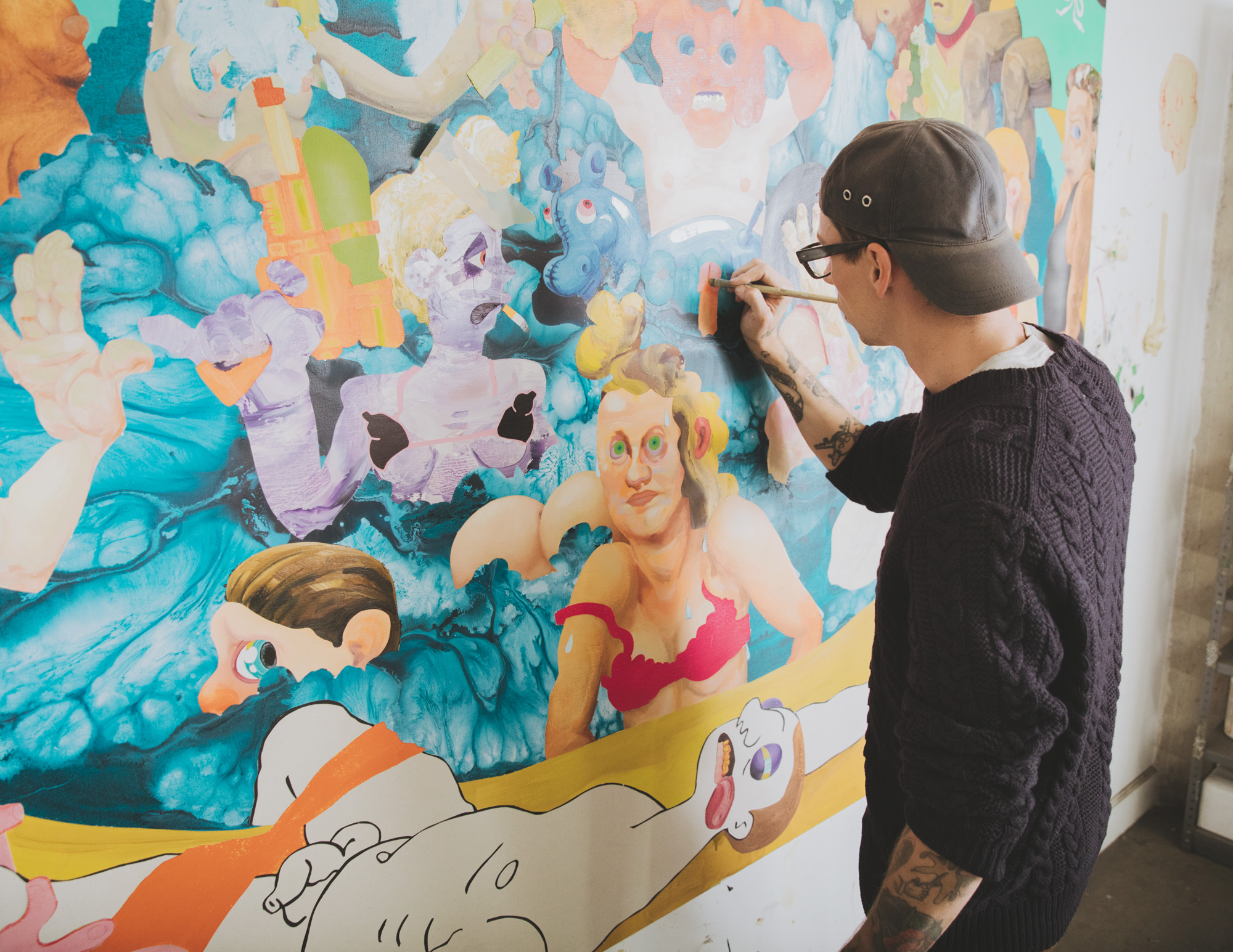 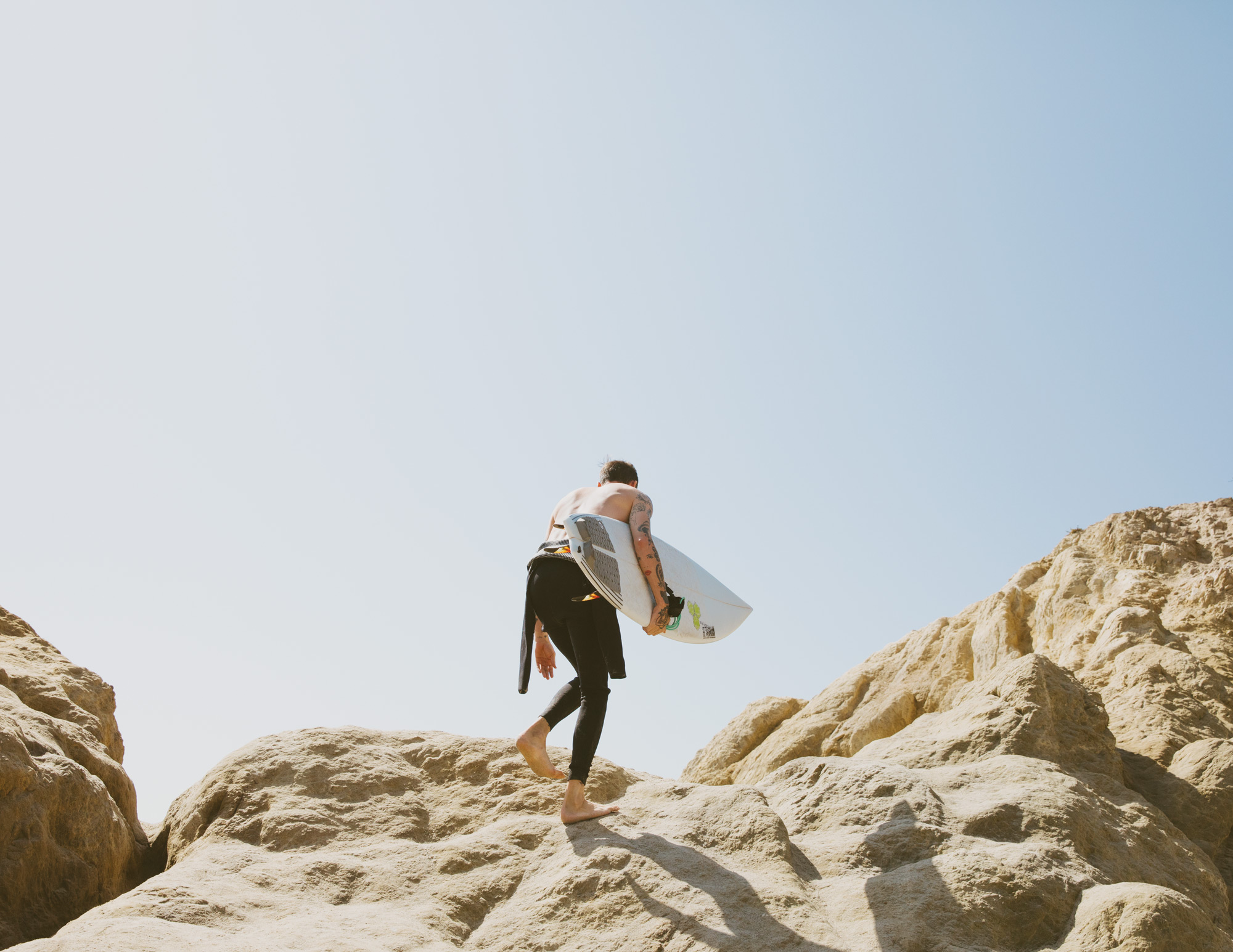 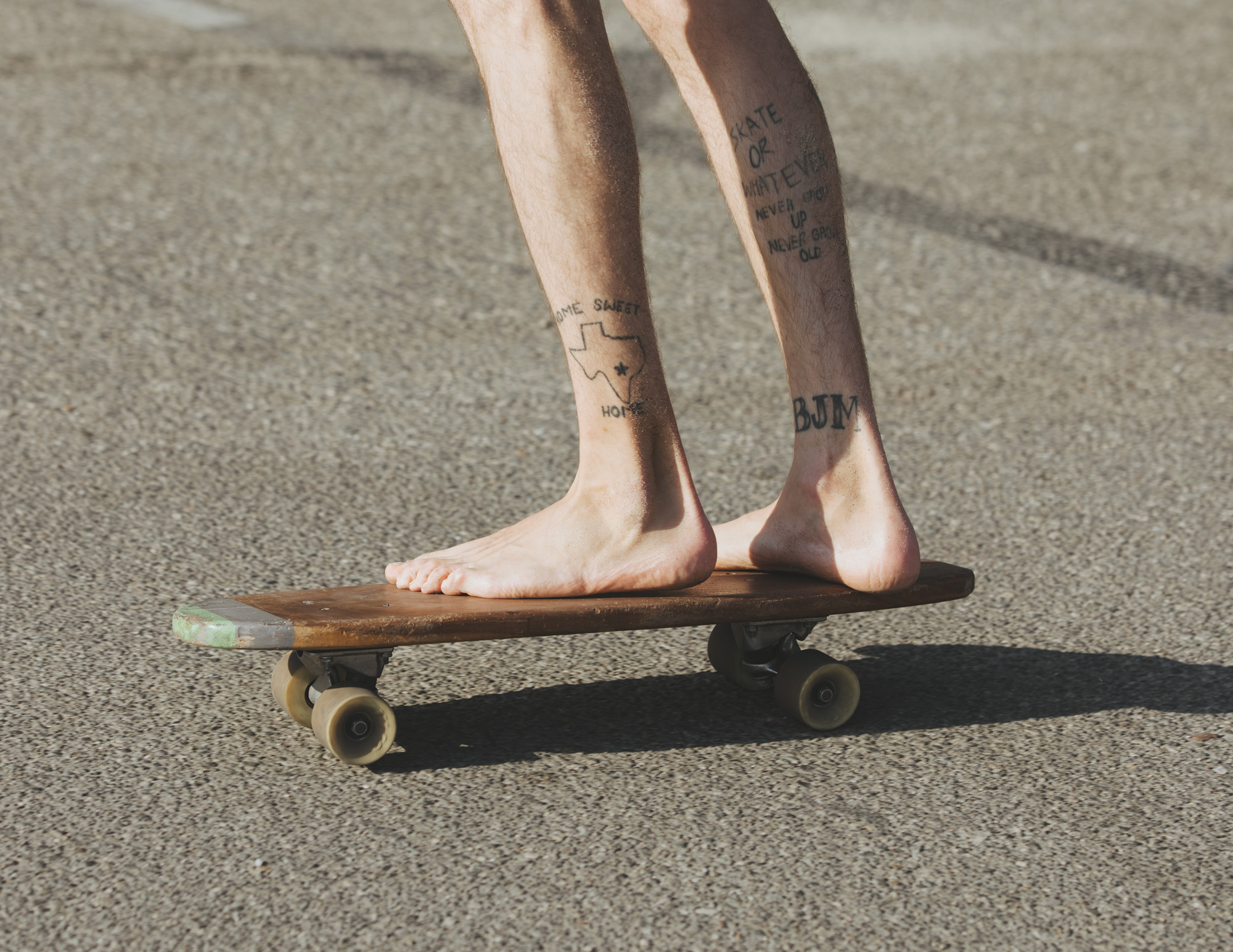 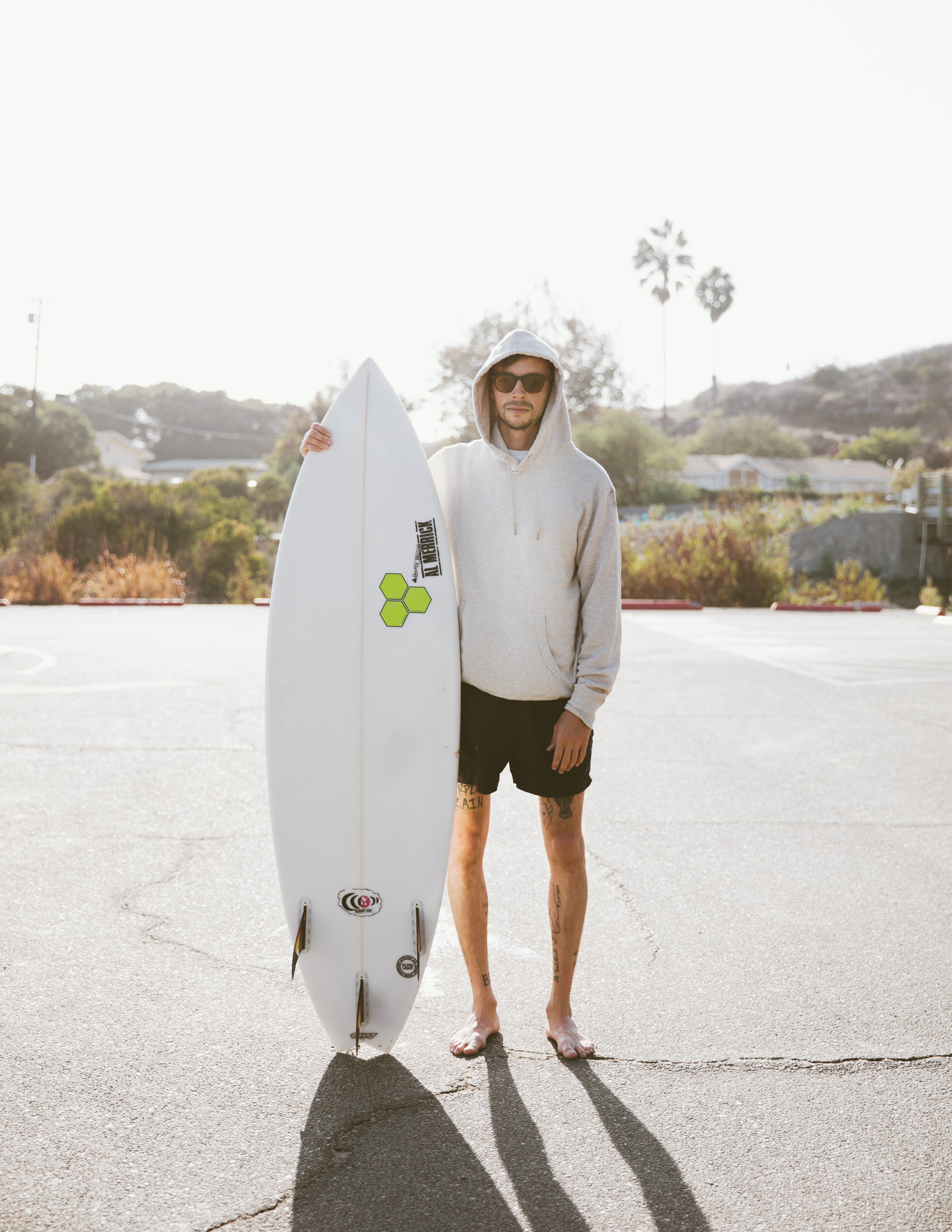 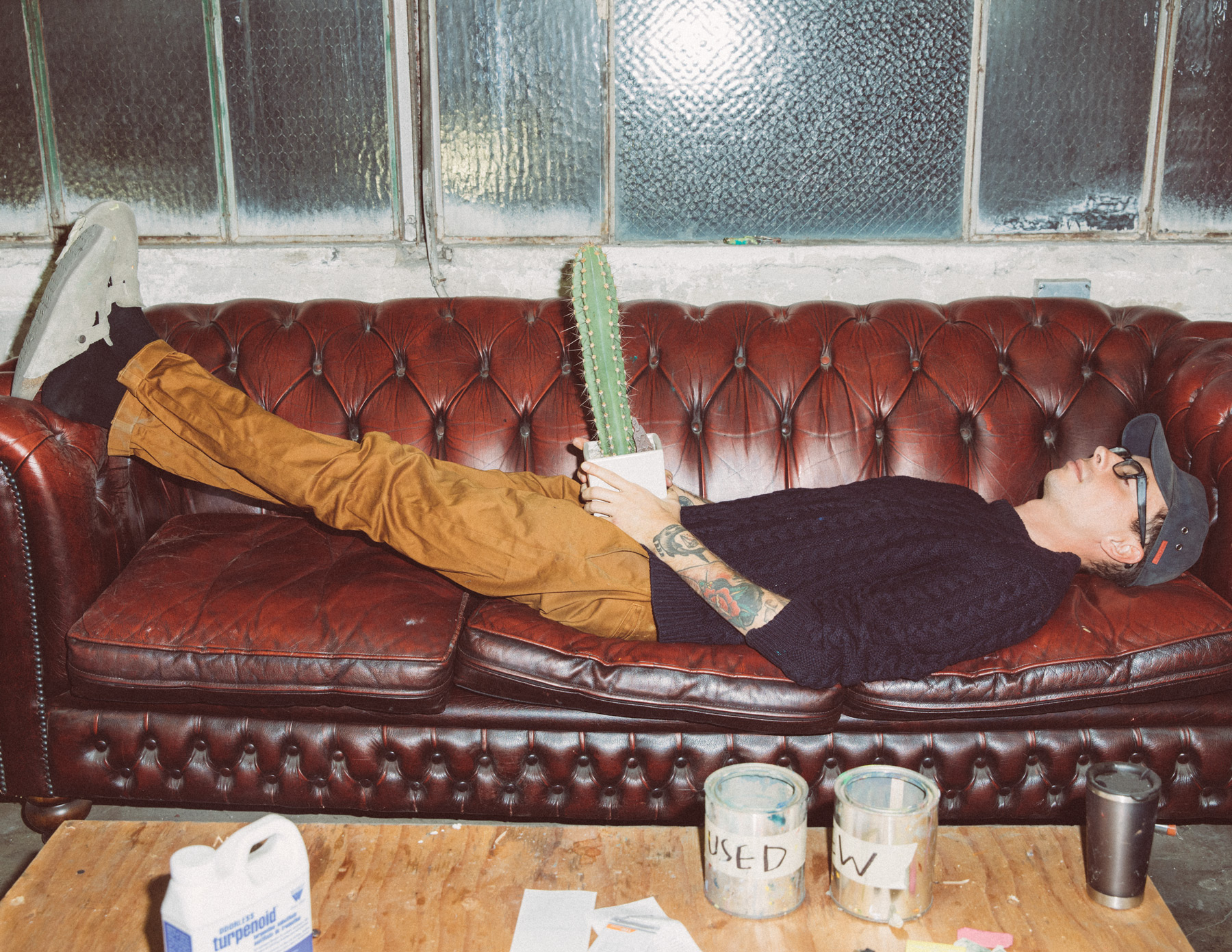