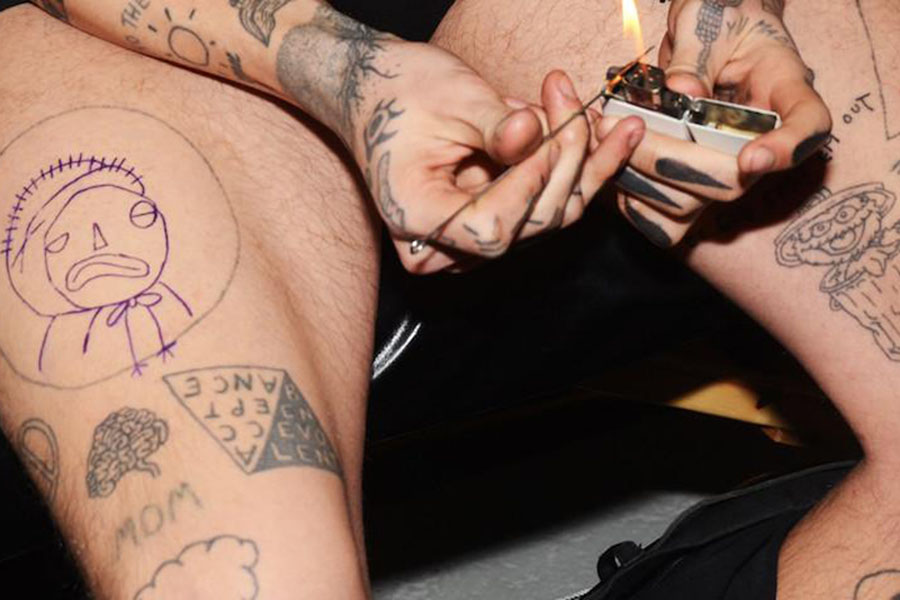 Stuck and Poked: The Mainstream Rise of Stick-N-Poke Tattoos

Poke. Poke. Poke. Repeat. Unlike a needle dragging quickly, tearing the skin, a stick-n-poke tattoo goes slowly. For the same tattoo done professionally with a gun, a stick-n-poke takes almost double or triple the time. Instead of a pricey tattoo from a parlor downtown, these tattoos cost as much as sewing needles and ink.

Spawned out of prisons as a way for inmates to give each other ink, has now become a cheap and hip form of tattooing.

“You know when you get piercings or tattoos and it makes you want to get more because of the rush?” says Francisca (Frankie) Gonzales, as she sits in Macy’s European Coffeehouse sipping a cafe mocha. “It takes so long that you’re satisfied for longer. It’s a longer adrenaline rush.”

The 21-year-old college student has three stick-n-pokes and five professionally done tattoos. The first stick-n-poke is a rather faded cactus her younger brother gave to her on her back as a tribute to their home state of Arizona. She has a constellation-looking heart and a line on her ribs, that her roommate gave to her while they were drinking whiskey and listening to Devendra Banhart. She also has a “postmodern” pear on her calf she did herself when she was bored. She explains that it was supposed to be a circle, but her hand was too shaky.

While she has no preference toward either professionally done tattoos or stick-n-pokes, she feels this form of tattooing is more personal than a tattoo parlor experience. Gonzales has also given tattoos to about five different people. She described the feeling of touching someone’s skin while she is tattooing them. While professional tattoo artists use gloves, stick-n-poke artists usually don’t.

“When you’re touching their skin like this, you can feel their goosebumps from the adrenaline rush or when they flinch from pain,” Gonzales says while running her thumb over the protruding lines of her newest tattoo. “You’re feeling their feelings with them and it is so fucking awesome.”

She feels as if this connects them to her forever.

“Be drunk when you get it though,” says Tyler Hannig another 21-year old college student. “Be drunk or be high.”

“No, high it hurts way more but drunk it feels like nothing,” Gonzales says.

Hannig has a few tattoos of his own, but most of them are not stick-n-poke. He prefers the traditional route of tattooing, through a parlor and with a gun.

“I like the culture surrounding it,”says Hanning, “but I’m just a big baby about tattoos anyway so getting one that takes double the time seems a little stupid to me. I’d rather just pay more.”

Gonzales compared the time between two of her tattoos. A detailed and intricately shaded acorn she got on her forearm took about 30 to 40 minutes and the simply-done Sahuaro cactus she has on her back took about 45 minutes to an hour.

Another appeal of stick-n-poke tattoos are the atmosphere and culture surrounding them. Gonzales received two out of her three stick-n-poke tattoos at a party specified for them. In ill-lit and smoke-filled rooms, friends lean over one another in deep concentration desperately trying not to mess up the art they are working on. Little containers of ink surround big bottles of alcohol.

Each tattooer makes sure to clean their needles and use separate inks. Music and the show Twin Peaks play lightly over the sounds of people mumbling “ouch,” “fuck” and “ok, wait.” The small room is buzzing with activity. People are coming and going, to buy more beer, pick up another friend or pay the pizza guy. Groups of people are drawing tiny, geometric tattoos on each other’s wrists while taking quick drink and smoke breaks.

Stick-n-pokes are considered dangerous because they are mostly unregulated. According to most health experts, the biggest risks are blood-borne disease and infections from people not disinfecting their instruments. They can also be significantly more painful.

“It’s hard to get them, because you feel the skin pop when you get into each layer. When you pull it out it has to pop a little bit too. If you don’t get deep enough under the skin then you’re just sticking yourself a lot for no reason,” Gonzales says.

The safest way to get this type of tattoo is by using India ink or professional tattoo ink, cleaning the needles often and using different ink when tattooing different people. Of course, it’s also possible to just use the ink from a regular pen.

“When my brother did it he just broke a ballpoint pen in half, dumped the ink out and did it that way,” recounts Gonzales.

But the appeal of the tattoos are also why they are controversial. That campy feeling of tattooing someone else could be illegal, depending which state you live in. Gonzales and Hannig both received their first stick-n-pokes when they were underage. They feel that because they are not regulated and considered more dangerous, the tattoos have a story behind them.

“I think that was part of the appeal though,” Gonzales says. “When you’re 17 you feel invincible and getting a tattoo slowly stuck into your skin proves that.”

However, for many, the appeal of the tattoo is the grittiness of it, how drunk you were when you got it or who gave it to you.

“The appeal of them is that they look elegantly disheveled,” says Hannig.

A former biology teacher, Nicole West, started selling stick-n-poke tattoo kits online for $42. The kits include professional ink, sterile needles, wipes, gloves and after-care balm. She has two other sets, one for professionals and one for partners, for somwhere between $63 and $72.

“The contamination of materials with biological pathogens from sharing needles with your friends can happen, whether you sterilize it quickly with a match or not,” West said in an article with The Washington Post. “You’re young, you’re intoxicated, you don’t know — HIV, hepatitis C, all the major killers that are bloodborne can be passed quickly.”

Badluck13supply on Etsy also sells kits from $25 to $65. Gonzales and her peers feel like selling a kit takes away the appeal of the stick-n-poke.

“Wow, capitalism is really encroaching on all my favorite rebellious activities. That’s so sad they are profiting off my attempted angst,” Gonzales said.

For artists like Sean Arnold, a college student living in Tucson, Arizona, it is more for self expression. Arnold manages Gentle Ben’s, a favorite Tucson bar and restaurant, while studying art and engineering. Arnold designed his tattoo himself — it’s a self portrait — and ordered professional ink online.

“I chose to do it this way because I considered it a form of self expression,” explains Arnold, as he gazes at the tattoo on this calf. “I wouldn’t want to pay someone else to do my own art.”

That, in essence, is the main goal of stick-n-poke tattoos. Although stick-and-poke tattoos are cheaper than the professional alternative, the trend isn’t necessarily about the cost. In the same way middle school-aged girls would pierce each other ears with needles in the bathroom, these controversial tattoos have a culture and secrecy surrounding them.

“For this type of tattooing, it’s more the experience than the final product,” Gonzales says. “You know, the journey and not the destination.”