Suavecito Souldies: How DJs TUFF and AWARE Create a Space for Soul in the Heart of Oakland

Sometimes the expression “the show must go on” is much easier said than done. What happens if the thorn in a show’s side is a water pipe that breaks the night of a very well-publicized soul vinyl party full of anticipated dancing, flooding the venue immediately?

This was the initial challenge the night of the First Friday of March 2018 when the Suavecito Souldies duo of DJs Tuff (Rene Lopez) and Aware (Cameron Thompson) attempted to produce their monthly party at the briefly flooded Golden Bull, with March’s party featuring the all women of color DJ collective the B-Side Brujas, who themselves became a collective via the Suavecito Souldies parties and who, just days before, were featured on the cover of the East Bay Express, drawing even more attention to the now flooded party.

For a brief moment, social media declared the event canceled before a backup plan quickly spawned: go to Stay Gold Deli in West Oakland, a little up the way from downtown. When I arrived post-detour, I introduced myself to Tuff and Aware before they dipped out immediately to grab a new PA; the one on site was blown after a metal show the night prior. Still, the crowd trickled in, beer and food orders were made, and Suavecito Souldies – the soul night, the dance party and mainly the community that fuels it – came to life. 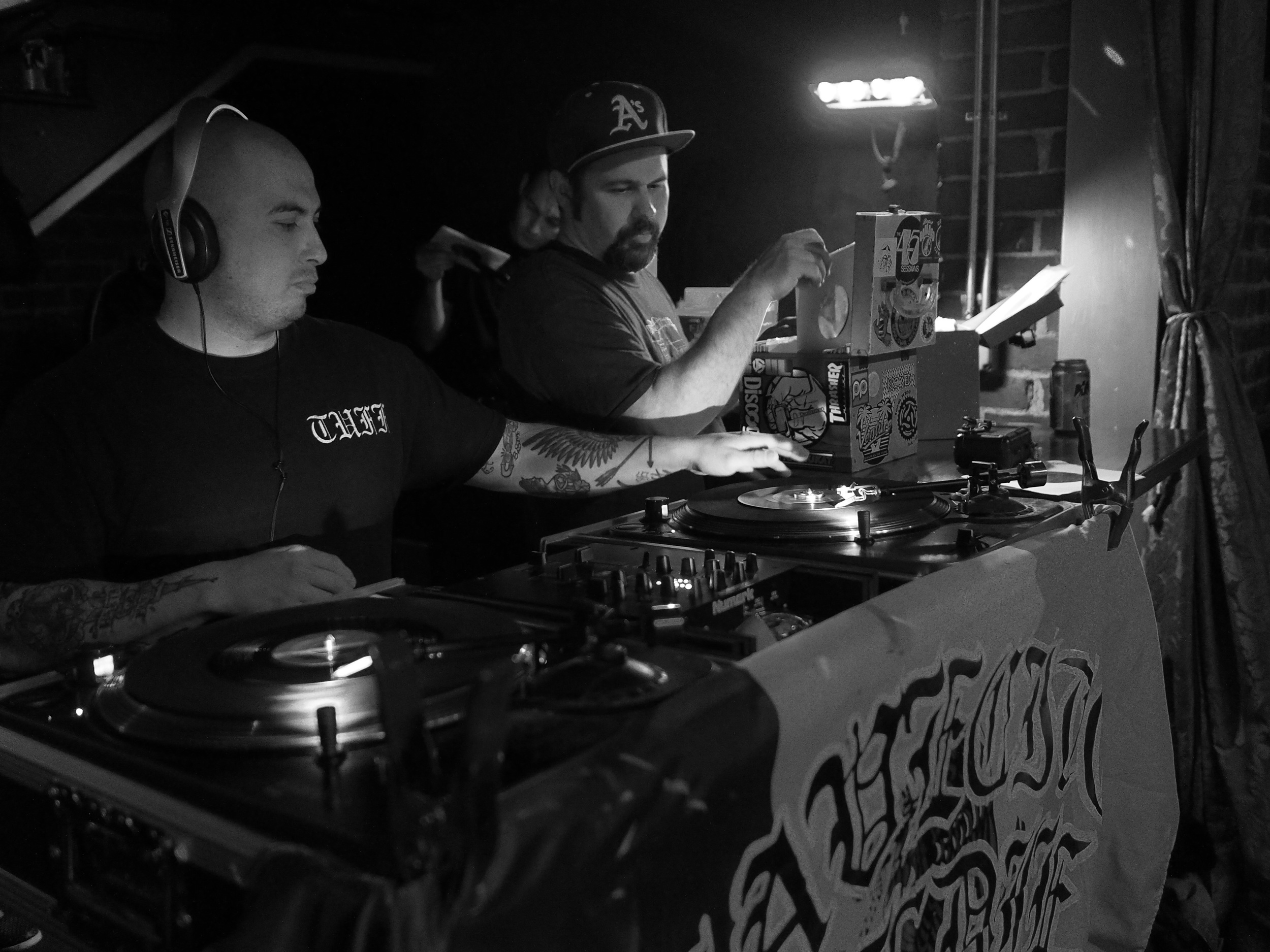 Since 2014 the duo has been holding down a monthly residency every First Friday at the Golden Bull in the heart of downtown Oakland off 14th and Broadway in coordination with the monthly art walk downtown. Centered around the duo but full of rotating guest DJs from local crews to out of town selectors from New York and across the Atlantic and beyond, Suavecito Souldies is a centering force for all soul crews across the Bay Area.

Growing up in Napa County, Lopez got into soul music through his family. “My mom was always playing Brenton Wood and The Temptations – all that.” The first flyer for Suavecito Souldies features Lopez’s mom and her sister in locked hands. “I was just kinda looking for an excuse to use that picture, it’s my favorite picture in the world.”

Each with a background in hand lettering and graffiti and other visual arts, the duo held a group art show at Beast Oakland in the Laurel District in the spring. Tuff’s artwork featured hand-lettered Old English painted on glass designs, in addition to an interactive installation featuring a clown stuck on top of a record inside a glass case that, when a button is pushed, plays The Spoilers’ “Sad Man’s Land” – Tuff’s favorite song. The Chicano visual aesthetic of Aztec warriors and goddesses along with the classic old English lettering is part of a larger visual identity for Suavecitos designed by Lopez. 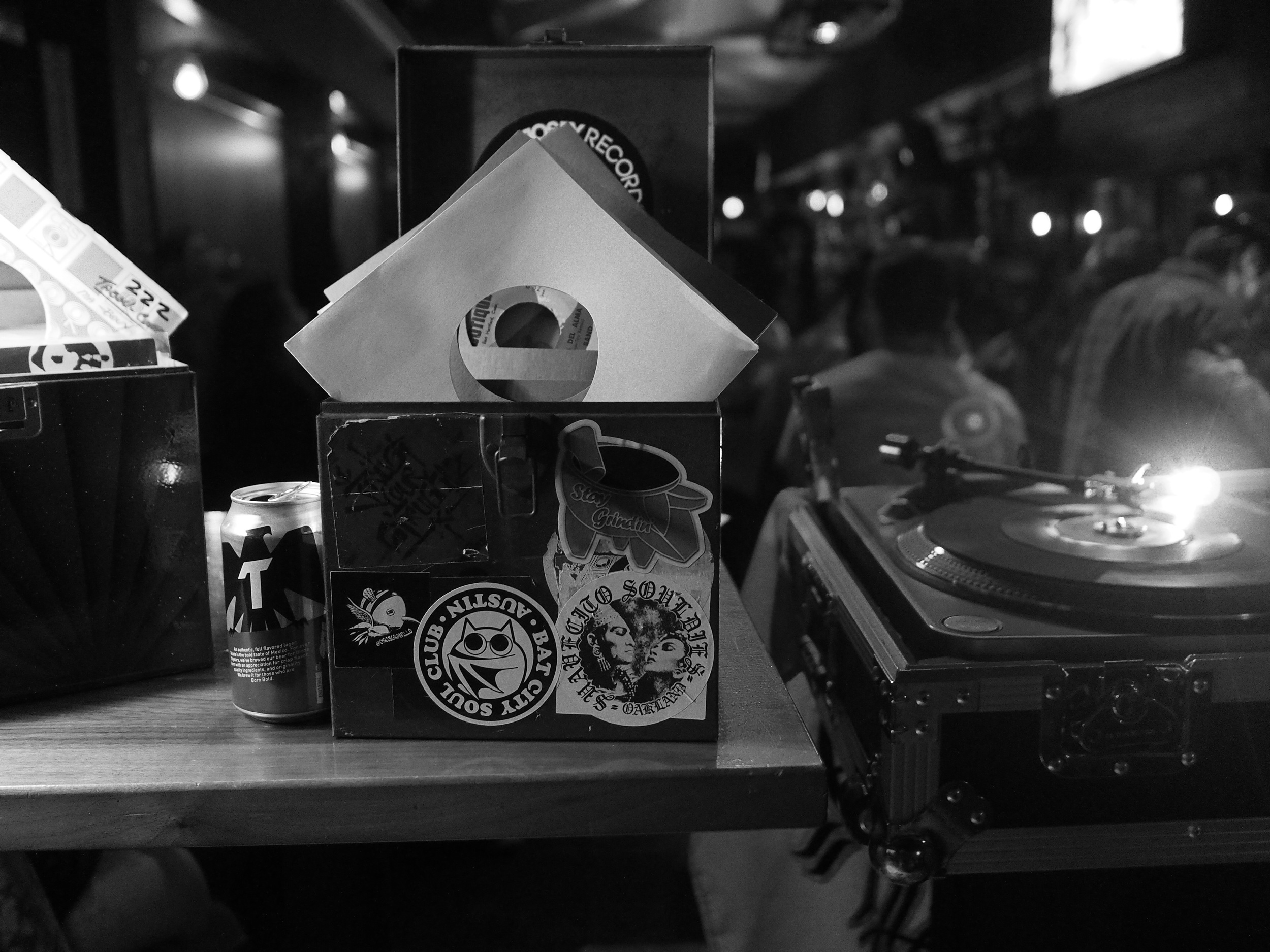 Thompson, a longtime contributor to the Oakland graffiti and mural scene including the pieces on the side of the Layover bar featured in the acclaimed film Sorry to Bother You, incorporated old vinyl labels into collages mixed with original drawings and illustrations. The duo both also DJ on local Laney College radio KGPC, a community-lead station that nearly was shut down earlier this year. The visual call and response as DJs and artists is part of Suavecitos’ DNA.

“We’re like collage artists; we’re not playing our own music, we’re playing somebody else’s music,” Thompson explains. “So we can play the dreams of somebody’s album that didn’t make it and also throw that in with somebody that sold a million records – it’s a balance.” 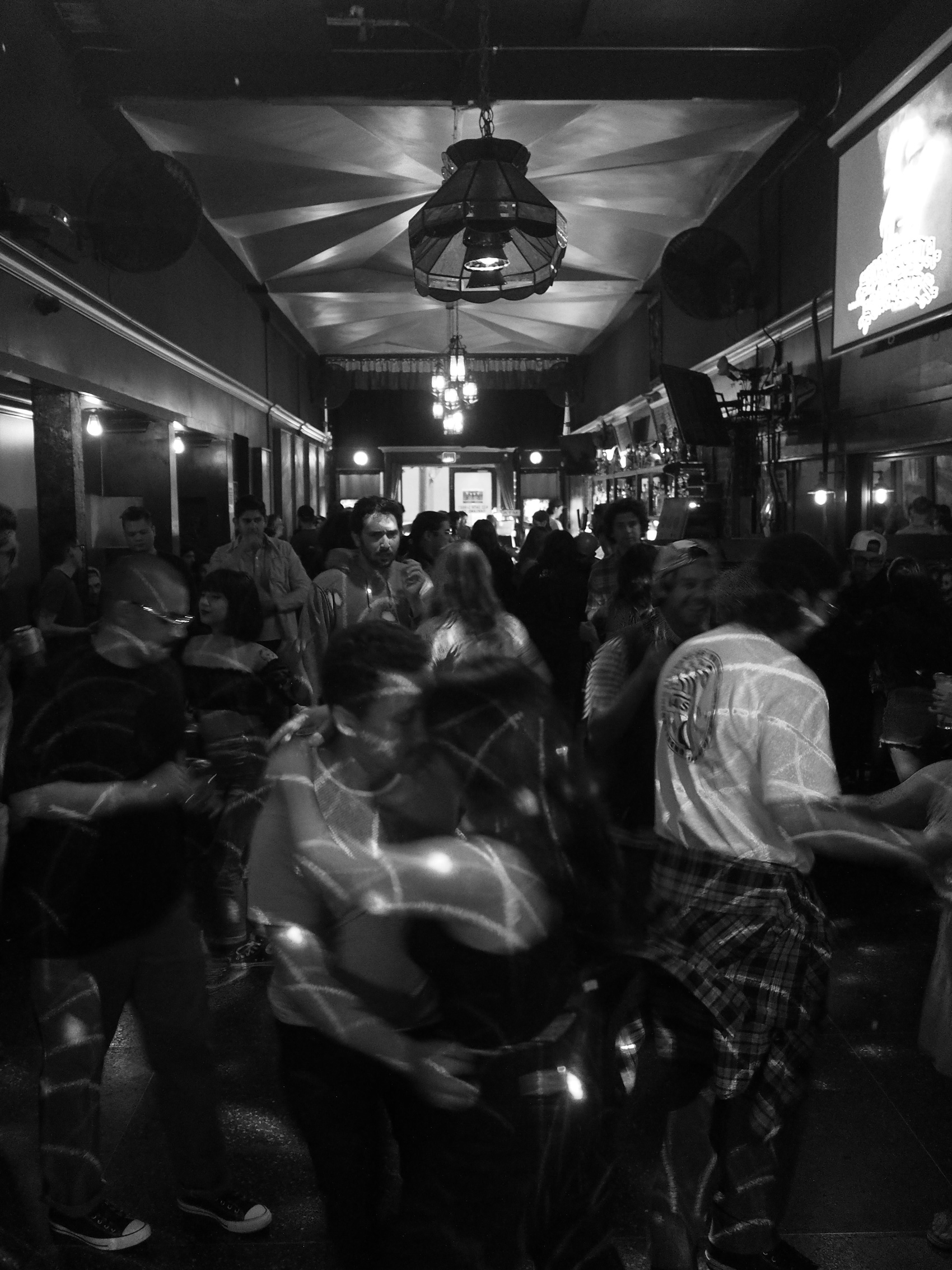 The Weekender was a testament to the success of strength of soul parties in the Bay Area, with these spaces ranging in diversity along race, gender, and economic lines. But those early years, according to Lopez, “It was just all my punk friends in Oakland coming out to support me. It was interesting to see because they were getting down, loving it. The other day I was looking at the first New Years Eve show from 2014, [in] the video there are studs everywhere, spiked hair dancing to Maxine Nightingale Right Back Where I Started From.”

For Thompson, mixing it up and expanding the sounds while rooting the party in soul music allows for branching into everything from old Kingston dub to Panamanian classics. “I probably branch off into the heavier Latin stuff, but even doing Cinco de Mayo, we were doing more boogaloo and even sneaking in the occasional guaguancó – and it works.”

Still, with the crowd exists an ongoing call and response between the groovers, the wallflowers, the lovers and everyone in-between – and the sounds that unite and propel them all. 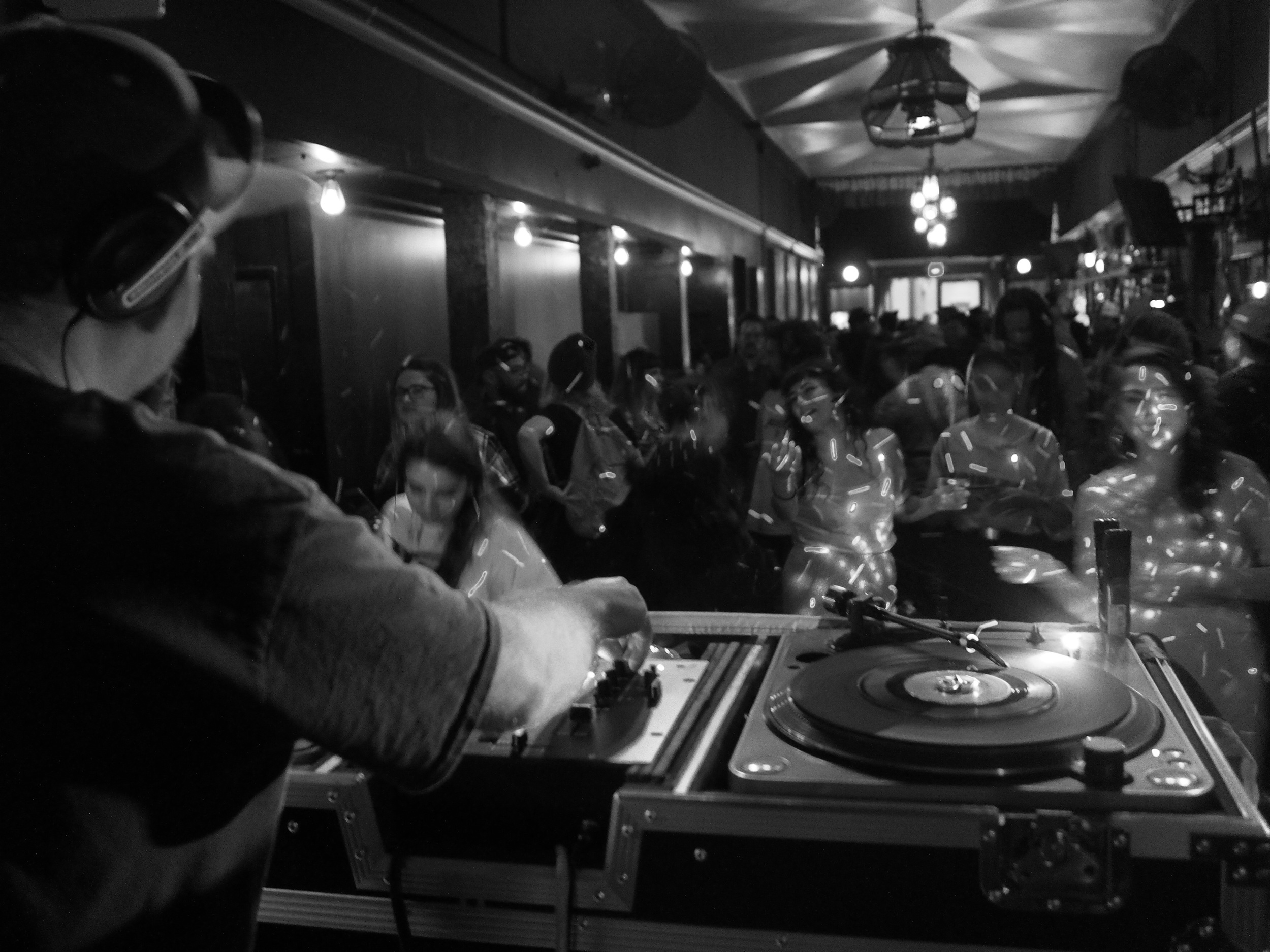 “It’s almost like you have to bait people sometimes with something that’s familiar to show them something that’s rare,” Thompson explains. “And if you can present it in a way that creates a feeling, then that’s what it’s about.”

Lopez and Thompson discuss the line between DJs who collect and sheer collectors.

“The price tag on the record doesn’t always matter,” Lopez says, laughing while describing the joy of being a DJ and watching folks trip on hearing an original sample or deep soul cut for the first time. “It’s like so pleasurable like seeing the crowd feed off of that – seeing somebody make that head tilt like What is that? I don’t know what that is? But I gotta get out there!”

The dance floor is packed this night in Oakland, with the crisis averted, the selectors playing the Four Tops into the night, the haunting ooo’s and lilting guitar notes scraped with a dusty drums elevates out the bar and the open back door letting in a cool but necessary draft into the sweltering after-house deli/bar/nightclub, with the Four Tops “Still Water (runs deep)”, the crowd singing along to the initial calls and responses of “Still Water!” as loudly from as packed a dance floor as the songs creators – and tonight’s selectors – originally intended.