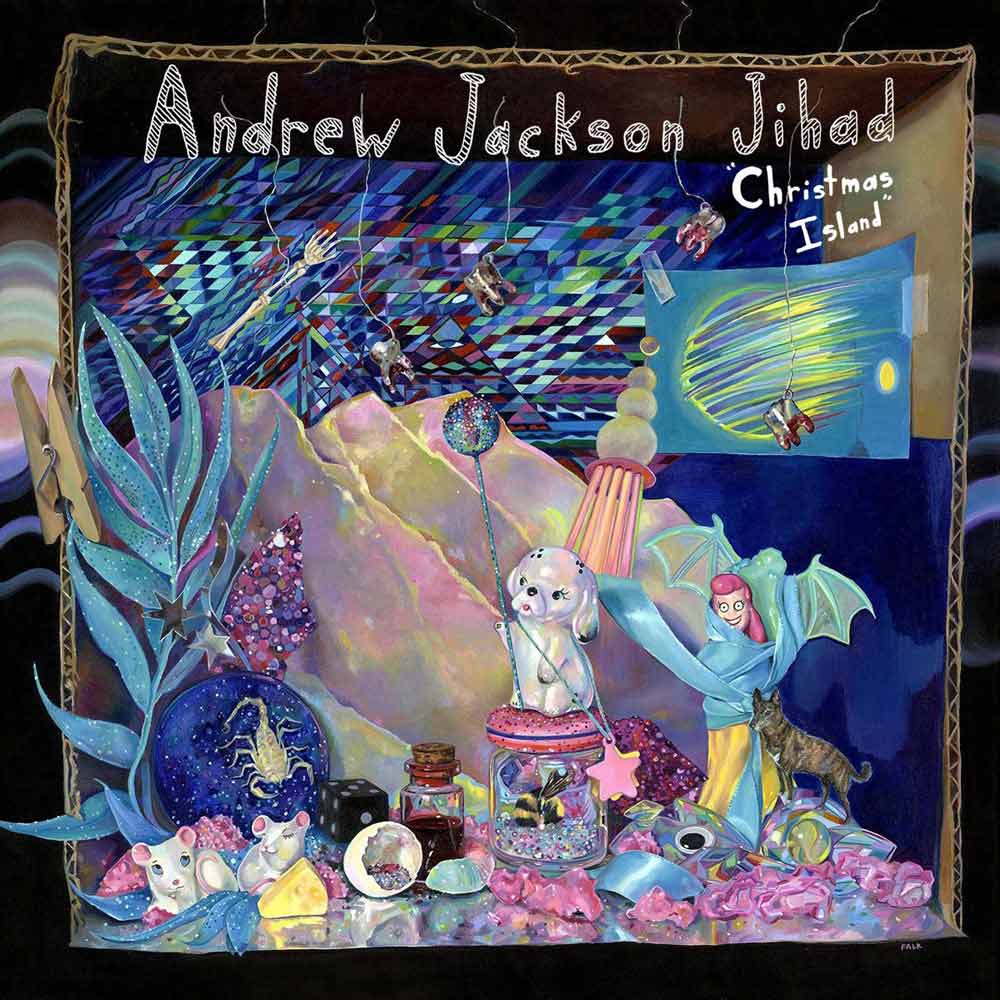 Despite playing hundreds of shows for the last ten years, Phoenix, Arizona based folk-punk group Andrew Jackson Jihad, is newbie to the festival game. Having found success from their tongue-in-cheek lyrics and twangy punk rock sound, the sonically eclectic set of five will take the stage next Sunday at Austin’s Fun Fun Fun Fest.

The group’s most recent LP, Christmas Island, creates a fusion of old vinyl recordings mixed with a smorgasbord of sounds including free-wheeling acoustic compositions, psychedelic grooves, some cello and fuzzy guitars. Varying anywhere from slow, feel good acoustics to quickly paced lyrics and instrumentals, Andrew Jackson Jihad continues on its path of seemingly nonsensical and humorous lyrical content; pure rhythm and amusement for its listeners.

As the group prepares to play the first festival of their career, lead singer Sean Bonnette caught up with amadeus to talk about the black metal band Venom, skating before his shows, and his own take on Fun Fun Fun Fest. Catch Andrew Jackson Jihad playing the Yellow Stage Sunday from 6:35 PM- 7:20 PM.

What are your expectations for Fun Fun Fun Fest?

This will be our first time at the festival. We are pretty new to the whole festival game. We are very excited. It’s going to be so rad.

Are you looking forward to seeing anyone play who you haven’t had the chance to see before?

Yeah, I am totally excited to see D’Angelo, seeing what the Wu Tang Clan line up looks like this time around. I’ve seen them before, but Ghost Face was missing and I was really looking forward to seeing him. I may pop in for a little bit of Venom, the only Venom I’ve heard is that amazing Banter tape they have. They were the first black metal band. If you go to our website there’s a post where we talk about FFF fest, and there’s a link to Venom’s stage manager from the 80s when Black Flag played with them. The guy is just hilarious, he’s super cocky.

Does the group have any pre-show rituals?

Most of the time we will just high five each other and get excited to have a good show. Pretty basic. I do vocal warm up before going on. I try to do them for like twenty minutes, but I don’t always have time for that. It seems like the longer I warm up the better I sing. Skating is actually a really great pre show warm. I skate about everyday. It’s super good for me. On tour skating is really great because it gives your more energy and I feel like I sing better when I skate before the show.

What are the challenges or differences you face when playing a small stage versus a large venue? Do you feel your stage presence changes?

The reason we can be more dynamic at a bigger show is because the PA systems are usually a lot louder, and we have a lot more control over what we can hear on stage. In a small room, provided that the small is packed, then you got a lot of heat and you’re really close to the crowd and you know there’s a much deeper connection with the audience, but there’s a bigger connection between band members when we play big rooms.

If you were to change the F’s in Fun Fun Fun Fest, what acronym would you create?