This is a preview of our feature on Adam in upcoming issue 19, out March 28th. Available for preorder here.

Observing the artwork of Adam Brierley is like taking a trip down memory lane—aged textures, crayon scribbles, fast cars, and the Wild West all juxtaposed together in a crazed melody that feels paradoxically in unison. Floating across these textures and time periods, Brierley creates a certain destructive construction that brings a sense of balance to the orderliness of his everyday role as the lead visual merchandiser at Herschel Supply Co. The SoCal-based artist never approaches a piece with an image, mark, or goal in mind, but rather begins to dissect and unearth his own meaning only once the piece is finished. An escapism of sorts, he avoids labels and approaches every piece with a clean slate and childlike curiosity that provides alluring results. 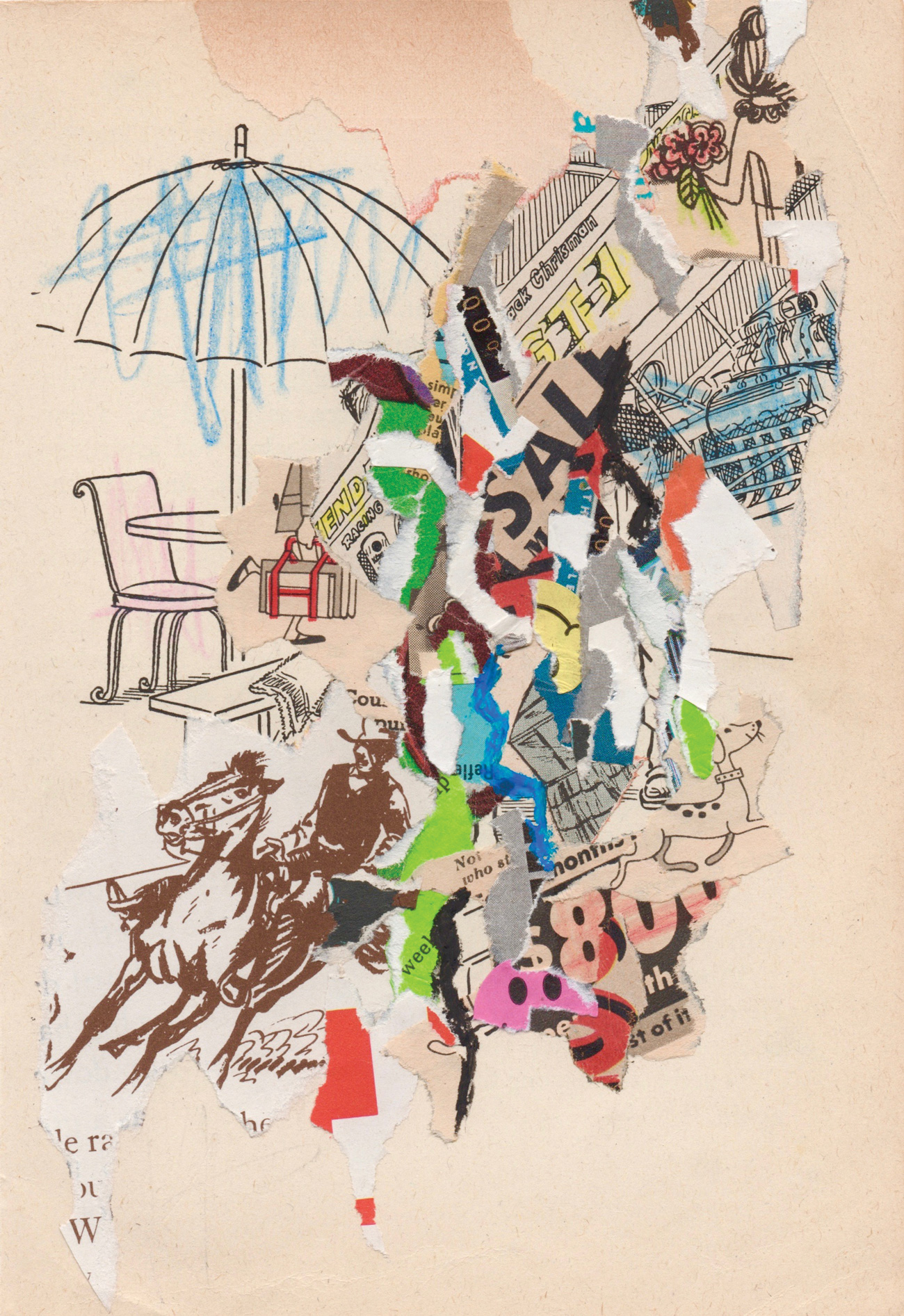 How did you get into art? What were your earliest influences?

Growing up, I was always taking photos and looking through vintage magazines around the house, like National Geographic. I think photography is what really pushed me into that world of art, as well as doing random collage-shit when I was way younger. I stopped doing that for a really long time. But, six years ago, I started back up and found my style.

I’ve read that some people describe collage as destructive construction, what would you say as an artist in that world?

I would say that. There are a lot of ways to do collage. Many people do it where it’s super neat, and that’s how I originally started, where the second you look at it, you know exactly what it is. However, I went away from that and I like the idea of having it be more abstract where you actually have to look at the piece to see the random details in it and create your own meaning.

There will be roses, or the line drawing from that Vogue magazine, a chair with some plants colored in, or old fonts which are also really cool. I did this one yesterday, where it looks like an old car from a racetrack, but it kind of looks like a car too. I’m working on another project making fifty to a hundred collaged postcards. They’re all a little different, yet are all visually connected when displayed together.

As you said, there isn’t a meaning at first, but the work develops a through-line when displayed side-by-side. Are there any themes you’re exploring in this current body of work?

Your work also carries a lot of Wild Wild West references. Is there something behind that?

Funny you mention that. I actually started picking up a lot of old Western materials and watching old Western movies. That fell into place with the pieces I was finding at antique malls and flea markets. If you look at my work, there’s a Western reference in almost every piece, a cowboy, maybe a lasso. I feel like the Western culture and vibe is original and a staple.

Are there any hobbies outside art-making that inform your work?

Music is a huge piece of it. I’m really into Elvis and The Rolling Stones—I even have an Elvis hat on right now. I love oldies too,  like the Supremes. Another big influence has been collecting and sourcing vintage clothing over the last ten years.

My mom was an artist, so there were always materials around the house to mess with, which also was a big influence. Nowadays, working downtown and walking around, I’ll see a wall of wheat paste that’s covered in paper from the last three years; all of it falling apart. That for me is a big influence. I’ll take a photo and look at that texture and see how I could replicate it myself. 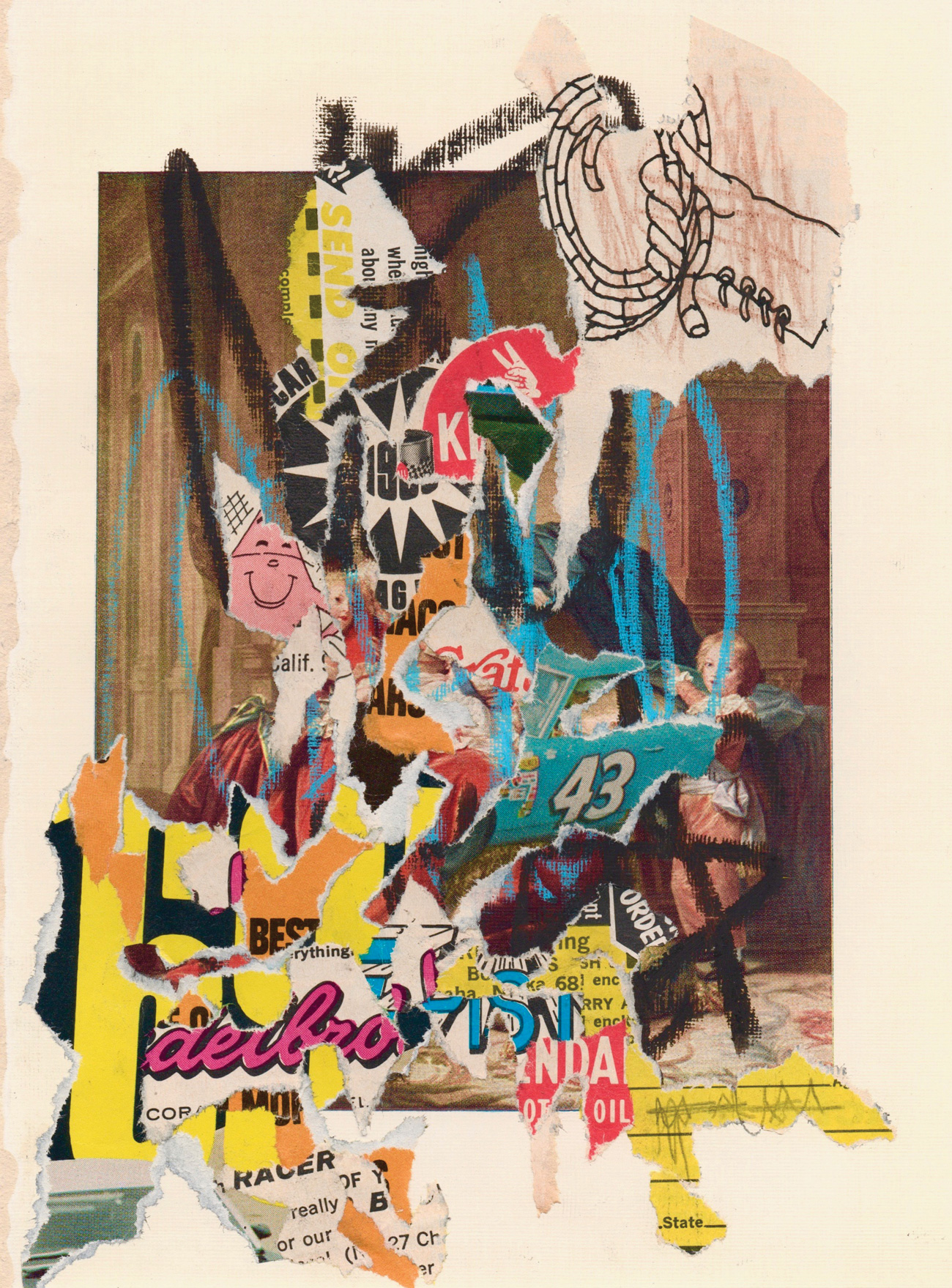 Those textures can only develop through time.

One-hundred percent. When you look at these walls of posters that have eroded over the years, it takes time to do that. But when you’re looking at it, you don’t see that, you just see ten different posters mashed into one. It’s the same with my work. It’s a bunch of different work mashed together and develops uniformity as a result.

The idea of looking at one of those street posters or one of your collages, at the end of the day, it’s just a visual image you perceive. We start to deduce the colors, contrasts, textures, and meanings upon further examination.

I like people to give their own meaning to my work and not point anything out.

What’s the process of pasting and putting your pieces together?

I’ll collect all my scraps and start gluing them down. I don’t even necessarily plan it out, I’ll just look at my source image. Say if it’s a postcard, the first thing I might put down is this hand and it will flow from there.