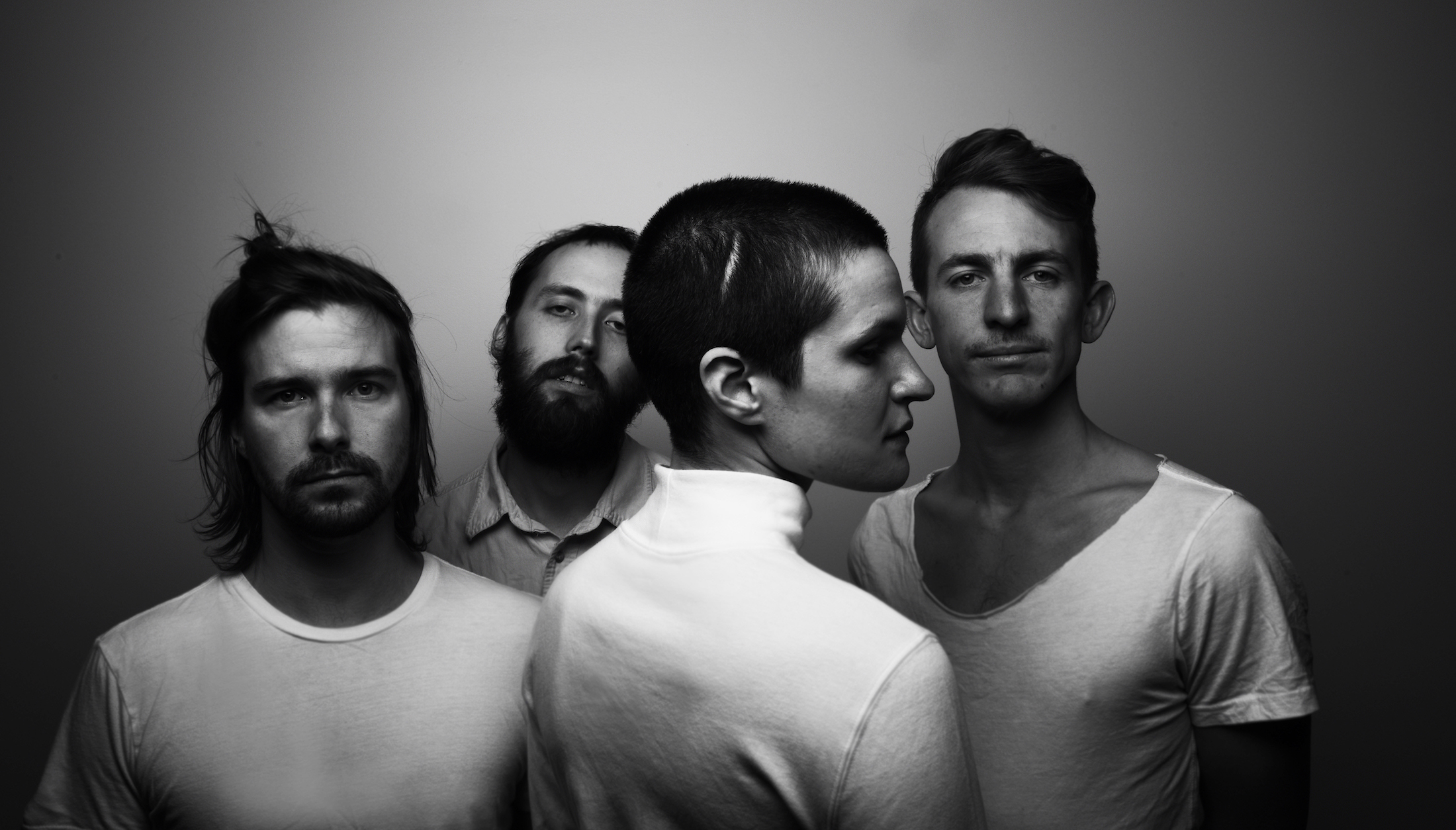 Big Thief is alright. There is a woman at the front called Adrianne Lenker who writes the songs and sings them on a hollow-body electric guitar. The tones are mostly clean and the songs carry on basically, in a classic rock kind-of-way, giving stronger responsibility to the lyrics to stand up for themselves. It’s structured Americana music, like Tom Petty and The HeartBreakers though not as polished, less hopeful, and more earthy. The lyrics are personal and poetic, often illustrating a setting, and a sequence of events that vibrate with a palpable emotional charge. I recommend reading the lyrics through, as the subtlety of her poetry is lost at times, in part by prioritizing the musicality over clear diction in their presentation. The band itself, brings to mind an analogy of the cabin in the woods with creaky hinges in the way that they seem a bit worn down by the surrounding environment, but with affection for the whole scenario, like, “it ain’t much… but it’s ours” kind-of-thing. Maybe that was the Americana vibe I was thinking of. The band is a four piece — guitar, lead guitar, bass, and a drum kit, that seems to favor minimal arrangements. As if to offer the bare minimum to support, and convey the fragile states presented of the narrator in Lenker’s songs. If she is anything like is portrayed in her stories then it might be said, “She carries a heavy heart.” The minimal arrangements though, however intentional, at times seem more like minimal effort, which puts more pressure on the singer to compensate for the looseness, and basically crystallizing a sadness by making it real every time they pick up to play. Where the songs themselves may be described loosely as “love” songs, the object of her lament and reverence often seems to imply a female partner which adds another layer to the tragic element present in the already solemn, and whispery music.

At this point I advise you to buckle up and prepare for something like a rant.

I have to admit, that I am not in love with this band. I know that must sound weird. How can you be in love with a band anyways? Loving one person is hard enough, throw in multiple members and your dreaming if you think it can last. That is what I think of polyamory, and those who practice in it are simply lying to themselves. With that, I’d like to step back from Big Thief, specifically, for a moment, so that I may describe in broad images, the environment, presently, of a culture that provides the context for bands and artists to operate from. Now, I don’t love a band that is not authentic and original. I understand that we are all influenced by what came before us, but there is a line between forgery and honoring the lineages predating us to create something that resonates with our hearts and souls. I don’t think it is novel for a band to over indulge in sadness nor is it impressive to glorify it. And you’ve seen when bands tries to cop a whole scene from the past, like the dark dance halls of the eighties with synth and disco fever, cocaine and all, or the stoned after-burn of the seventies, or the freaky nineteen sixties, etcetera, the list goes on. It is fruitless. Merely attempts to recreate a moment that can never be again. It reeks of superficiality, without capacity for a more genuine expression.

Popular cinema has the same fascination with doing “timepieces” from recent decades. A faux-nostalgia. I find the whole thing not just sloppy and boring but invasive and chock full of ulterior motive. Like trying to rewire our brains with this impression that we already know everything (probably because of the internet). Like you can study David Bowie’s discography, watch documentaries, read articles, look at pictures and so now you know the times like you were there. All that’s left to do now is the drugs and poof! You’re authentic. The drugs, and the sex (especially a queer experience). Now you’re in! I resent this approach and yeah, maybe I’m a bit callous in my description, but this misguided and continuous grasping for the superficial instead of the worthwhile is not without consequence; eventually killing what you claim to love. Bowie and Prince in the same year…and the snake eats it’s tail. The fact is that I do not see or hear enough people within “the know”, taking a critical eye of what is passing off as good or essential or informative of a culture that is now, and not then. Truly authentic to the times. I don’t see much that really does it these days, and you might say, “it’s there, you only have to look deeper.” I don’t really believe that though, because the cream rises to the top. Look around, it’s just a bunch of people passing something off from prior times, as theirs. Why not identify the breakdowns in the artists you admire, criticize their choices and ultimately transcend? Instead of merely praising them.

For all of you “artists” out there. It is not supposed to be comfortable. It should stop feeling like anything because it’s you, duh! It’s you and you haven’t been here before to show everyone what you’ve got. Have you? Culture in general has been like flat soda pop and processed bread. It’s there and the shelves are full, but by consuming it you are ultimately filling your body with stuff that is incapable of providing the goods that your body and mind need to thrive. It’s accessible and it’s cheap and you can have as much as you like, but is that good for you, or your growth? (i.e. Spotify). Give me something that doesn’t rely on a fucked up headspace. Like that’s still impressive. What are we fourteen? Too many bands are half-baked and mediocre, fronting as exceptional because they soak their guitar tones in obnoxious levels of reverb, and studio tricks that involve machines, then call it dream pop. Who do you think you’re fooling? You can’t be rock and roll and also a latte-sipping iPhone commercial. When did the pinnacle of art-making become aligning yourself with the marketing campaigns of Apple and Google? That’s weak. People really want this thing called “future”, and they think if they subvert their individuality for the collective persona sold by the current corporate megaliths (under the guise of humanistic virtues but really to satiate their own corporate interests) that they’ll be rewarded for it. Nah. It’s never coming. The wool is pulled over your eyes and you’re actually just wasting away your precious time. It’s a hard pill to swallow and it will probably be a rough adjustment at first, but it really is the only way, and you’ve got to know this or you’re done for. Plain and simple.

Big Thief releases their album Capacity on June 9th 2017. The band that supports Adrianne Lenker, as I’ve alluded to earlier, is kind of weak, so it forces the listener to give their attention to the only other possible redeeming factors, lyrics and voice. Her voice is unique, it’s mostly subdued. but in live performances she may shriek in an emotional crescendo. As a band, they are still green I think, and still grinding. I think the ticket price to see them live could justifiably top out at like eighteen dollars after tax. I’d feel comfortable paying twelve. If you like subjective, and personal, and intimate in a performing artist reflected in both singing and lyrics then Big Thief is something new to try on. Unfortunately it’s a bit of a one-trick pony. And after only some of a set you may begin to notice the pain in your legs from standing still and staring forward. Hopefully this new record has more energy to it to balance out the chronically grieving vibe. News flash: melodrama is not that impressive. Let’s have a smile once in awhile, eh?

She can write a song though, it’s true. She’s got a sense for it. Again, that Americana descriptor coming to light. “Shark Smile” chugs along like a classic, especially, in the way that she uses the word “baby” when referring to her partner or person she’s singing to. If that isn’t classic in contemporary music then what is? I think the song is about smoking something (probably weed) in a car and trying to be affectionate at around the same time which results in an accident. A cautionary tale, of sorts.

“Mythological Beauty” is their other most recent track. I really like the line leading to the chorus where she says “if you want to leave, you just have to say, you’re all caught up inside…” Shining light on all the losers who duck out on being real in relationships with bullshit excuses. My take at least. And this is promising I think. A critique of a certain detestable behavior, and a sign of self-respect and maturity from this front lady. She sounds almost like an old pro. I hope the album has more of that flavor. The chorus is catchy. It’s a catchy song. You might just start to like it after a while.