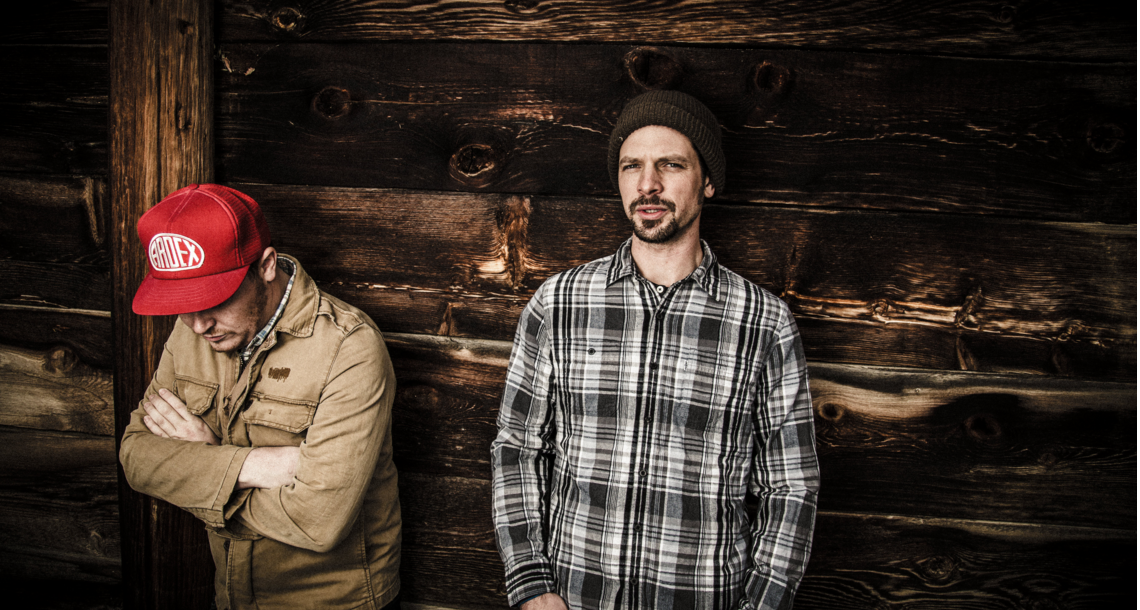 Boise-based Americana, folk artists, Curtis/Sutton & The Scavengers welcomed summer in true nitty gritty style last month with the release of their latest, self-titled EP. A plethora of rockabilly, folk, bluegrass and country, their six-song EP is speckled with a finely tuned style that draws listeners of all genres.

With Ryan Curtis and Charlie Sutton being at the helm of the group, The Scavengers are an ever-rotating door anchored down by its core member and stand up bassist, Sam Alkire. Finding their musical partnership in 2013, Curtis/Sutton have quickly gained a dedicated following within the burgeoning music scene of Boise, ID.

We had the chance to chat with Curtis & Sutton where we spent time learning about the Boise music scene, a musically informative Midwest youth and the collaborative pieces that form Curtis/Sutton & The Scavengers.

Who does the majority of writing in your group? Is it a collaborative effort, or does each band member try to bring some idea to the table?

CS: We are both songwriters and write an equal amount of songs. The style of the song usually dictates the arrangements. At first we experiment to figure out what instruments work best for what particular song for instance: Blues (resonator), bluegrass (banjo), folk (acoustic guitar) rockabilly and surf (electric).

Ryan is a great rhythm guitarist and adds the backbone to my tunes. Sam has a knack for writing bass riffs that are complementary to each of our tunes.

RC: It’s always fun to bring new tunes to practice, just to see where they end up going. Charlie is killer instrumentalist in addition to being a great songwriter, so for me it’s a pretty cool thing to watch a simple blues or folk tune of mine start to take shape with the guys. Sam brings it hard on the upright as well. The band was never quite complete until we got him on board. That only took us about 13 months of craigslist posts.

Did anything influence your country-folk sound? Has the style changed from when the group originally formed?

CS: I love Piedmont style blues such as Rev Gary Davis and Sonny Terry/ Brownie McGhee. As far as country-folk, I’d say: Woody Guthrie, Jimmie Rodgers and Hank Williams. I also listen to a lot of acoustic guitarists such as: John Fahey, Norman Blake, Duck Baker and Elliot Smith. Our style is pretty similar to what we originally started with but recently we have written a lot of dark, minor key folk- blues. Currently we are working on some garage/ surf numbers and a few bluegrass tunes.

RC: I’ve always been into the blues, but my love for traditional roots music, like Rockabilly, HonkyTonk, Bluegrass and the Old School Country kind of stuff came to me as an adult in my early 20’s. I actually grew up playing in punk rock bands as a teenager and I have a lot of influences along those lines as well. To me a lot of the same energy and ethos from that kind of thing finds its way into our music just in different ways.

How have your roots from the Midwest informed your musical taste?

CS: I lived in St. Louis for many years and my uncle Chuck ran a few clubs and booked bands like Wilco, Hank the 3rd and Old 97’s. I worked as a busboy at Chuck Berry’s bar in my teens and spent half of my tips buying music at “Vintage Vinyl.” In 2012 my uncle Kevin won the International Blues Challenge on Beale Street in Memphis. I used to roadie for him back in the day and sit in the back of the bar drinking water. Eventually I got old enough to play my own gigs and fronted my first band in St. Louis called Spud.

RC: I grew up in Northern Michigan in a pretty small town. There really wasn’t much happening musically there, so my friends and I really had to start our own bands and create our own shows. It was a blast, but still pretty limiting in the pre-internet days. To see a real show, we really had to go all the way to Detroit which was about 3 hours away. That being said, when you’re in high school going to downtown Detroit to see a punk show at St. Andrews Hall or to a warehouse rave is probably the most exhilarating shit on the planet for small town kid. Even in college we still headed to Detroit for most shows. A lot people that I’ve met since I moved out west, think Detroit is pretty nuts, which in a way it is, but there’s just an incredible amount of resilience about the place. There’s still a ton of people making killer art and music in that city. I moved to Chicago a couple years after college as well, yet another incredible music city. It’s next to impossible to live in a place like that and not have it influence you. I’m going to stop talking about the Midwest now, I’m getting homesick.

Talk to me about the Boise music scene and how you have seen it develop. Is it a supportive community?

CS: It’s pretty inspiring how many talented folks there are in Boise. The musical community has been very supportive. I feel fortunate to live in such a thriving, artistic community. Treefort is mind-boggling and has exploded and there are several festivals that promote local and regional acts. I’m also an avid listener of Radio Boise 89.9 and 93.5. I look forward to Sunday because of all the killer shows–particularly Sunday Soul Party.

RC: Boise is a little off the beaten path, so we don’t get a ton of the larger “Indie” touring bands coming through. It’s a bit of a bummer, but at the same time it’s kind of a blessing in disguise because it puts a ton of focus on the local and regional scene. And yes we have a pretty killer music scene here. We got some great promoters in town that keep the scene moving and people in general just really care about coming out to shows and supporting live music.

CS:  We recently played with a band called “Frankie and the Witch Fingers,” they put on a stellar show.

RC: I shouldn’t comment on current crushes, I’m sure my girlfriend will read this.

Make sure to check out Curtis/Sutton & The Scavengers latest EP, available on Spotify and iTunes! Also catch them one of their many  tour dates.