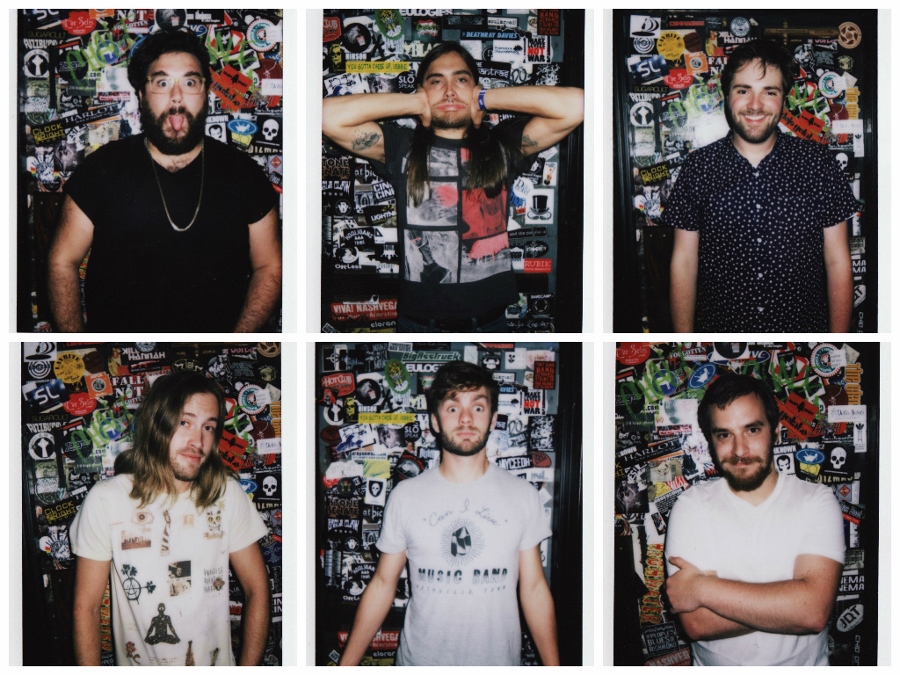 The first sentence of Diarrhea Planet’s bio answers the burning question of band title, no pun intended: “’What’s in a name? That which we call a rose/ By any other name would smell as sweet.'” But apprehensive listeners can be well ensured—this name is in no way suggestive of the quality of music. One could say that the name Diarrhea Planet was a mistake, a gaffe, or a happy accident; the perfect name for an equally rare sextet. In the words of Evan Bird, lead guitarist of the bunch, “With a name this ridiculous, we have surpassed even our wildest expectations for the band.”

How the name came to existence is a story all in itself. “We knew we needed fourteen letters,” says Bird. “Fourteen was just right. We settled on ‘All Cyclops Wept.’ That sounded like a bad metal band. As it were, ‘All Cyclops Wept’ is a perfect anagram of ‘OTLCCSPLAWLYPE!’ Crazy, right? We knew we were getting close. We rolled two dice: 11. Great. We used a simple Caesar cipher with a shift of 11 on ‘OTLCCSPLAWLYPE’ which yielded ‘DIARRHEAPLANET.'”

Diarrhea Planet, a Nashville, Tennessee band of six, has been producing music since 2009, the same year that the group self-released their first EP, Aloha, which racked up 10,000 free downloads and set in stone their relevancy in the musical world. It was in 2013, with their second album, I’m Rich Beyond Your Wildest Dreams, that the party of six would receive the most attention, landing them spots at SXSW, Governor’s Ball and Bonnaroo.

The band just released their third EP, Aliens in the Outfield, and the reception has been great. With a matchless sound, rich with guitar riffs, the group boasts melodic rock, and it is with that style that Diarrhea Planet set off to create an EP that shows off their stage presence, both on and off stage, mirroring the energy and chaos the group creates while performing.

“We tracked it at Ronnie’s Place in Nashville with Justin Francis (Anti-Flag), and some additional mixing by Vance Powell and Ed Spear at Sputnik Sound,” explains Bird. “We used better gear this time around and had plenty of time to get comfortable with these songs, and I think it’s reflected in how this EP sounds. We’re very pleased— this is the closest I think we’ve ever sounded to our live show on record.”

“Six people is a lot of cooks in the kitchen, definitely, but we’ve been playing together for long enough now to have a pretty good idea where each other are coming from and know where each person’s strengths are best used,” says Bird. “You’d imagine it would be a bloodbath trying to decide anything, but we’re in a great place!”

Regardless of the group, recording an album is tedious—the task of reaching a collective agreement is never quite as enjoyable as playing in front of a live audience. “As a band, we really shine live. I love playing live and being able to interact with an audience and get a little push-pull going back and forth,” says Bird. “Everything about playing live is more fun than simply recording and releasing it, at least for me. It’s impossible to replicate the energy and overall experience of our live show on record, but we’re getting closer and closer.”

Live sets and devoted fans drive the band, but living in such a musically inclined city has also supplied them with the push towards reaching their musical capacity, Nashville has been known to harvest some of the best groups in history, with artists ranging from Townes Van Zadt to The Black Keys, and Diarrhea Planet is in a hub of good company.

“The musicians we have the fortune of being friends with are all doing it for the love of the game, and all give back and boost each other every chance they get,” says Bird. “I’ve never seen a sense of community done quite this way anywhere else, and it’s unbelievable to be a part of it. We would not be the band we are, or perhaps not even still be a band, if not for the support we received from our music scene, and we try to show thanks and give back every chance we get.”

An ever growing fan base, a unique and incredible city to live in and a positively received EP—three ingredients to continue leading Diarrhea Planet on the path towards success, a privilege they’re fully aware of.

“I don’t think that growth has put any pressure on us, though I think we put pressure on ourselves to try to put on the best show we can for those fans,” says Bird. “Keeping it engaging and keeping it exciting and high-energy can be challenging, but we love what we do and love that we are able to share it with so many people.”