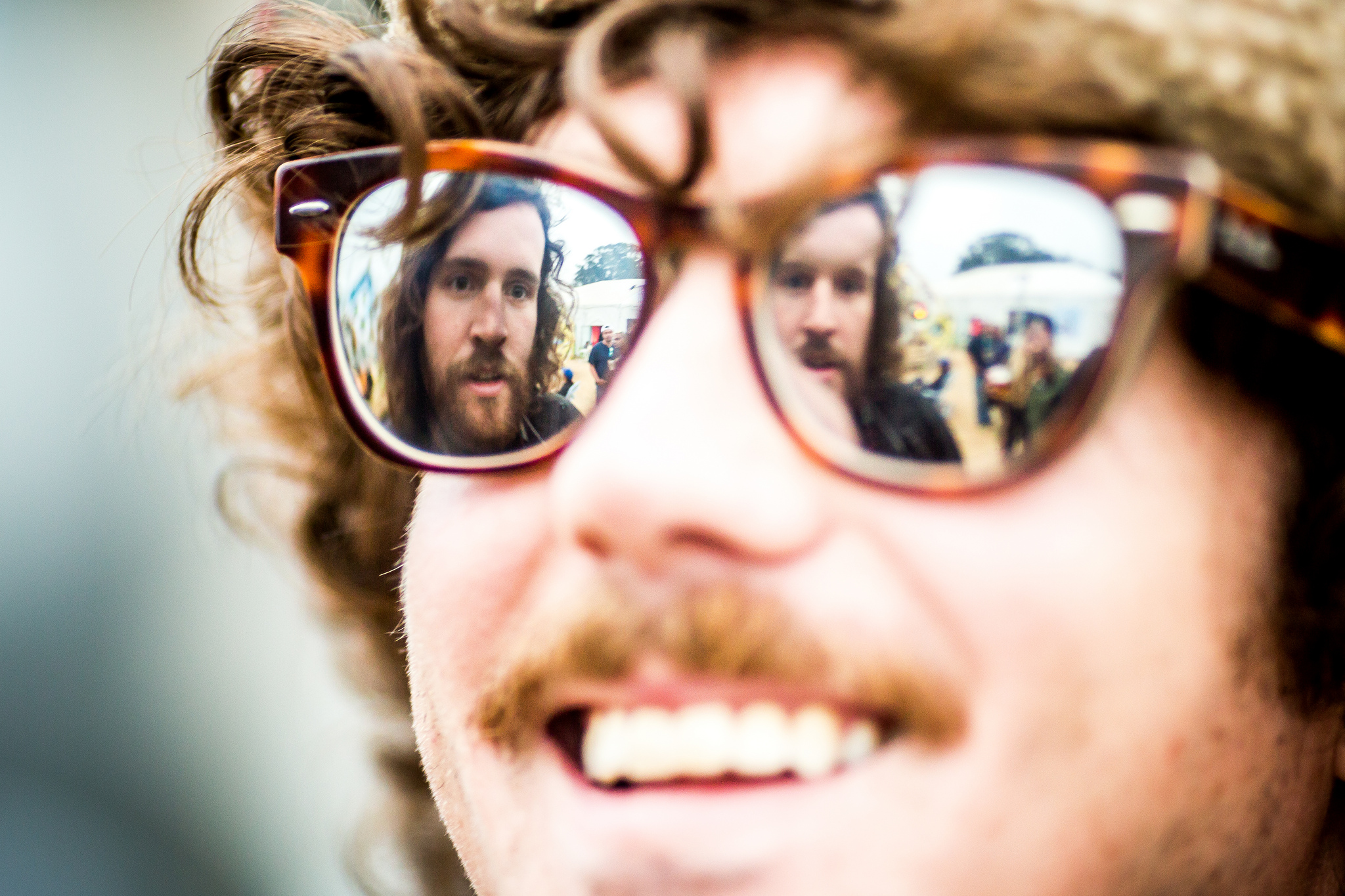 Futurebirds sometimes like to refer to Athens, Georgia as the seventh member of their ensemble; a perfect, small college town that has allowed musician’s to find support amongst the community for years. Athens stands as the birthplace of Futurebirds and the sound that the country, yet slightly psychedelic sextet are so widely known. Their recently released LP, Hotel Parties, follows their 2013 album Baba Yaga, and marks a definitive and more sonically direct album.

Now based out of Nashville, Tennessee, Futurebirds focused on finding a more distinct direction in producing Hotel Parties. Pulling in the spirit and enthusiasm that can be heard and seen during their exuberant live show, Hotel Parties harnesses a new energy with a more stripped-down rock sound than on previous efforts.

Dropping the extra reverb and excess acoustic instrumentation was not the only change Futurebirds toyed with on Hotel Parties. The group decided to bring on Brian Paulson to mix the 2015 album, at least in part, to help steer Futurebirds in a cleaner, more concise direction.

We had the chance to catch up with Futurebirds’ singer and guitarist, Carter King, where we got to talking about their hometown in the Poultry State, working with Easy Sound Recording, and the band’s eternal crush on Diarrhea Planet. Be sure to catch one of the two shows this weekend at Larimer Lounge in Denver, Colorado.

You recently released Hotel Parties, how did you approach this LP compared to your full length album Baba Yaga?

We recorded Hotel Parties with a little more direction. We all kind of moved to different parts of the Southeast. With Baba Yaga, we were all still living in Athens. So we would come home from tours and have a week here, a week there. We would book studio time when we wanted to. There was endless tinkering and no real deadlines. With this new one, we had to pick a spot, pick a couple frames of time, and so we kind of gave ourselves essentially, 10-day windows to get together and record to make the record. It was more focused in that aspect. We didn’t have the luxury of just like blaring into the guitars, vocals, and everything. I think it worked well because the songs on the record were more direct in nature.

How has living in Athens influenced your sound?

Oh Athens. We say sometimes that it’s the 7th member of the band. It has such a prominent musical history. Everyone who interviews us wants to know how Athens has influenced the band. It’s an enormous amount of influence. It’s hard to say exactly how much because we haven’t started a band anywhere else. It’s the only place we know. What Athens is really big for, which we’ve said a bunch too, is that Athens is a small college town. So, everyone in the music industry is supportive of other bands. Club promoters, other bands, everyone’s kind of looking out for each other. It’s a great spot to get your shot. You want to open up for the big national act coming to your town… you’ve got a much better spot here, then let’s say, Los Angeles.

Yeah, we haven’t all lived in Athens for about 3 or 4 years now so I feel kinda guilty talking so much about it, but yeah it’s forever home base. We were born there, well the band, not us as people.

So where else do you pull your inspirations from?

Just in general. Where do you personally look for inspiration; from people, places…?

My thing on inspiration, influence, that kinda thing… it’s all just such a fluid thing in my mind. A lot of it happens underneath the surface so it’s kinda hard to pinpoint and say I’m going to give you a list of ten things that inspire me. Sometimes you see a movie and it’s just like, ‘oh my god!’. Or you have a conversation with a friend, or you see an old photo of your grandparents when they were young. It’s just a very vast thing that happens to you. You try to seek out inspiration all the time, I try to keep myself in situations and places and work around people that are inspiring in general. It’s something that finds you, you don’t find it.

Where did the name Futurebirds come from?

That came from a poultry evaluation class I was taking when I was in school.

There are classes for that?

Yeah! Georgia’s the number one poultry state. So you know, if you’re going to be a resident of Georgia it’s in your best interest to know how to handle a chicken. Like what makes a Grade A egg, a Grade A egg? But it was also just an easy A. In my class, the professor was telling us a story one day of how these old Roman armies used to use chickens to predict the future of battles. They would look at their eating patterns and stuff, which was just funny to me. It was just born out of that. Like Futurebirds…that’s got a nice ring to it.

Hotel Parties is the group’s first album with Easy Sound Recording. Why is the band on that label now?

So Steven Brower from Easy Sound has been a fan of the band for a long time. We’ve talked about putting out previous records out together before this one, it just wasn’t the right situation or it wouldn’t work out. This time though they were kind of able to offer the exact partnership we needed, and above all else, he’s been such a big fan of the band for so long so he was still kind of knocking on our door like, ‘Hey what’s the deal with the next record?’ We were like, ‘Damn this is awesome. He really believes in what we’re doing.’ You can have a label with all the money and power in the world but when you have someone there that’s like part of the team and is really in to what you’re doing, that’s the main draw. Someone to support and love the band. They’re also really smart and plugged in people.

That must be nice to have support before you’re on and working with a label.

Yeah, but the thing is, you talk to everyone and they’re telling you what you want to hear like “Oh we love the band blah blah blah,” but when someone’s been in it with you for years, it’s like, ‘Okay, there’s substance to what they’re saying.’

Oh man, it’s a whirlwind. I’d like to say since we’ve been doing it for 6 years we’ve gotten relatively good at it. I’d like to say we’re a seasoned set. But it can really take a toll on you physically, mentally. You don’t sleep a lot. You’re away from home for a really long time. You have to know how to stay physically good. There are tricks of the trade to learn along the way.

Do you all still enjoy it?

Oh yes yes. I thoroughly enjoy touring. When you find yourself on a day off, it’s a Wednesday and you’re in the Redwood Forest and you’re walking around looking for some type of story among the trees you read about on the Internet. You get to thinking, ‘This is pretty rad what we’re doing. To have these experiences and to meet cool people.’ If you have an open heart and open mind while touring it can give back to you in huge awesome ways.

What’s your favorite venue you have played?

There are a few around that are just kind of old places we’ve played a bunch. Like all over great venues, they sound great, they treat you well. Independent San Francisco is always a great time. Our home town venues: The Georgia Theater, The 40 Lot. I’m trying to think of the really weird shows we’ve played like the places where you wonder how we ended up there; not the shows that are going to make or break your career, but the ones that keep things interesting. We played this weird kind of motel, sort of lodge place, a couple hours north of SF. We played for a little while then the place turned into this crazy dance party it was just wild people were wearing animal costumes.

Oh man. Yeah we have an eternal crush on Diarrhea Planet. They’re very good friends of ours. They’re all good looking dudes, all in great shape. This isn’t just because I’m plugging the tour, but we also have a band crush on Susto, and they’re coming out with us to a month of shows. They’re playing the show in LA with us. They’re from Charleston and they’re such a good band. They got this really cool thing going. We’re very excited to be on the road with them for a month. They’re also very good looking dudes too. We’re into touring with eye candy.

To get the latest from Futurebirds head to their Instagram.