Simplicity At Its Finest: A Conversation with Artist Andrew Faris

Digital elements are slowly invading every aspect of previously analog forms and methods of creation, and Wyoming based artist, Andrew Faris, is at the forefront of this minimalist, yet calculated style of art.

Faris’ beautifully colored paintings are the focal point of his captivating photographs, but it’s the paintings’ placement in an equally hypnotizing backdrop that finds us infatuated. Towering mountain ranges, snow-covered streams, sprawling untouched blankets of freshly fallen snow and crisp, clear air all play host to the geometric forms – awfully reminiscent of enlarged pixels – that he paints on canvas. In staging his canvases in these serene locales, Faris’ photographs not only portray the utter beauty of nature, but create an even larger amount of depth and dimension to his layered-on paintings.

Having found himself drawn to photography at a young age, and therefore having always found beauty in the simplest and often overlooked things around us, Faris combines two of his beloved mediums in order to create a style that is not only all his own, but impossible of imitation. It was his move to Jackson, Wyoming that Faris realized a breathtaking landscape can compellingly juxtapose a paintbrush and canvas.

We had the chance to talk with Andrew Faris about artistic reinvention and what it’s like living and creating in Wyoming after having done so for so many years in both Los Angeles and New York.

First off, who is Andrew Faris? Tell me about your artistic beginning. Did you go to art school? What medium did you find yourself originally drawn to?

I got my start early on by drawing on walls, melting crayons, digging in the dirt and looking under rocks. As a kid my parents had a print of ‘The Hallucinogenic Toreador’ by Salvador Dali hanging on the wall. I was fascinated by it. It blew my mind and planted a seed. Growing up my house was always filled with great music, conversations, food and smoke, among other things. It wasn’t a typical midwestern household. My dad was a music journalist and remains a connoisseur; my mom is an artist at heart.

I attended Kent State University in Ohio for Fine Art and Visual Communication Design where I received by my undergraduate and graduate degrees. I have always loved drawing. I think it has to do with the accessibility of it. You can always find a pen or pencil and a scrap of paper to start scribbling. I began college as a Fine Art major, but after about a year and half shifted to graphic design. I was very curious about computers and typography (I also liked the idea of being able to find a job after graduation). I was drawn to the power and simplicity of good design.

What inspires you? Where do you get the bright colors contrasted against these magnificent landscape?

Right now I’m inspired by the return of Spring. The robins, melting ice, thunderstorms and lightning, unexpected snow flurries, wild flowers, ant hills, daydreams of shirtless afternoons and dinners outside, sunshine, bike rides with my young girls, andlaughing with my wife. Inspiration springs from all corners of life for me.

I’ve always been attracted to bright, pure colors. Something happens to me when I see them that sparks a smile and expands my lungs. The interaction of colors can give me butterflies. I initially contrasted my paintings against landscapes for convenience. They are relatively large and I didn’t have a great place to shoot them indoors. Once I took the paintings outside something opened up in me. I saw the painting and the landscape differently. It was exciting to be in nature with a painting. I used to think of a painting as needing to be protected and preserved and kept indoors, as something precious. It was invigorating to go outside and liberate a painting. I love the idea of juxtaposing geometry with nature. Squares do not naturally occur in nature. Me taking my paintings on little adventures with my camera, following the light looking for the place where the painting becomes part of the landscape is now one of my favorite things to do.

You lived in NYC, where you created the New York City Polaroid Project. How did photographing a new, fresh place develop you creatively and visually? Would you ever publish your polaroids into a book?

I have loved photography since I was a kid. I used to take rolls and rolls of photos of what most people would consider insignificant objects or moments, but I have always found beauty in them. Corners of rooms. Overlapping shapes. Lines and light. Once I arrived in NYC my mind was blown. There was so much to look at. There was so much energy and vibrance to the city. I couldn’t take enough pictures. The only thing that stopped me was my limited budget, back then it was about a dollar per Polaroid and I wasn’t making much money as a recent graduate. The camera was also a kind of shield or protector for me in the city. It was a buffer between me and this new and intimidating place. I felt like it gave me permission to explore the city and really look around in a way that I couldn’t without the camera. It allowed me to take things slowly in the fast pace of the city. I find that photography really puts you in the moment. It makes you fully present. It allows me to see and appreciate the beauty that is all around us. Yes, I would like to publish my Polaroids in a book at some point. When I initially shared my Polaroids online I was contacted about doing a book, but it wasn’t something I was ready to do at the time.

Moving from NYC to LA then finding yourself in Jackson is a big change. Did you find yourself creating more while living in places like NYC and LA where there is larger art community? How has that changed since moving to Wyoming?

Yes, it has been a big change going from east coast to west coast to the mountains. On the coasts I was primarily focused on graphic design, doing websites and mobile apps. Working in design studios on client work under deadline can be taxing. Opening my own design studio in LA and doing those same things was even more demanding. I did client driven design work for about 15 years. Being in those big cities working with large clients had an excitement to it and regardless of my level involvement/engagement in those art communities I always felt connected to them simply by proximity. The move to Jackson Hole really shifted my focus. It was a chance for a bit of reinvention. Now I’m primarily painting. I’m not answering to clients. I have to be completely self-motivated. There isn’t the same art community and creative energy out here, but I have found through Instagram and other social media outlets that I can be connected to an even larger art community that is not bound by geography. When I initially went to NYC I was working with a well-known designer named Hillman Curtis. He is no longer with us, but he remains a big influence and inspiration for me. He reinvented himself creatively several times, going from musician to designer to filmmaker. Seeing him do that successfully reminds me that with passion reinvention is possible. I feel like I’m in the midsts of that right now.

How long have you lived in Jackson? How has that impacted or helped develop your style?

I have been out in Jackson for about 16 months and I have really only been focused on my painting for the last six months. Since this is something new for me I don’t know if I can say how Jackson has impacted my style yet. I feel like it is just starting to blossom. I’m excited to see how my style and approach evolve as I’m in the mountains.

Your work is simplistically set against beautiful landscapes that not many artists work with visually. Have you always been attracted to this more simplistic style of art?

I have always been attracted to simplicity. It is something that powers me. It is something that I am always striving for. Simplicity goes very deep for me. It affects me in ways that I would not call simple. The word simple means, easy to understand, not complicated, that is different than simplicity, which I find requires much thought and effort. Simplicity is an ideal that I aim for in all areas of my life.

Here are a few words about simplicity that resonate with me:

“Simplicity is the glory of expression.” ~ Walt Whitman

“Truth is ever to be found in the simplicity, and not in the multiplicity and confusion of things.” ~ Isaac Newton

Tell me about a typical day in your studio. Are you listening to music, being inspired from your surroundings, etc.?

A day in my studio…

Well, as I now find myself in the much colder climate of Jackson, compared to that of Southern California, I have for the first time in my life taken to drinking coffee. I like it black. So, first thing in the morning when I enter the studio I grind my coffee beans and begin my brew for the day. Next, I make my way to my desk, which is kind of the heart of the studio. Here I turn the computer on and check my email, the latest news in the NBA and occasionally play a game of chess while I wait for my coffee. There is almost always music playing. Music is essential for me. I somewhat recently got into vinyl as well as Spotify, and between the two I have all the music I need. Once the coffee is ready I start looking over my painting sketches, which I do on the computer. The computer is such a powerful tool for me. Since I have been using the computer for so long for my graphic design work, it was natural for me to continue using it for my paintings. At this point the computer is an extension of my mind. I am able to explore so many ideas and variations on it. Much more than I can do on paper. But, the computer cannot compare to the experience of actually creating a painting. Once I have settled on a design I will begin the process of painting it. Throughout the day I’ll take little breaks. I’ll go outside, stretch, play with my two girls. I try to let things unfold naturally. I am in perpetual awe of my surroundings and the mountains, sky, wind, wildlife all inspire me 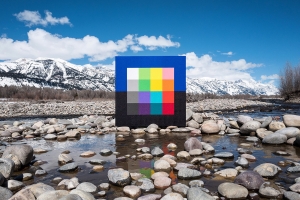 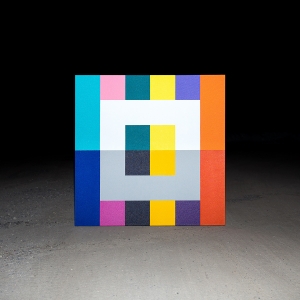 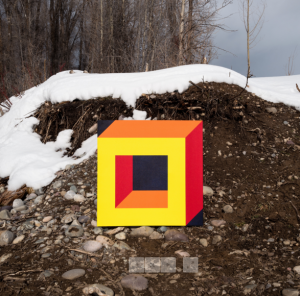 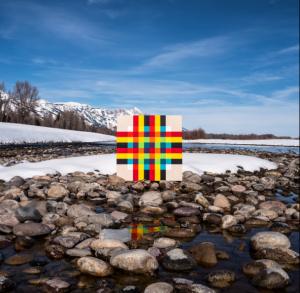 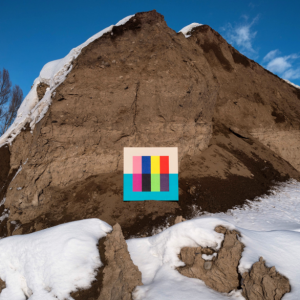 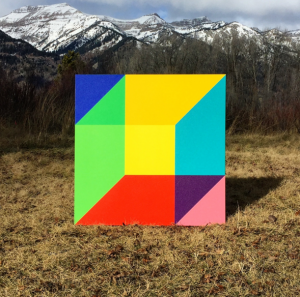 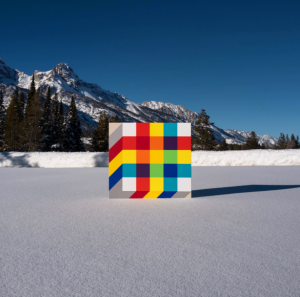