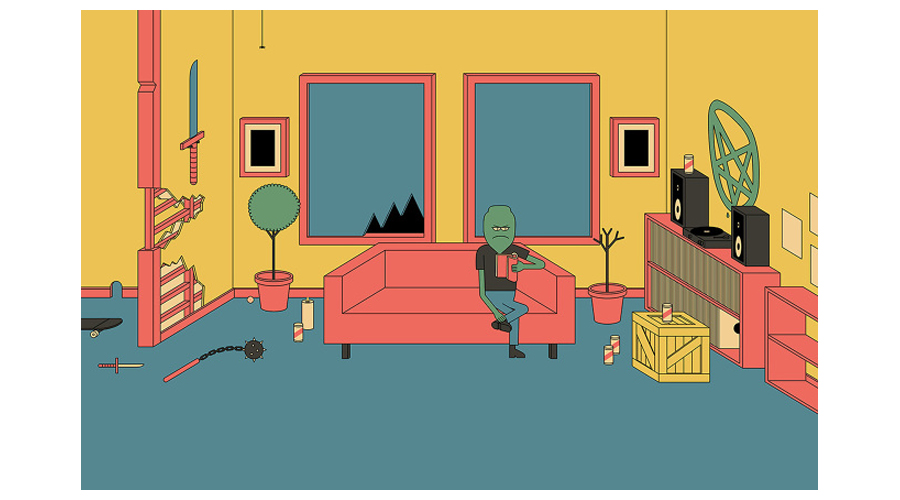 Schubert first introduced himself with a band of angry green miscreants: Blobby Boys. The initial self-published zine sold nearly 1,500 copies, proving a demand for the slimy gang and initiating Schubert’s handle: Zine Police. From there he gave us other personas such as Fashion Cat and The Dudes, all of whom are available in weekly doses in Schubert’s Vice installment, The Blobby Boys & Friends.

A natural observer, Schubert has fun with his subject matter, tempting all emotions, from remorse to teary-eyed delight, with strips like “Am I Basic” and “Owen Wilson Sells Blood For Ramen Money.” He makes you think, he makes you laugh, and he makes you remember the please-don’t-die artistry of comics.

Tell me a little bit about yourself and your artistic background.

I’m from a small farming community in Illinois, called Mascoutah. My mom was the advertising director of the newspaper. When I would visit her at work, I would always bug the editorial cartoonist, Glenn McCoy. Seeing him drawing as a way of making a living made it seem possible.

Did you study illustration in college?

No, I studied Printmaking. I had a teacher who said, “If you want to do illustration, you should go into Printmaking, because the illustrations will have to be printed.” Which kind of makes sense?

Newspaper comics are not receiving the attention they used to. With television, iPads and everything else, people are paying less attention to a once-loved form of entertainment. What are your thoughts?

I can see that it’s changing, but comics will never go away. You see people like Lauren Monger building huge audiences.

How do you feel about this medium of art? What influenced you to start creating comics?

How do I feel about comics? It’s a deep question. I think when I was a kid, I was just really into drawing, and if you got a comic book, it came with like 100 little drawings. When I was in art school I tired other things. I remember thinking, “Anything but comics.” I can’t help it.

Talk to me about your comics, Blobby Boys, The Dudes and Fashion Cat. Which was the first you put together? What was it like translating Blobby Boys into an actual comic book?

I drew The Dudes first, and it took me years to finish it, because I had no idea what I was doing. There’s a ton of specific techniques that are involved in drawing comics. For example, the lettering has to be done with this little plastic tool called an Ames Lettering Guide. And because I was living in the middle of nowhere, I couldn’t ask anyone how it was done. I just had to figure it out.

After I finished that, I printed 50, but they really got around. Then Jordan Crane put it on his website What Things Do, so it was widely available. After that, I drew the first Blobby Boys zine, which was huge. I sold like 1,500, which is nuts for a self-published zine. I didn’t have a distributor or anything; you had to buy it from my website. Then Nick Gazin from VICE magazine saw it, and I’ve been drawing comics for VICE ever since. Nick told me that he would make me famous, and he basically did.

After the first Blobby Boys book came out from Koyama Press, I wanted to do something totally different, so I started drawing Fashion Cat. Although the characters are different, I can see that they share a similar, mean vibe.

Tell me about your collaborations. You have designed album art for Drinking Flowers, what was this artistic process like? Had you ever worked with creating album art before?

I’ve done stuff like that before. I just did a poster and some video pieces for Bully. Bully is really good!

With that Drinking Flowers project, the lead singer sent me several long e-mails about the meaning behind each of his songs. They wanted little cartoon characters that would be in the “international pop underground.” And I was like, “OK, cool.”

I know you have a short cartoon created for Blobby Boys. Do you want your comics to eventually translate all your comic ideas into a cartoon series? Would that be your next step, and how difficult is that transition?

Yeah, I want to make a Blobby Boys TV show. Several studios wanted to do it. I picked one, and they’re really into it, but it’s still tough to get it through production and to sell it to a network. The Blobby Boys show has music, scripts, and some cast members, but it’s hard to say what’s going to happen. Cross your fingers.

You also wrote, directed and animated a short that aired on FOX-TV. What was that experience like?

The short I did with FOX ADHD, Killer Driller, was the first time I ever worked with a big team. That was tough, because some things in my drawings didn’t translate into animation. I was also directing it from Kansas City, and everyone else was in LA. The producer, Charley Damski, did a really good job with the actors and the music. He basically had to teach me how to write a script.

Also, S&P took out about 30 seconds. The original version was way dirtier; the boyfriend characters had funny lines, but it all got cut.

What is your favorite thing to draw?

It used to be bricks, but now it’s spit. I don’t know what happened.

My favorite comic is John Porcellino’s Perfect Example. It’s not only my favorite comic, it’s my favorite work of art in any medium ever. I also really like A Farewell to Arms and The Duke in His Domain, but they aren’t even close.

What is next for Alex Schubert? Any new comics in the works?

Blobby Boys 2 just came out from Koyama Press. There’s a big book of all my comics that just came out in French from Misma. I’m doing a line of skateboards for Chop House. Paramount literally called me in for a meeting about a 60 million dollar movie based on Nickelodeon’s Doug. Ben Jones had me designing all of Target’s back-to-school TV commercials, but we both got fired. Ha ha.

Check out Alex Schubert’s work on Tumblr and Instagram. 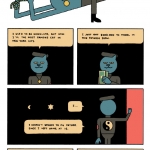 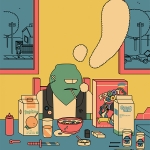 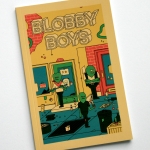 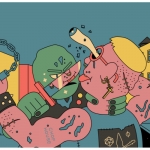 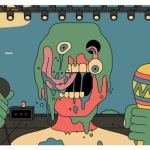 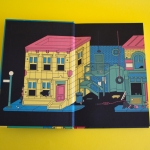 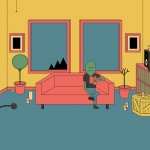 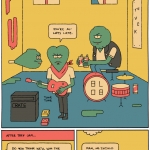 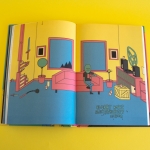 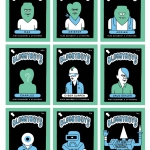