Boston-bred painter Eben Haines creates monumental works on canvas primarily exploring the human body through his figurative paintings that distort, inflate and deconstruct physical forms in order to reveal emotional situations and narratives. Haines executes his surrealist vision with loose brush strokes that leave details muddled and backgrounds incomplete, inviting the open-ended images to mingle with the viewers’ own thoughts and assumptions. His subjects are less an image of a specific person, and more an idea or feeling; a person’s face, positioning or action as the catalyst.

Flesh takes a leading role in most of Haines’ pieces, though not always in the most expected ways. In some works, it’s the bright blue forehead and cheeks of the subject that command attention. In others, the artist focuses on the nude body of a man standing, and slightly leaning backwards. Things get more vivid and unsettling in compositions where the flesh is smoothed and speckled with red as if bloody. It’s hard to tell whether the subjects feel trapped in their flesh or strangely liberated by its inescapable existence. With each scene — made even more intense with careful shading — the story remains unclear but the question of human activity stays pertinent.

Setting soft and supple nudes and unorthodox portraits against seemingly textured backgrounds, Haines utilizes the tension between abstraction and realism to appease his own inner dichotomies and create art that expresses emotional complexities. But unlike many artists who muddle the polarities of figuration and abstraction into ambiguity, Haines leaves them distinct, engendering a contrast that intensifies the impact of each.

Briefly give us the Eben Haines spiel. Who are you? Where are you from? What’s your favorite body part?

I’m a 24 year old, Boston-born artist, graduated from MassArt in 2013, and living and working in Jamaica Plain. I make oil paintings and mixed media drawings. I guess my favorite body part would be the collar bones. They usually have a pretty good play of light on them. They’re one of the few bones in your skeleton that are unnecessary, but they’re also pretty structural. I broke one of my collar bones a few years ago, it still has a weird bend to it.

It seems like the human figure is something that always returns or acts as a starting point in your pieces. What about the human form intrigues you most?

I was always afraid of the human form, from a drawing standpoint. I was terrible at it. But when I was an illustration major, obviously you have to draw people, and so I had to get better at it, and it kind of stuck with me after that. I guess what I find intriguing about the human form is the range and possibility. One rabbit looks largely similar to another rabbit, but humans have so much differentiation. Because we’re so used to seeing human form, and the figure is so instinctively ingrained, we instantly recognize deformity or normality.

Lately, my figures are being deformed by my working process, some parts being covered or obscured, a sort of abnormality by abstraction. Making images of people feels so self-involved – the act of exemplifying ourselves in a form where only people are the beneficiaries – sort of an altar to ourselves. It is a sweet hubris, which is obviously exciting, if not a little perverse.
Has your artwork always been portrait-centered? When did you start doing a lot of portraits? What attracted you to this style?

If figures were scary for me, then faces were terrifying. I guess my work comes from an attempt to overcome my own difficulties with art, because for me the most exciting aspects of art were the things I couldn’t do. My junior year at MassArt I became obsessed with the Dutch Masters, and started doing portraits in earnest. Now I don’t really like to call them that because I don’t really feel like they’re portraits in a typical sense. They are less an image of a specific person, and more an idea or feeling, with a person’s face as the catalyst. Again the human face is such a recognizable structure, which is why its so exciting to alter or subvert it. As humans, we instinctively see faces in anything static (think about Rorschach tests, clouds, the moon, etc.) and most of the time, slight deformity in these can easily be ignored. But when alteration becomes deliberate, it can be really frightening, and exciting. It forces us to think about how form is so integral to our daily experience.

What external influences, do you think, have helped you in developing your overall aesthetic?

Well there are a lot of artists obviously, like Jenny Saville, Euan Uglow, Michael Borremans, De Kooning, Alex Kanevsky, Dutch Masters like Rembrandt and Hals, to name a few.

Your style is so fluid and loose, but each piece has such amazing texture and detail, how do you capture the individual character of each of your subjects without being overly realistic?

Really careful drawing and impatient painting. I always try to nail down a pretty perfect line drawing before I start, that way I only really have to think about color and light and the direction of my strokes, which frees me up a lot. I also try to get the nitty bits out of the way first, like eyes and ears, the really necessary human aspects, so that I can loosen up with the rest.

What’s the intrigue with people eating?

Eating is such a weird thing. Its a basic animal necessity, but we fetishize it to a degree far beyond that, forcing culture into eating in order to humanize the act. Socially, its impolite to be the only one eating, its weird to eat alone in public, basically eating is shameful and we don’t want to be seen doing it unless there is someone else embarrassing themselves as well. Those paintings were made to sort of deny that embarrassment, or in the very least force the viewer to be voyeur, spying on these people while they unknowingly break social norms.

I don’t know if there’s any way to really quantify that. For me, a drawing is always going to come out as a drawing, and vice versa. I don’t know if I could translate a drawing into a painting. I guess generally my drawings are more figure than face, but I’m trying to push that in my painting as well.

Oils, graphite, acrylic, beeswax. I use acrylic with my drawings because oils don’t always react the way I want with the beeswax, and the whites tend to be contaminated by graphite and charcoal even with fixative. I’ve more recently been experimenting with building floorboard patterns out of wood and drawing on plaster or tracing paper on top of those.

Give us a verbal tour of your workspace. Music playing? Painting piled up? Food involved?

I usually listen to NPR or old episodes of This American Life. I used to listen music, but sometimes that stresses me out or puts me in the wrong mood for work; talk radio seems to be a good motivator for whatever reason. There’s a desk covered in splinters of wood and piles of paper from building these new assemblages; another table has a big glass palette and my paints. One wall is covered in homasote so I can pin things up, with a few half finished paintings and bundles of canvas leaning against it. In front of that is a big easel. The rest of the room has more stacks of paintings, a storage cabinet, a big amp and a guitar. Its a lot messier than I like right now because I’m putting together a bunch of little pieces for a show.

For more from Eben Haines check out his website: www.ebenhaines.com. 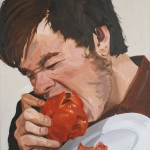 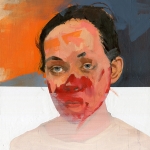 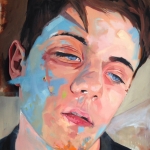 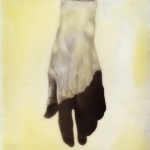 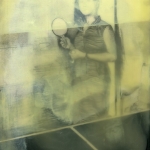 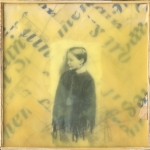 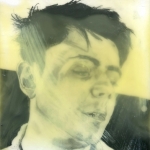 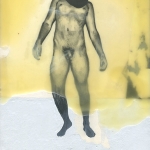