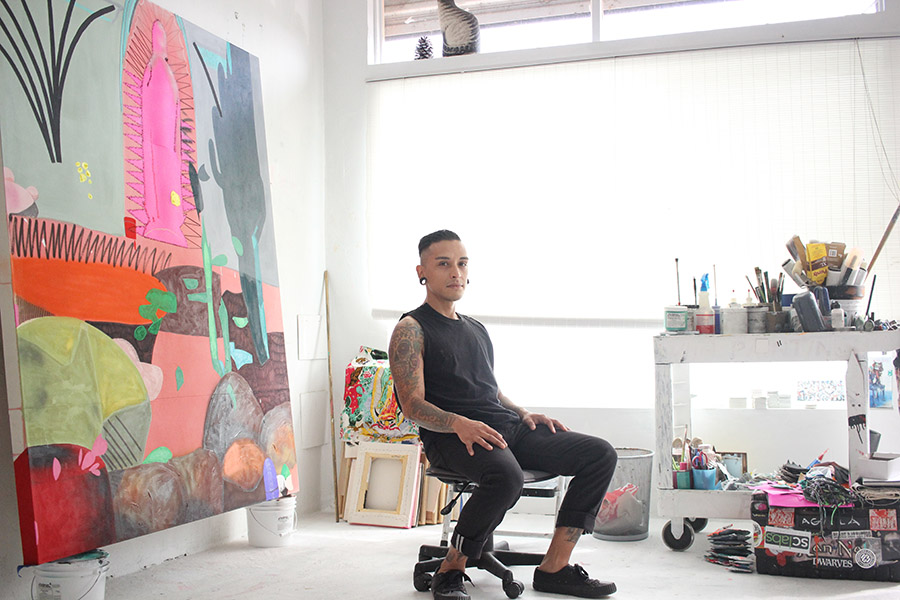 Gabriel Luis Powers used to perform as a circus clown. The New Mexico native moved to Texas to make music and DJ in the mid 90s, where he inadvertently fell into playing music for circus performers. In making music for these small-time performers he started to take to the community and lifestyle and started traveling with the circus, eventually becoming one of its comedic acts. His routines usually consisted of silent, physical comedy and theatrical acrobatics, but in a circus community, each participant inevitably becomes a jack-of-all-trades.

By the time Powers left the circus in 2006, he had become adept in making costumes, backdrops, and builds for set design, inevitably translating these techniques and skills into his personal artwork as he began to search for an alternative creative outlet with a more solitary practice.

Now, Powers is a mixed media artist living and working in Los Angeles, creating large-scale paintings with woven fabric elements that are alive with color and inherently tactile. Created using a mixture of acrylic, a range of found fabrics and elements he finds around the city, as well as traditional patchwork techniques Powers’ works cry out to be touched, bursting from their wall fixtures out into space. While a majority of his pieces stand as bold and abstract compositions on canvas, Powers finds himself returning to assembling immense shrines that are motivated by ritual and a sense of spirituality.

We stopped by Powers’ studio in mid-city LA, where we talked about building shrines, the positives, and negatives of graduate art school, and combining a range of techniques for a piece.

First, tell me about your upbringing. I know you were doing a lot of graffiti as a kid.

Yeah, I started doing graffiti as a kid. That seems like so long ago now (laughs). I also started DJing at the time.

Those always seem to go hand in hand.

Yeah, I guess so, especially in the early to mid 90’s. The whole culture of breakdancing, graffiti artists, even the punks, I kind of became all of those things at once. Graffiti and train hopping…and then it started moving towards making more music with friends. I moved to Texas to make music and DJ, and I guess that’s when I started doing more performance art. I started working for different circuses playing music for them, and that moved into actually performing doing acrobalance and trapeze and fire…In making music for these small-time music performers I really took to that and started traveling with them and kind of became a circus clown. I worked silently mostly—it was a lot of physical comedy, physical theater, and acrobatics, all the way up to trapeze. I was kind of told when I started working for these people that “well, you can’t just play music for us.” They saw that I’d get up and do yoga and they were like “you’re flexible, you could do more…”

You’ve got to be a jack-of-all-trades.

Yeah. I did that for a long time. Until about 2006. I was getting out of doing 2D work, and only doing work for myself. I was always doing collaborative projects—making costumes and backdrops, building things, temples and shrines and all kinds of stuff.

I got out of all that circus performance stuff and music making and I wanted a more solitary practice. So I decided to go to school. I knew it’d be easier and cheaper to go back to New Mexico, so that’s where I went. I was building shrines and painting them, doing responsive shrines to things that would affect me in the city or wherever I’d be. I’d make on the spot shrines—set them up and paint them or draw them if I could, If I couldn’t I’d take a picture so I could paint later. I guess eventually it started moving away from shrine building and working with figurative and representational things and rolled into more…straight abstraction. Kind of similar aspects and sensibilities. Formalism…just putting things together until they look good.

I love that all of your pieces are really big.

In grad school, I was encouraged to go small and do different things…that was cool, but I’m back to doing big stuff, and I’m building shrines again.

[The shrine building] was something that was beat down in grad school…they’d say the shrines I’d built out at burning man weren’t ‘fine art’. They’d say “We don’t care about the representational aspect, nobody cares about where it comes from…people want to be able to enter them in their own way.”

So you’ll actually build out a shrine and then put it up on canvas.

Tell me a little bit about your process for building these shrines.

They change constantly. I think when I started building shrines they were very eclectic and chaotic, and responsive, so they were kind of being cheeky in a way where they were speaking to the environment. But nowadays, they are motivated by ritual and a sense of spirituality. They can be dedicated to all kinds of different things. They are kind of specific now. They can be about specific deities or energies.

So I see a Guadalupe-looking figure over there on that canvas…what other deities have you been injecting into your shrines?

Sheba comes up a lot. They come from moments. These (points to a piece still in progress) are pseudo-promesas to the Virgen we made. They definitely have to come from somewhere for me. As far as how that translates…whatever, I don’t care [laughs]. What’s important to me is that now the works seem to have a little more intention behind them. It makes for a richer and deeper image for me, especially if there are clues but no answers. So you’re like “what’s going on here!” but you don’t need to know.

You work with so many different materials. When did that start?

Coming from graffiti all the way into undergrad, I was painting pretty flat. Then halfway through grad school, I went to visit my mother and father in the summer in New Mexico. I grew up doing a lot of crafts with my mother—she’s a floral and costume designer. We’d make costumes together. I’d make all my Halloween costumes with her. She’d lay out costumes for me and have me sew them. I took all the fabric and craft supplies I’d left at my parent’s house and boxed them up and mailed them to myself in Claremont and started trying to figure out how I was going to get them onto canvas. It was very intense and rough in the beginning.

Is it hard for you to go small?

Lately, it is. I think over the summer I was doing a lot of small work…that’s when I was in Denver. The small pieces have gotten me into a lot of group shows. But now going back into the shrine building…I like them to be life size. I want it to feel like you’re part of them. That’s what it’s all about for me in painting. Even in the beginning with graffiti, I was painting trains. It was big, it moved, and it almost swallowed you…It was just fun. Maybe it’s partly little man’s complex [laughs].

When I think of shrines in Mexico of the Virgen, they are big and extravagant and colorful, and so it makes sense to me, it has to be big.

I want it to feel like it’s sitting there with you. You’re experiencing it, not just looking at it.

The shrine pieces are a little bit more straightforward. They’re representative of the deity. But tell me about your abstract work…Does it come from the same place?

Sometimes. This specific piece here was produced like a sigil of sorts. I was trying to pump a lot of the current experiences and energies I was feeling into it and work it out on canvas. Peace and resolution from all the things I was going through. I knew that the answer would happen here on the canvas in the end. But also, it’s a formal object—I want it to look good. I go as far as I need to, I add everything I want for me personally, and then sometimes things come in that I’m like, “This will just look good here, I need some red here, there needs to be something…”.

Do you think you’ve learned how to gauge that through going to school?

For sure. Bottom line, I want them to look good. I want people to like them because they look good. I don’t expect them to get a deep feeling. I’m not trying to go there. But it’s important for me to have the connection to them. So this piece (points to one in his studio) was towards the end of summer and is pure abstraction. I just wanted to make something visually that people would gravitate towards. And sometimes people like that more because they don’t have to get hung up on “what does this mean…”

What other ways do you think school has affected your process? What is positive or negative?

[Laughs] I think lately I’ve learned how to recognize the positives. Grad school was very difficult for me. Coming out, I felt very negatively. I definitely wasn’t ready for it. The past year was just working to get those grad school voices out of my head. To focus on what I wanted to make and not what I was being influenced to make. Some of it definitely came more from my heart and my gut and wasn’t me thinking “What will people like, what am I supposed to do?” I tell people now, especially younger people who ask me about it, I think grad school gets pushed on so many people especially with painting and art. I don’t think it’s for everyone. I have a lot of friends right now—my wife included—they’re not going to go to grad school, and they’re being perfectly successful without it. And there are ways around it. You just have to have people who are willing to help you and be honest with you and tell you how the art world is kind of screwed up. There’s no M.O., no one’s going to tell you how to do it.

There’s no rubric for success in the art world.

No! With a little help, and really just perseverance. If you want to do this, you’re going to do it. You don’t need academia period, or grad school to help you. But it does, in a way…I don’t think I would have come to this point without it. As much as I can discount it, I understand what I got from it because I myself couldn’t have done this without it. I see how other people have done it, but I could never have figured that shit out.

You kind of needed a little guidance.

As frustrated as it made me…Yeah, I did need it. I think the city did that too. 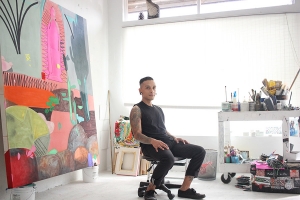 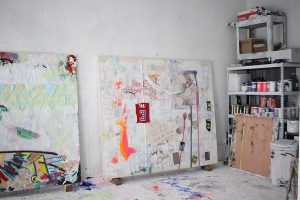 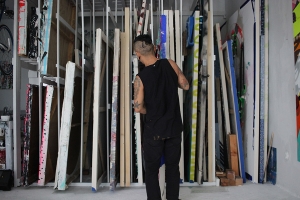 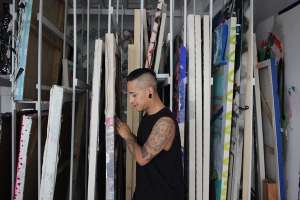 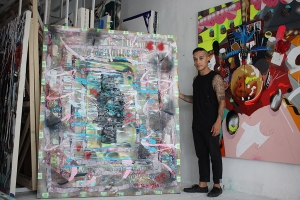 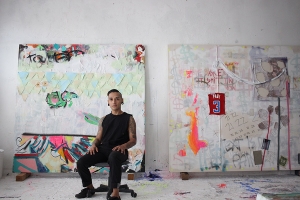 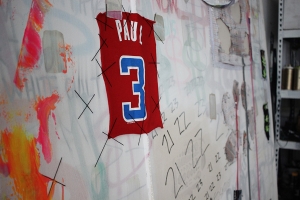 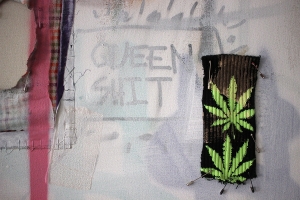 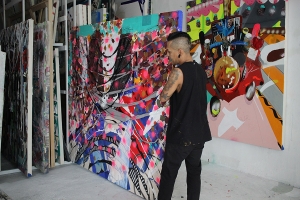 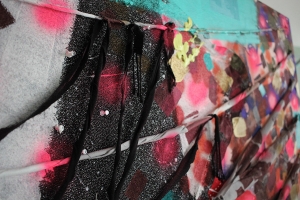 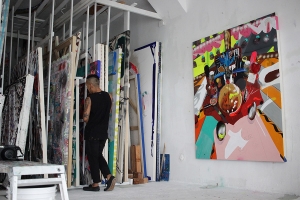 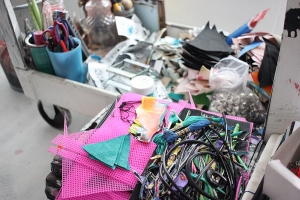 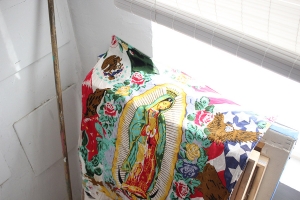