This is a preview of our feature on Molly in upcoming issue 19, out March 28th. Available for preorder here.

Sometimes words just don’t cut it. For interdisciplinary scholar and visual artist Molly Greene, this realization came during the final years of her graduate school tenure. Greene had already achieved three Master’s degrees, exploring everything from environmental and animal studies to philosophy and gender/sexuality studies to technology studies and posthumanism. And after several years of writing and chasing texts and ideas that resonated with the larger questions she had, it became clear that painting and drawing were ways of thinking and theorizing about ideas that were impossible to articulate with language.

Greene investigates dense subjects in her beautifully airbrushed and hand-painted pieces that most often depict braided brown hair intertwined and existing alongside lush, green plant leaves, or nonsymmetrical shapes covered in a layer of fur-like hair follicles. She depicts distortions of an individual form—plants and hair behaving or interacting in atypical ways—as to not only explore the notions of natural, unnatural, and supernatural and how things get categorized across the three, but to also specifically unravel the hierarchies that have been set in place to make these distinctions. Greene isn’t interested in merely illustrating theory, but rather, making visual work as a means of communicating and questioning these notions of naturalness. 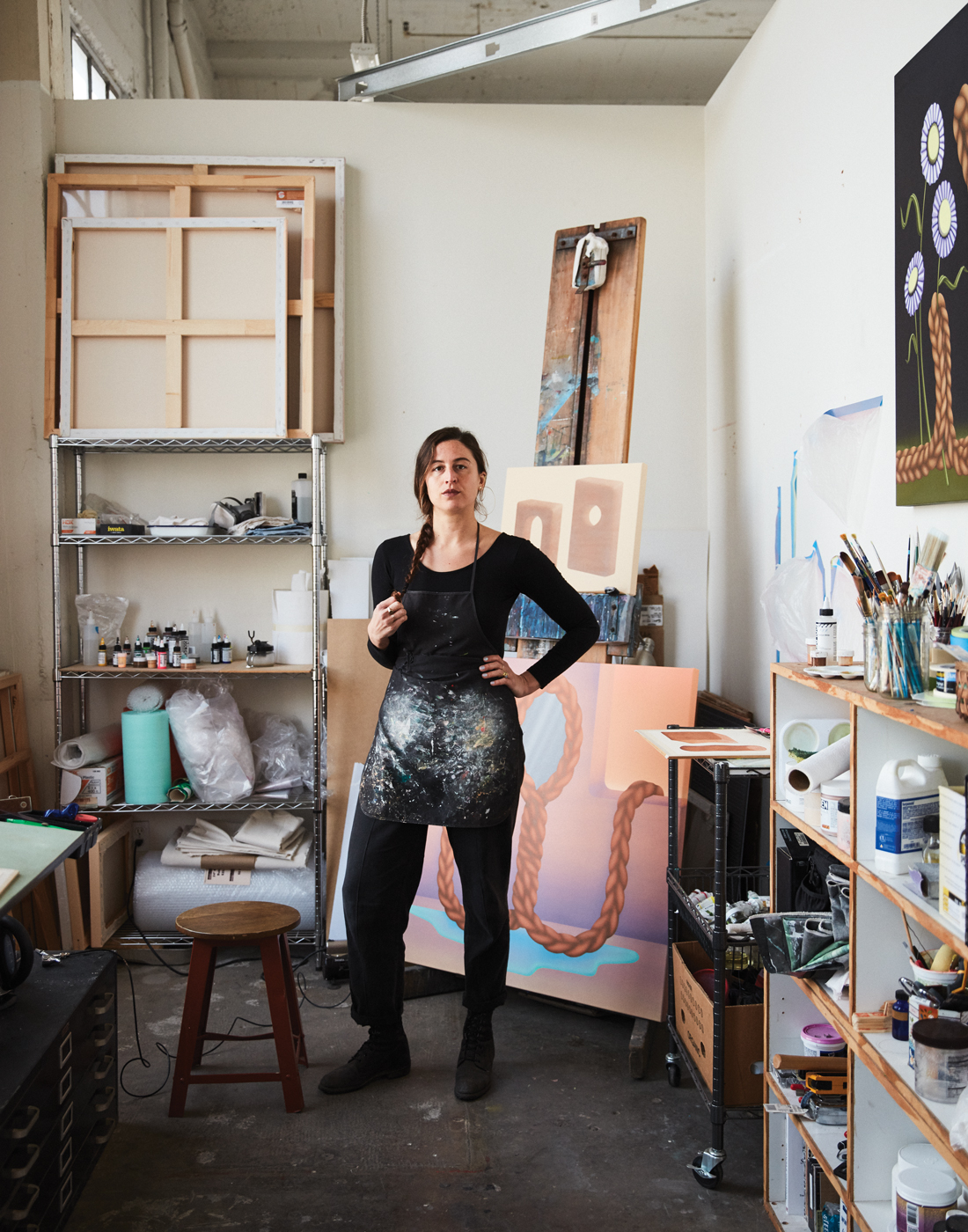 Why are hair and plants so prominent in the work?

The hair is kind of a way of representing myself and partly a way of thinking about gender and naturalness and artificiality in the abstract. I’ve never wanted to represent myself in a more literal way, I kind of have a deep repulsion to that. But hair feels one step removed; it’s a subject and an object and I experience the world in both of those ways. It’s sort of me, but it’s not me, so I can work with it and think about myself in the world and also about the broader categories that I fall into.

I’ve started to make some fur things and I’m interested in using that to think about animals. I’m interested in conceptions of humans-as-animals and also in the ways humans have partitioned themselves off from animals, theoretically and literally. Like with the hair and plants, I’m also interested in the way that ideas about the mechanical or the artificial or the unnatural are used to triangulate definitions of both the human and the animal. It all feels really dense but also malleable. 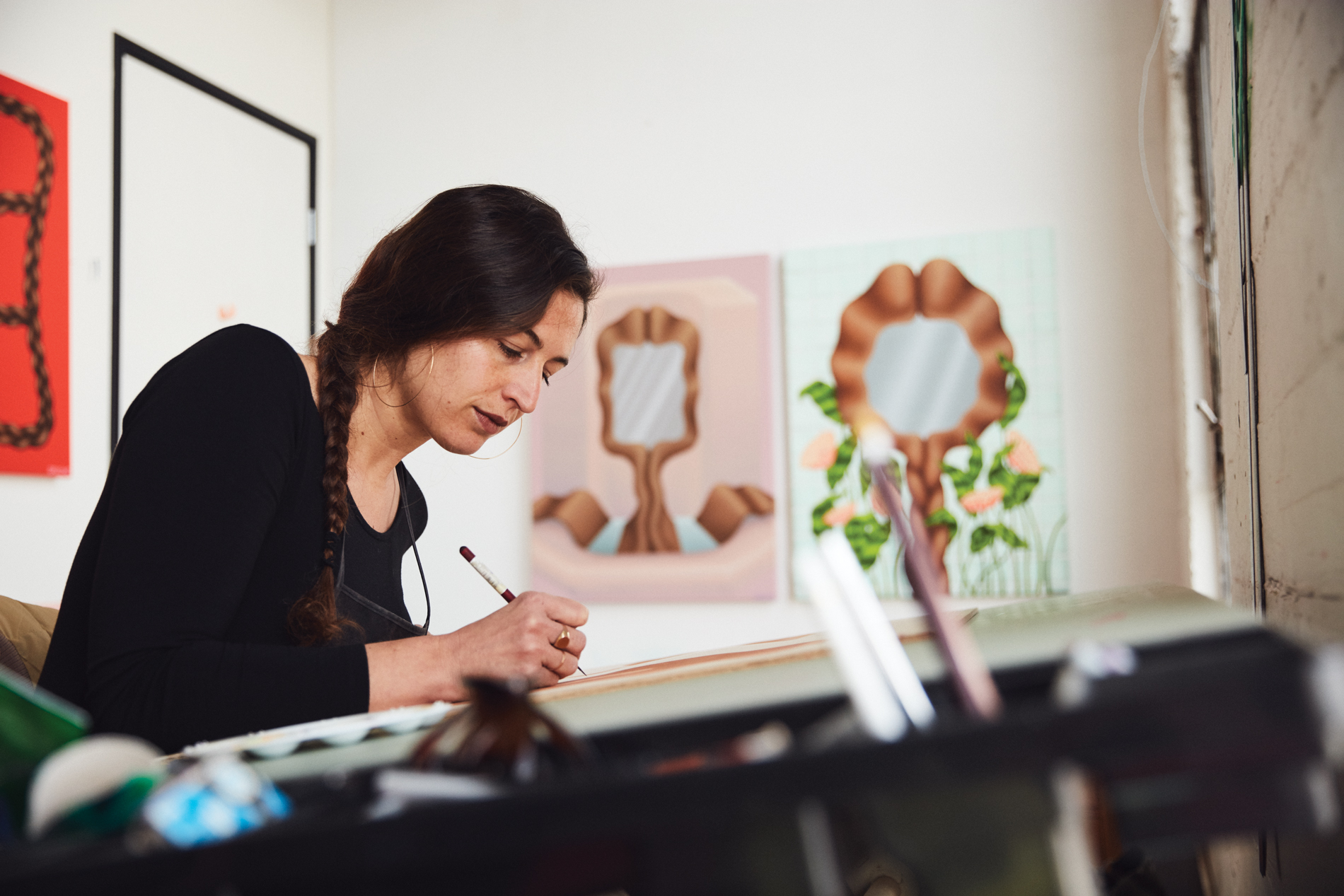 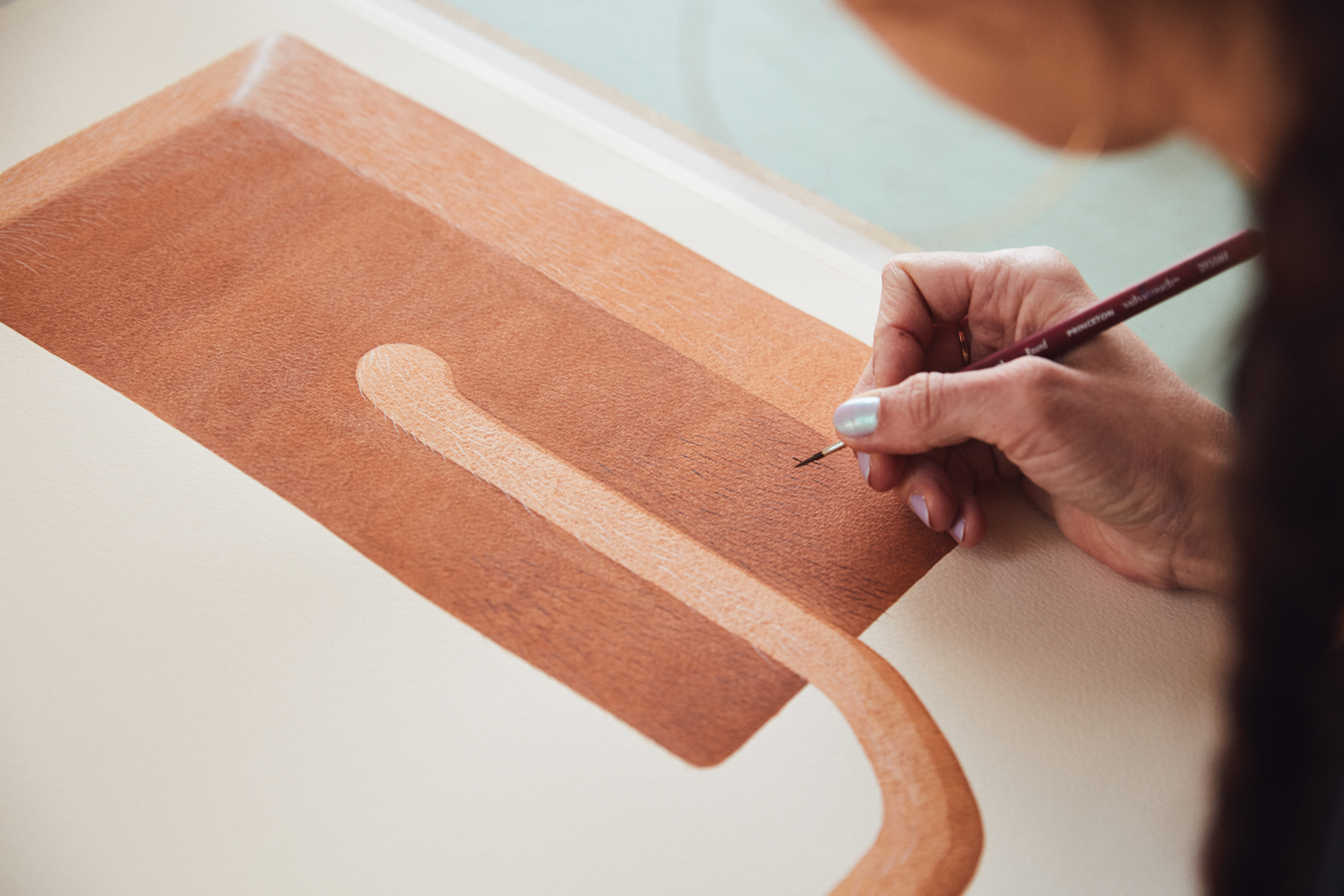 I like what you said about connecting with hair because everyone has it. But when you take it and put it on the canvas in an unfamiliar situation, it becomes something else.

Yeah, I think the initial impulse to work with it was when I was thinking about the way we define the other, which is through the unfamiliar. I was interested in taking the most familiar material in my life and making it strange, more as an experiment for myself—can I make myself strange? I was curious about the kind of images that would come out of that. I think with a pet most people recognize there is a deep intimacy and a deep alienness to that animal. I’m interested in both the closeness and the distance.

How does your academic work interject itself in your artwork?

Even though I was in denial about wanting to be an artist for a long time, I was always going after texts and ideas that resonated with the larger questions I had. So I think I’ve been building some kind of armature or foundation or terrain with all the philosophy and theory and that helps me make visual work now. I think I’m really inspired by certain theoretical texts, so even though I didn’t plan it this way, I think the two parts nourish each other. I also feel like all the academic work that I did helped to politically ground me and give me some kind of sense of what the stakes are and where my investments lie, and that still feels important. 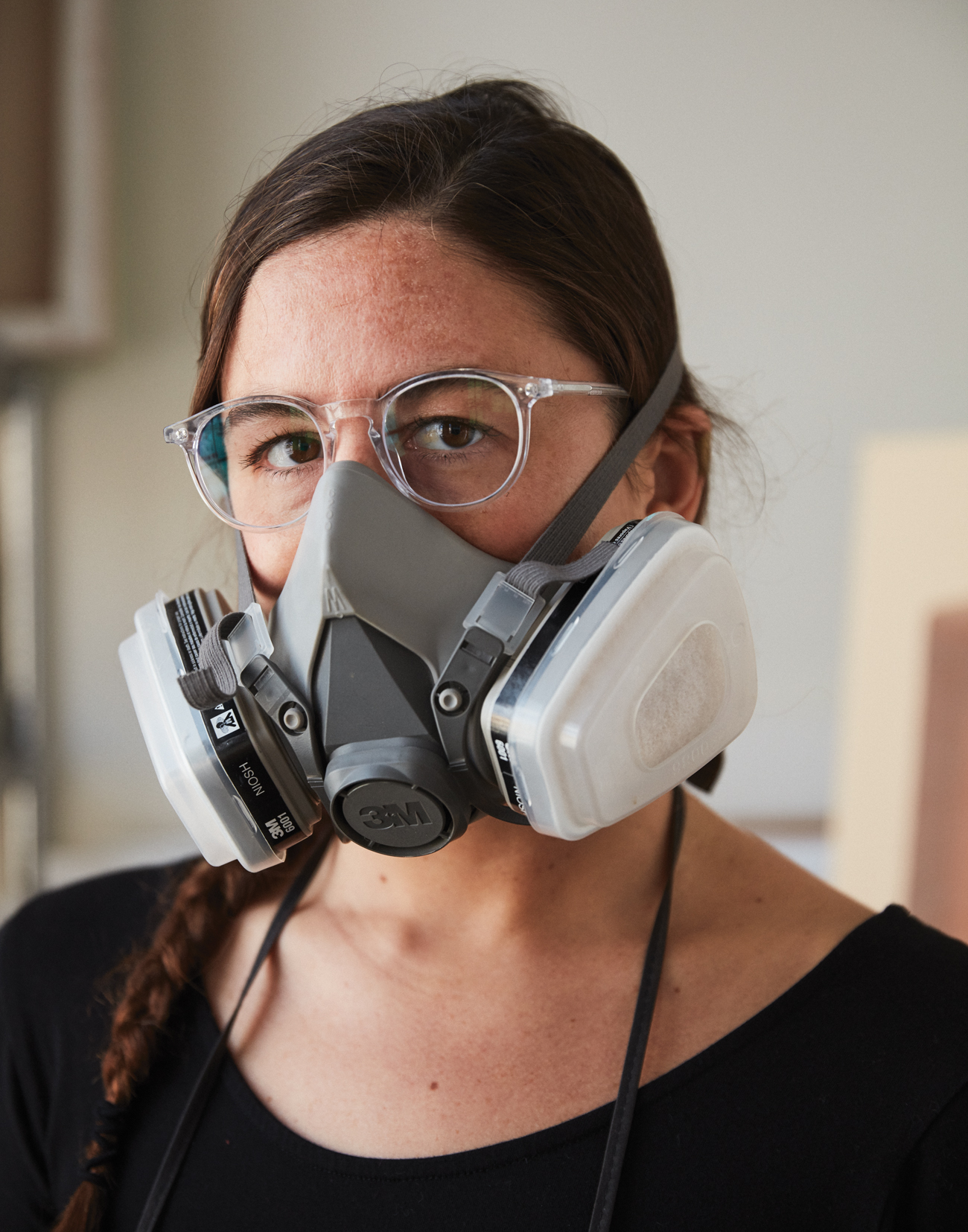 I understand that you’re really into science fiction. Do you see any similarities between the science fiction subjects that you read about, or are interested in, and the things you’re creating?

I am mostly interested in what I think of as posthumanist science fiction. There are a lot of definitions of posthumanism, but I’m most into work that questions traditional definitions of the human, like humans defined as rational, autonomous, having consciousness, etc. I’m drawn to science fiction that expands or reframes what constitutes personhood or plays out scenarios in which people think differently about possible ways of being in the world. In my work, and just as a person, I’m committed to the broader project of extending moral consideration to non-humans and I think science fiction is a way of thinking through the philosophical shift that would need to take place for people to feel affinity and responsibility for beings that are radically different than themselves. The science fiction I’m most interested in re-forms the idea of who or what can be a protagonist I guess. I’m definitely not into all science fiction. In terms of my own work, I hope that I’m starting to play in that space between conventional ideas of what a human should be and what a human could be.