Saara Untracht-Oakner’s “Subjectively Speaking” Focuses on What the Artist Does Best; Flipping Day-to-Day Life Inside Out

Saara Untracht-Oakner, Brooklyn-native, and co-creator of the boundary-pushing, rock trio BOYTOY, is an artist that just can’t seem to sit still. Untracht-Oakner is always creating, moving swiftly from one medium to the next. Whether it’s design, fronting her band, writing, painting, or photography (I think that’s all of them…), her appetite for art seems to insatiable. The multi-media artist is known for turning mundane life upon its head to make for thought-provoking and satirical pieces of work. Over the past few years, while fronting her band, Untracht-Oakner has also found time to not only work on art but to be apart of surrealist exhibits as well. The artist specializes in letting audiences get involved with the art where they can truly immerse themselves like “KITSCHIN” at Gallery Petite in New York for example. It was a well-received interactive installation “where 90s cartoons meet IKEA sensibility.”

Now we find Untracht-Oakner as the head of another exhibit, “Subjectively Speaking,” featuring live performances from artists and musicians from the LA area. The exhibit focuses on what the artist does best; flipping day-to-day life inside out. The exhibit tunes into “fake news” having less to do with politics and more to do with our own personal human interpretations like the way we relay messages to one another by word of mouth. It’s never quite the same message we were given in the first place. Since the exhibit is coming from the mind of Saara Untracht-Oakner, goers are guaranteed a stimulating experience full of performances, music, and humor. I had the chance to talk to the intimidatingly talented artist about the gallery, her sense of humor, and how “we all make our own truths.”

I hesitate to ask you to explain your exhibit since it focuses so much on interpretation, but can you explain the idea behind the project and talk a little bit about the artists involved?

I’ve had this idea for a while.  Maybe it started some years ago, my friend Christian was running this anarchist college called Corvid College and he did one class where we smoked a bunch of weed and turned a room into a sort of sensory deprivation environment with blacked out windows and listened to Beethoven’s symphonies.  I thought a lot about synesthesia but also what musical language looks like as an abstract idea. How language and storytelling can cross mediums and ways we interpret and then reinterpret information. I got all these visuals when listening to these pieces of music that I could trace and chase in my head.  You’re listening with your ears but then your brain organizes that information so that it somehow makes sense to you. I started drawing these visual “maps” or “scores” of the music I was seeing and hearing, and then expanded on that. Like, “Ok now this is what I’m getting from this, what are you getting?” I will draw what I hear in a way that I see it, and have performers “read” what I have made to then tell their own interpretation.

I pitched the idea to Alex Knost who I’ve known through the music scene and he and his partner Daniella Murphy thought it would be a good fit at Costa Mesa Conceptual Art Center. Alex has such a good eye and style and can definitely get experimental so I for sure wanted him to perform. Verge Bliss is a noise musician based out of LA. I’m excited to hear something so structured potentially become sonic chaos. Verge Bliss was recommended to me by Jake Falby, who will be composing a recorded piece based on his interpretation. He’s an amazing violinist multi-instrumentalist with a recording studio in Venice. Abby Banks is an old friend who is always down for fun and messing with the weird; a true Brattleboro Vermonter at heart and good vibes all around.  She’s done a bunch of tour managing and merch duties for bands throughout the years and shreds with the Skate Witches. Guy Blakeslee was recommended to me by a friend and I don’t know much about him but I’m excited to see what kind of sounds he pulls out! 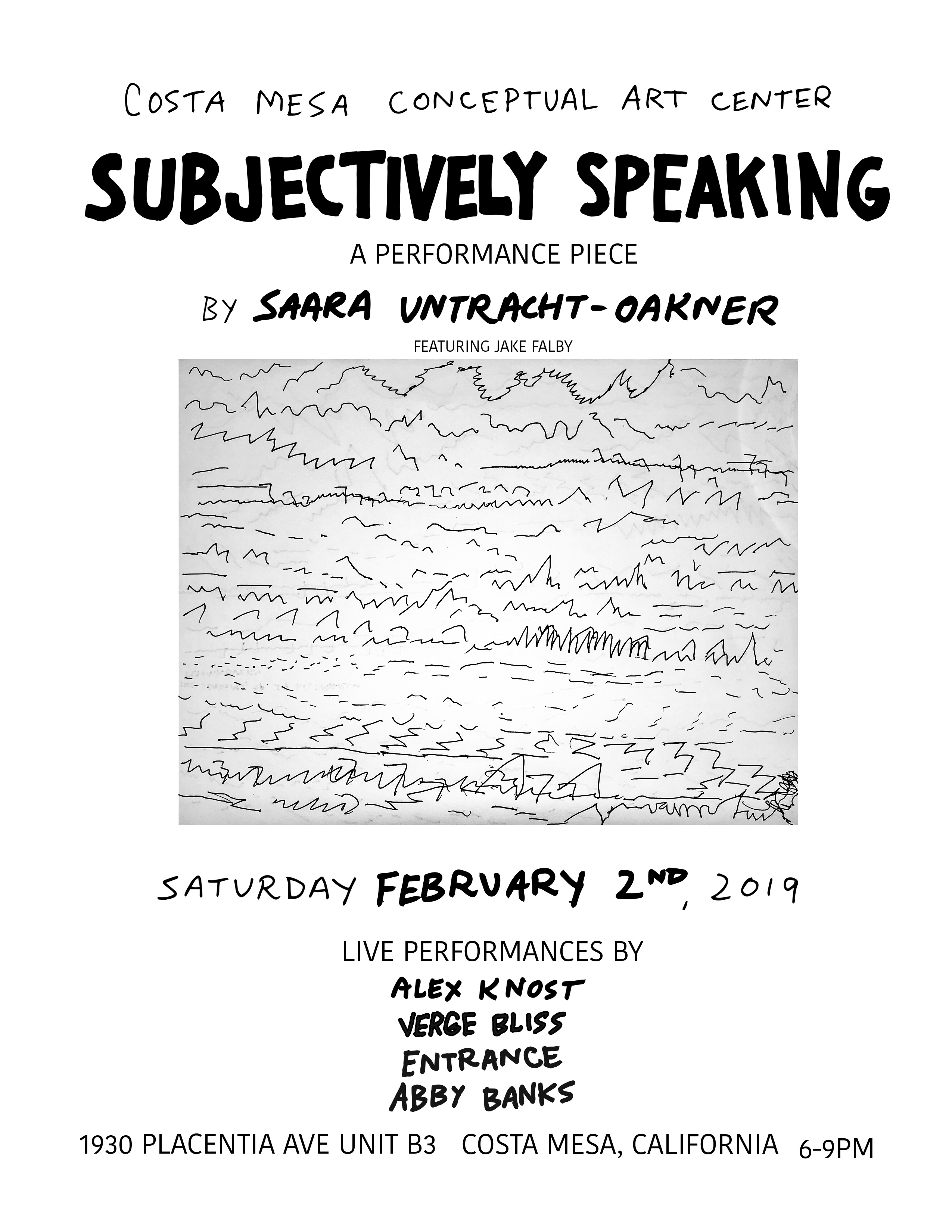 The title of your exhibit, “Subjectively Speaking,” is a such an appropriate title for what you’re doing. Not to totally dumb it down, but I’m instantly reminded of the game telephone that I’d play as a kid, which must’ve been my first introduction to how things so drastically change by word of mouth even if it’s just between 8 people. Do you remember when you first become conscious of how people interpreted things so differently?

It’s absolutely like telephone.  Ultimate telephone. Like if you spoke into the talk text of your phone and then that message was drawn by someone else who gave it to another person that had to explain the drawing to a blind person.  I was actually thinking of naming the show something to do with “telephone” but the phrase “Subjectively Speaking” popped into my head and it felt perfect.

I’m not sure of the exact moment I realized people all interpret things differently.  I think I still have to remind myself of that every day. Meaning can be so misinterpreted semantically. Especially in this day in age with texting, we lose context and expressiveness. That’s what’s so fun about art to me, is that everyone can create their own meaning. We all make our own truths anyway. In the end, it’s not what someone says or how they say it, it’s how it affects you.

Obviously, in this political climate, people will mold and twist facts to better support their cases. While that isn’t a great thing, your exhibit kind of shows the beautiful side of interpretation; that there is no wrong answer when it comes to art. When conceiving the idea, were you inspired by “fake news” and politics? Do you at all consider your exhibit a positive response to ugly politics and their abuse of interpreting facts?

I hate politics.  My grandpa used to say to my mom and her two sisters, “What do you have to be to be a politician?” And they’d all say, “A crook!”  I try to stay out of politics as much as possible. It’s such a fucked up rigged game. Play as little as possible while still being effective. Vote, but don’t get caught up in the bullshit. Live morally and be good to the people around you. Pick up litter, stand up for human rights, do your part as a human on Planet Earth. Ride the wavelengths that make you feel good and inspired. Connect on a physical level, not necessarily intimately, but share space and transfer energy. Communicate openly and freely.  You don’t need to speak the same language to communicate. Some artists I approached about performing said “I don’t read music,” but they don’t need to. What I draw is not something with a set of rules.  I like that about art. It transcends language.

You’re an artist of many different mediums, whether it be music, photography, painting, even furniture design and the list goes on. When creating in a particular medium, do you often interpret that piece in the other mediums you practice? Does it just depend?

I think that different inspiration calls for different mediums.  There’s something divine about creativity. Where do these ideas come from and what inspires it?  I believe in the common consciousness. Ideas are energy and produce waves and those waves can bounce invisibly throughout the planet, maybe the universe.  For me personally, some feelings just want to come out in different ways. Sometimes it’s a poem, sometimes it’s visual, sometimes it’s a snapshot in a moment.  I don’t consciously transfer ideas across mediums but my voice is always my own voice, as yours is yours, so there’s an inherent crossover of themes or ideas, the way I think, the things that make me, me.

We all make our own truths anyway. In the end, it’s not what someone says or how they say it, it’s how it affects you.

A lot of your work, like BOYTOY’s “NY Rip Off,” and your “Home Office” installation piece, have a satirical and surrealist feel to them. Has humor always been something you’ve incorporated into your art? Were there any artists and/or comedians that brought out this kind of dry, dark humor?

I love art that makes me smile or laugh or is fun. As children, we draw and pretend and make things all the time and then people grow up and lose that. There’s a kind of wonderment I want to feel and create and share with people. I think of silly stupid shit all the time. The simple stuff that hits the spot. The obvious mundane things that upon inspection are so ridiculous and strange. Things we take for granted or simply scan over without really observing.  I talk about how weird it is that I live with my dog and just have this furry little creature that sleeps in my bed and understands things when I talk to it but it can’t talk. He’s there every day but when I really look at him it blows my mind.  I used to lay in my kitchen at my parents’ house growing up and look at things and all of a sudden realize I’ve never seen it like I was seeing it just then. Like I had the same cabinets in the kitchen my whole life but now all of a sudden I’m really looking at them and they look different.  I have really vivid wild dreams all the time and have always coveted my dream world. I think it’s important to keep imagining to keep growing as people.

I always really enjoyed weird and creepy shit.  I loved and still love Ren & Stimpy, Pee-wees Playhouse, Tales From The Crypt.  I loved anything Jim Henson and live action stuff with puppets and animatronics.

I’m sure it’s like asking you to choose a favorite child, but do you have a favorite medium? If so, why is it your favorite?

I don’t think I have a favorite anything. No favorite band, or food, or shirt, it’s always a couple of things at once.  I’m never satisfied with one thing, I want it all. Sometimes I feel like that’s a flaw and I spread myself too thin. Like if I focused on one thing and really mastered it might be better. But I think I would get bored. I compulsively make things because I hate sitting still.  I always feel like I could be doing something productive. Music and drawing have been a part of my life since I can remember. My parents saved all my old sketchbooks which I’m very thankful for.  There’s definitely some funny stuff in there and themes I still gravitate towards when making art today.

Do you have any favorite artists right now (comedians, musicians, illustrators, performance art, etc.) that we should be keeping an eye on?