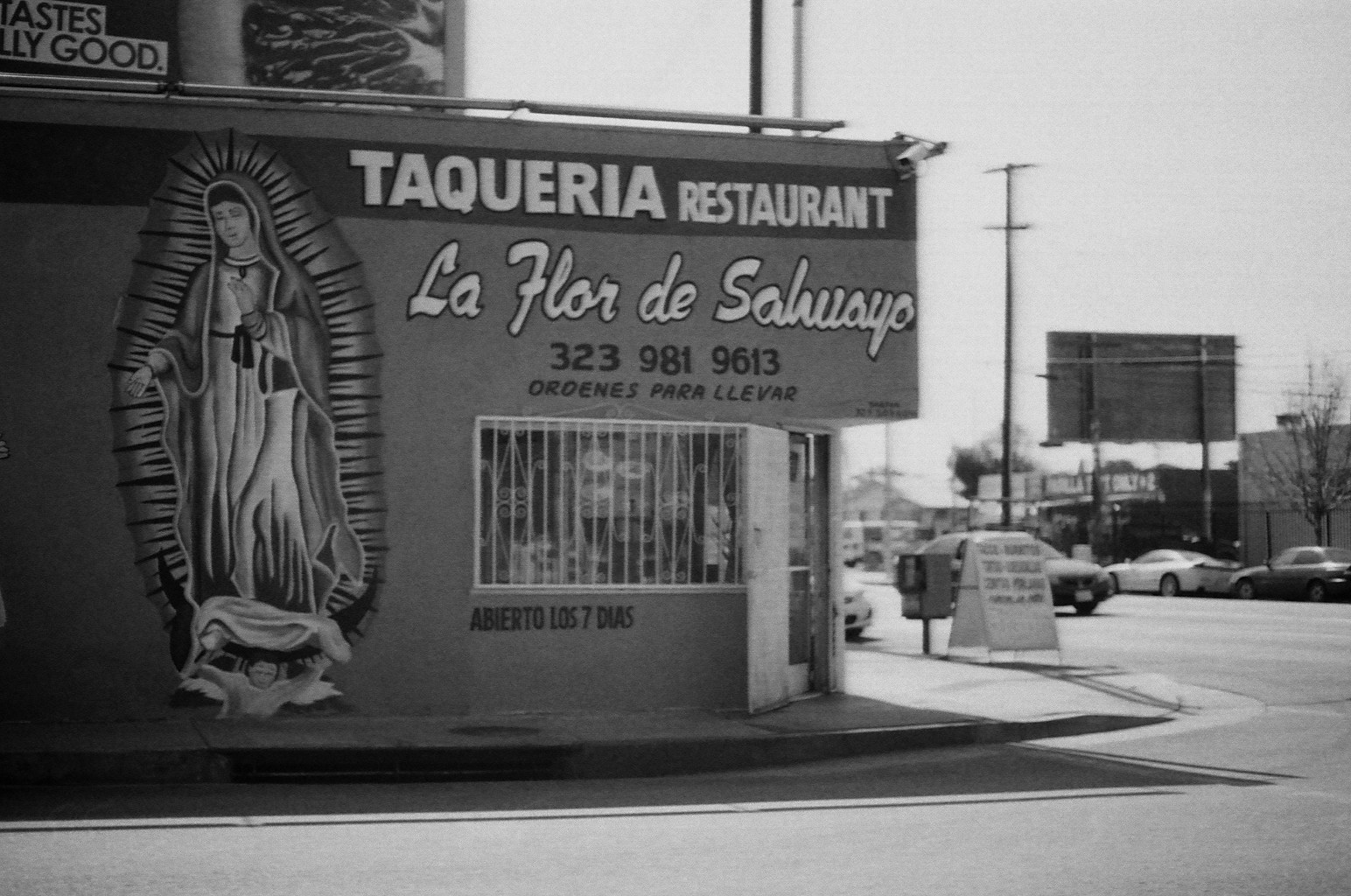 The Last Virgin in LA

If you head north on Figueroa Street, you’ll pass the familiar purple glow of the Staples Center, the 73-story US Bank tower, and the quaint gardens of the Los Angeles Public Library. Almost immediately after passing the 101 Freeway, you come to an intersection. Turn left and you’ll find yourself on Sunset Boulevard; land of chic coffee shops, infamous nightclubs, and Amoeba Music. Turn right and you’re on East Cesar Chavez Avenue; a street lined with crowded bus stops, brightly colored buildings that read, ‘Carniceria,’ and coin-op laundry mats every couple blocks. Although Sunset Boulevard and Cesar Chavez Avenue are essentially the same street, they represent two different worlds. Two distinctive sides of Los Angeles connected by one street.

I started out walking down East Cesar Chavez, snapping photos of every Virgen de Guadalupe mural I passed with my old Canon AE-1. I found myself sneaking into the front yards of houses to catch a glimpse of home altars, illegally parking to quickly jump out of the car and snap a Polaroid of some building-size murals, and crazily giggling to myself in excitement when walking down a familiar street and encountering a mural I had not seen before. I’ve travelled on sketchy downtown streets with friendly delivery truck drivers, who have led me to hidden murals painted on the backs of liquor store parking lots, and have struck up conversation, while eating deep-fried shrimp tacos, with the women and men who routinely pass by these public art pieces.

Standing on the corner of East Cesar Chavez and Carmelita Avenue, I watch an older gentleman make the sign of the cross and gently kiss his thumb and forefinger as he passes by the grandiose mural of La Virgen that is plastered on the wall of a local beauty supply store. As I approached him I could see her image at rest under his skin in a tattoo on his left forearm.

“I pass by her image every morning, and I can say that she stands as protection for this neighborhood and as a blessing to all the people that pass by her each day,” says LA resident, Michael Garcia. “It’s interesting how embedded in the community La Virgen is for everyone that lives around here.”

From Inglewood to the San Fernando Valley, and all across LA the Guadalupe’s image, whether big or small, permeates daily life and stands as a symbol of solidarity; one that confronts the complexities of LA’s multicultural status. Women see her as a source of empowerment. Men recognize her motherly and all-forgiving nature. Political and social movements have adopted her as the face of their causes, and many hail her as an evangelizing agent helping to protect and spread religious faith.  The multitude of Guadalupe murals that decorate the otherwise graffiti-ridden walls of local markets and businesses throughout LA depicts a specific ethnic consciousness and cultural space for not only the vast population of Mexican-Americans that inhabit this cultural Cuisinart we call the City of Angels, but also range of Angelenos who have embraced the Virgin Guadalupe as an image of strength, power, and cultural unity.

Mary Pardo stands facing her makeshift home altar that occupies a small corner of her porch. Floral arrangements and previously lit candles flank the large portrait of the Virgin at rest above the altar, donning her emblematic green cloak and illuminated aura: two ubiquitous features of the woman declared, The Mother of the Americas.

“You walk around these streets and you see how her image emerges everywhere,” says Pardo. “Her image and the significance behind it, is in the eyes of the beholder though. We might all regard her image with great significance, but the reasons why we do so may be different from one person to the next. Her symbolism doesn’t come with that strength and power, we give it and appropriate it to her image.”

While Guadalupe’s image spawned from ethnic and religious origins—the brown-skinned Virgin is said to have appeared to a humble Indian peasant named Juan Diego in 1531, following the brutal Spanish conquest—her story is a celebration of race and ethnicity, and is embraced on many different levels by men and women, but also unifies Los Angeles’ myriad population. The ways in which La Virgen de Guadalupe is embraced and understood may differ from one group to another, but her enduring acceptance and pervasive presence throughout the city reinforce a unity beyond race, ethnicity, and religion. The beauty of this traditional and cultural symbolism is that we, the people, create it. Our images of faith, strength, and identity should be malleable, ever changing and expanding, like our culture, language, and lives. Her image stands as an attempt to show a slice of Los Angeles’ true face—a city of immense diversity despite increasing gentrification and change.

As contexts change, the ways in which the Virgin operates in LA change, too. La Virgen de Guadalupe’s image has transcended her secular significance and has assumed her place in a number of contexts in LA. Our Lady’s overarching function as a cultural warrior and one of the utmost symbols of strength, power, and connection, denotes a singular spiritual strength throughout the city that has long been present.