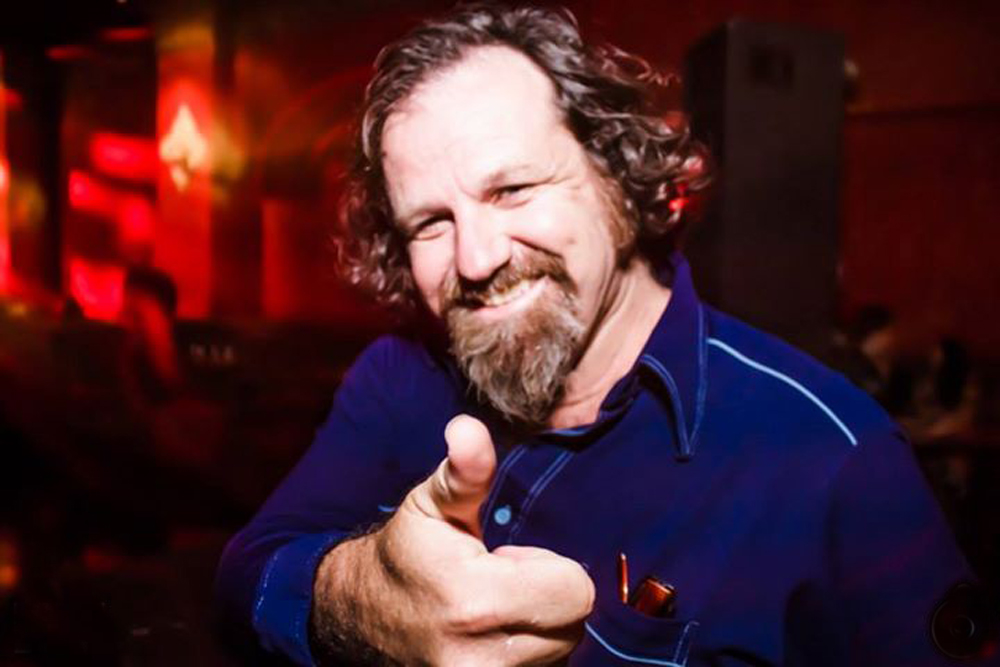 The Visualante: Inside the visual mastermind of Timothy Brunet

The importance of the visuals going on behind your favorite musicians as they stand on stage is often overlooked as we stare and become transfixed by the music. But bad live visuals can understandably detract and distract from the actual performance. Tim Brunet came into VJing – or creating live visuals for music – when those in the game were told to just make ‘trippy visuals’.

Dissatisfied with the form, Brunet saw an immense amount of possibility for what was just becoming a large part of the live music experience. Since his start over 15 years ago, Brunet has worked and created live visuals for bands like DEVO, and music festivals like Coachella and countless Insomniac events.

For Brunet it’s about creating a narrative that can be immersive and a non-linear visualization of the music. VJing, at its best, is creating a visual manifestation of what is going on musically, not just looping some animated wallpaper over and over again. Brunet lives for the moments when the music and the visuals collide to produce some type of emergent thing, an experience. His visual sets are just as important as the music being played at any of the concerts and shows he has manned as he creates a unique live-cinema experience that isn’t premeditated, but more something that happens in the moment.

So I’ve heard the term VJ before, would you call yourself a VJ?

They started to call us VJs, and it’s kind of a like a play on the whole DJ thing and the fact we are mixing and creating visual content on the spot, we’re taking other people’s content and mixing it, kind of like a DJ, but I’ve never liked the term VJ, I call myself a visual artist because I take a lot of my own content that I shoot myself and I mix in with the footage of the DJs or performers on stage.

Why is your job and performance just as important as the DJ or band on stage?

There’s not a lot going on with them, so DJs really need the visual, not so much the lights, more video. I go old school with it, I try and do a narrative to each song, and change things up quite a bit. I like using cameras to incorporate and tweak what they do; I got into because I really love music.

When you say that you use your own content that you shoot, what do you usually shoot?

It depends on what artist you’re working with, you know you go out and you shoot a lot of stuff. I like shooting nature stuff, sunsets, time-lapse stuff, experimenting with a lot of different things. I often go out and shoot a lot of street artists. Going down the skyline of LA, I like mixing in all of that. I really try and provide a narrative to the DJs song. A lot of times I don’t know what the artists’ set is going to be, especially when I am working with a DJ. Hell, DJs don’t even know what their sets are most times before they go on stage. I worked with Doc Martin quite a few times and I was setting up the cameras with him for an Insomniac festival, I asked him, ‘what are you going to play tonight?’ He pulls out his records and goes, ‘eeny meeny miny mo’ and just says, ‘ok lets go with these tonight.’

Seems challenging, but that must be part of the fun of doing it.

It’s kind of fun in that aspect, you never know what they’re going to play. I know the genres, but never exactly what tracks they’ll play. I like doing the drum and bass stages. The drum and bass guys and the MCs make those stages super fun, and a lot of drum and bass guys play vinyl still. I like putting cameras on them doing that whole thing.

So you’re producing the visuals on the spot as a reaction to the music that is playing.

Exactly, that’s the hardest part about it. You’re kind of like a part of the band since you’re going along live with them. You can really tell when the visuals aren’t being played live too. I‘ll go out and watch VJs and if they aren’t producing on the spot and react to the beats and counter whatever the DJ is doing, then it looks bad; you might as well put up an Apple screen saver.

Do you pretty much have free reign when someone hires you?

Yea, for instance with DEVO, they had their content already built and then we kind of showed them what we wanted to do with that content during their show. Sometimes DJs will be like, ‘I don’t want a camera on me, no cameras,’ but for the most part they’re fine, they’re cool with what you do. They’ll give you a little bit of content, like their name, and I’ll put it up there sometimes depending on what it is and what it looks like.

How did you originally get started doing this? What were some of your first projects?

Just being a music fan, I would go to shows and be standing there thinking, ‘I can’t stand watching a dung-beetle push dung back and forth twenty times.’ I thought, ‘I can do a better job than that.’ I started out doing a lot of little warehouse raves, but my first bigger shows were done at Burning Man, a number of Insomniac shows like EDC back in 2005 or something like that – back when only two or three-thousand people were showing up. I was hired when they did it at the Coliseum for the first time, and I could tell right then that thing was going to get huge. There were 30,000 people there. It was cool being a part of it as it grew and seeing it go through its waves of popularity.

When you got started the technology must have been drastically different.

There weren’t that many people doing it at the time and when we first started doing visuals we couldn’t really use computers, it was more analog, more using video tape and tapes. We used computers more as playing videos, but not actually mixing stuff. They would crash back then because video just ate up so much M-reader.

How have you amassed the most content over the years?

The content thing is really hard. A thirty-second graphic can take as long as a week to make; that’s a lot of hours. It’s a lot of work to build a small little graphic. When I was working the Insomniac shows, or any other big show, I would be VJing a stage for 12 hours straight. Eight different DJ sets on my stage and you have to be able to change things up. That’s the thing about being a good VJ, having a lot of content and being able to change things up each set. Giving a different look for each guy.

Where do you look for clips for your visual content?

I’m a fan of movies and film, so I have a pretty good knowledge of film. I found a great devil from ‘Tenacious D in The Pick of Destiny.’ That’s a great fucking devil, so I was like, ‘oh well damn I need to steal that clip.’ So you find these little tiny thirty-second clips from random movies and films you see and remember. I got the best little unicorn character from Blade Runner, of all movies. It was a random dream sequence in the movie, but as a VJ you have to remember and recall things like that in order to amass content for your visuals. I’ll take those little clips, you go out on street and shoot live, and you just end up getting a lot of stuff. Just like a DJ you’ll mix a lot of stuff together.

The inspiration right now is to take this kind of thing to the streets. I do proposals for the city, trying to get the art out on buildings and stuff like that. That’s kind of a thing they are doing around the world. They’re actually building these huge buildings in China, Singapore and Dubai and are actually building LED into the structure of the building so from a distance you can have flowers or whatever it is, video shots, on the side of these massive buildings. I want to start getting more of the video art outside, onto buildings, and in the public arena.

Why is LA such a great place for creatives and artist types right now?

I’m a fourth generation Californian, I was born and raised in Orange County. I’ve lived in LA for about 15 years, and to finally get to LA it’s kind of weird. People come from all around the world, at great expenses, to live in LA and work here as an artist. LA gives you the opportunity as an artist to fail gracefully. I mean you can live here for pretty cheap, and there is so much support from other artists. All my friends are artists; it just ends up that way. When you’re all kind of in the same boat, you end up becoming part of this network of artists and creatives. Since there are so many different types of artists, collaboration is very accessible. There’s nothing holding you back from creating cool stuff all the time. There has to be more artists here than any other place in the world.