This feature on Grant was originally published in issue 19. Available for purchase here.

I met artist Grant Levy-Lucero in 2016 when he was knitting for fashion, film, and art performances. I remember being instantly struck by Grant—this tall ass hardcore-looking dude who’s knitting pink Bernie Sanders sweaters. What’s he about? Turns out every summer Grant would be dropped off at his Grandma’s house where she had a knitting group with her friends. He learned how to crochet and knit when he was young. Duh.

Since then, Grant has transitioned to creating ceramics, specifically combining form and painting to create beautiful and humorous sculptures emblazoned with pop culture references (think Greco-Roman forms painted with Nutella or Animal Crackers logos). Grant’s art is instantly recognizable, “I’ve been doing this particular work for three years, and these sculptures represent classical antiquity mixed with hand-painted signs and advertising.”

I sat down with Grant in his Arlington Heights studio and we chatted while he smoked a spliff and gave me the low down on his get down. 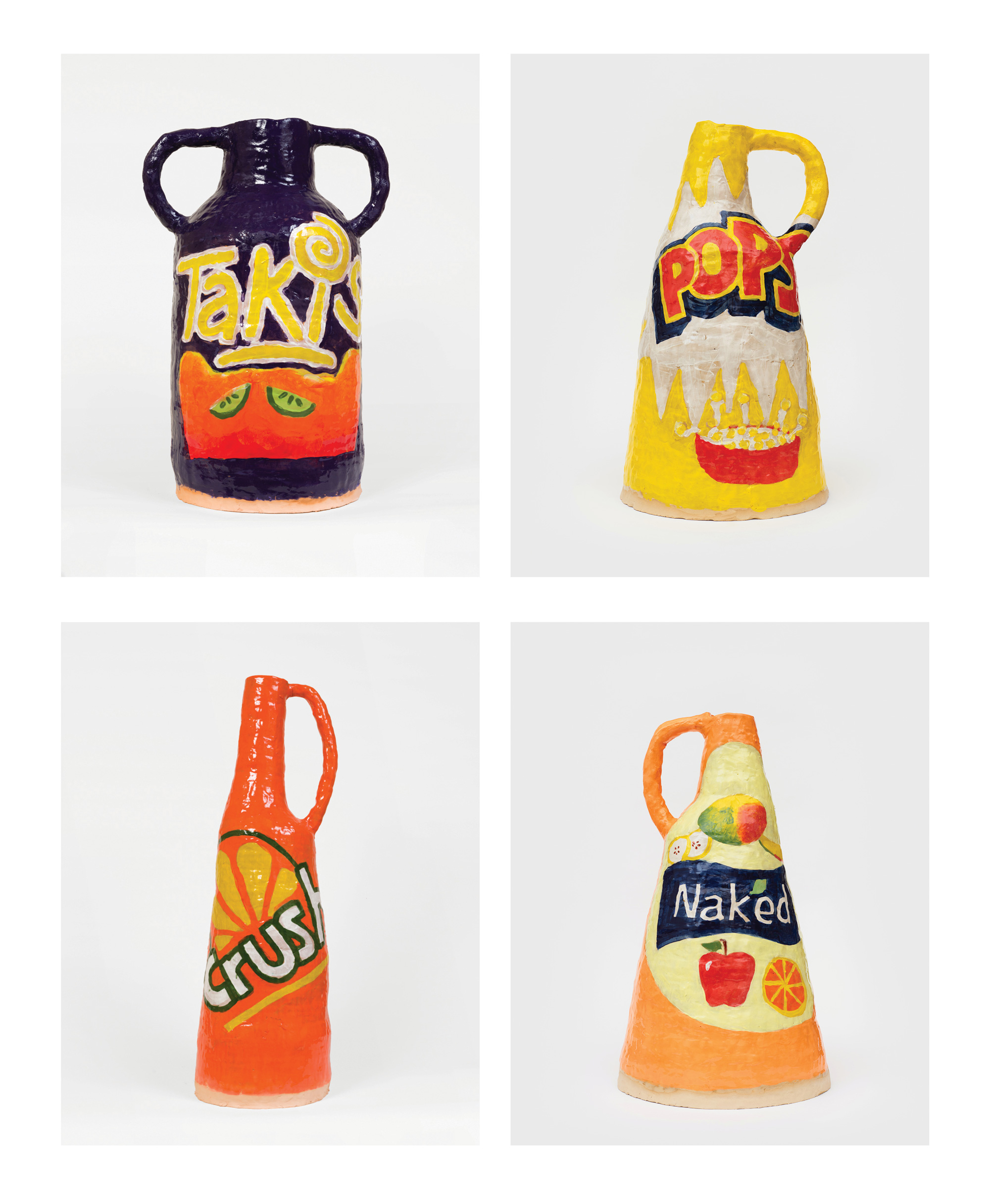 I first met you when you were knitting, how did you transition to ceramics?

For ten years I knitted and had a studio downtown. Right next door to my studio was Laura Owens’ studio, who is another artist here in LA. She had a clay studio she wasn’t utilizing that much and every week she would invite different people to come and they could work on whatever they wanted. I started going as a reprieve from the knitting. At that point, I had some clients I wasn’t super inspired to work with. So I needed a break and it was so close. That was the first time I started working with ceramics. I met a great group of people and most of the original “clay day” people are still in touch and we’ve all gone on to do some really interesting things. It was a springboard for different talents.

Your last show was in New York at White Columns and was called Pedigree, which featured vessels painted with different types of dog food brands and portraits of different dogs in your life. You examined and played with subversive undertones like the “dog eat dog” mentality of art and word-play, like what “pedigree” really means. What was the inspiration behind the show?

It was overwhelming to approach New York because it is such a different landscape. Here in LA it seems like we have artists that really support each other and a community that builds together. My preconceived notion of New York is it is a town built on criticism. I was already feeling really overwhelmed and started thinking about words. I thought that the word “pedigree” was funny and the fact that it’s a dog food that’s super cheap and something I would never feed my dog. It’s a funny mix of words. Once I arrived at that starting point it was a way to do portraiture of other dogs that are in our community too. Each one relates to someone’s dog that I know or have interacted with. I did the show at White Columns which is one of the oldest non-profit art spaces in New York. It’s a very legendary place and there was a lot of pressure.

How do you deal with pressure?

I try to not allow it to weigh on me. The art isn’t really about me at all; it’s about other people. I happen to be this person who has a brain and a hand that works just channeling through me. I try to get to a point in my working day where I am really executing. It goes back to knitting too—having to sit there and make a whole sweater. You’re not thinking about the thing, instinctively you know what to do and you are just executing it. 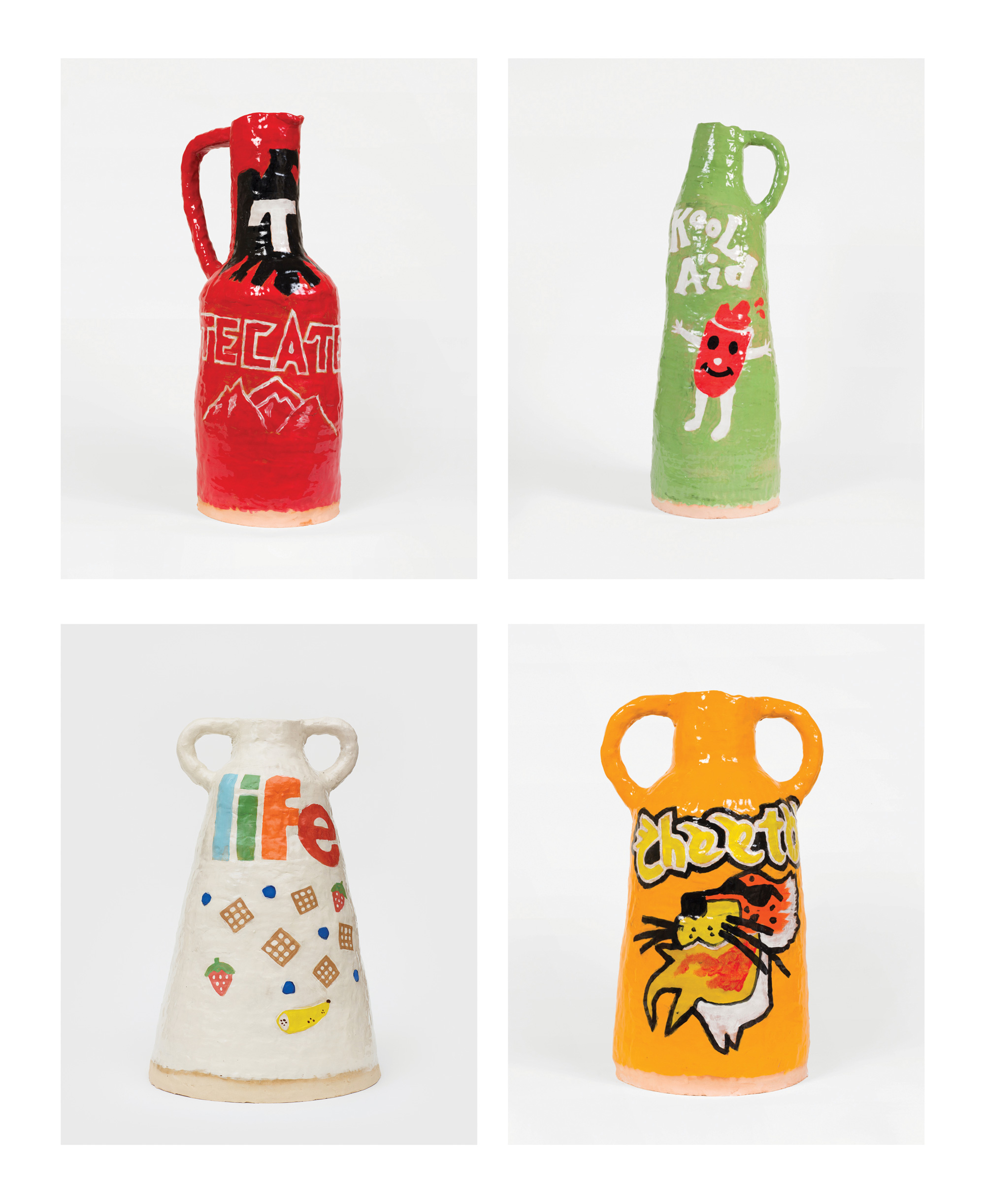 Do you have any rituals you do before you start working?

Coffee and a spliff.

Why do you create? What is your why?

It’s really just an opportunity for people to engage with art, there’s a responsibility there. I’m not educated and didn’t go down that route. For so long I felt like I was at a disadvantage because I didn’t go to UCLA or USC or something. But I arrived at all these things on my own. I am trying to be a portal for people to come in and see what’s happening. There are so many good things happening here in LA, so I feel like with this mix of form, paint, and signs, people can already recognize it. The form is instantly recognizable as the birth of cultural representation. If you go to any art history book and you open the page, the first picture is a Greco Roman form with a painting on it. Anyone who’s thought about art can arrive.

I use the form that’s already open and accessible. People have their guard down. Then I use these signs and visual cues. I don’t know if you’ve ever had Fabuloso, or whatever product I’m depicting, but people still know exactly what it is. It’s this subconscious thing and it’s very accessible. It doesn’t matter if you’re a child or a hundred years old — there’s something that I want people to interact with. It’s not about cutting people out. Sometimes I’ll go to an art show and feel really disconnected from it. I’m like, “Oh this isn’t for me, this is meant for someone much smarter than me.” It can be alienating, especially art spaces. They’re not the most inviting place. I want this to be for everybody where people can arrive at all different things. It’s like when you hear music for the first time, and you got into punk or hardcore, or whatever else. You heard something and you’re like, “What is that and what are those other bands around there?” And then all of sudden you start knowing everything. There’s always that first interaction that opens up that whole possibility for you.

What is the biggest lesson you’ve learned?

Life is long and my personal goal is to just make art for the rest of my life. It’s good to remind yourself you’re on the roller coaster and not the rocket ship. Especially if you’re going to go all the way, you have to keep working and trudging along. Never stop believing. If you keep pursuing with sincerity eventually you put yourself in the conversation. It might not be immediately. No one can deny what you’ve made with your time here. They might not like it and that’s totally fine—not everything is for everybody. But if you keep doing it with conviction no one can take that away from you. Ever.

What does success mean to you?

When you’re moving towards something you’re like, “This is the thing I really want,” and then you’re working, working, working, and then it comes and just like that, it’s over already. And then you have to look at the next thing and it’s very hard to relish in every success and be like, “Hey I’m the king now.” I don’t feel that way at all. I think that success is just to build and do what you want for as long as you possibly can. At the end of the day that could be something different for so many people. 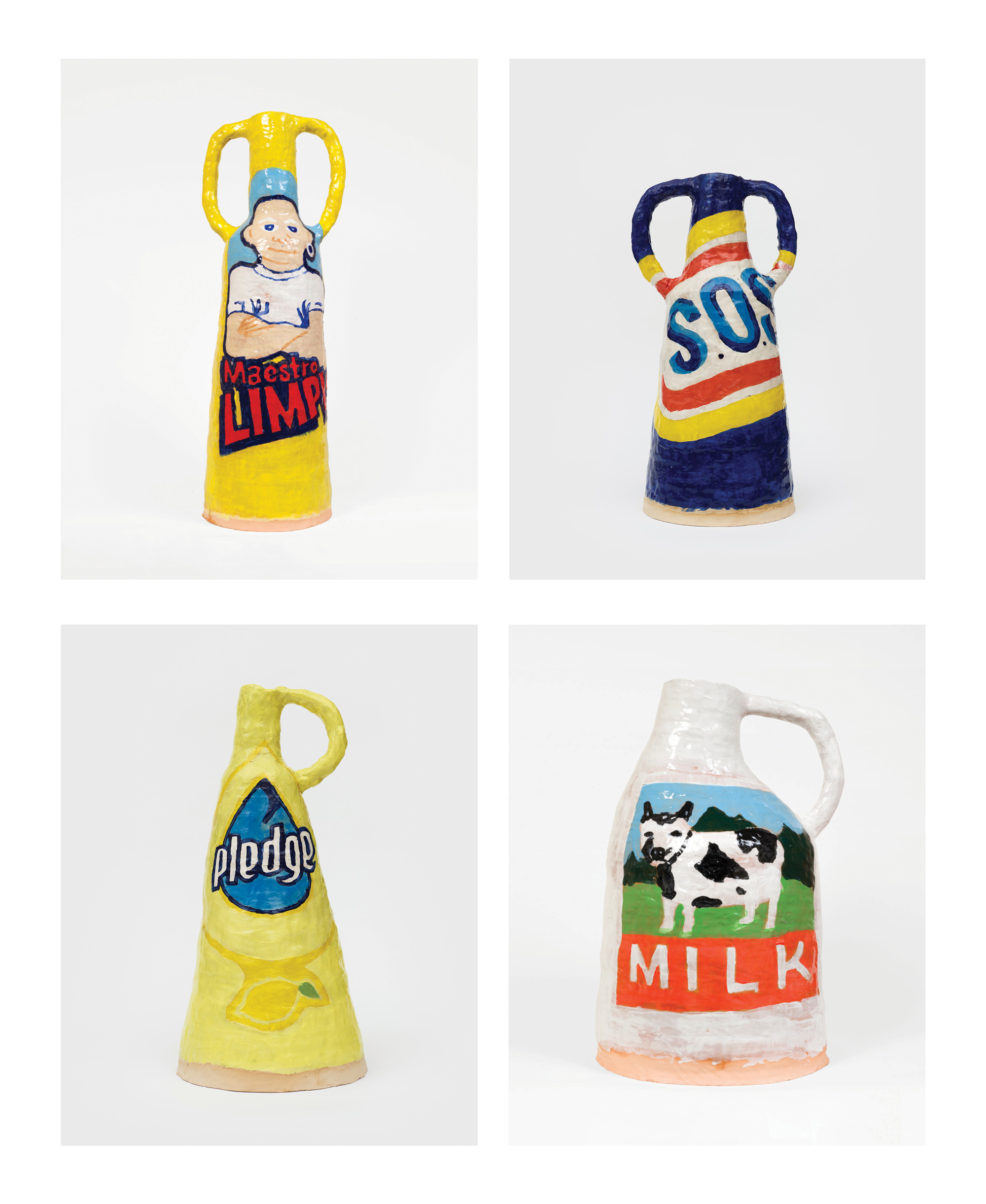 Fame, probably. I feel like I’m better at that and now that’s just a taboo thing. I have this romantic version of history. I think about Paris in the twenties, where everyone congregated in one place, or New York in the seventies, where all these people were at the disco or at this studio. I feel like we have something really, really close to that in LA right now, and I think that when it plays back in the future people are going to be like, “Woah, all those people were here.” I totally romanticize my own self into that retelling of history.

What do you think is special about LA and the people that gravitate here and make this community?

I’ve dealt with people the past twenty years who are like, “LA sucks. I’ll never move here.” All of a sudden all these people are singing a different tune now. I think it’s something about space and there aren’t a lot of obstacles to entry. I feel like in New York there are a lot of artist-run spaces and galleries, and you can pop into the scene and find your little bubble, but it’s so black and white. It’s blue-chip and LES spaces. There’s not a celebration the way there is here. There are all these creatives within a five-mile radius within this space. So many creatives have spaces and are working on different projects. That’s not just art, it’s everything.

What are you into right now historically?

I’m into pop imagery. Old cartoons and Looney Tunes. If you focus on any one thing it becomes interesting. If you went out and photographed every mailbox and made a book about it, there’s something interesting that will occur. It’s a way of traversing the city. The signs—that’s initially where everything started for me. I would ride my bike all over the city and photograph all these signs and through that, I was like, “I know where every sign in the whole city is.” There’s something to that.

Right now, I have an opportunity to do shows in Switzerland and Paris. It’s interesting working in the parameters from my perspective and what that is geographically related to. You look at the branding they are using for their own products. It’s super funny to me and extreme and then you mirror it back to them and it becomes this interpretation. I’m referencing your culture, but in a way that you use it to reference your own culture. It’s fun.

Freedom for sure. I’m all about it.

Where do you see yourself in ten years?

I have lots of ideas but it’s about patience and in time all these things will play out. I’m finding a lot of joy in exploring this work. By putting parameters on work, you can explore it in new ways. So in terms of ten years, I don’t know exactly, but I want to continue mining the well and exploring new ideas. That’s it.