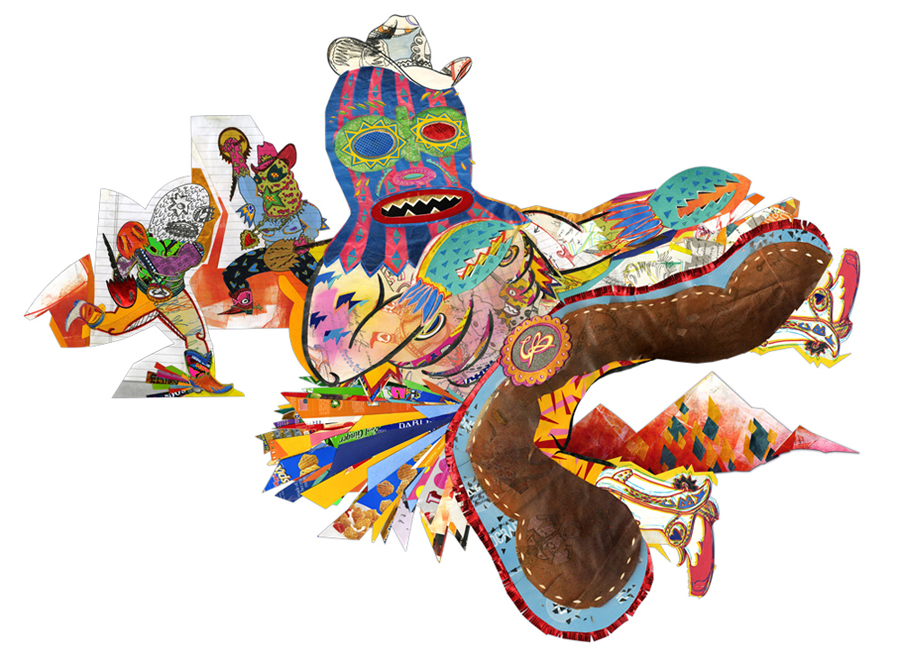 Keith Maclelland’s work has always been largely steeped in exploring the imagined notions behind the singing cowboys of the 1950’s – the Gene Autry and John Wayne types – who, with their fancily embroidered collard-shirts and leather chaps, could seemingly solve small-town problems from behind their wailing guitars. But this illusory image of a hero is no longer relevant in our world slated with festering issues that manifest in people’s daily lives.

In his most recent works, Maclelland recreates the American cowboy, piecing together lively and colorful collage-like figures with foil wrappers, mirror tapes, junk mail, and trash found lying about the streets. For Maclelland, these figures, although often misunderstood for being angry or evil, are modern day guardians and protectors that have the ability to be fierce and monstrous towards enemies, but kind and gentle simultaneously.

Crafted out of Maclelland’s own vision of what a modern day cowboy might resemble, these monster-like looking cowboys encourage a dialogue with the viewer that confronts our perceived definitions of a modern day hero.

Can you explain the your concept of the American Cowboy?

It’s rooted in the fifties era Romantic notion of the Hollywood singing cowboy, I really like that idea of who that character is and was. I like to romanticize that time in life. I think that back when these characters were who they were, they were idolized; they had enough money to save the day. They were snappy dressers, they were tolerant, they could help the townsfolk get the bad guy, and get the girl. They were 50-feet tall on the silver screen. So I think the root of this all comes from what they would be doing today. That idea of a cowboy isn’t really much possible in today’s world and today’s culture. So I look at these in an ideal world and they’d be large suits like Nick Cave’s Soundsuits, and you can get into them. I see these as 7, 8, 10, 12-foot— these big, monstrous figures.

I know most of the your materials are recycled and scraps. Have you always worked with recycled materials?

That’s always been a big part of the work that I make. And I feel as though I’m being a good steward of the planet. I’m not an eco-nut, but I think it all falls in mind with that cowboy mentality that I speak of— you’re doing good, you’re doing your part. And I love the fact that much of what these were made out of are discarded materials in someone else’s trash. There’s something we find in the garbage or on the side of the street and it’s elevated to something like this.

There’s so many parts to these cowboys, where do you event start?

This is as large as they’ve gone thus far and it forced me to work in parts and to think about scale, to step back. Things that I’m often trying to relay to students: it’s like step back from your work, look at it from a different light, sit and live with it for a bit, spend some time around it. Most all of these drawings start as little 3-inch, 4-inch doodles in sketchbooks. So I’m making theses little doodles just keeping myself busy and I then xerox those up 200%, then xerox those enlargements up another 200% and I end up with all these parts like legs and heads and torsos. I can mix-and-match, which is kind of fun, you know? What would happen if you all of a sudden he had two heads or no heads, or four arms or this body or that body? So they playfulness is really exciting.

Besides the references to the American cowboy concept, there’s kind of like that Lucha Libre influence. Where does that come from?

It all goes back to the same thing. I’m interested in Indians, and the original WWF characters like Hulk Hogan, the Iron Sheik, and Andre the Giant. I was interested in Lucha Libre and He-man, when I was a little kid. I look at theses as avatars or like second-skins, and a way for people to want people to have the fantasy that they could be this character. People are going to express themselves and act in a different way than they their face isn’t visible. I feel like these provide confidence to people, and allow them to act out in such a way that albeit heroic or just total freedom of expression. So I like the masking idea.

Does color play a part into that whole thing as well? It just seems like there’s so much going on, but it’s also cohesive still.

Exactly. My eye is darting everywhere, but at the same time, it’s very focused and sees the whole thing.

When I was in high school and early college, all my buddies drew this little boy art like aliens and predator, and these entire shoot ‘em up gore stuff. They had these dark color palettes and I so badly wanted that. This really is just my intuitive, internal color palette. Pinks, warm yellows, oranges, whites, primary colors— those really speak to me. Originally, I went to school to be an animator.

So how long does these large 4-foot pieces take?

I give myself challenges, like criteria that I have to work with so the piece with the three figures, each one of those figures were created in one night. And that was the rule. Like okay, I have this window of time before I go to bed, or I have this day, and so I want to create the piece in one day. They’ve evolved and have gotten more elaborate. Sometimes it might take a couple of days; sometimes it can take weeks because there are elements that I just can’t solve. It’s the sort of sitting and listening and just living with the work. And then sometimes I’ll put it away all together, or take it apart.

When does that time come? When you hit a wall?

When I hit a wall and when the post-it notes I leave myself aren’t working anymore, and I’m just sick of it. Maybe I’ve made a big error. And I try to stay really positive about that, that there really are no errors, because in this process it’s all fixable. If it doesn’t work, slice it off and try something else. But it’s still tough to do sometimes. If you spend a long time on a particular element you’re really attached to, it’s hard to detach, so you sort of have to try and remind yourself to step away.

The smallest details really make this collection of works stand out.

That’s the thing. I save everything. I’m sort of a pack-rat. Super organized about it. But yeah, candy wrappers, bubblegum wrappers, scratch tickets…

This is such a large show for you, figuratively and literally. The space is huge!

It was super stressful. But I work well like that. Under the gun. When I was towards the end, I got up, had breakfast, went right into the studio and I would eat and drink throughout until it was time for breakfast again. There were a few night’s like that to make this work.

When you’re in it, you don’t realize time at all.

It’s a documented thing, you know? When someone is really in the state of flow, they’re impervious to anything else. Whether it’s food or sleep or water. You’re just, you’re in it. In this space. And I think that happened. It’s pretty exciting to be in that space.

Music is all over the board. I like everything. In late evening I may want to listen to some Coltrane or Miles Davis. But I also like music really loud, so it could be three in the morning and I want to crank on some Death Grips. I feel the energy in these works. I like to work loud, I like the music loud. So I feel like these have a volume and I’m often responding to the music.

It’s definitely a product of the environment you’re working in.

That’s right. If I’m working on an element that needs some fine cutting or details, maybe that’s when I am listening to Coltrane and Davis.

Where do you see your art going next? Do you see it evolving already?

Oh yeah, I think so. I was working so much to make these for this show that there’s been a hiatus at the moment. I’m not making anything really now, I’m sort of living with it. I’m looking, I’m thinking, I’m reading, I’m listening.

Keith Maclelland’s “Hero Cowboys” are showing at Hynes Convention Center through the end of May. See more of his work here. 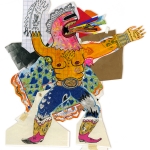 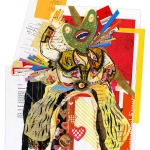 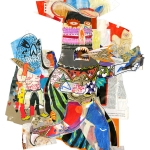 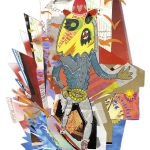 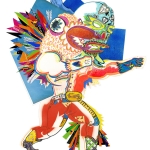 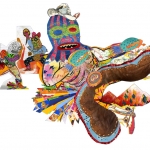