This interview was originally published in issue 14.

“My house is starting to be cool, but it won’t be full-fantasy until, like, April,” says multimedia installation artist Marina Fini, slow-panning me through a laptop to show me the colorful disarray of her newly-hers house. When she’s not packing, unpacking and decorating personally, she’s packing, unpacking and decorating professionally. The irony is not lost on us.

Even in its semi-fantasy state, hers is one of the most inviting spaces I’ve “been in,” virtually, or not. “I’m obsessed with mirrors and self-reflection,” she says, cradling digital me on a walk around her place, alien-dungeon guest room and all. There’s a ten-foot-wide acrylic rainbow and natural sunlight streaming through rainbow-filmed floor-to-ceiling windows overlooking Joshua Tree. A coyote casually strolls by her place while we chat. I can’t believe it; she’s freshly unfazed.

Marina Fini’s aesthetic is potent. Through color, light, and energy, her installations, or healing spaces, offer relief from reality and the fallacies that attach to it: “These worlds create peace in my mind and in other people’s minds. I feel like there’s a lot of darkness and evil in the world, and I try to combat it by creating hyper-fantasy.”

“Goddessphere,” a feminist strip-club concept she created for Art Basel in 2016, visualized what a strip club might look like if a woman or a queer person owned it, and how that would change the experience. “It was the whole idea of what does a strip club hold space for, and how can it be flipped on its head. Because everybody should be accepted into the club.” The installation was shut down twice. Her recent LA installation “Lyrics to Life,” a collaboration with Genius and Dropbox, inspired by Radiohead’s “Creep,” was fucking rad: a rainbow enclosure beneath neon door beads, and a metallic floor garnished with healing stones and colorful iMacs and iBooks containing Fini’s personal files, through which onlookers were able to creep into Fini’s digital existence. Fini crept on her creepers through hidden cameras. A transparent reality would be nice, but at least we have Marina Fini.

If you had one “signature” outfit (like a cartoon character) what would your cartoon outfit be?

I wear a lot of my own pieces, but I also collect other people’s pieces. I’m always on the hunt for large jewelry and crystals. I love really weird chokers. I do costume jobs and styling jobs and photo jobs together. People will hire me to dress and shoot, which means I have a fun visual closet. 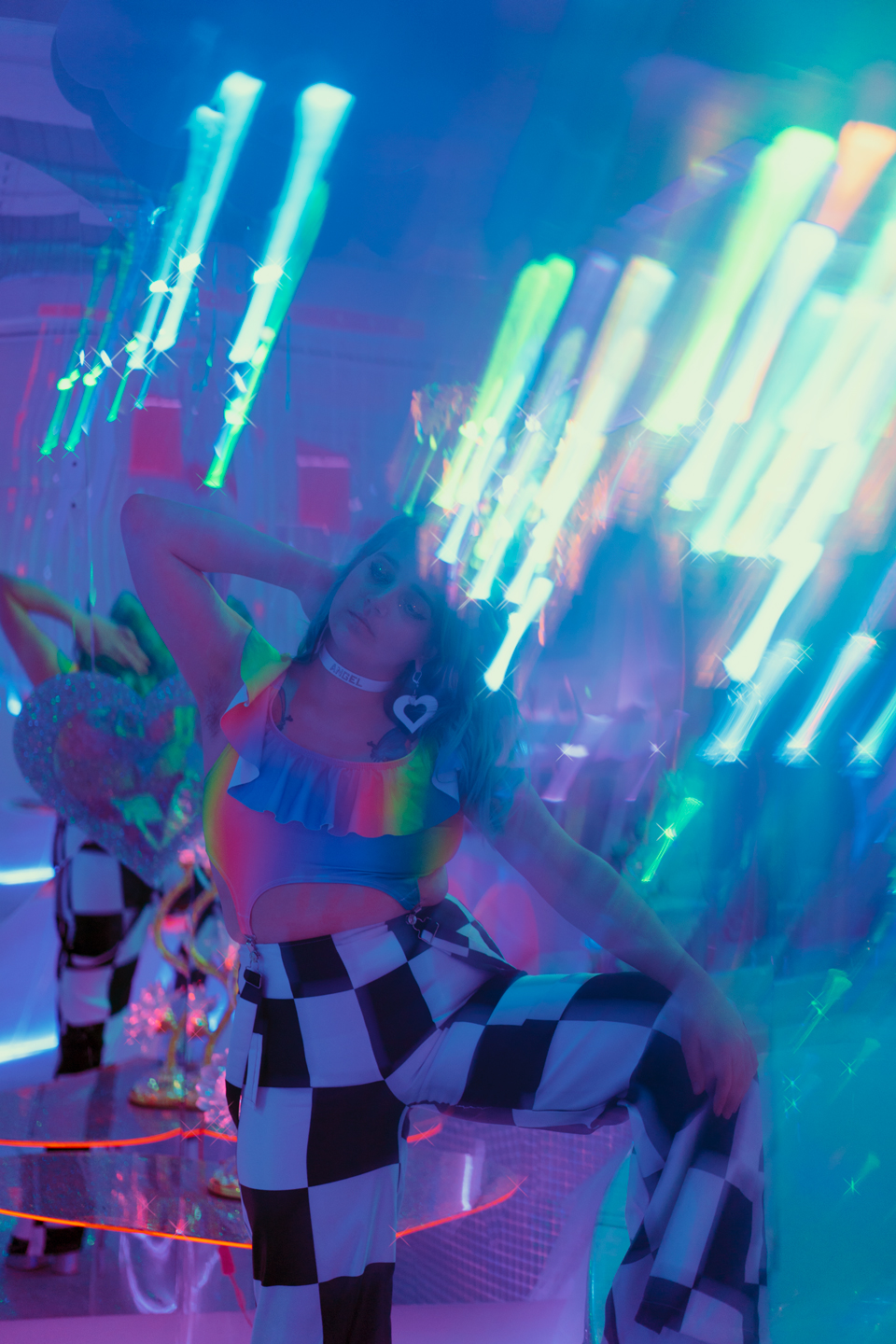 You grew up in and around Hollywood, right?

My dad works in television, so I grew up on set with him. He worked on Power Rangers when I was little, and I got to be part of that world, which was really exciting.

Then I went to college for film production, studied a lot of theory and it totally broke down my whole reality of what I grew up in. It made me feel like I could be myself for the first time because Santa Cruz is very accepting. I had a lot of support and change within the shift in myself, and in my art—it just broke down all of these different barriers that I had grown up with: vanity, ego-driven people and what people want as make-ability in film. For me, all of the film and photography work that I want to put out there, I want to give people a voice—people that are under-represented, or misheard, or not shown enough. I’m all about inclusivity and diversity as much as possible. Creating a platform to help empower others and feel like they can be themselves is something that I really strive for in everything that I do.

I’m all about creating a place where queer voices and gender-fluid people and anyone, really, can express themselves. Creating safe spaces with my installation work is important to me—creating a happy place where there can be unity. Rainbows are my life. Spreading rainbows, and helping people feel like they can be activated with rainbows because we are all rainbows because our bodies are made of them. They exist in nature and can create a beautiful sense of peace between anyone and any walk of life, no matter what language you speak. It’s like a sunset: it spreads a beautiful language that can act as a really great activation for spreading light and making people feel happy.

Would you say your work is more personal or interpersonal?

It’s extremely personal. I feel like all my work is just me since I was little, collecting and creating and building the fantasy sets and rooms that I would have wanted as a child. Also with the way I dress—I used to look up to older girls and characters in certain movies—now I’m finally dressing like them because I couldn’t back then. In terms of my own self-analysis, I definitely put a lot of thought into each installation that I do and the way that it translates and the multiple ways that it can translate. I also really enjoy seeing how people can translate things in ways I’ve never even thought about before. I feel like a lot of my work has to do with a mix of healing, self-hypocrisy, and elevating consciousness.

Going from a place of studying Environmental Science for two years, and creating hyper-fantasy worlds with plastic is something that I’ve had an odd struggle with. Why am I working with plastic? Why? It’s a constant feeling, and I get really hard on myself for it, but then I try to get other people’s perspectives on it. I’ve had even healers or other lightworkers tell me that it’s about color and about making something with soul; it’s not necessarily what the object is. That’s when I started working with Reiki and started infusing it into physical pieces.

I guess I justify working with plastic because it exists, and if it exists we should make permanent things with it. And art can be permanent. If anyone ever comes at me with, You’re not sustainable, I’m like, I understand. I’m very self-analytical. I don’t like to be a hypocrite, but I like to self-examine ourselves as a culture. Plastic exists everywhere, and I’m almost using it as commentary in our world. I’ve also thought about the fact that I’m not going to be working in this medium forever.

It’s all been a journey, and extremely personal. In the last year and a half, I’ve really gotten into the idea of objects holding energy and creating objects that hold energy; if someone wants to buy a piece from me, how can I explain how an object is a healing device? I work with both crystals and I work with synthetic, and I really like examining the whole relationship between synthetic and organic in analyzing my personal relationship, but then, when I put it into an installation, watching people realize their own dilemma. 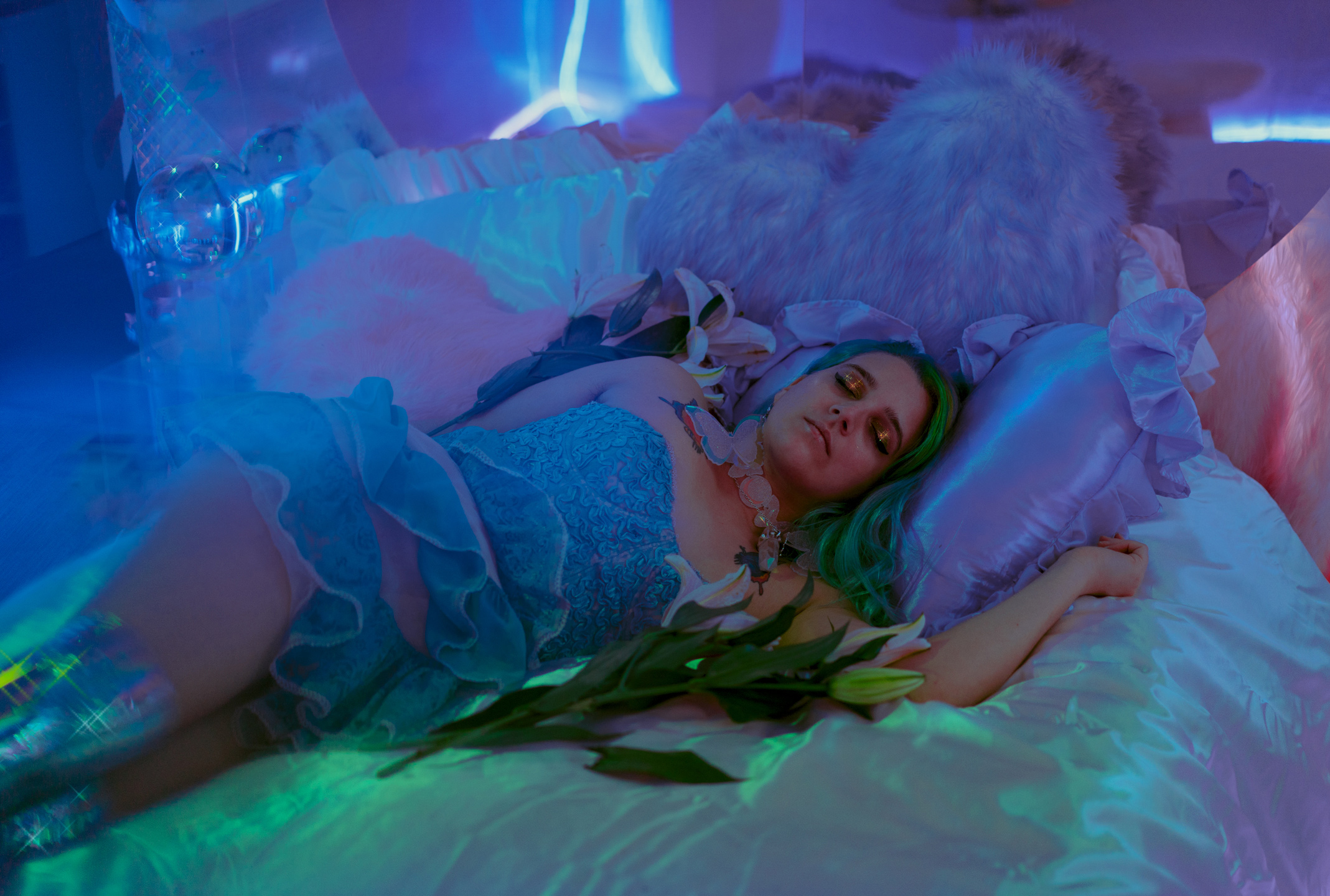 How often are your installations permanent?

Up until last July, my shows were a day or two, maybe. Then, last July, I had my first two-week exhibit, which was a really big deal for me—it was the largest space I’d ever done.

I’m trying to invest in a space that I can continuously build onto. I really want to make a permanent motel; like an art motel with maybe ten rooms, and each room has a different theme. I also want to open up a vegan restaurant that is an art installation, but, we’re feeding you. I’m really passionate about nourishing people with food, and one of my best friends is a vegan chef, so we’re going to be collaborating on that eventually. After doing so many installations in the last few years, I’ve been learning a lot about business, and about things that I don’t want to do and that I want to avoid. I really like the idea of people coming to visit, because I get so many emails from people saying, Is this still up? I’d like to have something where people can visit from any place, and sleep in it or just have fun.

Can you speak a bit to your artistic community and who/what you consider that to be?

I feel like my artistic community is all over the place, and not limited to one location or place. I love supporting other artists and giving them a voice as much as possible. I feel like, whether it’s photography or creating a space, it’s all the same to me: it’s all about supporting each other and creating a platform for voices to be heard and for people to express themselves.

I work with a lot of musicians and performance artists; I’m even directing two music videos this year. I love interpreting music and creating a visual to match what they see in their head. It’s been an inspiring exchange to have with someone. When I see people being themselves, that’s what I love the most.