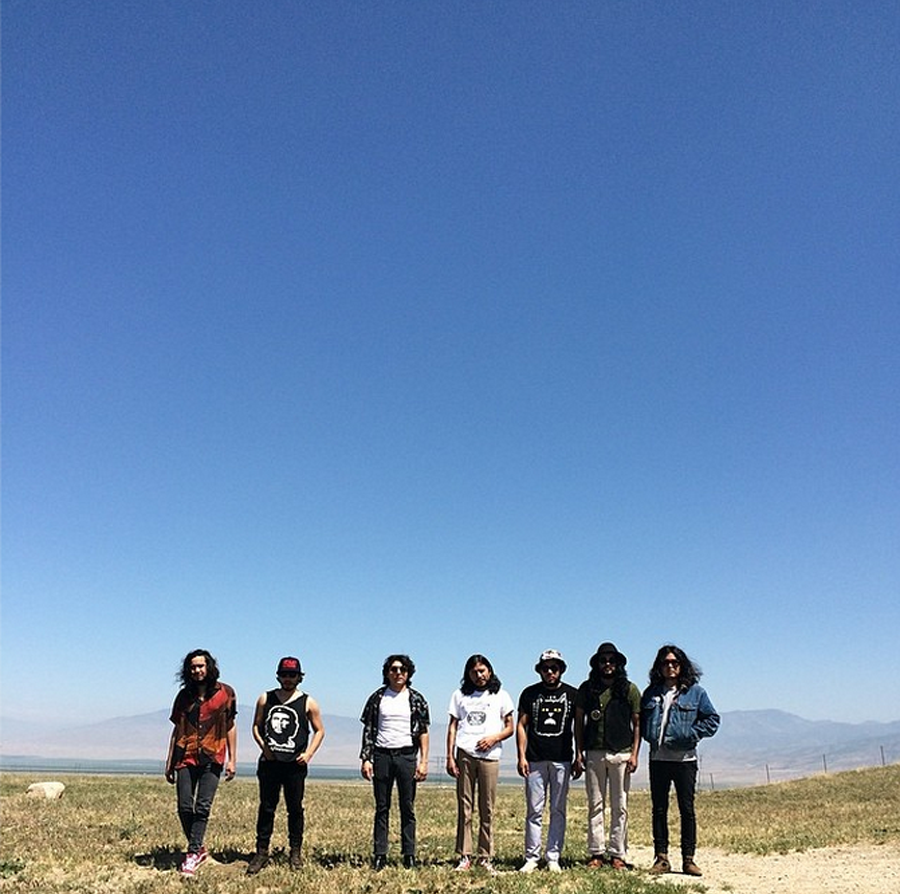 Santoros Find Their Way With Ancestros

Santoros would be at home in the underground psychedelic movement of the 60s. They’ve patented a new type of hypnosis in their rehashing of grooved-out lo-fi tunes on their 8-song EP, Ancestros. The seriously Southern California band never ceases to experiment with sounds that attempt to shake-up their up-tempo, easily digestible, surf-like jams. Put simply: you won’t get bored with these dudes. Easy-going guitars drive their mid-tempo tracks, dragging the vocals behind in a mopey, droning-sounding performance.

Amadeus is continually impressed by everything that this band does in any way shape or form and got the chance to ask the band’s Tony and Uriel Jimenez, and singer/guitarist Carlos Precichi about an upcoming full-length and creating psyched out folk songs in their native Los Angeles.

They’ve been touring the fuck out of this year and will continue to so go see them. Do yourself the favor.

How did your recent West Coast tour wrap up? Which city’s show particularly rocked?

TJ: On this last tour, we had no expectations. At the end of it all, we left so satisfied with the outcome. It’s hard to pick one city or highlight at the shows. Everyone received us with open arms! Definitely felt like home everywhere we went, From Seattle to the Bay area.

You guys have been around, playing the local LA circuit since like 2009, how have you seen the LA music scene evolve over the past 5 years?

CP: Has it been that long? [laughs] LA has always had a good thing going on, evolving is just part of the process. “The only thing constant in life is change,” with out it, we wouldn’t be where we are today, I believe that applies to our fellow musicians. Growing and experimenting with sounds has lead to many good outcomes in the past years and will just continue to do so!

UJ: Whatever direction it’s headed, it’s happening right now! And heck yes, we are lovin’ Mr. Elevator and the Brain Hotel, Psychomagic, Levitaton Room, Cherry Glazerr, Froth…etc. anything Lolipop Records is coming out with is pretty much worth a listen!

You guys came out with an eight track EP, Ancestros – for some bands that’s considered an album – what can we expect for the full-length?

CP: [laughs] yeaah, we pretty much couldn’t leave one song out. There’s a lot of new things we are working on and a few surprises for sure.

Why did you decided to do 8 songs on the EP?

TJ: Those 8 songs are songs we played through out our first show till now. They are songs our fans are familiar with, love, and sing along to. With that said, it felt wrong leaving one song out, so an 8 track EP was just a given.

I read Ancestros was made in honor of your ancestors who have inspired the band to make the music you guys do. True? Tell me more about this. What particularly influenced you guys?

CP: True. We have always been true to our roots, our experiences. There have been many influences throughout the years; it could be a night out that inspires a new song, or something more deep down within our ancestors. Other musicians/bands we listened to in our childhood to our adulthood. It all is a big blend of everything. That’s what makes Ancestros.

Sonically, where do you think you guys draw from the most?

Is there a stereotypical Santoros fan?

TJ: Our fan base is pretty diverse, no stereotypes just people who love to have a good time. Definitely dance and vibe out.

So you guys are working on a full-length album, your first, is it true it’s coming out in Spanish and English?

CP: Yeah, we are mixing it up a little. It felt right with certain songs to throw in some Spanish.

Why did you guys want to do that?

UR: It’s our native language. It was only about time we brought up some Spanish tracks.

What been the biggest challenge making this first album?

TJ: Picking out the right songs. What vibes out with what and that sort of thing.

I know you guys are opening for White Fence soon, that’s awesome! How have you found the most doors have opened for you guys?

TJ: Yeah, we are so stocked! Working hard and staying grounded. There’s nothing better than staying humble and true to what you do.

You guys are a seriously hard working band, so I imagine you’re on the road a lot playing a bunch of gigs, what’s the best part about being on the road?

UR: Spending that time as a band, we all have different things going on in our regular lives, that it feels good getting together with our brothers and chill, joke around and stuff.

What’s it like in the studio or during recording with you guys?

CP: A little bit of everything, we have our big mess around moments, making jokes on each other, being overly loud and then serious jamming time/idea flowing. Its all a good time and I think that reflects in our music. We put hard work into it but never forgetting to enjoy it.

How does the writing process go? Just one big jam sesh that turns into a more structured thing later?

TJ: There’s no marked down process in music making with us. There could be a jam session that evolves into a song or just an inspiration to something completely new. Or sometimes one band member comes up with the lyrics and then the music just flows with it. There’s not A-Z process.