Serge Serum does not scare easily when it comes to the complexities of the human psyche. Using reality as a springboard, he “makes a scene” of the ordinary by distorting peoples’ likenesses, in both his painted portraiture and outrageous photographs. His work has a curiously chaotic, and yet grounded feel to it. Often employing the use of heavy brushstrokes next to delicate details; powerful reds and yellows next to soft neutrals, Serge endows a feeling of ease in existing within what seems to be a messy actuality. The bold style he has brought to his latest work facilitates a sort of fill-in-the-blanks dialogue with viewers that is captivating. His photographs are far from unclear, though, with almost startlingly bright colors draping his subjects, who appear incredibly confident and comfortable in their costume-esque garb. All of Serge’s creations seem to be visiting from another world, and enlightening us when it comes to being complacent with one’s existence.

His new show, To Take Comfort, explores the alternate reality he personally feels most comfortable in. People will have a chance to see for themselves a combination of his photography and paintings, as well as conjoining performance art this Friday, in Downtown L.A. In the days leading up to his exhibition, Serge sat down with us in his studio to chat about his inspiration and process.

So, is Serge Serum your real name, or an alias for your art?

It’s my alias. My birth name is Sergio Sanchez. I actually got that name back in the MySpace days, when I was trying to think of a cool username. I was listening to Cannibal Corpse, and they have a song called “I Come Bled” with this lyric… let me find it. “Violent climax, surging serum on my skin, back from the dead.” I was very into [Cannibal Corpse], they were the first concert I went to alone. I was fourteen years old.

Do you prefer painting to photo, or vice versa?

That’s been tough, sometimes I go back and forth, but painting will always have a more personal feeling to it. You always need someone to do photography, while I always paint alone. This year especially, I like the paintings I’ve done. I’ve finally discovered myself as a painter. That’s the best feeling in the world—just creating. Even if its the shittiest artwork ever, the idea that it was nothing, and is something now. I don’t know, I just love it.

So you work with both painting and photo, and one of your newer concepts is basing a painting off of a photo. What inspired you to synthesize the two?

Yeah, I’m trying to do that more. I like the idea of combining the two, because oftentimes I don’t know which medium I want to focus on. It’s hard to find a balance.

In addition to your solo photos and paintings, you’ve published a zine called Polished, right?

Yeah, I started [Polished Zine] probably two years ago. I wanted to do a photo series on transgender individuals specifically, and have them tell their story. I had a friend who was converting, and she was struggling, and I wanted to help by introducing her to other people who had gone through that struggle. Some of the photos [in the zine] are staged; probably half and half. I’ve sent hundreds of emails—it’s a real struggle finding people who are willing to be subjects for this type of thing.

Where did you eventually find subjects who were open to sharing their world on camera?

Just online, I guess. I found out that there’s actually a lot of transgender people on dating websites, so I ended up going through there. Then I got introduced to the drag scene, and that ended up being so much fun. There’s a huge scene [for drag] in LA. Pretty much any day of the week, there’s an event going on. It blew my mind. It’s amazing how artistic and creative these people are with their outfits and performances. I feel like drag has so much potential to be a different form of performance art. I definitely see it taking off. A lot of the performances are lip-synched and stuff. I’m going to be releasing multiple zines once or twice a year as an ongoing series, but I hope to also start an event series, parties almost, of not necessarily the drag scene, but I want it to be very performance-art oriented. I feel like there isn’t a consistent platform for it. I’m a complete sucker for performance art, because it’s something I can’t real see myself doing. I’m really inspired by it. 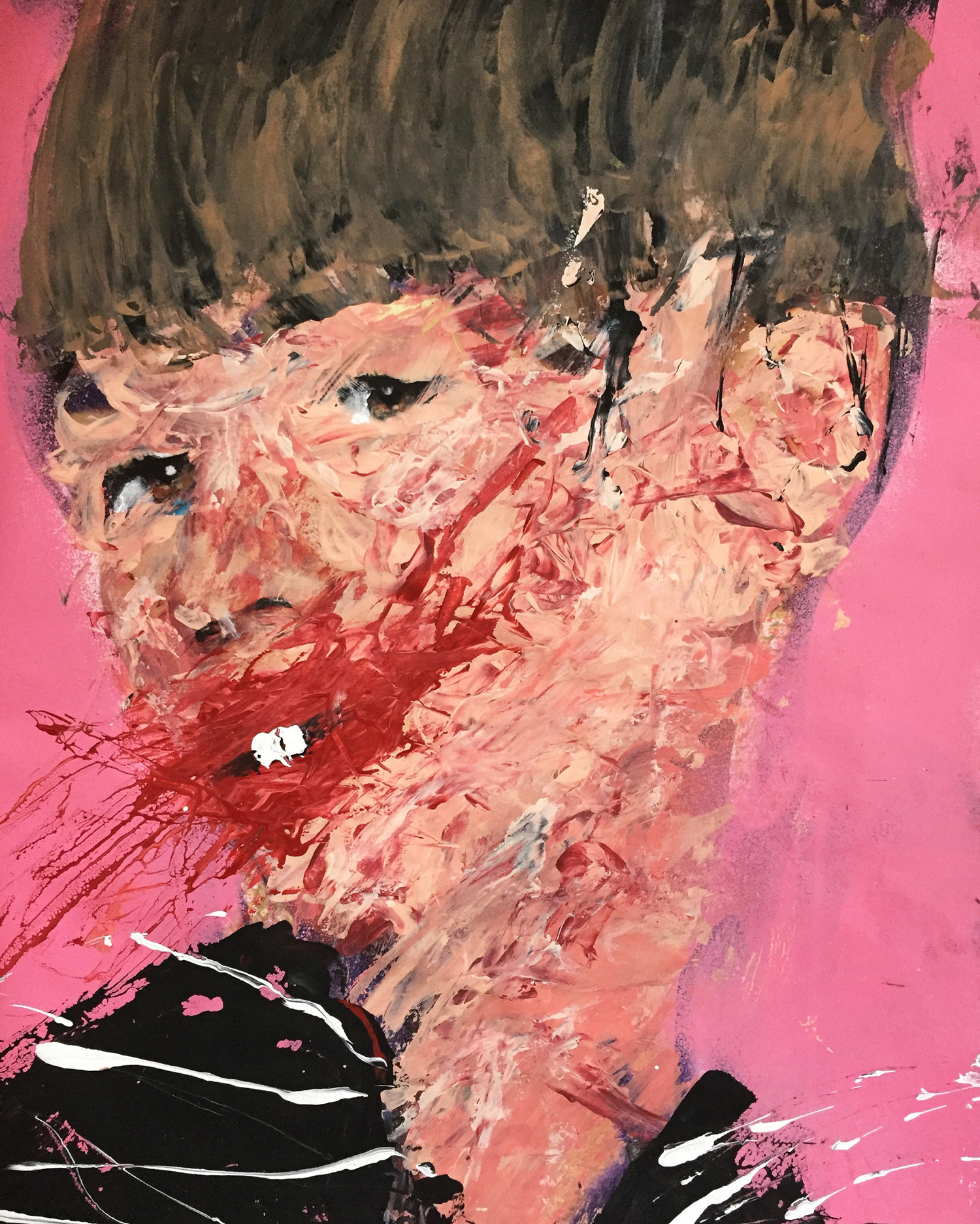 Give me a little background here—what’s your process?

It kind of varies per piece, I just finished a portrait series for the [upcoming] show that I started last year. I got started [painting] with portraits. Some of them I base off of real people, but with most of my first pieces I would try to create a face by Googling “eyes” or “mouth”, and I just put together separate images I really liked. I started basing some off of people because I felt like it was a lot more personal.

Every shoot that I do, I never have a concept before. It drives every model I work with crazy. They ask me what I plan on doing, and I always say I have no idea, we’ll see. The way I shoot is that I go to what is usually the subject’s house, and walk around, and move things around; just make a scene out of it. I feel like that allows me to be creative on the spot. Only recently have I been styling a lot of my shoots; going to thrift shops and buying a ton of stuff. Generally I hate planning things out, even with paintings. One of my favorite painters, Wyatt Mills, said something like “If you envision the end, you restrict the process.” I love that, because it’s one hundred percent true. If you have an image of what you want it to end up looking like, you stress yourself out over the process. I like to compare my art to Lord of the Rings—you could sum all of the movie up and say that Froto goes to the mountain and drops a ring in there, but it’s everything that happens along the way that makes the movie interesting. The process is the most important part in my work. 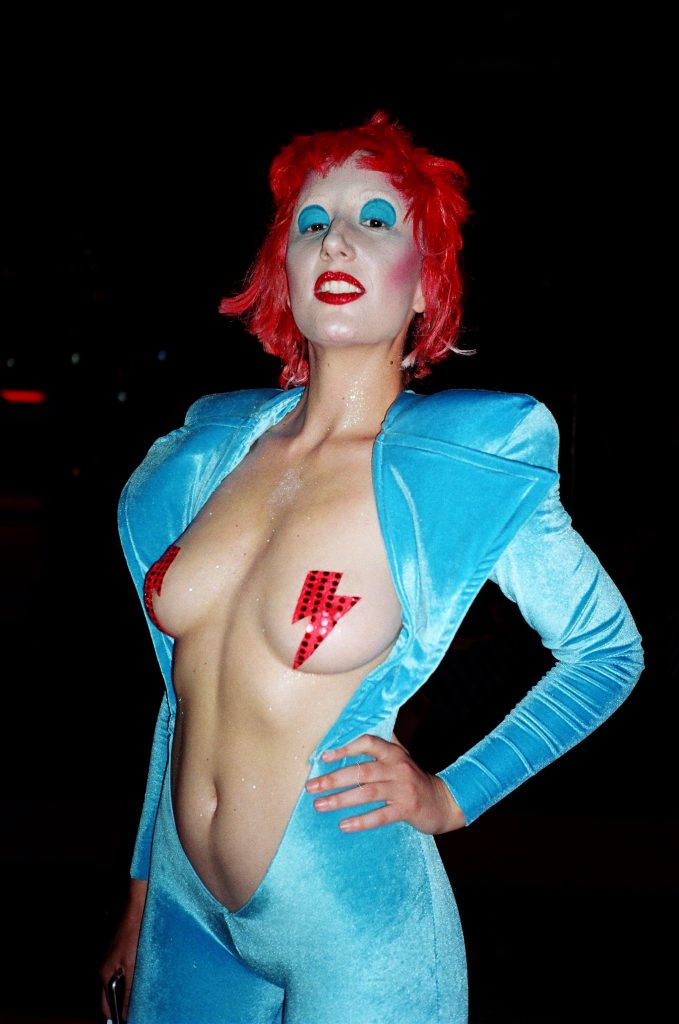 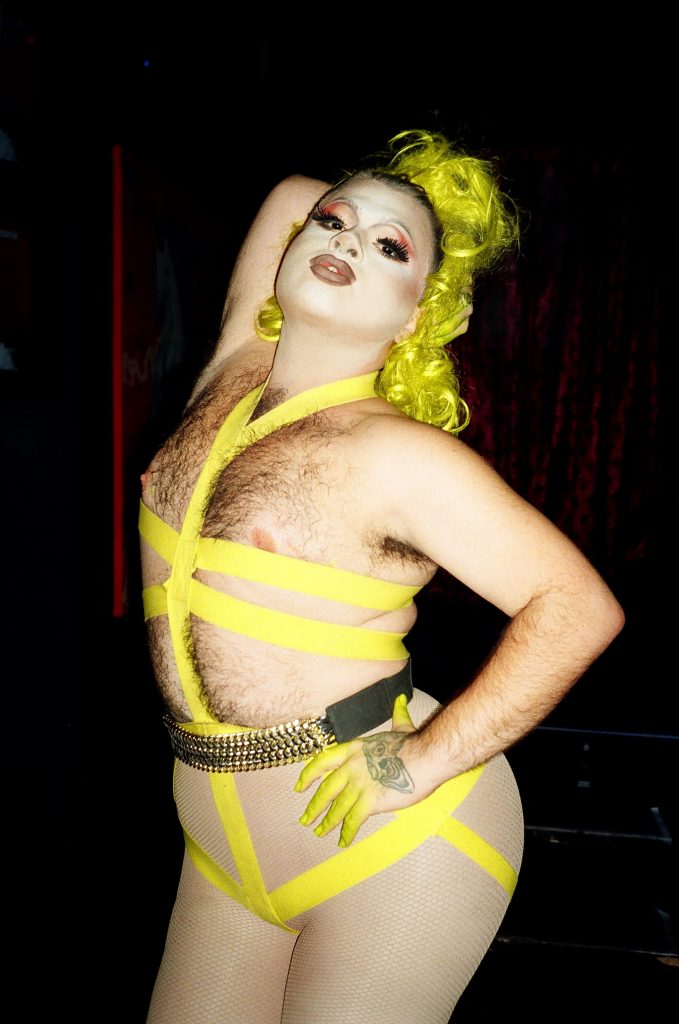 I think it’s important to kind of forget the technical aspects of art. I’ve tried to take art classes, and I end up dropping out after a week or two just because I can’t do it. It makes me not enjoy art. It makes me start to hating painting or drawing or anything, because they force you to do still life. I think it’s so uninteresting, painting a still life. I want to paint someone, I don’t know, crying or something. I remember my mom would often tell me that she didn’t like my paintings, not in a mean way, just that a lot of them are very sad; none of them are happy. She’s been my greatest supporter and harshest critic. Early on I would paint people very sad, I think that is something that everyone can relate to. Everyone experiences sadness, but not everyone experiences happiness. Another thing, too, is that people tend to remember the bad things more in life.

In most of your work, faces are obstructed. Is there a reason behind that?

I started doing that awhile ago, when I was actually painting someone the way they’re supposed to look, and it got really frustrating—I feel like it’s something that anyone could really do. You can paint someone how they are, but a million other people can paint them the same way. [You] imitate a photograph knowing that it is always going to be more real, and I got angry at that, and just threw paint everywhere. I try to make beautiful things ugly. I like to combine the two.

Are you trying to relay your own emotion in your art, or help viewers to evolve their own emotional experiences?

I would like for [my audience] to know what I’m feeling, but I know everyone interprets things differently. I don’t really like to explain a lot of the work, because I want the person to figure it out for themselves. I want to create a dialogue between the person and the viewer. 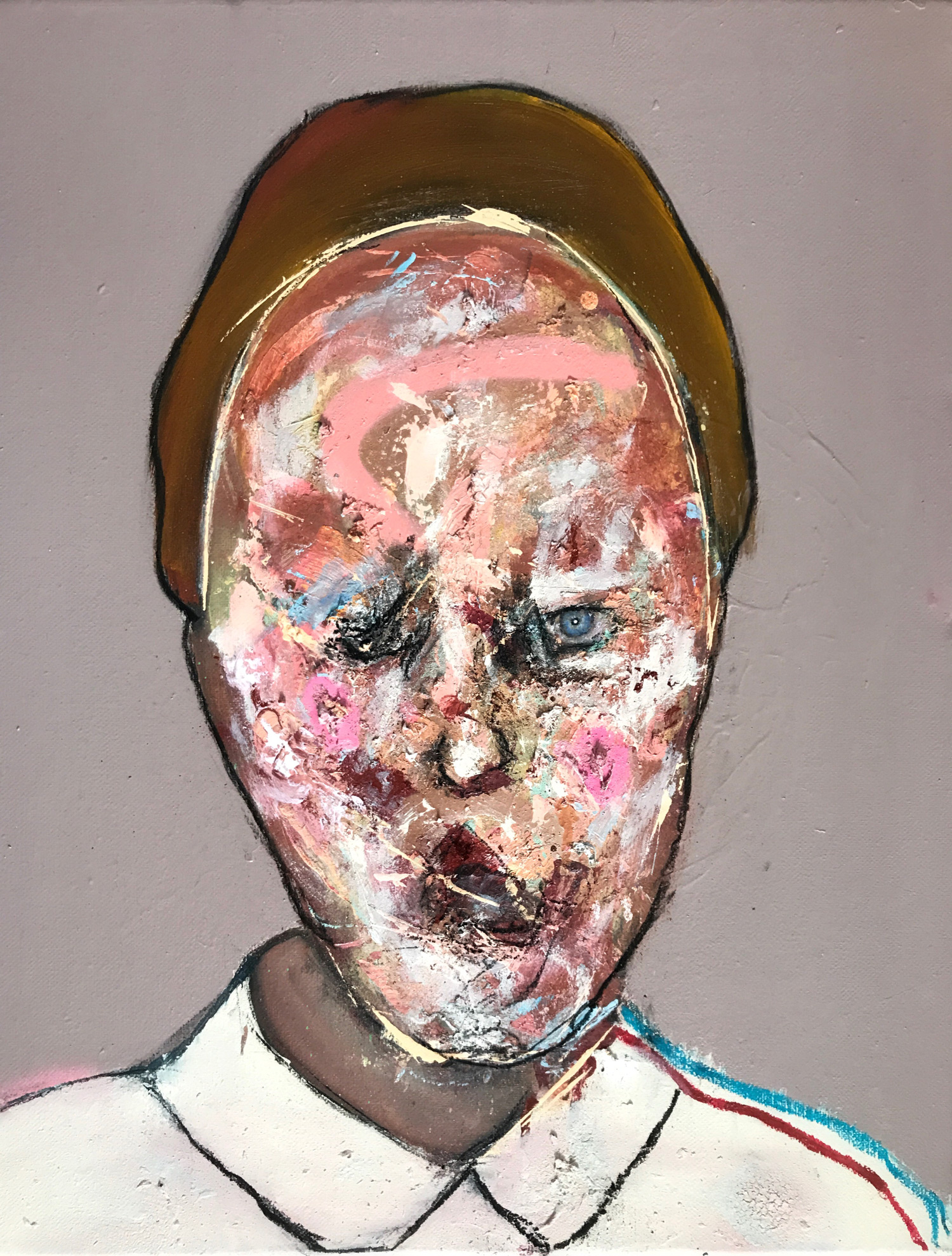 Where does the name of your show, To Take Comfort, come from?

It’s kind of like the idea of finding comfort in painting and art. I am my true myself when I’m painting. I think every person is the truest version of themselves when they’re alone. I only paint when I’m by myself. It’s me in my purest form. The average person lies nine to ten times a day, but when you’re by yourself, you can’t lie to yourself or anything. I find comfort in solitude. There’re times when painting, for me, is the most fun thing ever. I often lock myself [in the studio] for hours and hours. Most of the time I’m here, and I’ll often forget to eat. Nothing else matters when I’m painting—you don’t have to worry about the stressful aspects of life, like money, or other relationships, or work, or anything. Oftentimes when I’m out, I experience social anxiety, and [painting] is me seeking solace from that uncertainty and insecurity. One of the things that has been in the back of my mind constantly this year is the future, and the uncertainty of living as an artist; how unstable it is. It’s something that’s been very stressful for me, and painting is what helps me to trust in my future. Worrying about all that is to come doesn’t really matter.

That seems to be true, especially at this time in your life, at 24, everyone’s trying to figure everything out.

Yeah, I remember when I would talk to my friends, your 20s are incredibly stressful years, but it’s often seen as your golden “fun” years, because you’re seen as an adult, and you get to drink and party and do all of these things. But it’s also when you’re trying to figure your life out.

What types of pieces are you going to display in the show?

Mostly portraits, and a few big pieces. And a lot of photographs that I have been saving up for a while. This is my second solo show this year. It’s the first in LA, which is exciting, because I had one in Portland earlier this year, and I’m excited for all of my friends and people I know to see.

I visit Portland whenever I can. I have met the most amazing people, and there are so many good artists up there that I love to collaborate with and photograph. Most of my favorite photographers are based there. My favorite piece in the show is based off of a photo I took there, where one of my friends was curling another’s really, really long pubes that he had been growing out for a while.

Some more fun questions for you—do you have a favorite color?

I’ve never really had a favorite color, even when I was little. Buts since I’ve been painting, I’ve really been attracted to the color red. It just feels very powerful.

My favorite band ever would probably be Cradle of Filth. It’s black metal. I don’t really like anything they’ve done in the last seven years or so, but lyrically, I feel like I need a dictionary half the time. I feel like I’m reading Shakespeare with them. 20 years later, they’re still some of the darkest, most evil music I’ve ever listened to. It’s pretty wild. I listen to a lot of electronic music now, but my origins are in metal. 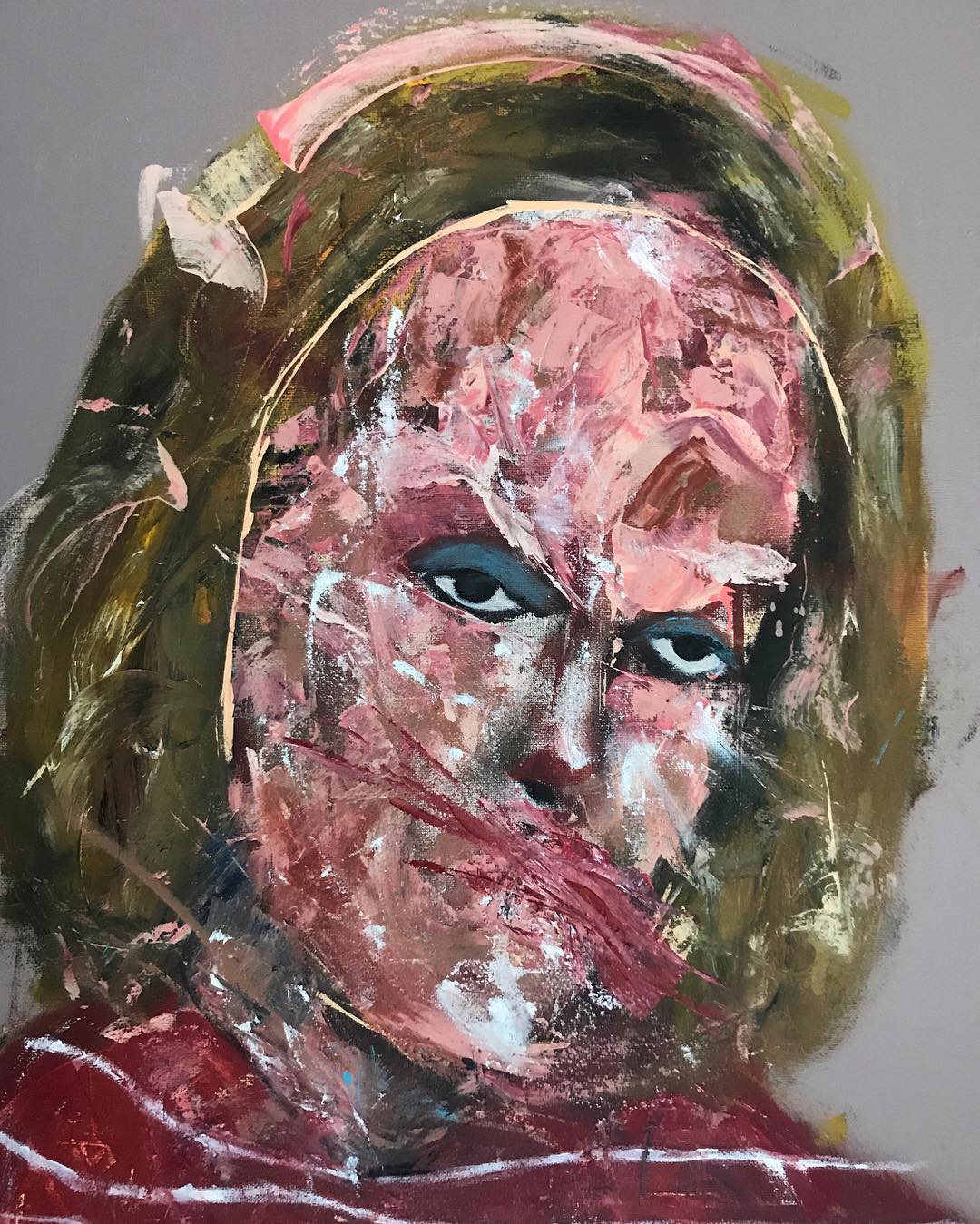