Tara Booth, the satirical illustrator and internet inspirer, has been through a sort of rebirth since 2015. Once riddled with anxiety and unstoppable self-deprecation, Booth now uses art as a mean to remain sane and deal with sneaky insecurity. Booth graduated from art school in 2011 and like a lot of art school students, she soon felt disillusioned with the practice, the galleries, the critics, and the expectation of what art should be. She took time away from art as fear crept in and her passion started to dim, and thus as a direct result, art took a backseat. While struggling to get out of the rut (that only got deeper and deeper), Booth “sunk into a dark, shame-ridden mental state.” She began grappling with her mental state and alcoholism, and after recognizing she’d “hit rock bottom,” the illustrator realized change was not only needed but necessary. She moved to Portland, worked on a farm, aligned herself with the alternative comic book community, and reignited the fire she once had for art. 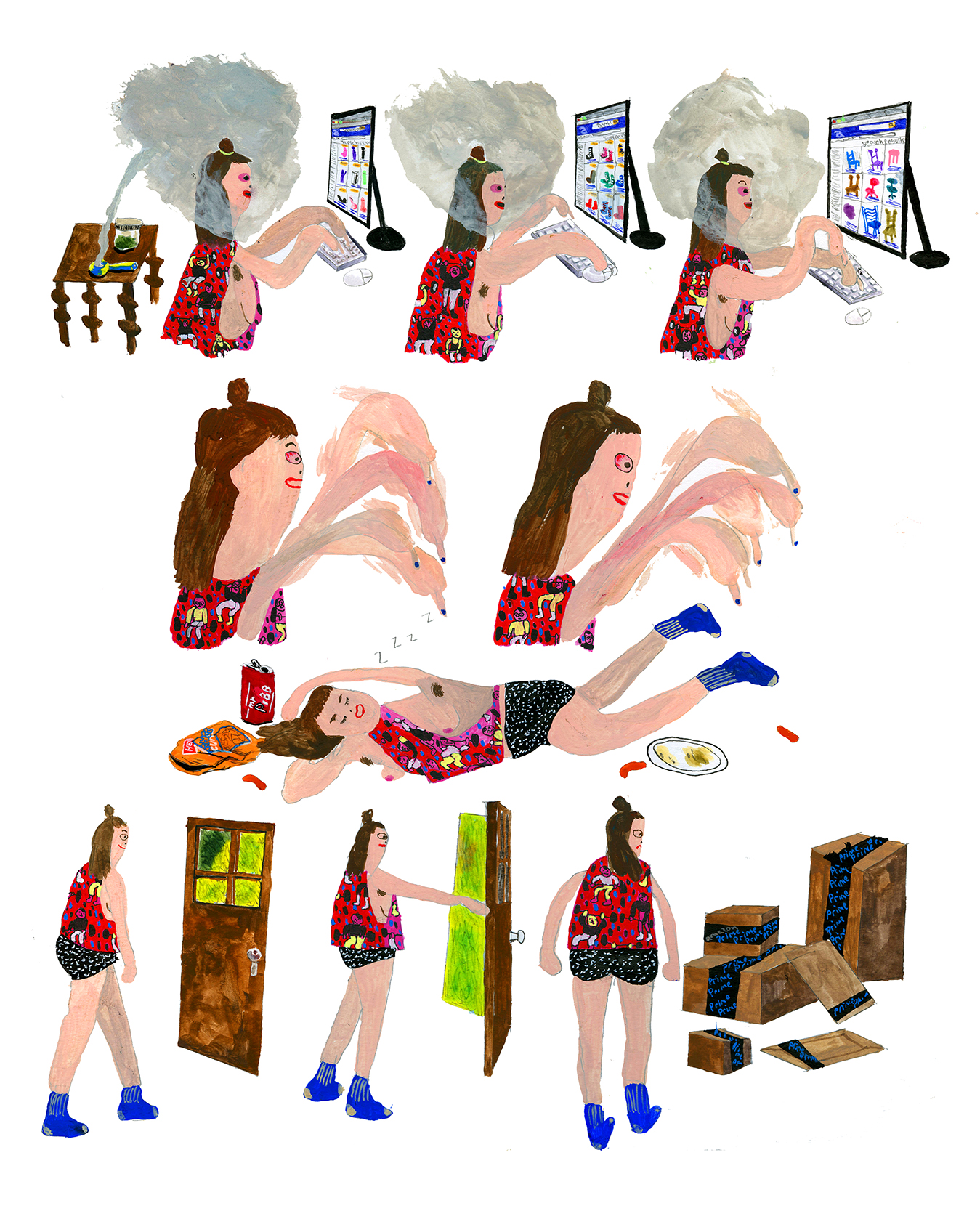 Booth has been admiringly open with her mental health struggles, often sharing her journey with her 88K followers and by doing so, breaks down stigmas that surround addiction and mental illness. The artist’s illustrations are always rooted in her own reality often poking a bit of fun at topics society tends to deem uncomfortable like depression, insecurity, and deciding to live a sober lifestyle. Followers and fans relate to Booth because though heavily satirical, her illustrations are a serious reflection of what it means to be human, or flawed and vulnerable. In most cases, we all use comedy to cope with pain, and of course, sharing a laugh is the easiest way to connect with others, which has a garnered Booth a strong following. I had the pleasure of talking with Booth about the expectation of art, moving to Portland, and finding meaning in life after you’ve hit your rock bottom. 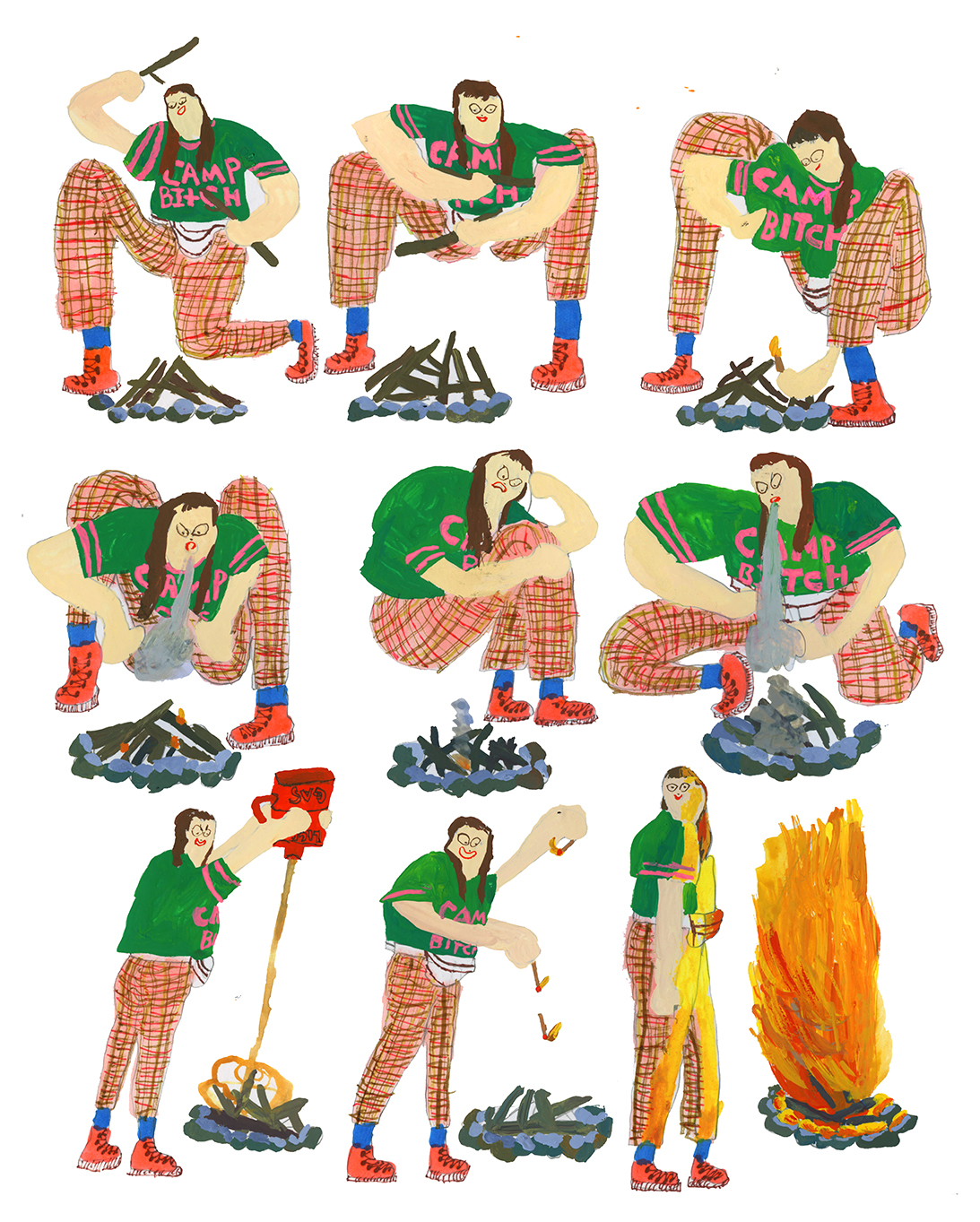 Can you tell me a little bit about yourself and touch upon your initial career as an artist?

Sure! I’ve always known that art would be at the center of my life. I’ve kept sketchbooks and illustrated diaries for my whole life. I studied Painting at Tyler School of Art, and graduated in 2011, totally directionless. Art school left me feeling inept and isolated. It sucked the life and intimacy out of art-making for me, and really turned me off to the idea of getting involved with critics or the gallery scene. For close to five years I worked as a nanny and pretty much gave up on art-making as I sunk into a dark, shame-ridden mental state. During this time I wasn’t producing much of anything, but I did start reading more and more alternative comics. The alt comics scene felt like the supportive, much less hierarchical and commerce-driven community that I had been looking for. I hit rock bottom in 2015. My mental state and alcoholism continued to spiral out of control. I knew I couldn’t survive unless I made a drastic change. I moved across the country to a farm where I worked in exchange for rent, and focused all of my energy on comics. Miraculously, it worked!

You have a really unique style. Visually speaking, how did you find your aesthetic? Or did it kind of just find you (as they say…)?

After four years of art school, and such a negative experience, I wanted to start fresh. I had cultivated so much anxiety about how and what I should be painting. The anxiety prevented me from feeling comfortable putting pencil to paper and I felt paralyzed. When I moved to the farm, away from the perceived judgments of people in the city, I decided to start from scratch and make work from a place of authenticity. No rules, no imitation. At first, it was really uncomfortable, but I’ve learned that once art became fun for me again, I began making it regularly, obsessively. And when you spend a lot of time on one thing, progress comes naturally, and my work got better. 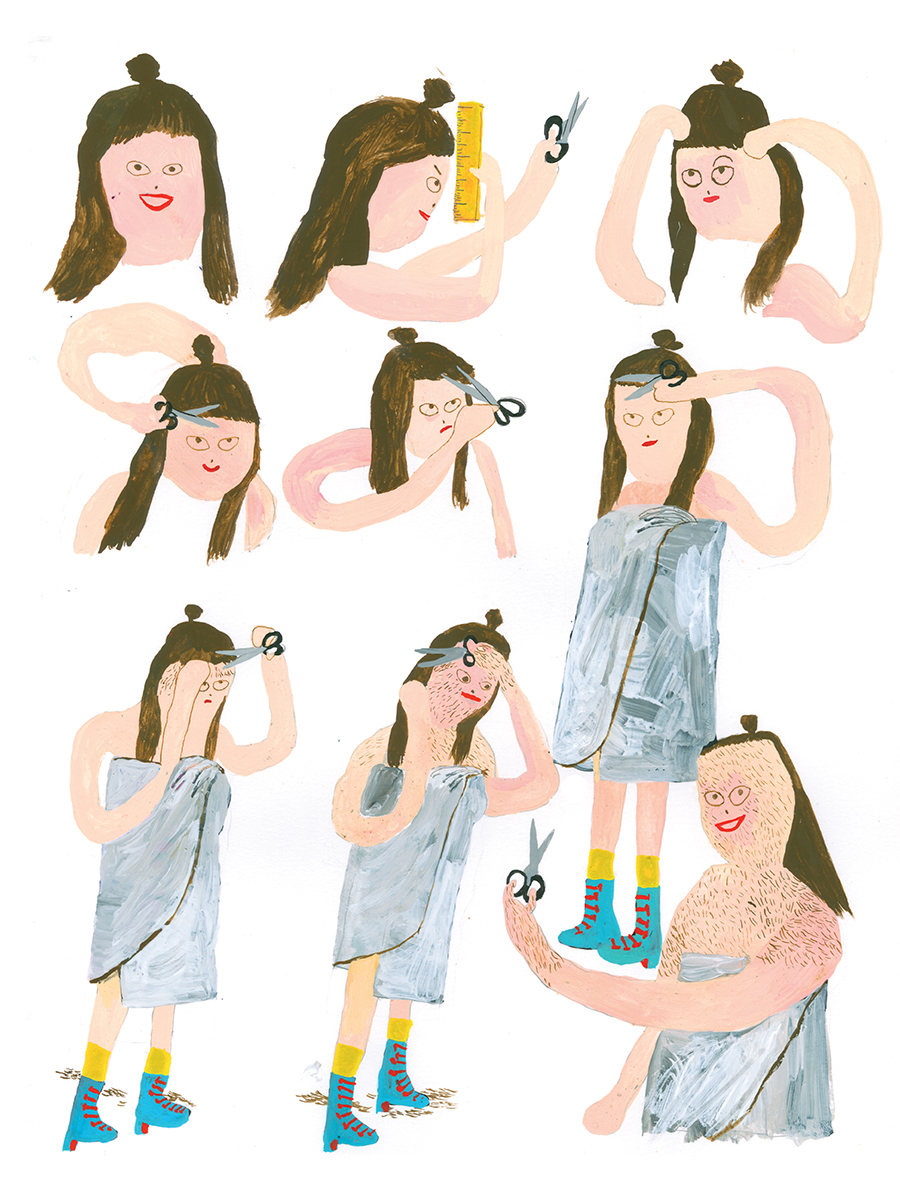 Your work pokes fun at dark subjects like insecurity, addiction, self-loathing, etc., I’m wondering if these themes have always been present in your work? Did you ever have a moment where you were nervous to put something out because it is so deeply personal?

I never felt like I had a choice in this. Using my imagination and developing creative ideas doesn’t come naturally to me. Making work that’s rooted directly in my reality has always felt much more direct, and that directness is in line with how I had been training in my journey away from academic art-making into what I consider to be authentic expression. It’s also been so therapeutic! My insecurities had been killing me. By embracing and owning my issues, I found acceptance within the community and pulled myself out of the shame-pit. It’s also easier for me to think about pursuing a career in arts if I feel like my work benefits others in a very clear way. I always felt it was important to find balance in creating a life where I pursue my passion, while still making it a priority to help others in some way.

I read you moved to Portland in 2015. How did the move affect you creatively?

Yep, the farm was just outside of Portland. I left the farm after a few months and found that the sense of anonymity that I felt in a new city gave me the freedom to create a new narrative and make big changes. 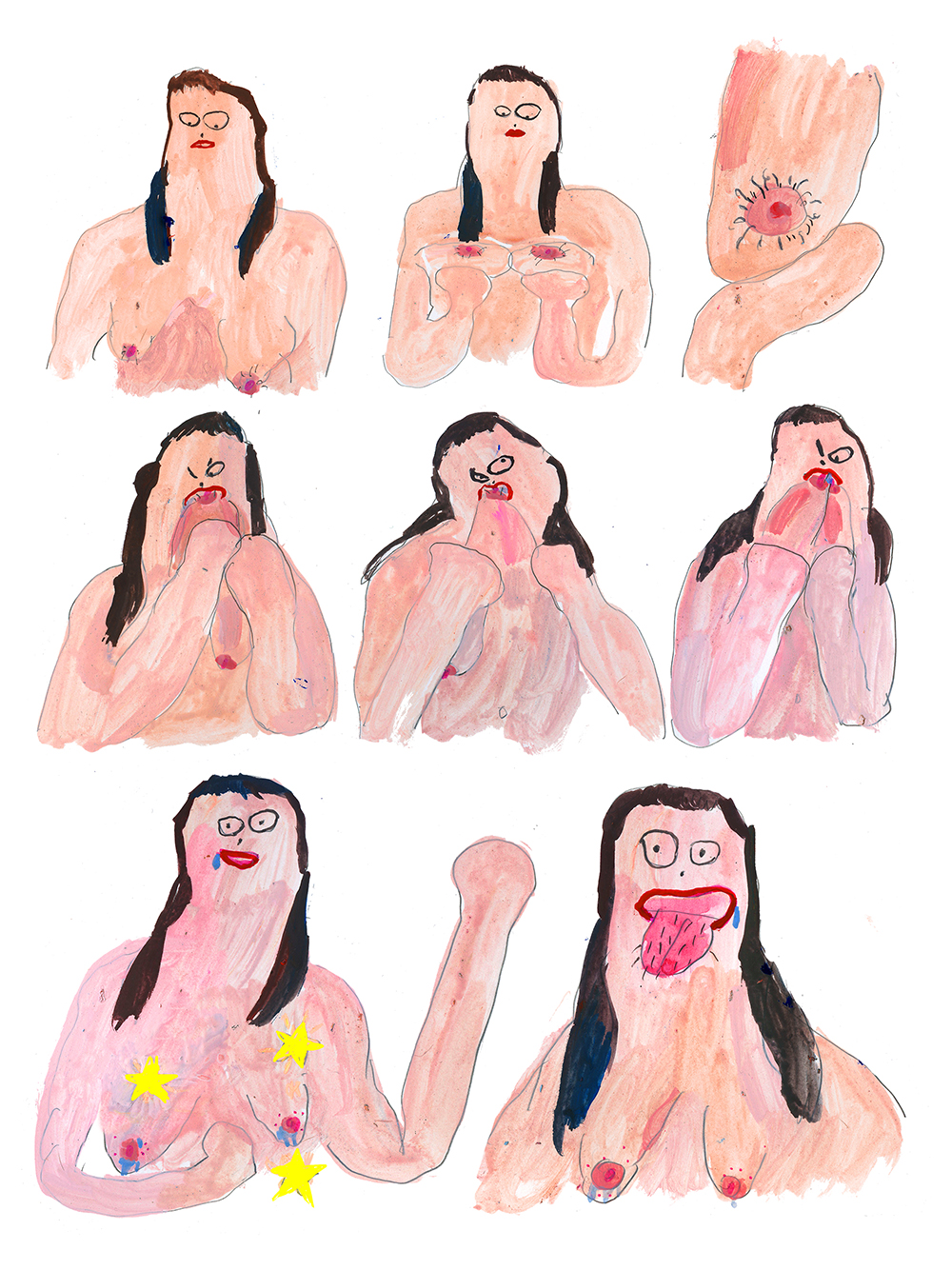 Your comics talk a lot about getting sober and suffering from alcohol addiction. As a sort of “public figure” (considering you have 88K followers) were you nervous to put that information out there? Why do you think it’s important to share your story with your followers and fans? As someone who’s seen a lot of people suffer from alcoholism, I think it’s incredible to break the stigma and freely talk about getting sober.

I was nervous! Everybody and their uncle uses social media now, and trust me, I wasn’t psyched when I got the phone call about my grandmother’s concern. But, as I described before, I felt it was necessary for me to be completely transparent about who I was before I could possibly harness the will to get sober. Hiding my issues was driving me crazy. The amount of positive feedback that I received when I started to open up about my struggles with mental health and addiction was phenomenal. I wasn’t alone. When it feels like there’s no one else out there who can identify with what you’re going through it’s easy to let your problems envelop your life and define who you are. I never envisioned that it would be possible for me to function without drinking, but by following along with other people’s sobriety stories via social media, the possibility of sobriety started to feel like a reality for me. Once I was able to make the change, I knew that I wanted to be that inspiration for someone else and I wanted to do it in a way that felt approachable and not candy-coated.

Did you notice a distinct change in your art when you became sober?

It’s been a lot easier to work, that’s for sure. Making art was also a great way for me to process the extremely uncomfortable feelings that come with early sobriety. My sobriety and success as an artist have continued to feed off each other and equally impact my ability to develop confidence and a sense of self-worth. 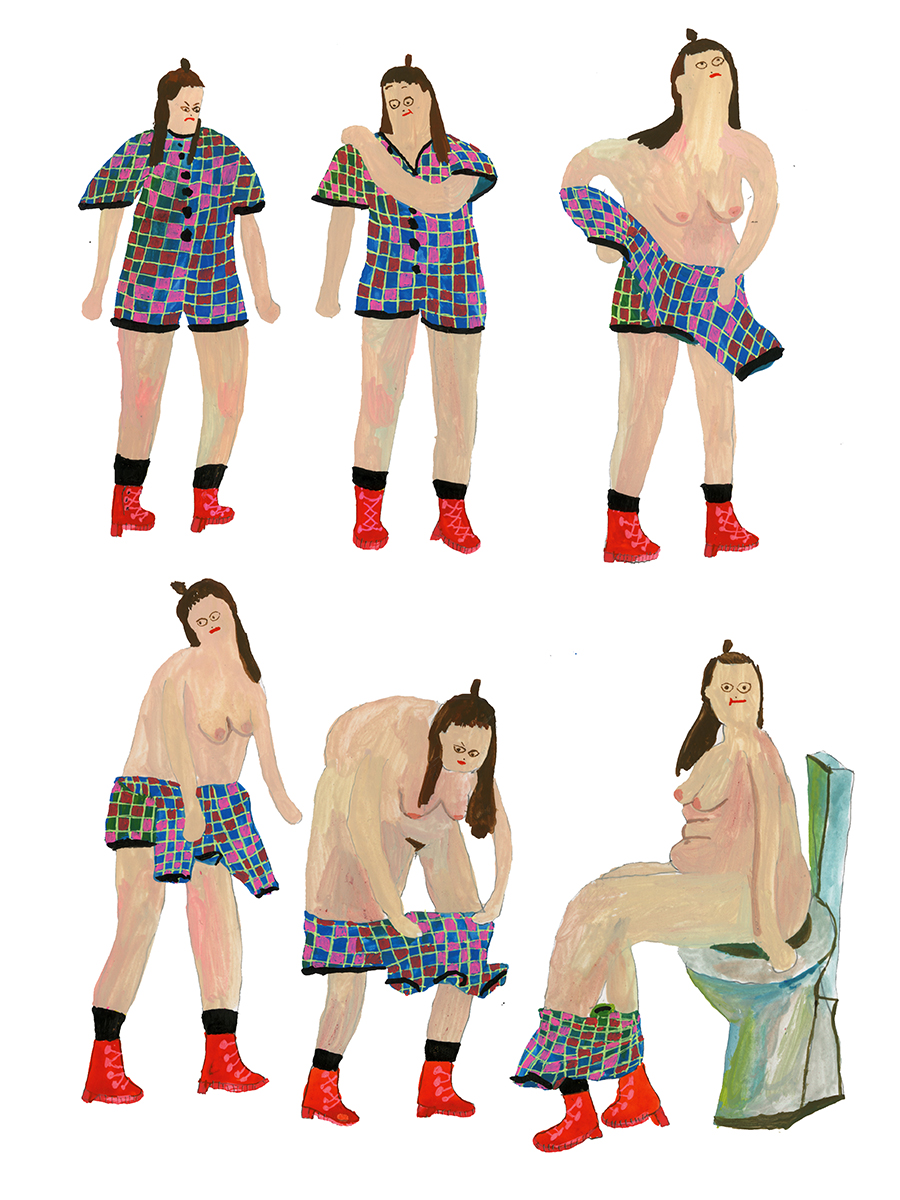 What do you hope people take away from you art?

I want people to feel ok in their own skin, and know that it’s never too late or too hard to change the direction of your life. I also want to inspire more people to make work, and understand that great art doesn’t need to stem from any kind of professional training, just keep making stuff!

Do you have any advice for creatives who have hit a roadblock?

Just that it’s normal. That seems to help me. I have a weekly, “It’s finally happened, I’ve officially run out of material,” crisis. I try to remember how I’ve been telling myself that for years, and it never seems to be true. The best ideas emerge when you’re not stressed out and focusing on finding them. Go do something else, try something new, maybe something physical, or read; you’ll be pleasantly surprised by what pops up. Or maybe you won’t! I’ve gone months without making work and THAT IS OK! Your worth is not dependent on your production. 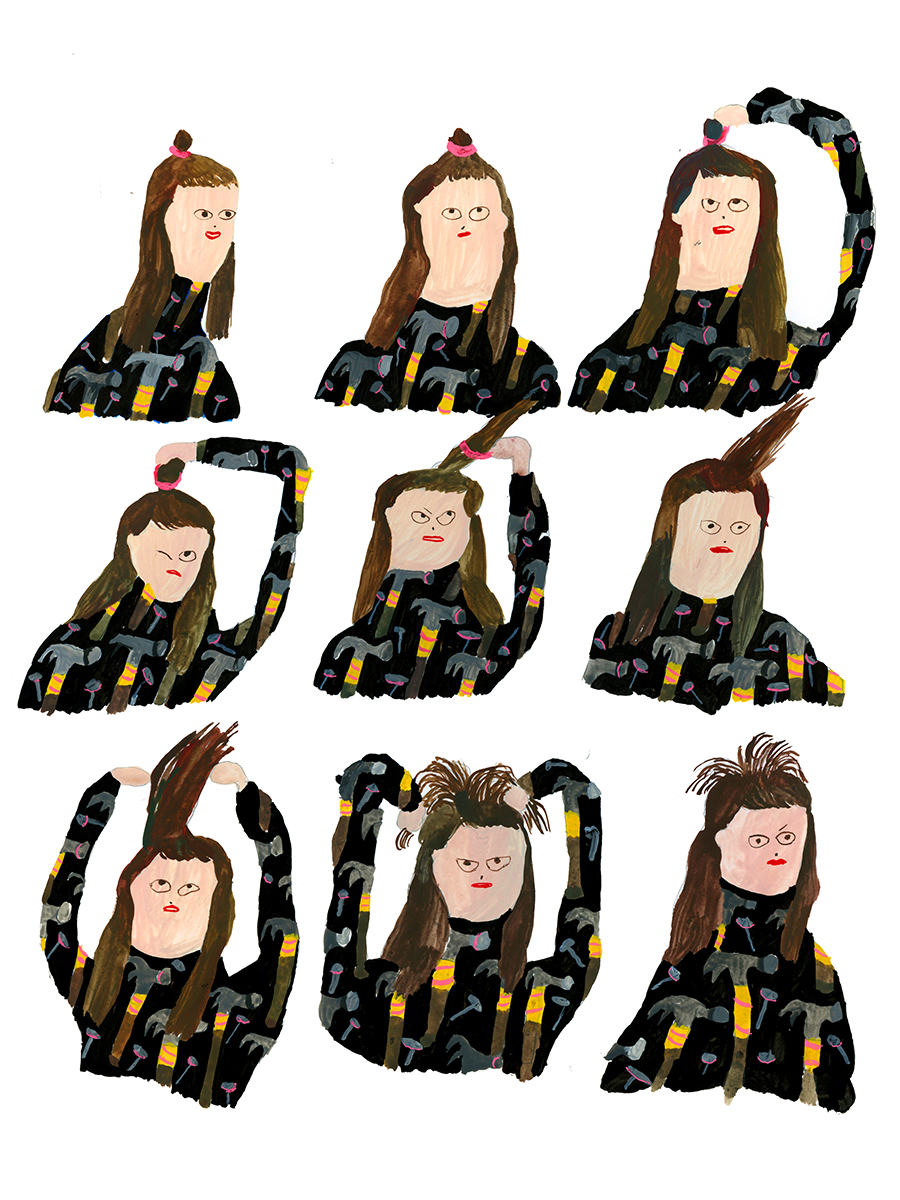 Is there anything coming up that we should be on the lookout for?

Yeah! We’ve spoken a ton about sobriety, so this feels topical. “DUI” is going to be reprinted by Colorama next month. It’ll include a little epilogue about my path to recovery. I’ll also have a new comic called “Cabin in the Woods,” which is due to be printed (also by Colorama) in May.