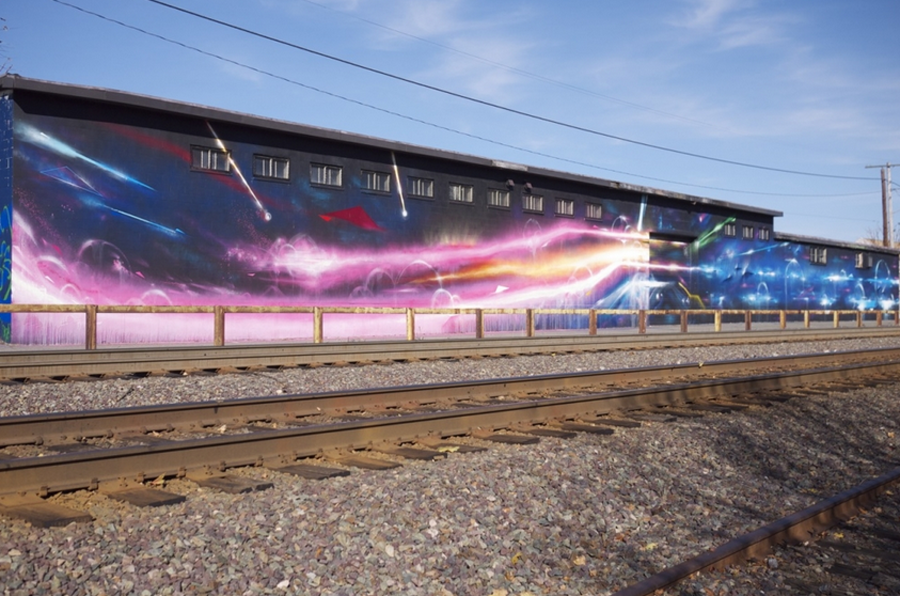 Dana Woulfe grew up in rural Rhode Island – a graffiti-art desert, if you will – where tags were few and taggers even fewer. After moving to Boston in ’97 to attend Mass Art the graff-inspired artist found his craft and his niche, expanding on the art rather than complying with it. “My art is referencing graffiti, it’s not a piece of graffiti,” says Woulfe, now an accomplished full-time artist working out of South Boston.

A 360 of Woulfe’s studio exhibits it all: older, more vibrant pieces beside drip-heavy canvases; a wall of altered triangles and practice spray tags, layered pink, orange and black; collaborators and friends make their own noise in the next space; all tied together with a street-inspired finger-painted mural (no doubt), courtesy of Woulfe’s two-year-old daughter.

At the heart of it is collaboration, something Woulfe learned early on, sharing underpasses and building sides with other artists. In line with that, Woulfe also works as co-mastermind behind Boston’s Studio Fresh, a creative service studio specializing in custom large-scale painted murals. Between SF, clients and a new art exhibit at OneWay Gallery in Narragansett, RI, we had the chance to sit down and chat with Woulfe.

Give me the Dana Woulfe spiel…

I moved up here to go to Mass Art. I was an artist in high school, I always knew it was what I wanted to do – I was always messing around with design. As a teenager, where I grew up [in Foster, Rhode Island], graffiti really wasn’t a thing. There wasn’t a lot of urban atmosphere there. It was kids scribbling under bridges or tagging lockers or whatever, it wasn’t train scenes or a city scene at all. I didn’t have a lot of introduction to it but I was kind of a punk, so when I moved up here I found a bunch of other kids that wanted to cause trouble, but in a more creative direction. And then I got into graffiti and started messing around with that pretty heavily for a few years and ended up, a year or so later, meeting these guys from Project SF, who are also art kids who were doing graff. We all kind of had a bigger concept than just being graffiti crew, like trying to throw events – We did different things like art shows and parties to expose more people to the lifestyleinstead of just the end result of our work.

It was early for that, and we caught a lot of flak in this city, especially from the graff community. It’s funny now, because the same kids who weren’t really feeling what we were doing are now on the other side of the coin trying to get into galleries now. That’s the way it goes.

Yeah, always. That’s kind of the nature, especially after I’ve been doing this for the last 10-20 years, collaborations the heart of all of it for sure.

Especially the way that SF was oriented, it gave me a group to carry outside of school, once I was done with that environment of, ya know, having all your buddies around to check-in on stuff and mentor, foster, promote growth and all that. We had SF, which was good, it was kind of on the check-and-balances system and the collaboration system at the same time. You could always see and be motivated by what your friends are doing, or you can be like, “Is this good? Does this work, what I’m doing?” and have somebody to bounce things off of. It also helped because we were constantly collaborating with each other which stemmed from graffiti walls.

In terms of walls, it used to be that you paint one spot, then eventually we started to mix things up—especially with the gallery and event pieces, we were trying to push ourselves to be more about the art rather than just the piece—and pile things on one another. I It was more about graffiti jams [go check out Montreal’s Rue Saint Catherine!] versus burners. And we would usually be the weirdos doing something a little different than your average graff production. We weren’t always as technically skilled as some of the graff productions, but we were trying to push it in a slightly different way. Those kind of collaborations ended up leading up to all of these collaborations; as artists now, it’s very natural for us to work together on a piece or share a space. I’m always making work with Josh Falk and Kenji Nakayama.

Tell me about the switch to your newer abstract work…

Graffiti definitely brought me to this end result—it’s much more a result of the energy of graffiti and trying to abstract that. Some of my earlier work literally started off as a tag that I would then build shapes off of, so you keep the flow of it, but it ends up being more abstract. And then simplified those concepts and built off of those shapes I’ve been seeing and a lot of those triangles and the directions.

Earlier, I wasn’t trying to make art, I was trying to perfect these different letter styles, and the Boston community, is a very tight community. It’s hard to do anything under the radar. It keeps you humble, let’s just put it that way. So, I was dedicated to the craft for a long time before I even thought about flipping it to art.

I only started doing abstract stuff probably three, four years ago. It was really a result of not having to produce work for sale, to be quite honest. I graduated from college, I worked in design for a minute, and then September 11 happened, and the whole industry collapsed: I lost my job and there was nothing to do for a while, so freelance was the only option, really. I had like three different part-time gigs at a time—one was with children’s book illustrator Marc Brown, it was awesome. I did that for four years and kept myself busy on the side with my graphics portfolio as well.

During that time I wasn’t able to paint like this. It was more about doing what I needed to do for the client, and there was less focus on exploration, unfortunately. And also, I was in my early twenties and I wasn’t as interested as being introspective with my work; it was more about making something look cool and moving on to bang out the next project. After a few years of that Converse hired me and I worked there for almost seven years, but I was able to explore in the studio at night after work, and I wasn’t making work for anyone but myself.

My language developed over that time. I started getting known for the abstract stuff; people were starting to notice it. I quit Converse and tried to make a run at it again with this new language. If someone wants a Dana Woulfe on their wall, I’ll paint it, but otherwise it comes into Studio Fresh and we design and paint it.

What type of following does your abstract work attract?

It’s almost like I’m making art for other artists—for my peers, who I respect and look up to and I’m inspired by, and that’s what I want to do, but I’m not really getting the public’s buy-in on this. [The pieces are] not personal. Well they are, but it’s just energy; it’s color. It’s not a personally attached image.

It’s all an experiment, seeing what different work brings, as far as attention. I really enjoy doing work for my peers rather than selling a billion of these, quite honestly. It means more to me. It’s still why I started doing this work: to make something that I respect and that is respected as kind of defining new space. It’s not as exciting for me to make something that I can already see. I like to kind of figure it as as I go.

Since I started being a full-time artist this is my language but I don’t put any constraints on myself; I think growth is important, I have to be able to evolve what I’m doing in order to be an artist. Triangles for the rest of my life would get really boring – they’re already getting boring! 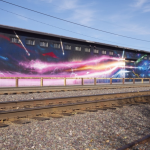 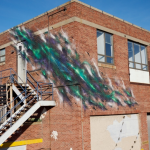 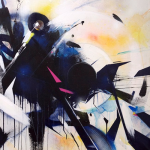 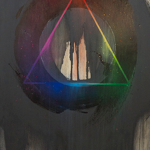 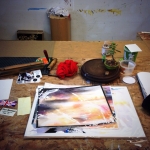 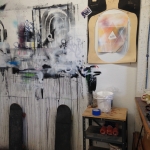 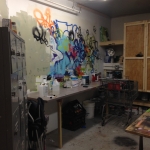 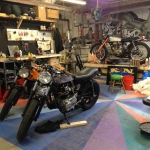 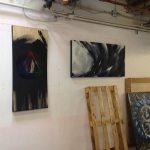 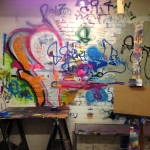