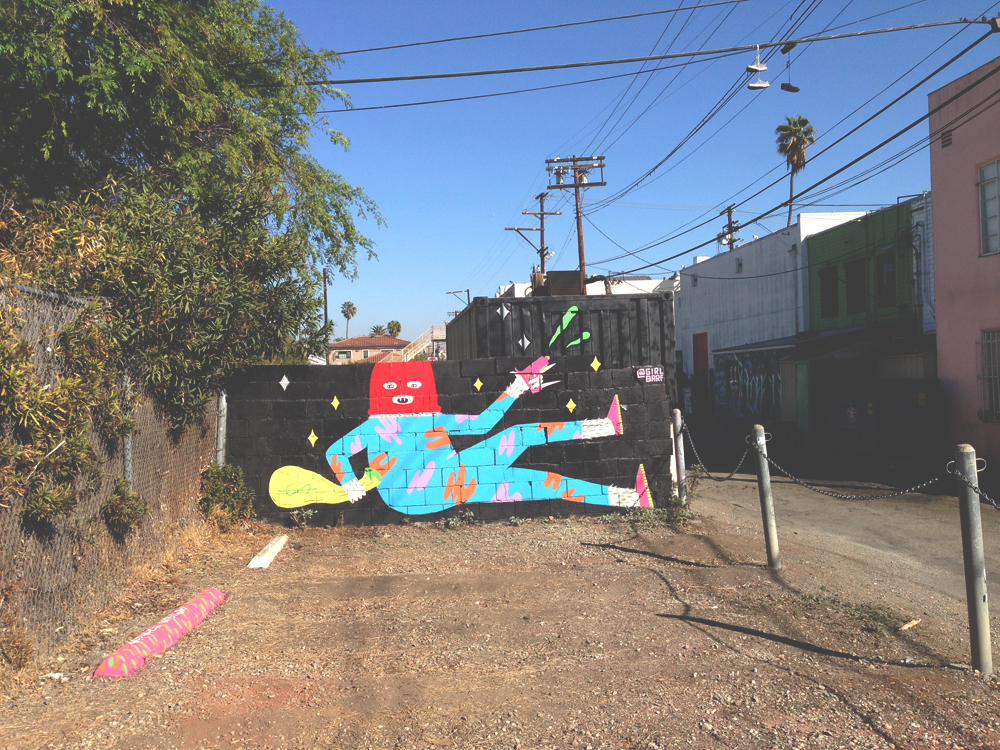 Gabby Gonzales may be one of LA’s freshest young guns running around the city’s streets and throwing up wacky, colorful murals. The designer turned street artist may have only got her start spray painting the sides of buildings and walls in downtrodden alleyways nearly a year and half ago, but here squiggly-looking cast of characters, which are contrived from the stoned skateboarders and drunk hippie bums she runs into on the Hollywood streets, are a direct response to  being out and about in the city.

Gonzales’ murals and paintings reflect the time she spends with all the freaky and interesting people who live in Los Angeles. From the guy blatantly peeing on the side of a dumpster on Venice Boulevard, to the hipsters that traipse through Silverlake, Gonzales looks to this melting pot of types to influence her art.

You didn’t always use spray paint and make street art, what kind of art were you making before?

When I was in school, I did a lot of design and bookmaking, and some very light drawing. When I got out of college that wasn’t working for me. I wasn’t enjoying what I was doing. I started working at Blick Art store and playing with spray paint with some friends and realized I liked it. I was kind of good at it, and just haven’t stopped.

Have you ever gotten up on walls illegally, or have you always done walls that you’ve received permission to do?

I started out doing walls with permission, on yard walls and ones my school gave me, but actually, as I’ve gotten better, I’ve felt more inclined to do stuff illegally. I don’t do it that much right now, but I definitely like to hit it up and doodle and be stupid illegally sometimes. The things I do illegally are nothing to the caliber of my mural work. They’re always doodles, something that is obnoxious; the essence of what I wanted Girl Barf [her street art pseudonym] to be, which is just kind of annoying and in your face.

What’s your definition of the perfect wall? Where would it be located?

Oh, my perfect wall? I think I saw it recently, actually. It was at the LA Skate Shop off of Santa Monica Boulevard. I want that wall super bad. I really like walls that are shaped obscurely, but still easy to see. I don’t really care if the wall is janky or half falling down, or weird, it’s more about the space it’s in more than anything.

What’s your favorite wall that you’ve painted so far?

I paint at Murphy’s Ranch pretty often. I recently did one there of this tall gangly dude. That was a more recent one, and was fun to do. One of my more favorite walls is this weird walking dude, painted down a very narrow, skinny black wall that I did in an alleyway behind Blick. He just has a gun and a stupid red big mouth on.

Mine are all reactionary to the people I know in real life. Being an LA native and working and making art in LA, I run across all of these crazy characters from skateboarders and stoners to crazy hobos. My characters are a fusion of these real-life people’s essence and energy, mixed with my reactions to them. So it’s more like a reactionary experience to me, just being out and about in the world. That’s why all my characters are usually flipping you off or getting drunk while skating.

You use a lot of bright colors, pink in particular. Where do you get inspiration for your color palette?

I’m extremely color conscious. Let’s say I see a high fashion magazine spread, I’ll snip that out and sample it in Photoshop. I started working with one of my friends at Blick who uses a lot of primaries, so he inspired me. I don’t really know when I started using color. I was just really fascinated by how colors worked together. I don’t really use a lot of lines, so I just like to sample colors all over the place and put together as many as possible. All of my sketching is done in neon sharpie and felt-tip markers and things have progressed from there. Painters and other graph writers and lots of fashion inspires me too…once again, it’s all very reactionary to my world and the people I’m around.

When you have a huge wall in front of you, how do you go about starting? Do you sketch something out first, like small scale, and then go at it?

Yeah, I totally do. My process is about 90% drawing because I just love to draw all the time. I’ll do like fifty drawings and then from that I’ll find a character or a couple of characters that I want to put in, that I want to make big, maybe 10 feet tall. From there I’ll put together a composition, lay out all my stuff and pick the colors, then I go directly from that sketch to the wall and place it as best I can on the space I’ve got, which then involves all the sketching with the paint and blocking out my colors, and all my cuts. It seems immediate and spontaneous, but I definitely have a couple steps I go through.

Since you’ve been creating art in the streets primarily, and not doing the whole design thing, have you seen your work evolve?

Definitely, I’m more willing to take risks and be silly, which some say that people don’t want to see or isn’t “sellable.” I don’t know, it just makes me happy, and I’ve seen myself free up so much. I live by the philosophy of “bad drawing forever.” I love my stupid squiggles and my “best” paintings the same. Both sort of have that feeling of not caring. Before, I was too uptight. Now, I go for what I can. I do the best that I can and I’ve found that my work turns out way better. I enjoy it a lot more.

I feel like street art, and getting up or bombing walls is very much a male-dominated arena, you know?

There are some girls in LA that are seriously rockin’ it, like Annie Preece and Sand One, but the amount of women to men is strikingly uneven. What’s it like going into and creating in a male-dominated space?

It’s kind of weird because in the illustration world there’s a lot of women, but being in street art, I was sort of brought into it through some friends and some guys that were cool, and they still are, but I do find that it’s a “boys only” club. The guys might want to paint with you and hang out a little bit, but you’re not really in it if you’re not a guy. Which makes it difficult to get up and it does discourage a lot of girls. Even the female painters that I do know and that I’ve met, they’re really cool, but we’re not a strong community right now.

There are some communities of female artists, but I feel like being a young female artist in this male-dominated street scene, I sort of crave a more close knit female community. It’s hard to find.

You think what you’re doing is somewhat paving the way for other girls to get into it?

I’m sort of at the beginning myself. I’ve only been doing this a little over a year and some change, and I’ve found it can be discouraging at times, but I just love it so much. I don’t want to stop and I’m hoping that my willingness to keep going even if I don’t have a huge support system will encourage other people. I paint in public spaces, or do live painting at Blick and I do get young girls from the neighborhood who have seen me paint say, “That’s really cool,” or “I really like that,” or “I didn’t know you could even do that.”  When they see me doing it, they think they can do whatever they want as well. I’m hoping other girls see that they don’t need somebody holding them up to do it, that they can just do it themselves.

Why do you think LA is such a great place for street art right now?

Well, LA lifted the mural ban, which I think is it’s main renaissance in street art. This might sound negative, but it’s a big melting pot or cesspool of like grime and filth, but also really upscale stuff and people who are interested in culture and politics and art, and I think it’s just the perfect, sort of weirdly apocalyptic, thrown-together city that calls for that stuff because they do have so much crime that they do want to put something else up, something worth looking at. Even if you’re the dopest dude, your murals might be down in less than a year. So that leaves a lot of room for change, and I think that’s what LA is all about.

Do you like that element of street art, where you could throw up a mural and a few days later somebody could have painted over it and it’s gone?

I thought I might be more sensitive to it, to my stuff getting taken down, but actually it goes along with that theme of me being more free to make, not sort of “bad” art, but quick characters and just throw them up. The impermanence is the fun part because it does challenge you to find more spaces and get up more often. I’m always curious to see what goes up over mine.

What are your thoughts on all of the wheat paste going up these days?

I think it’s a really cool dialogue. You can see corners that are overrun with the wheat paste and it feels like a conversation. Some of them are reactionary to each other or they’re placed well together, or some people call for collaborations. I know the Bleep Bloop did this really cool thing where he put up his own character then put a “collab here” sign. So it’s like a weird illegal dialogue between all of these people who may or may not know each other.

I know you like to experiment with a lot of artistic mediums. What have you been working on lately? Have you been dabbling in anything new?

I’ve been doing more painting on canvas, and a little more collaging on canvas. I’ve never really done that, even when I was in school. I didn’t like painting. I was afraid of it. So now my whole goal is to see if I can translate my mural work to a smaller format, but with the same energy. I’m working on some small wood panel paintings. I see so many street artists ending up in the gallery world, and I like that, I think that’s an interesting format for street art that I’m maybe interested in pursuing myself.

What kind of paint are you for your canvas paintings?

I’m pretty much exclusively using acrylic paint. I’ve found myself doing more singular, isolated characters, and less busy-ness going on, and more typography painting. I don’t paint letters on walls, but I paint letters and words and typography on canvas, which is interesting. So that’s like the next wave of what I want to do on canvas.

So what’s currently inspiring you? Music-wise, other artists, anything you’ve seen in magazines.

I’ve been really into listening to Iggy Azalea and making work and feeling like a lady-pimp, just wearing crazy colors and trying to embody my work, and being inspired by other women who embody their crazy characters. 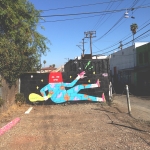 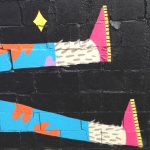 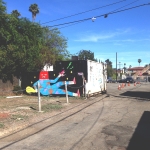 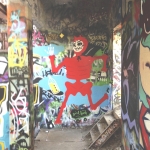 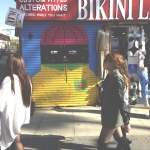 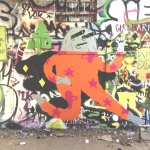 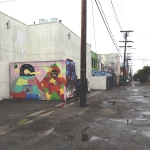 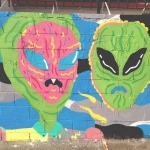 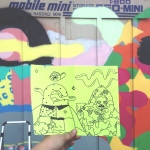 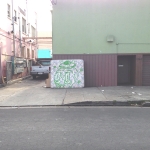 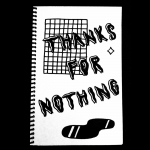 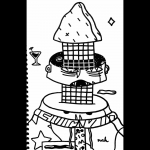 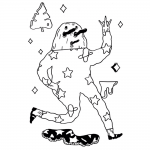 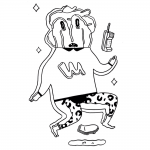 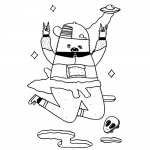